In What May Be One of the Largest Historic Gatherings of Former “Star Trek” Actors, Over 25 Stars and Guest-Stars from All Five of the “Star Trek” Series Will Be in Attendance for SNEAK PEEK WORLD PREMIERE  of “Unbelievable” ON THE EVE OF THE 50TH ANNIVERSARY OF “STAR TREK”.

The Sci-Fi Parody Adventure feature film “Unbelievable!!!!!” will have its World Premiere at a Sneak Peek Industry Screening in Hollywood at TCL Chinese 6 Theatres at Hollywood & Highland, in Hollywood, CA, on Sept 7th, announced husband and wife filmmakers, Steven L. Fawcette and Angelique Fawcette. The film was written and directed by Steven and produced by Angelique under their Archangel Films banner.

The star of the film, Kirk Stillwood, a puppet created by the Chiodo Brothers, who created all of the “Team America: World Police” puppets. Kirk Stillwood is voiced by Kevin Carlson. The film also stars forty former “Star Trek” actors from all the “Trek” series and two movies!

“We wanted to create a unique and original film that sci-fi fans can watch again and again, celebrating their love for this iconic TV show. It is a Sci-Fi Parody Adventure, which uses none of ‘Star Trek’s’ intellectual property, with a cast of over forty former stars of the shows in a zany parody, along the lines of ‘Airplane!’ and ‘Mars Attacks!’,” said Steven L. Fawcette. “I hope the five exclamation points in the title “Unbelievable!!!!!” convey the film’s comedic sensibilities,” he added. 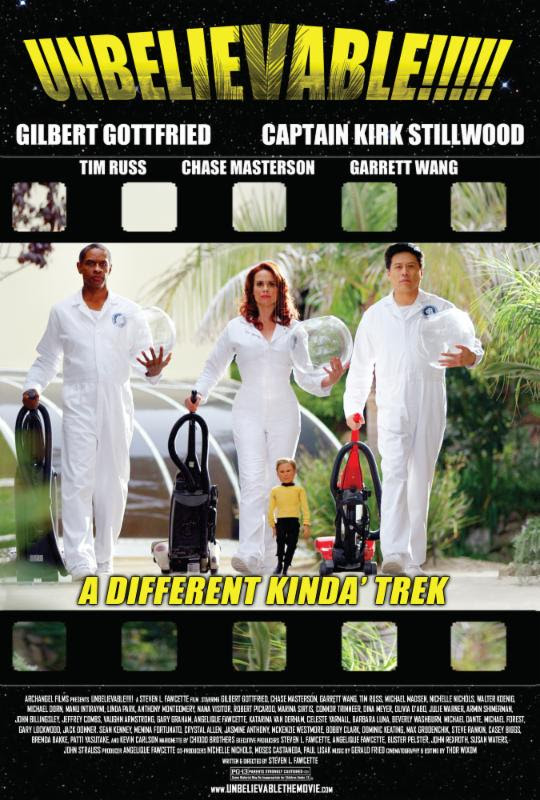 “As an Independent Film Company, we at Archangel Films have worked tremendously hard on this film, and that work has been a gift. Working with the talented cast of 40 ‘Trek’ stars as well as two ‘Trek” — The Original Series iconic musical talents was an amazing experience,” said Angelique Fawcette.  “I hope that fans, who are used to seeing these actors in more dramatic roles, will have some fun and laughs watching the exploits of a Puppet hero and dozens of their favorite stars in our slapstick parody adventure,” she added.

In addition to the many recognizable faces in “Unbelievable!!!!!,” most “Star Trek” and sci-fi fans will recognize the name Gerald Fried from watching the TV credits roll by countless times. Fried, an Emmy-Award winning composer, scored the film. Fried was a composer for the original “Star Trek” and has written some of its most iconic musical themes, including “Amok Time’s” Fight Music. Fried won his Emmy for his Composition work on the 1970’s TV Series “Roots.”

Additionally, Tommy Morgan, was the Lead Bass Harmonia player on the film’s score. Morgan also worked on the original “Star Trek” series episode “Spectre of the Gun.” Multi -Grammy and Academy Award winner Dave Grusin is the Pianist on the score. Grusin is known for his work on “The Graduate”, “The Fabulous Baker Boys” and “On Golden Pond” and “Tootsie.” Also joining the musical talent is Ross Garren who plays the Slider Harmonica. 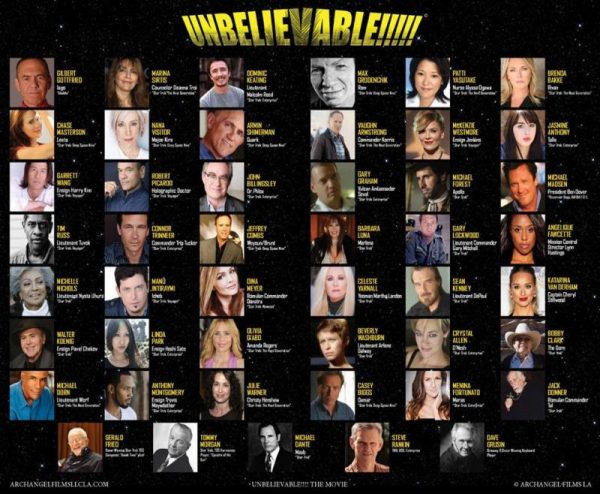 “Unbelievable!!!!!” is a Sci-Fi Parody Adventure. The movie follows the crazy exploits of four astronauts (one is an animatronic marionette which resembles the character “Captain Kirk” from the 1960s TV show “Star Trek”) who travel to the Moon on a rescue mission to determine the fate of two NASA comrades who have not been heard from in several days. The individuals they find at the Lunar Base are not whom they appear to be and, through acts of trickery and deception, nearly succeed in killing our heroes. The four return to find that everyone on the planet has been transformed into a variant life-form. Aliens from Mars have conquered Earth and now seek to destroy the last remnants of humanity. The astronauts fight back and soon discover how to rid themselves of the alien threat. 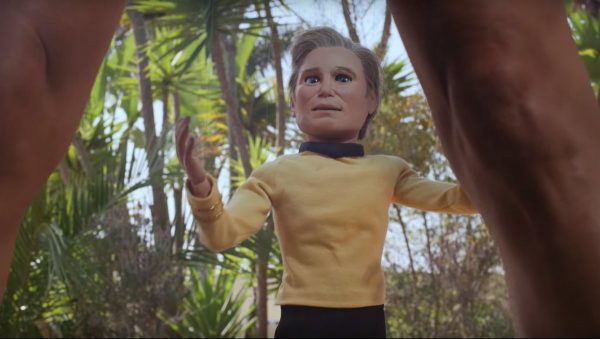 ARCHANGEL FILMS LA, LLC is an independent film company based in Los Angeles, California, looking to create quality action and comedy films with an esoteric and a thought-provoking edge.