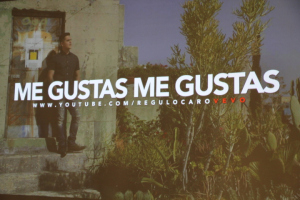 “Me Gustas Me Gustas,”

Bell Gardens, CA, based DEL Records, the leading independent U.S.-based Latin Entertainment company showcasing Regional Mexican music in the U.S. and Mexico, held a press conference and private media screening at their record label headquarters on Thur. – June 18 th , with their exclusive recording artist, Regional Mexican singer and songwriter Regulo Caro, who predominately composes and sings narco-corridos (narco culture folk tales), to announce and present the video release of “Me Gustas Me Gustas” (“I Like You I Like You”), the second single of Caro’s fourth and most recent album SENZU-RAH.

After the media screening of “Me Gustas Me Gustas,” which highlights the deaf community in a story about chances, love and romance, Caro, along with the video’s director Omar Torres, and the video’s main cast member David Key Guzman, answered questions, of how the concept and video came to life.

Justino Aguila, Director of Media Relations, Del Records, who was also present and responsible for event, initiated a Q&A (Questions and Answers) and asked how the concept for the video came about.

“The idea came about due to a curiosity I had, I remember watching a biography on Beethoven and learning he was hearing impaired. He was genius of classical music, his music has endured and is timeless, so I thought of how this man could compose all this great music without the ability to hear. I wanted to know how the hearing impaired enjoy and feel the music,” eloquently expressed Caro, who was surrounded by his children who also had roles in the video. “The Beethoven documentary sparked the idea, plus I wanted to do something different than your stereotypical  Regional Mexican video which I have done in the past with the glamour, beautiful ladies, the explicit and very controversial subject matter. This song is very romantic, penned by Jesus Omar Terazon, who is a great composer and friend, he could not join us today, but we send him our regards. This was a great opportunity to show a different and positive side of what we can do, with a genuine and great cause, so I brought this idea to the director Omar Torres, from there the research started and we brainstormed about bringing this idea to life.”

Through a sign language interpreter, Guzman, also expressed how he felt working with Caro, and being the main character of the video.

“I feel like crying watching the video, thanks to (Omar) Torres the director for everything, there have been other videos made for the hearing impaired but in my opinion not like this one, this one has a lot of feeling and emotion. (Regulo) Caro also took a lot of time and interest in learning the sign languages, it was a great experience and collaborative effort,” explained Guzman. “The message I hope people take with them is that they can and should believe, in life anything is possible. Love is possible in human beings.”

The video with dance studio scenes reminiscent to ‘80s classic films such as “Fame” and “Flashdance,” was shot at different locations throughout Los Angeles over a three day period, giving it that urban vibe.

“Apart from directing the video, Torres, was instrumental in bringing the video to life. Part of the process entailed Torres, contacting Instituto Pedagógico Auditivo Oral, a hearing impaired non-profit based in Mexicali, Baja California, where the director enlightened us on the hearing impaired, the types of sign languages, and we also learned the struggles the non-profit has endured, so in order to help, we have decided to donate the proceeds from the video to the organization,” also added Caro.

After the Q&A, the stage was cleared for Caro to perform “Me Gustas Me Gustas,” among a couple of other songs, before taking time out to take pictures and mingle with fans and attendees.

ME GUSTAS ME GUSTAS

THE GRINDER - Court is in session