Smokey Robinson will be honored with the coveted Lifetime Achievement award at the 15th annual “BET Awards” 2015.

During the course of his 50-year career in music, multi-award winning musician Smokey Robinson has accumulated more than 4,000 songs to his credit and his accolades have been recognized with numerousawards including the Grammy Living Legend Award, NARAS Lifetime Achievement Award, Kennedy Center Honors and the National Medal of Arts Award from the President of the United States. He has been inducted into the Rock ‘n’ Roll Hall of Fame, the Songwriters’ Hall of Fame and served as the Vice President of Motown Records, shaping the label’s success and cementing its place in music history. 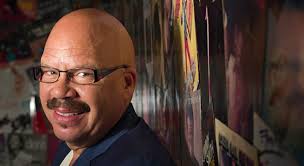 Since the 1990’s, philanthropist Tom Joyner has been the well-known and loved radio host of The Tom JoynerShow which pulls in over 8 million ears across the nation. In 19989, as an homage to his roots, he created theTom Joyner Foundation whose mission is to earmark dollars for students and schools that have run out of moneyand has raised more than $60 million to help keep students in historically black colleges and universities. The Foundation, just like the morning show and his other endeavors, exists to serve the African American community.

Hosted by Anthony Anderson and Tracee Ellis Ross, the “BET Awards” will include performances by Chris Brown and Kendrick Lamar. The star power continues as Michael B. Jordan and entertainer Zendaya will take the stage as presenters during the 15th anniversary of the annual highly-anticipated televised event. Additional names to be announced.

A full list of the “BET Awards” 2015 nominations is now available at http://www.bet.com/awards.

The “BET Awards” 2015 will air LIVE on Sunday, June 28, 2015 on BET and will premiere around the world on BET’s international network on Tuesday, June 30 at 9:00pm BST / 10:00pm CAT and will air live on MTV Australia for the very first time (check local listings).

The “BET Awards” will take place along with the BET Experience at L.A. Live in Los Angeles from June 25-28, 2015.  BET.com/Awards is the official site for the “BET Awards” and will have all the latest news and updates about this year’s show.  All information about the BET Experience at L.A. LIVE presented by Coca-Cola® can be found at BETExperience.com.  The BET Experience VIP Package offers the only way to purchase a “BET Awards” ticket, great seats to 3-nights of concerts at the Staples Center, and exclusive access to events at the free Fan Fest.  For more information and to purchase tickets, go to BET.com/BETX.Follow the Experience on Twitter @betexperience.