Indie pop group Mosquitos have released a new track “Counting The Days”. The song premiered with Glide Magazine who writes, “The song incorporates a melange of captivating sounds anchored by Juju Stulbach’s dreamy voice and a playful, loping bass line. It brings to mind the technicolor psychedelia of the Flaming Lips and the percolating dream pop of Luna while also sounding completely its own.” 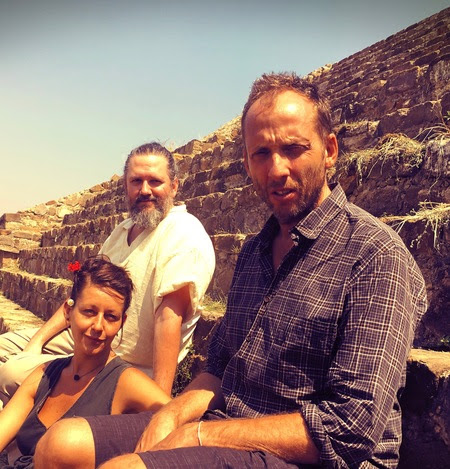 The group has also announced the upcoming release of their new album, Mexican Dust. The fourth full-length record for the band, Mexican Dust will be released via Six Degrees Records on August 18th. The album reflects the diverse and eclectic musical range of the trio, encompassing a unique blend of Brazilian influences, American pop smarts and witty, oddball arrangements.

Mosquitos previously shared the track “This Town”, a synthesizer-infused psalm for the excitement of big-city life that serves as the opening track on Mexican Dust. The song premiered with Brightest Young Things.

A recurring theme on Mexican Dust is the search for a home, one that Stulbach as lyricist addresses head-on in “This Town,” a sudden yearning for her frenetic New York City streets. Stulbach further explores this sense of detachment and longing in “Estrangeira” and the wryly humorous “Island in the Bathtub”.

Mosquitos – singer Juju Stulbach, singer and multi-instrumentalist Chris Root, keyboardist-programmer Jon Marshall Smith – are musical nomads whose songs occupy a mythical place somewhere between Brooklyn and Brazil. After scoring a hit with their bossa-nova inspired song “Boombox” in 2003, the group went on to release two more albums before going on hiatus. An out-of-the-blue offer for Mosquitos to contribute a song to an indie rock tribute album for the 30th anniversary of Fraggle Rock got Root and Smith talking again.

The group ultimately reconvened in New York City to record Mexican Dust with producer/arranger Michael Leonhart, a longtime sideman with Steely Dan who has recorded with artists ranging from A Tribe Called Quest to Yoko Ono. “I find Juju and Chris to be incredibly earnest friends and artists, always searching for new ways of pushing their own boundaries and self-expression,” remarks Leonhart. “They are naturally gifted songwriters who together with Jon have created this unique micro-universe of tropicalia-punk-folk.”

7. Island In the Bathtub