L’Ermitage Foundation, will present Cello Teacher Ruslan Biryukov and his Cello Student Nathan Le, in the World Premiere Performance of their new CD titled, CELLO PINNACLE, on Wednesday, August 16, 2017 at 8:00 p.m. in the Grand Ballroom of the Luxe Sunset Boulevard Hotel, 11461 Sunset Boulevard, at the intersection of I 405, in Bel Air, CA  90049.

Renee Cherniak, Executive Director of L’Ermitage Foundation said, “We are thrilled to present renowned Russian Cellist and Teacher, Ruslan Biryukov and his 17-year-old Vietnamese prize winning Cello Student, Nathan Le, in the exclusive first time performance of their new CD, CELLO PINNACLE, as the next performing artists in our upscale 2017 Summer Concert Series.”

Cellist Ruslan Biryukov said, “This new CD album presents a unique opportunity for music lovers to listen to the evolvement of the approach to playing cello while enjoying the exquisite melodicism of each of the composer’s music featured on the CD, coupled with a clean style of harmonization.  The cello is the instrument most akin to the human voice.”

The August 16th program will consist of:  “Four Fantasies” by Orlande De Lassus, “Caprice No. 9 in B minor for Two Celli, Op. 7” by Auguste-Joseph Franchomme and “Suite For Two Celli, Op. 16” by David Popper.  The new CD,CELLO PINNACLE was recorded in Los Angeles on May 26 and 27, 2017 by Grammy Award-winning recording engineer Matthew Snyder.

This is the World Premiere Recording of “Four Fantasies” composed by Orlande De Lassus (1530 – 1594).  The work is published by Kalmus Classic Edition and Alfred Publishing Co., Inc of Van Nuys, CA.  Orlande De Lassus, a Netherlandish composer of the late Renaissance period, is considered to be the chief representative of the mature polyphonic style of the Franco-Flemish school, and one of the three most famous and influential musicians in Europe at the end of the 16th  Century (the other two being Palestrina and Victoria).  This recording represents a contemporary view of Renaissance music, performed with present days’ vision and instruments, but original sense of style, arranged and performed by Ruslan Biryukov and Nathan Le.

“Caprice No. 9 in B Minor For Two Celli, Op. 7” was composed by Auguste –Joseph Franchomme (1808 – 1884), a French Cellist and Composer.  For his contributions to music Franchomme was decorated with the Légion d’honneur.  He was the most celebrated cellist of his time and contributed to the refinement of the bowing technique—elegant, sweet, and light—which distinguished the French school developed by Duport brothers.  He was renowned for deft, precise, and expressive powers of execution.  “Caprice No 9 in B Minor” is frequently performed at the cello competitions.  Nathan Le performed it as a part of his Tchaikovsky Competition program in 2014, winning 3rd Prize and a Bronze Medal.

“Suite For Two Celli, Op. 16” was composed by David Popper (1843 – 1913), a Bohemian Cellist and Composer.  The five movement piece includes an Andante grazioso; Gavotte:  Allegro vivace ma no troppo; Scherzo:  Quasi Presto; Largo expressivo; and Marcia, Finale:  Allegro ma no troppo.  Popper was a graduate of Prague Conservatory and student of Julius Goltermann (1825–1876).  He was a protégé of Baron Hans von Bülow and Franz Liszt (both notable pianists, composers and conductors). Popper was one of the last great cellists who did not use an endpin (though adopting it at the end of his life).  Popper’s music represents a romantic saloon style of virtuosic cello music, somewhat reminiscent of Chopin and Liszt.

Ruslan Biryukov (Руслан Бирюков) is the Founder of the Glendale Philharmonic Orchestra and Los Angeles Cello Quartet and Artistic Director of Positive Motions Concert Series in Los Angeles, as well as a Professional Cellist and Educator. Biryukov is the only cellist ever invited to perform for 10 consecutive years solo recitals at the Sundays Live Concert Series in the Los Angeles County Museum of Art, the longest running live radio broadcasted concert series in the United States on KUSC 91.5 FM. 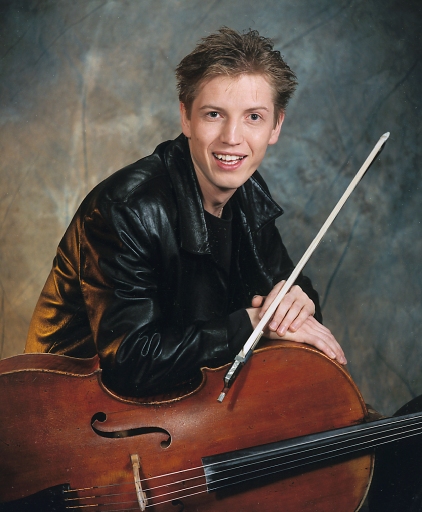 Biryukov was also the only Russian cellist invited to solo with an orchestra during the inaugural season of the Renée and Henry Segerstrom Concert Hall in Orange County.  Recent appearances in the Los Angeles area include appearances with the Redlands Bowl Symphony in Dvořák’s “Cello Concerto,” with the Marina Del Rey Symphony (Summer Series), with the Glendale Philharmonic Orchestra in the World Premiere of “Bestemming:  Concerto for Cello, Orchestra and Narration” written by composer Sharon Farber and with the San Bernardino Symphony.  He has performed with world-renowned violinist Midori at Disney Hall in Los Angeles, with cellist Kirill Rodin at the Tchaikovsky Moscow Conservatory, and with members of the Ysaye Quartet.  Ruslan Biryukov is the co-host, along with conductor Frank Fetta, of “The Cool Classics” radio show broadcast live from LA Talk Live Radio.  He will next be seen performing Brahms “Double Concerto” with Huntington Beach Symphony and Los Angeles Opera Concertmaster Roberto Cani. 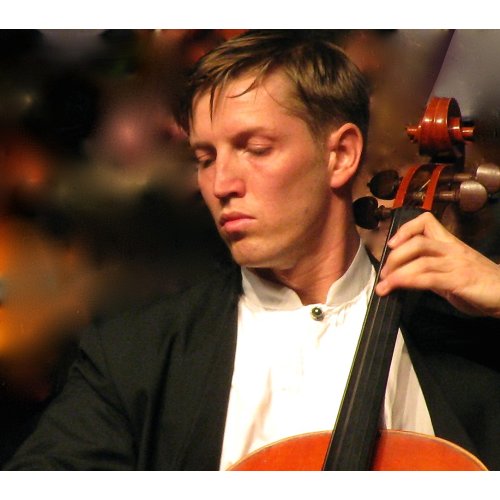 Biryukov has been a master teacher in music festivals in Europe and Russia.  He has held teaching positions at the Ippolitov-Ivanov State Institute of Music in Moscow, Russia; the Music Academy in Lovran, Croatia; and the California Institute of Music in the United States.  His creative artistic ideas are based upon the traditions he learned from esteemed artists Kirill Rodin, Mstislav Rostropovich, Daniil Shafran, Natalia Gutman, Janos Starker, Steven Isserlis, and the late Eleonore Schoenfeld (USC Thornton School of Music, Piatigorsky Chair).

Biryukov is a prominent pedagogue.  Within the last decade of his teaching he has maintained leading positions within the Los Angeles music educational arena.  Many of his students have become successful professional cellists and have been accepted by major universities and music conservatories with full scholarships, including USC, UCLA, CSUF and San Francisco Conservatory.  He has given Cello Master Classes at major universities in the United States, including UCLA, CalState Fullerton, Wichita University and Boulder University in Colorado, as well as at international music festivals in Europe and Russia, attracting many young cellists to study with him from around the world.  Within the last decade Biryukov’s cello students have won over 250 prizes at national and international competitions around the world, including the 8th International Youth Tchaikovsky Competition in Moscow (Nathan Le, 3rd Prize), American Protégé International Competition in New York (Meagan Wu and Stephen Yang, 1st Prizes), American Fine Arts International Festival (Zoe Lavoie-Gagne, Stephen Yang, 1st Prizes).

Born in Baku, Azerbaijian, Biryukov received his formal music education at the Tchaikovsky Moscow Conservatory in Russia (Master of Music, M.A.), and the USC Thornton School of Music in United States (Artist Diploma and Graduate Certificate).  He first earned international recognition by winning major awards in Azerbaijan and by the inclusion of his name in the Golden Book of Russia’s international program “New Names.”  Biryukov has gone on to win numerous other awards worldwide, including the Grand Prize at the 17th Mu Phi Epsilon International Competition.

Since 2003 Biryukov has resided in Silver Lake, CA.  He was awarded permanent residency from the U.S. government as an “Extraordinary Ability Artist.”  The title means that he has “sustained national or international acclaim and the achievements have been recognized” in his field, according to the U.S. Citizenship and Immigration Services.  In 2016 Biryukov became a naturalized citizen of United States.  Additionally, Biryukov is the only professional cellist in the world granted United States Commercial Pilot license and Certified Flight Instructor Instrument single and multi-engine airplanes licenses.  To learn more, please visit, www.celloart.com

Nathan Le made his solo debut at the age of 11 performing Haydn’s “Cello Concerto No. 1” with the Russian State Symphony Orchestra in St. Petersburg, Russia.  Three years later, he became the first California native to become a Laureate of the 8th International Tchaikovsky Competition for Young Musicians in Moscow, Russia.

He is a Cello student of Ruslan Birykov and Ronald Leonard (Colburn Music Academy).  In the fall of 2017 Le will continue his education with Laurence Lesser at the New England Conservatory/Harvard University dual-degree program.  A Los Angeles native and resident of Porter Ranch, CA, the 17-year-old Le has performed with many orchestras in the Los Angeles area, such as the Torrance Symphony, the Culver City Symphony, the San Fernando Valley Symphony, the New West Symphony, and the Dana Point Symphony, performing cello concerti by Elgar, Haydn, Saint-Saëns, and Tchaikovsky.

Le has also performed internationally in countries such as Russia, Austria, and Armenia.  Most recently, the First Lady of Armenia invited him to perform at a music festival commemorating the centennial of the Armenian Genocide.  In addition, in the summer of 2014, during the final round of the 8th International Tchaikovsky Competition for Young Musicians, he had the opportunity to perform Elgar’s “Cello Concerto” in the Great Hall of the Moscow Conservatory with the New Russian State Symphony Orchestra.

Le’s other competition wins include 1st Prize at the Los Angeles Violoncello Society Competition, 1st Prize at the MTAC VOCE State Competition, and 1st Prize in the Rosamonde Laberge Music Foundation Bursary.  He was also a finalist at the American Protégé International Competition, runner-up at the Mondavi Center Young Artists’ Competition, and semifinalist at the Stulberg International String Competition.  He has performed on the L’Ermitage Foundation Concert Series with renowned pianist Robert Thies, and has also appeared on the NPR radio show “From the Top” hosted by concert pianist Christopher O’Reilly at the Mondavi Center for the Performing Arts at the University of California in Davis, CA.  He was also the winner of the 2017 YMF/ASCAP Foundation Leiber and Stoller Scholarship Competition. 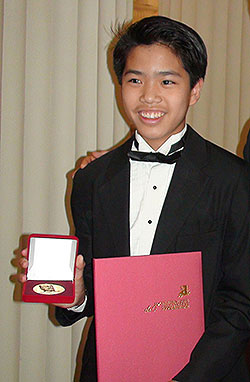 Le has attended summer music programs such as Center Stage Strings, where he studied with Jacob Braun, the Meadowmount School of Music, where he studied with Hans Jørgen Jensen, and the Itzhak Perlman Music Program.  In addition, he had the opportunity at the Meadowmount School to collaborate with the late Joseph Silverstein and other students performing Strauss’s Sextet from his opera “Capriccio.”  He has also performed in Master Classes with renowned musicians such as Gary Hoffman, Robert deMaine, Ben Hong, and Ruslan Biryukov.

As a church musician, Le has been involved with the music ministries of the Laguna Niguel Presbyterian Church and the Presbyterian Church of the Master in Mission Viejo, often performing in their holiday concerts.  Le is also a composer, whose works have been recognized in competitions such as the NextNotes Competition and the National Young Composers’ Challenge.  He was also a student at the Los Angeles Philharmonic Associate Composer Program.  In 2012, he composed his first symphony, entitled “Crisis in Japan,” which was premiered by the San Fernando Valley Symphony Orchestra.

Admission to the concert is a Suggested Donation of $50.00 per person.  Due to limited seating, Advance Reservations for the 60-minute concert are required and can be made by calling the L’Ermitage Foundation at 310-472-3330 or by E-mailing reneelcherniak@aol.com.  Valet parking is available at the hotel.  To learn more about this concert and tax-deductible membership levels for L’Ermitage Foundation, please visit online at http://lermitagefoundation.org

After this debut performance, the CD will be available for purchase online through Amazon, iTunes and Pandora, as well as virtually all other online distibutors.  To learn more about cellist Ruslan Biryukov, please visit www.celloart.com; to learn more about Nathan