What a fantastic year it has been.  I have been blessed to have covered so many extraordinary concerts, films, red carpet events, and theater productions.  However, attending the Brigette & Bobby Sherman 6th Annual Christmas Gala and  Fundraiser last December was one of the highlights because the legendary actor, Sidney Poitier was being honored.  I had the opportunity to photograph and interview Mr. Poitier.  What an honor and a blessing.  Here is my article. Montage Hotel, Beverly Hills, December 19th, 2015.

“We may be oceans apart, but we are one world and we all must work together to make sure children everywhere have the same rights to education and growth,” said Brigitte Sherman.

On this evening at the luxurious Montage Hotel in Beverly Hills, Brigitte and Bobby Sherman hosted an extraordinary Gala and fundraiser to raise money for their Foundation that sponsors an after school tutoring/music program for children in Ghana, and secondly, to honor Mr. Sidney Poitier for leadership and inspiration by giving him The Brigitte and Bobby Sherman Foundation International Leadership Award.

Walking into the reception area, one was transported back in time to Gilligan’s Island and all the characters from the television program paraded around the room.   Mr. Howell greeted me with a big smile holding a drink.  Ginger slinked around in a sexy orange gown as the Professor followed her.  In the middle of the room were the items for a silent auction and at the far end, two sand artists carved an African village.  Brigitte Sherman, donned in a stunning royal blue chiffon cocktail gown and Bobby Sherman, looking dapper in a black tuxedo jacket and pants with a white dress shirt, took the stage all evening long as the exquisite hosts for the affair. 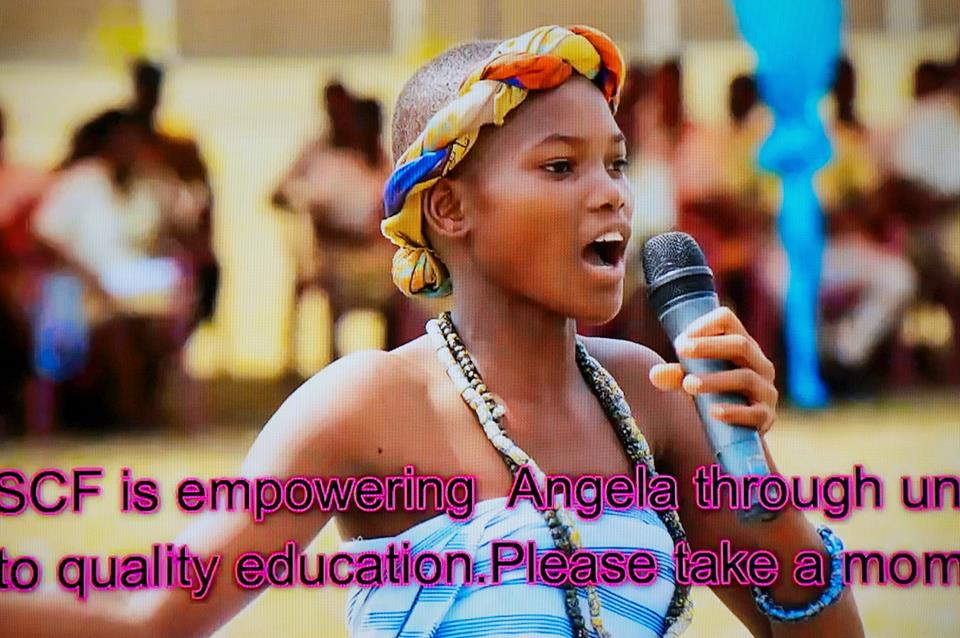 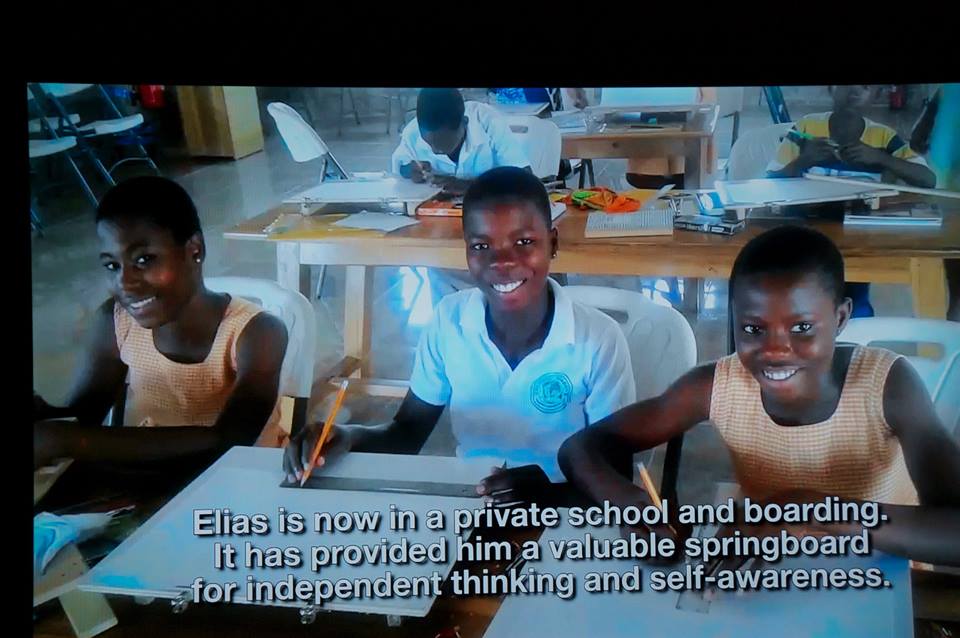 In an interview they talked about their Foundation and the accomplishments thus far.  “We are creating public awareness for children in Ghana in order to provide some of their basic academic needs.  Our program includes tutoring, an after school musical program, and school fees for parents who can’t afford the expenses,“ Brigitte Sherman said.

Bobby Sherman added, “We did a Skype with the kids in Accra, Ghana a while back and talked about the music and drumming with the students.  They were all so excited.  Brigette and I are glad to influence them into thinking about the positive aspects for their lives rather than the   negative.” 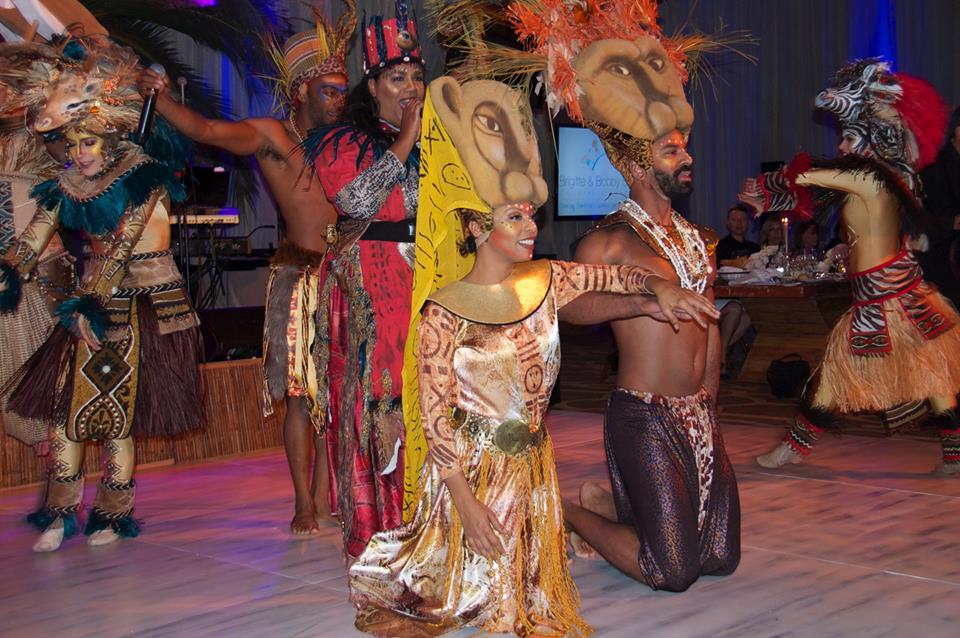 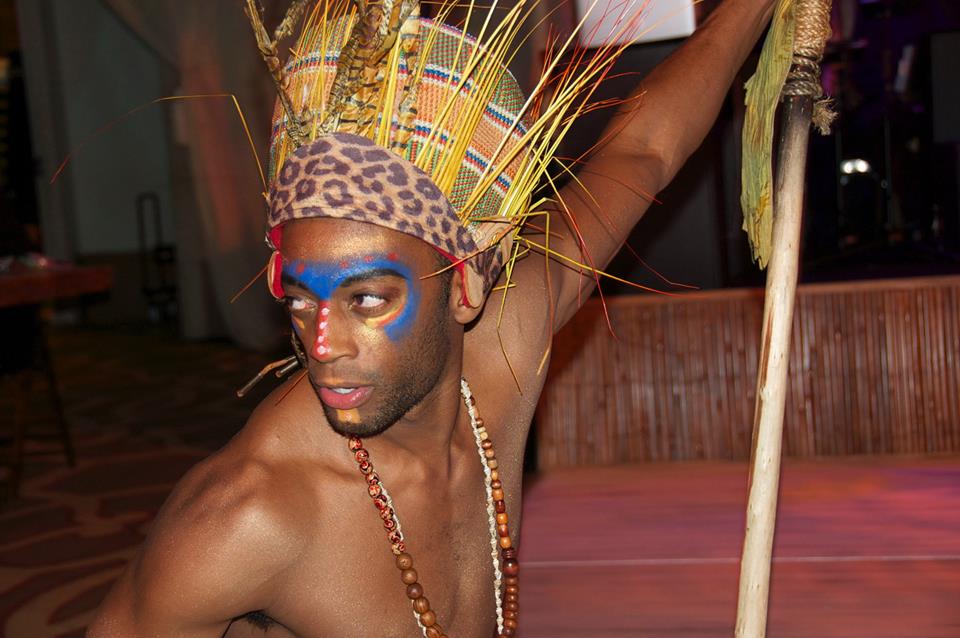 They told a story about meeting an African King who lived in Ghana and invited them to visit him in his country.  On that visit the Sherman’s decided to buy five and half acres of land in order to build an orphanage; however the government denied that request.  Brigitte explained, “We bought 5 ½ acres of land and first wanted to build an orphanage, but the government wanted to hold parents accountable because it would make it easier for them to abandon children.  Instead we were allowed to use this land for an after school program for youth.  The drop out rate for school is 50% so we wanted to give kids a chance to be tutored as well as enrich their lives with teaching them to play instruments and sing.”

The grade point average for the students to enter the program is 84.4 and each one must have a recommendation by a teacher and principal.  “Our hope is that these children contribute to Africa as a continent and break barriers in their education system.” 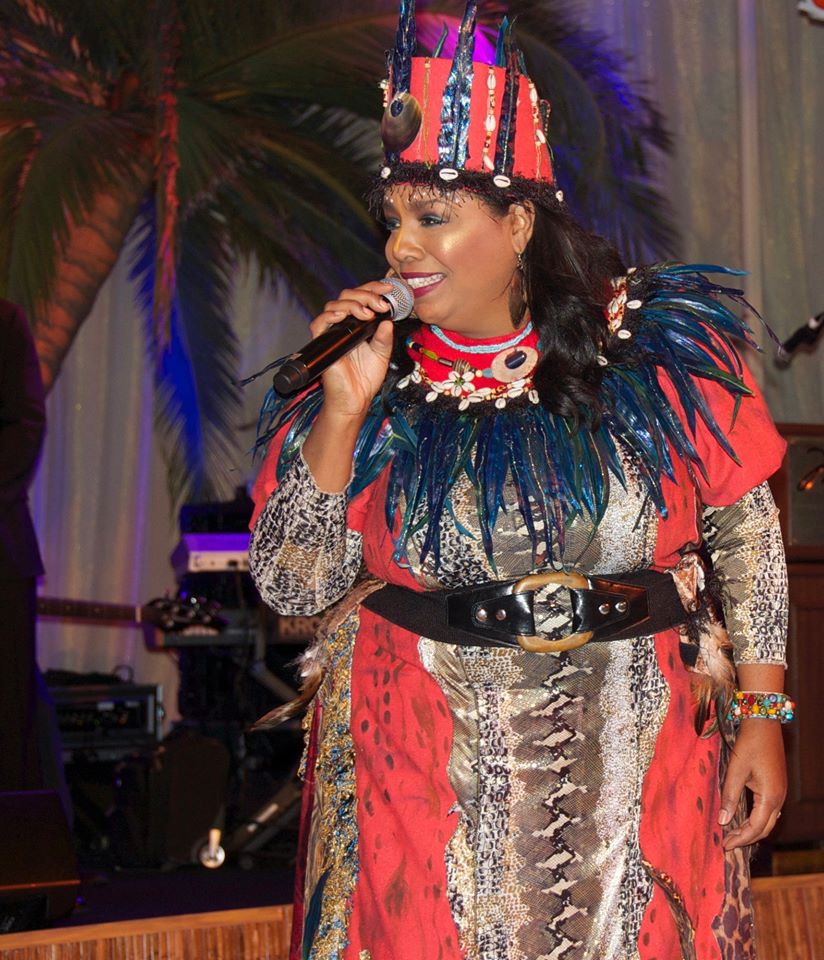 Upon entering the ballroom for dinner, entertainment and speeches, two girls from the famous dancing troupe The Rockettes, dressed in Santa costumes, greeted the guests and escorted them to the appropriate tables.  The room glimmered with white flower arrangements plus dazing table settings and festive holiday decorations all intertwined with the Gilligan Island theme.  The night’s special celebrity emcee was Terrence J, an actor and television personality and model best known as the host of BET‘s popular music video countdown show 106 & Park from 2006 until 2012. He was also the co-anchor of E! News from 2012-2015.

“The Sherman’s foundation does great work in Ghana addressing young people’s needs.  The silent auction will help their cause.  I am honored to be here tonight to be a part of this and also be here with Mr. Sidney Poitier.” Terrence J commented. 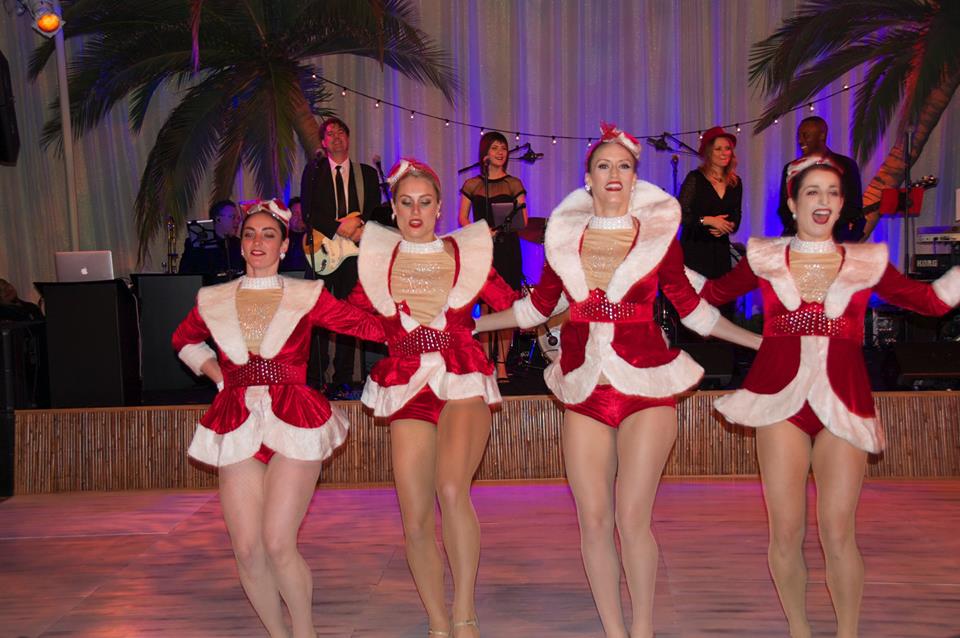 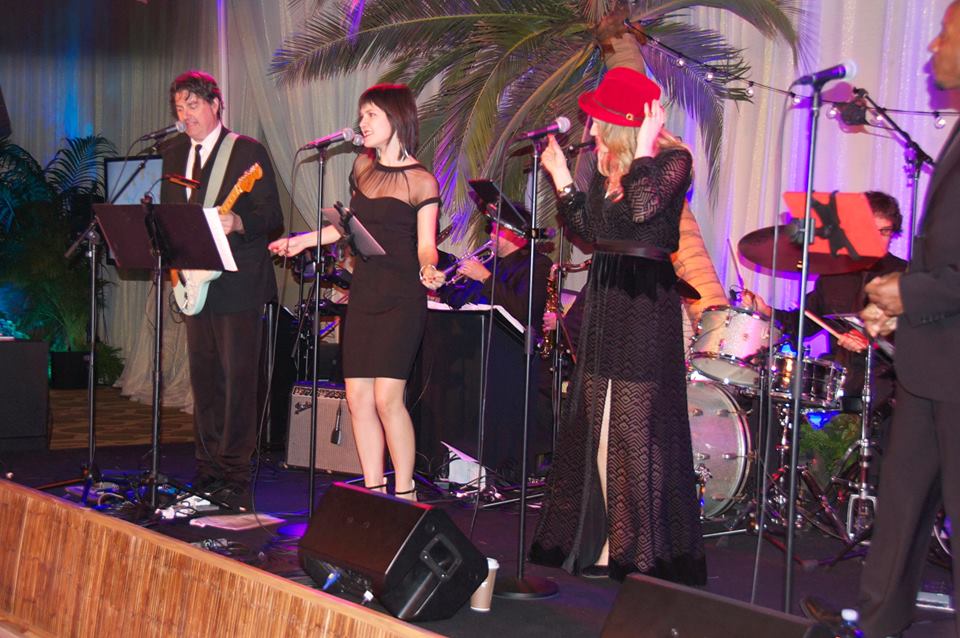 The Sherman’s program for the evening blazed with a wide gamut of entertainment.  Mr. Bobby Sherman ran the show like a seasoned veteran, at once singing his pop smash Easy Come, Easy Gothen displaying his consummate variety show host’s charm and humor as he introduced the other acts. The audience was treated to the spirited, supercharged eye-high leg kick in exact precision of the Santa clad Rockettes, and the gripping, elegant choreography and poignant singing of The Lion King cast, Mr. Sherman continued singing throughout the night with his backup band which also played cover songs for dancing.  The children from Ghana were skyped in as Brigette and Bobby talked with them on the computer.  Thirty or so happy, smiling faces greeted us from the Musical Village.  It was early morning there because of the nine-hour time difference. 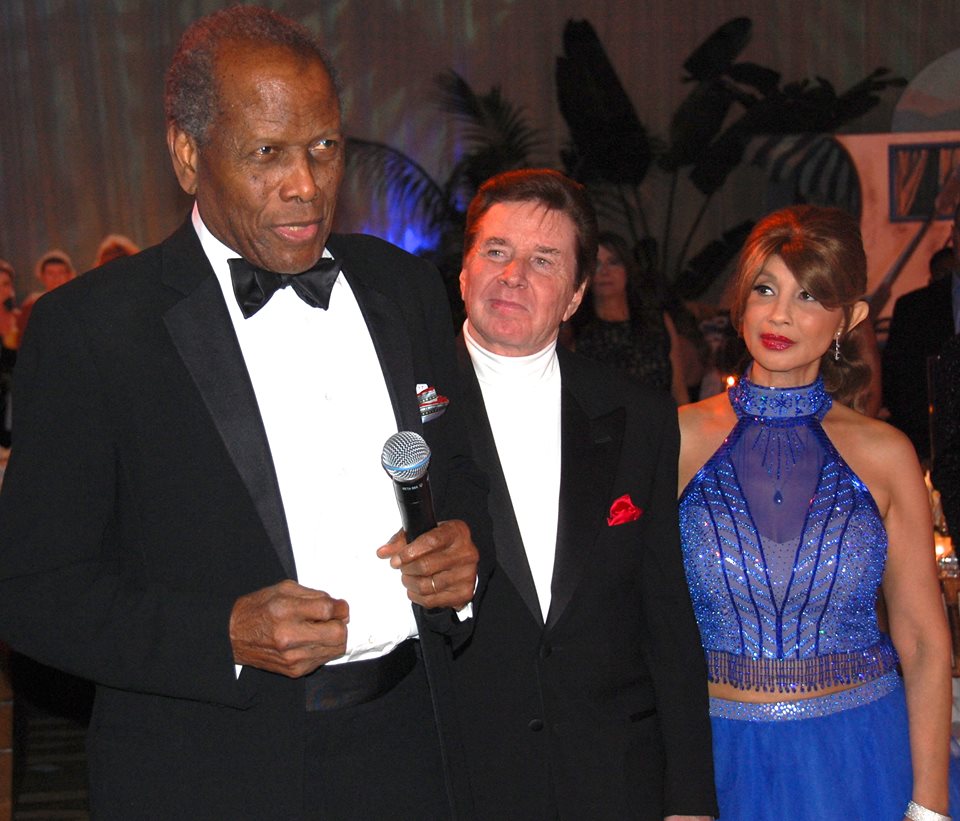 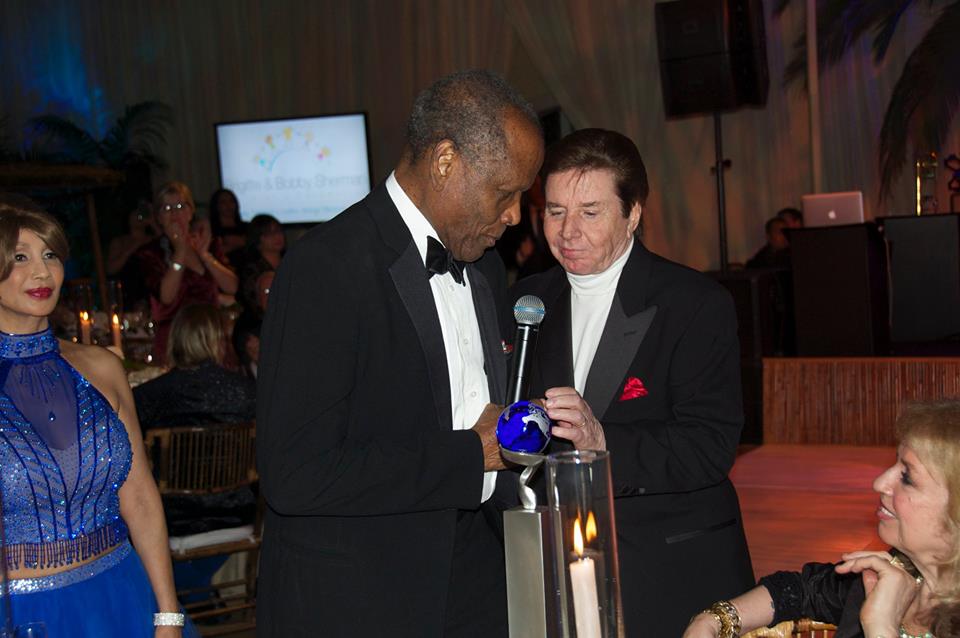 Finally the moment came to present the Leadership Award to Sidney Poitier.  The Academy Award winning actor stood tall and spoke eloquently.  “I was taught I had the basic rights as a human.  I was taught I was someone,” said Mr. Poitier.  Although his physical age is eighty-eight, Mr. Poitier still exuded a youthful countenance, a powerful presence, a handsome, elegant face.  The iconic lustrous voice filled the room  “I found this experience today a true experience with so many people coming together and becoming aware of this man and woman’s dedication to the children.  I haven’t seen such warmth since I was privileged to make a movie with two great filmmakers. I made those films in Africa and have made other films in Africa.   Some of the best actors function in Africa.   I’m  not going to waste your time.   I deeply appreciate this evening that my wife has talked me into coming here  (laughter) I am gifted with my family, and tonight I was gifted by watching the young ladies who danced and the actors who danced and sang from the Lion King show.  If you now give me time enough to accept this award from the depths of my soul… and the wonders that I have witnessed tonight.  I thank you.”

The glorious evening came to a close.  Bobby Sherman expressed it beautifully, “I hope you all enjoyed your three hour tour here.” 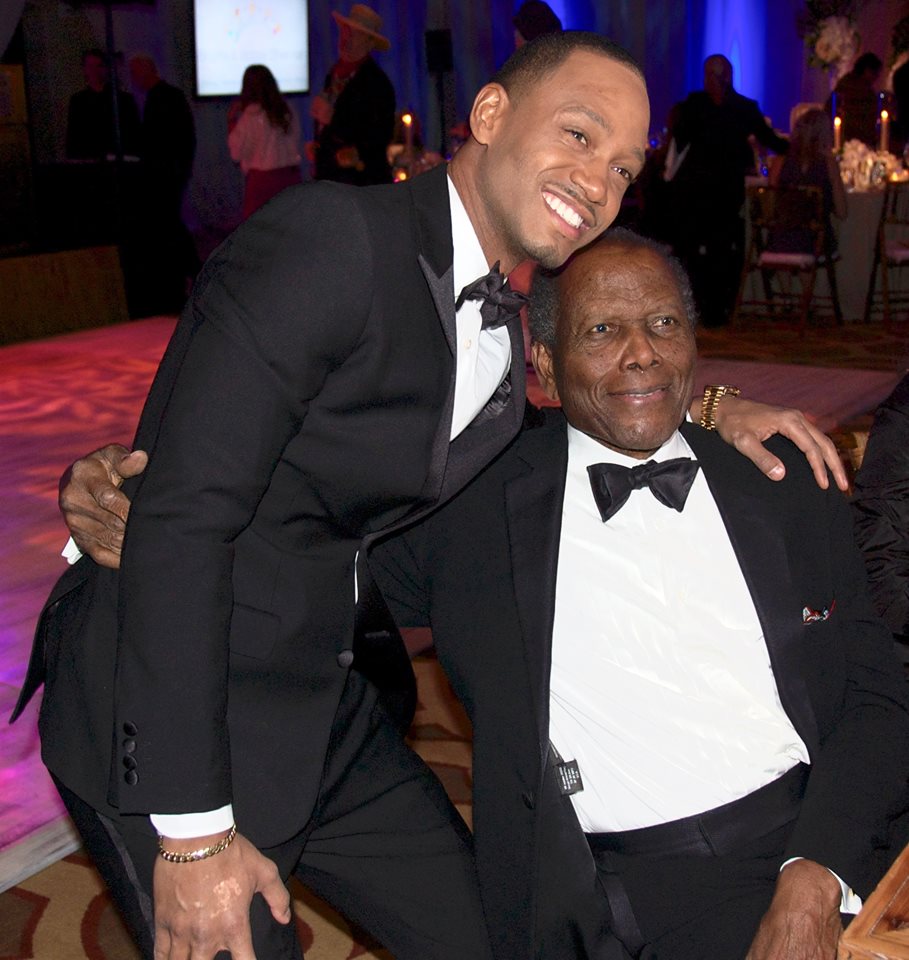 As Mr. Poitier exited the party for the evening, he gave this reporter a closing comment and selfie picture (which I will treasure always).  “This was truly and extraordinary evening and it was properly executed with love.” 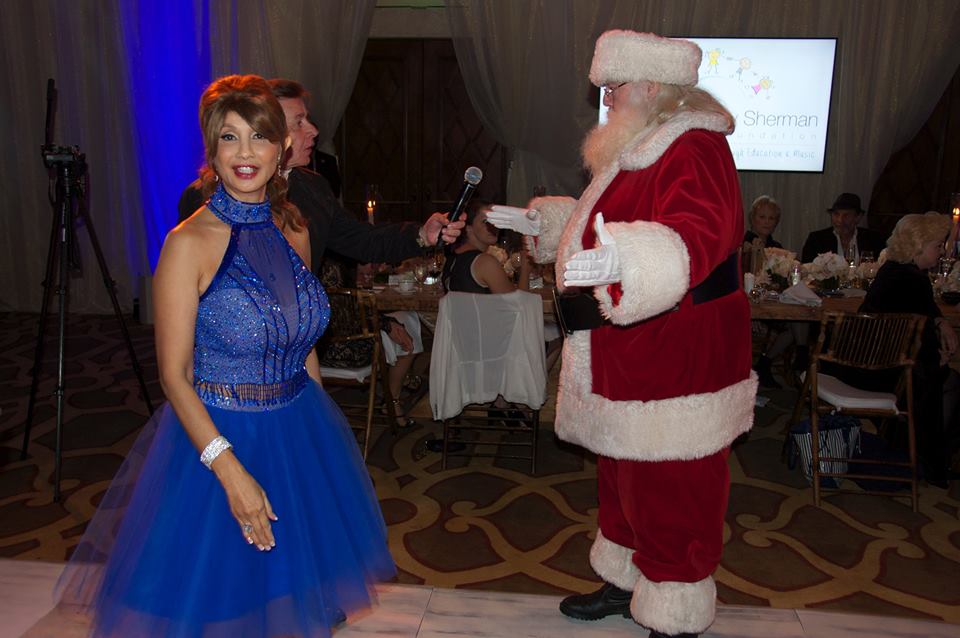 For more information about the Brigitte & Bobby Sherman Children’s Foundation go to: www.bbscfoundation.org