It is so unusual to discover a person who seems to reflect a parallel life as oneself.  Mick Carlon, author, screenwriter, jazz journalist, is that one person for me.  He was authored three distinctive novels that center on jazz musicians: “Riding on Duke’s Train”, “Travels With Louis” and “Girl Singer.”  I am also pleased to announce that his script that he co-wrote with Ken Kimmelman “Riding on Duke’s Train” won the best screenplay at the 2016 Harlem International Film Festival this year and is in the works of becoming a featured film.  As it is the season for giving, why not buy any of his novels for your friends, loved ones, and even your children.  Read my interview then on Girl Singer, his latest novel.

I think I met my twin brother who was separated at birth, he’s slightly younger (six years after I was born), grew up in New England (but lives on the Cape now, where I vacationed every summer with my family from the age of three) his relatives were from Westchester County, NY (where I grew up) and he was born in New Rochelle… he  actually has been to Paul’s Mall in Copley Square, Boston to hear all the jazz greats back in the 1970’s, which was my main haunt when I was a student at Boston University… and we both write about, live and breathe the music dearest to our hearts…Jazz.

Most importantly, Mick Carlon constructs a polyphonic body of work using the literary device of novels to entertain and educate the audience about the legendary musicians of jazz.  Since the age of fifteen he’s been studying and listening to the Masters and ingeniously taps into this encyclopedic reservoir, creating fictional characters who live among the likes of Duke Ellington, Louis Armstrong and Count Basie.  “When I sat down to write Duke’s Train and Travels With Louis, I didn’t need a reference book with me. I had 30 years of knowledge in my head,” Mick Carlon said. 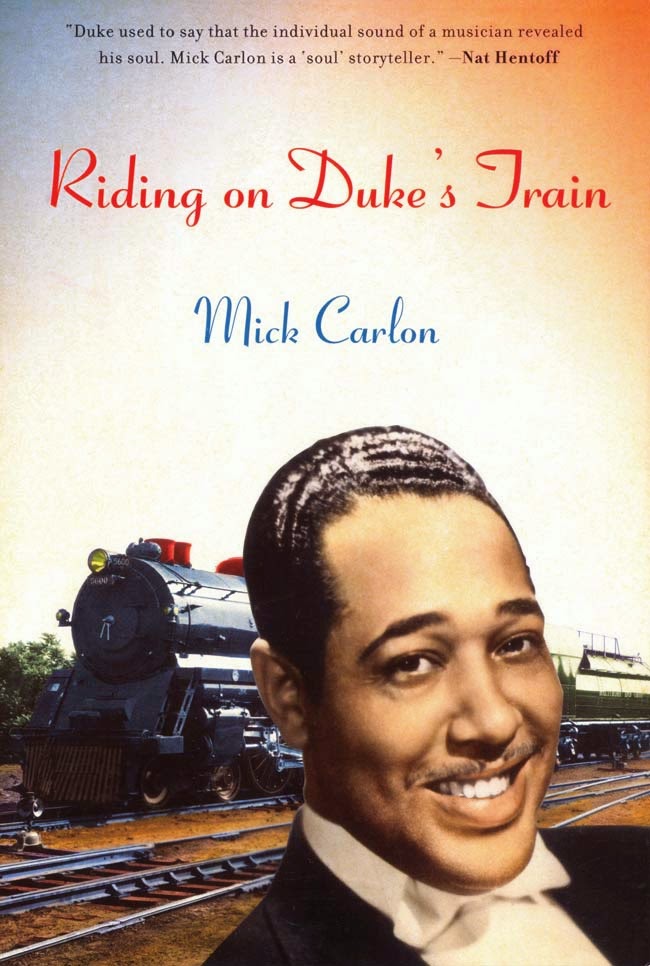 I interviewed my long lost twin today about his newest novel called, Girl Singer that I thoroughly adored.  I highly recommend a fabulous read if you love jazz, love history, love a gritty romance, and want to fantasize that you’re back in time with Lester Young, Count Basie, Hershel Evans, Billie Holiday, Ella Fitzgerald, Harry Sweets Edison, Walter Page, Papa Jo Jones. YUM! This story is rich and tasty with these characters surrounding our main girl, Avery who desires to be a jazz singer.  She gets her big break when the “Pres”(Lester Young) hears her golden voice and recommends she take Lady Day’s (Billie Holiday) place in the Count Basie Band. The story swings from there down the streets of NYC and jets around the small towns and big cities all over the USA, where the crowd comes to hear the blazing hot musicians of Count Basie’s band.  Carlon commented on Avery, the main character.

Avery comes from an abusive, tumultuous background and is wary of men.  Even though she loves her band mates like brothers, she doesn’t allow any one of them into the private sanctuary of her heart.  When she meets Karl, a holocaust survivor who lives in her building, Avery slowly lets down her guard. “Halfway through the book, I wanted Girl Singer to be different than my other books about traveling the road.  I asked myself why not have a love story about an interracial couple.  Then the second half of the book wrote itself.”

Mick Carlon based the character of Karl on his dear friend, Heinz Praeger who was raised in Berlin Germany and was shipped to the concentration camp of Dachau during the Nazi regime.  Heinz escaped the concentration camp and fled to Shanghai, China.  Mick told the story of how he met Heinz.  “Heinz Praeger lived five miles from me on Cape Cod. I gave speech about one of my books and he approached me afterwards.  I took him out to dinner and Heinz grabbed the check.  I wasn’t about to wrestle a 75-year-old man for the check.   He became one of the dearest friends of my life.  The experiences of Karl, most of them, happened to Heinz.”

Strangely enough, destiny intervened in this author’s life.  Carlon found himself meeting some of the very salty and savory characters in the jazz world which has contribute to the elegant intimacy Carlon brings to the legendary individuals that fill his stories.  One such man is Jack Bradley, a photographer who traveled with and photographed the illustrious Louis Armstrong.   “ I’ve informally been interviewing Jack Bradley for over twenty years,” Carlon said.  “I would ask him things like what was Armstrong like, how did he dress, what did you talk about.  So when I wrote Travels With Louis, I had all the inside stories.”

I asked Mick to tell me a few stories about Louis Armstrong.

“The first of every month envelopes with checks inside would go to friends or widows of friends who were down and out.  Louis didn’t want publicity, so no one ever knew where the money came from.  Also he hated bigotry.  If it happened to somebody else, Louis would hit the roof.  But if it happened to him, he would shake his head and say, ‘ That cat doesn’t understand what life is about yet.”

In honor of his friendship with Jack Bradley, Mick Carlon named the protagonist in Travels With Louis, Fred Bradley.   Fred’s a 12-year old trumpeter who craves to be a jazz musician but has devastating stage fright.  The story revolves around Fred meeting Armstrong and being allowed to travel with Louis Armstrong’s band during summer vacations.

Jack Bradley warned the author when asked to read the manuscript, “If you’ve written one phony word about Louis, I will call you a mother…(fill in the blank) to your face.”  Carlon laughed and said, “A week later when he called Jack told me, ‘you had me in tears.   It was like visiting my friend again.’”

Here’s how Mick Carlon began writing novels.  Although he had been an assistant editor for Little Brown Publishing in Boston right out of college, and had taught high school and junior high school English for thirty years, he had never written a novel –

until 2005.  One day while doing hall duty and being caught up with grading papers, Carlon started to doodle with the pen.  Soon the first chapter of Riding With Duke’s Train poured out of him.  For the next two years he worked on the story while keeping his day job as a teacher.  Carlon’s goal was to write a novel for young people that not only would teach them about jazz but also make the story compelling.  The next step was sending the manuscript to publishers.  Never giving up, three years later, an independent publisher, Leapfrog, New York said yes.

Carlon remembered those days.  “I would get, great story, but no kids are interested in jazz anymore.  I didn’t give up and kept sending it out.   I would send out query letters to publishers and agents and hear nothing back… it was like they flushed the letter down the toilet.  Then in 2010, I was teaching, and my wife gave me a call saying Leapfrog wanted to publish my novel.  I did a Pete Townsend leap in the air and yelled so loudly.”

Right now Riding on Duke’s Train is in the curriculum of forty-eight schools (6th -8th) and Travels With Louis is in forty-one schools. (6th-8th) Girl Singer is being “piloted” in twenty-four high schools across the country.  Mick Carlon has taken his show on the road and has spoken to students in Dallas, Anaheim, and in Minneapolis.  Every August at the Satchimo Summerfest in New Orleans, Carlon has been invited to speak as well.

The latest news for my super talented twin brother (a sister can brag, can’t she?)

Riding on Duke’s Train is being made into a featured animated film!  Two-time Emmy winner, Ken Kimmelman will be directing and working in conjunction with Jazz at Lincoln Center. Of course Mick Carlon wrote the screenplay. “A well-known veteran African American actor just agreed to be the voice of Duke,” Mick revealed.  “But I can’t say who at this time.” (I’ll find out soon and will tell all.)

Mick Carlon loves Jazz.  He wants to see this great American iconic music passed down to the young people of our country.  He plays jazz in his classrooms so the kids can hear and learn to appreciate those men and women who were creating the magic of improvisation… the music of joy…the music of genius.  He even goes as far as telling the kids, “If you buy a jazz album and listen to it for one week and you don’t like it, I will buy it back from you for one more dollar than you paid for it.” 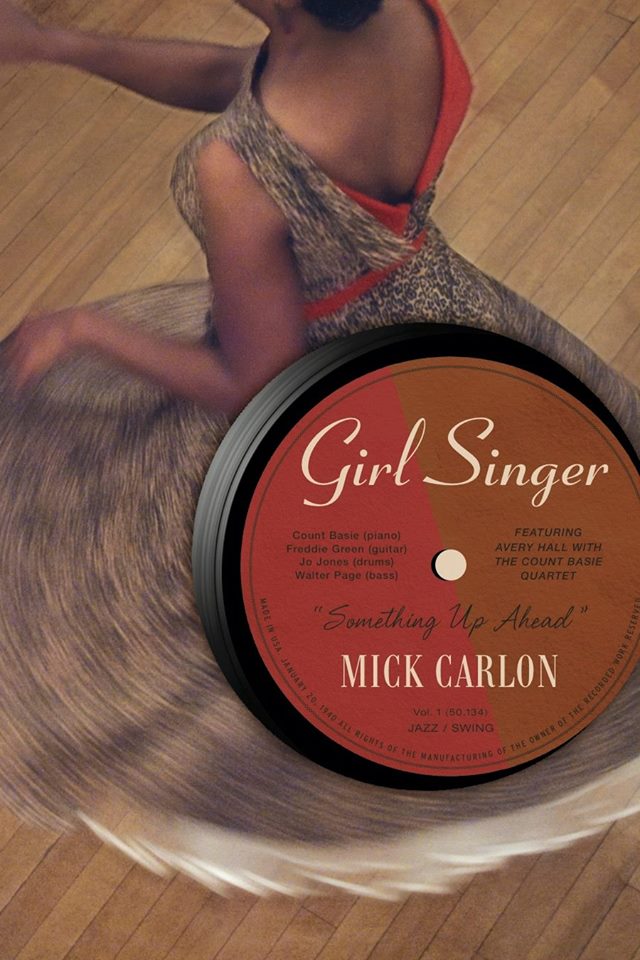 I just want to hug him.  When I write about jazz in my articles, I want the reader to feel that he or she is at the concert with me…to have the enchanting music seep into their senses.   Mick Carlon writes with the same intensity.  I quote some lines from Girl Singer:

When Hershel stood to solo, his sound was deep, so powerful, that you could hear the heat of his Texas childhood in every note.  With his face drenched in sweat and his neck veins bulging, Hersh’s solo that night on Topsy was frantic, beyond intense.

Pres held his horn at an odd angle-tilted away from his body-and his sound was as different from Hershel’s as a soufflé is from steak.  Lester’s sound was lighter, airier, but no less rhythmic than his friend’s.

Hershel was a rip-roaring dancer on his horn-but Pres was a poet.

“Jazz nourishes the soul.  It brings so much joy to people and yet, historically, it was produced by artists who were treated like third class citizens.  I think they were our nation’s geniuses.  The joy jazz has given me has made me want to spread the “gospel” through my books.  You don’t need a PhD to understand the music, you just need a pair of ears, an open mind, and the music does the rest,” concluded Mick Carlon.

I told you he was my long lost twin brother.  Together we’ll spread the gospel of the music that captured our hearts and souls…JAZZ.

A fun side note…Mick Carlon and I are joining forces and will be collaborating on a novel I’ve started writing called Letters From Paris.  The story is about two brothers in the 1930’s, one lives in Paris and is pursuing a career as a jazz singer and the other brother lives in New Orleans and is a trumpet player.  The story unfolds through their letter writing back and forth.  We are going to have fun and pretend to write letters back and forth as these two characters communicate about their lives.  I already have written the first letter.  Stay tuned…

You can buy Mick Carlon’s novels on Amazon.  Here are some links also for Mick Carlon: