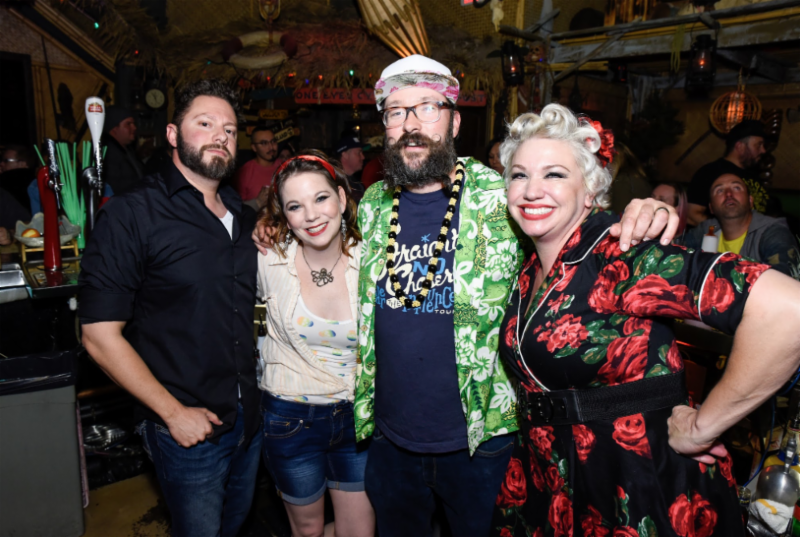 To kick off the festivities, former Lt. Gov. of Nevada, retired neurosurgeon and collector of unusual Vegas artifacts Lonnie Hammargren was honored with his own shrunken head. Tony Felicetta of The Sharps was on hand to present the latest addition to the bar’s growing collection of famous heads. Prior to the unveiling, Hammargren and his family were emotionally moved as Felicetta paid tribute to the Las Vegas legend by sharing various personal and professional highlights and accolades.

“I just thought we were going out for a drink,” Hammargren told his emotional family, friends and fans who gathered in his honor. “It was a total surprise to be included in the shrunken head collection, and it means the world to me.”

Throughout the night, local guest bartenders served up their twists on Donn Beach classic cocktails in honor of the founder of tiki cocktail culture. Participating bartenders included Anthony Demaria from Campari who served the “Bungle in the Jungle;” Wendy Hodges from Fusion Bar who served the “Pearl Diver;” Adam Rains from Flock & Fowl who served the “Navy Grog;” and Jessica Lee Westergom from The Black Sheep who served the “Zombie.”

“Donn Beach is responsible for tiki bars and tiki culture,” said Branden Powers, The Golden Tiki’s managing partner. “Tonight we pay tribute to a man who continues to inspire us. Cheers to his legacy!”

About The Golden Tiki
Located in Chinatown, Las Vegas, The Golden Tiki is a journey to a wondrous land where boundaries are only limited to one’s imagination. The vision of hospitality veteran Branden Powers, in collaboration with Seth Schorr, Jeff Fine and Joe Cain, The Golden Tiki has spared no expense in recreating the classic mid-century tiki bar, reminiscent of Don the Beachcomber and Trader Vic’s storied establishments. The cocktail menu features nostalgic classics and new creations, as well as a special treasure chest VIP experience. Collaborating with renowned artists including Tiki Bosko, Billy the Crud, Bill Collins and Oceanic Arts, the one-of-a-kind decor also boasts an animatronic skeleton of the mythical privateer and legend behind The Golden Tiki, William Tobias Faulkner. Open 24 hours a day, The Golden Tiki offers a multitude of experiences and can host private parties up to 145 people. For more information, visit thegoldentiki.com or call 702.222.3196. Like us at facebook.com/TheGoldenTikiVegas.