The Long Beach Jazz Festival celebrated its 30th year by giving the audience a colossal lineup of musicians for the three days of performances.  The featured artists covered Jazz in all its forms, mainstream, contemporary, fusion, mixed with some R&B, funk, soul, gospel, and blues.  Here were some of the main headliners: Marcus Miller, Poncho Sanchez, Bob James, Najee, Boney James, Will Downing, and Ramsey Lewis. 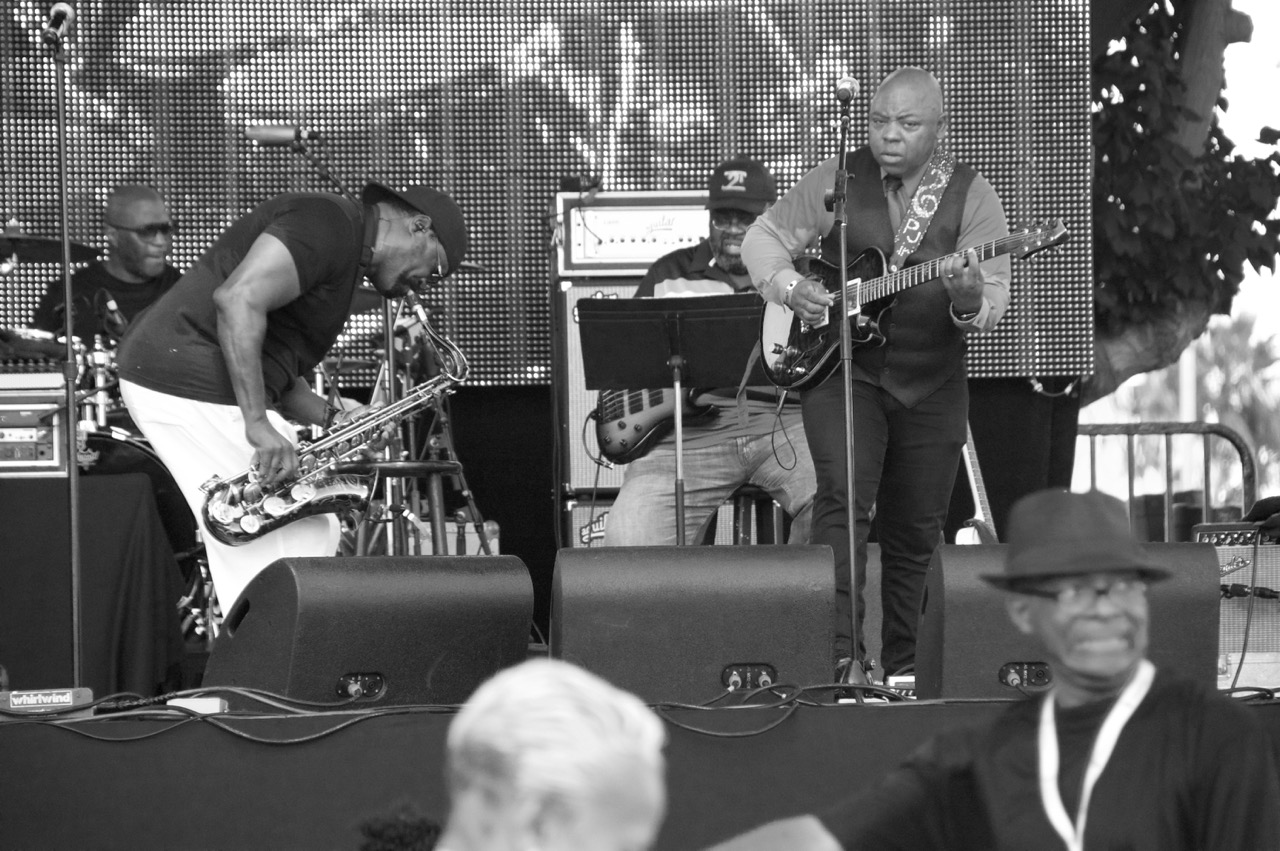 Kimberly Benoit, President of Rainbow Promotions told The Hollywood 360 why the 30 years have been so meaningful to her.

“Thanks to the vision my Dad had, it’s been a wonderful journey.  We are so blessed that we have done shows with this fabulous music that we call jazz.  This festival is special to me because my Dad had the fortitude to start it.  I brought my kids up in the business and it’s a third generation company.  It’s special to me because it’s in the beautiful city of Long Beach.  The artists make it very special – they have been faithful and loyal.

The jazz patrons make it so special too.  I just want to thank the fans and sponsors for making it possible for us.  We definitely can’t do it without them. “ 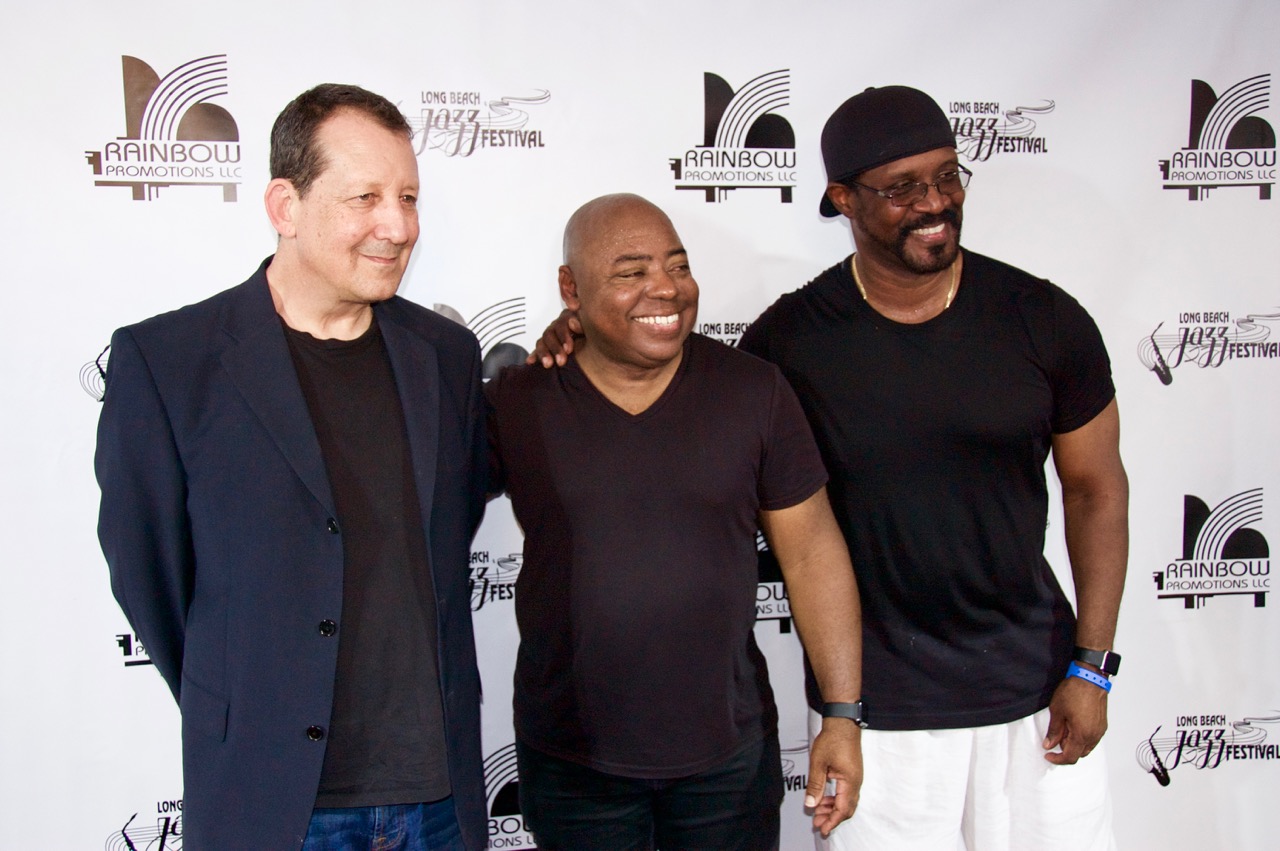 Who better than Everette Harp, Jeff Lorber, and Paul Jackson, Jr. that are the members of the group, Jazz Funk Soul to kick off The 30th Long Beach Jazz Festival. These veteran musicians piled on the groove which ran fast and furious by Everette Harp’s pumping, pulsating riffs, Jeff Lorber’s smooth soulful handling of the keys, and Paul Jackson, Jr.’s brilliant plucking of the guitar strings with full mastery. 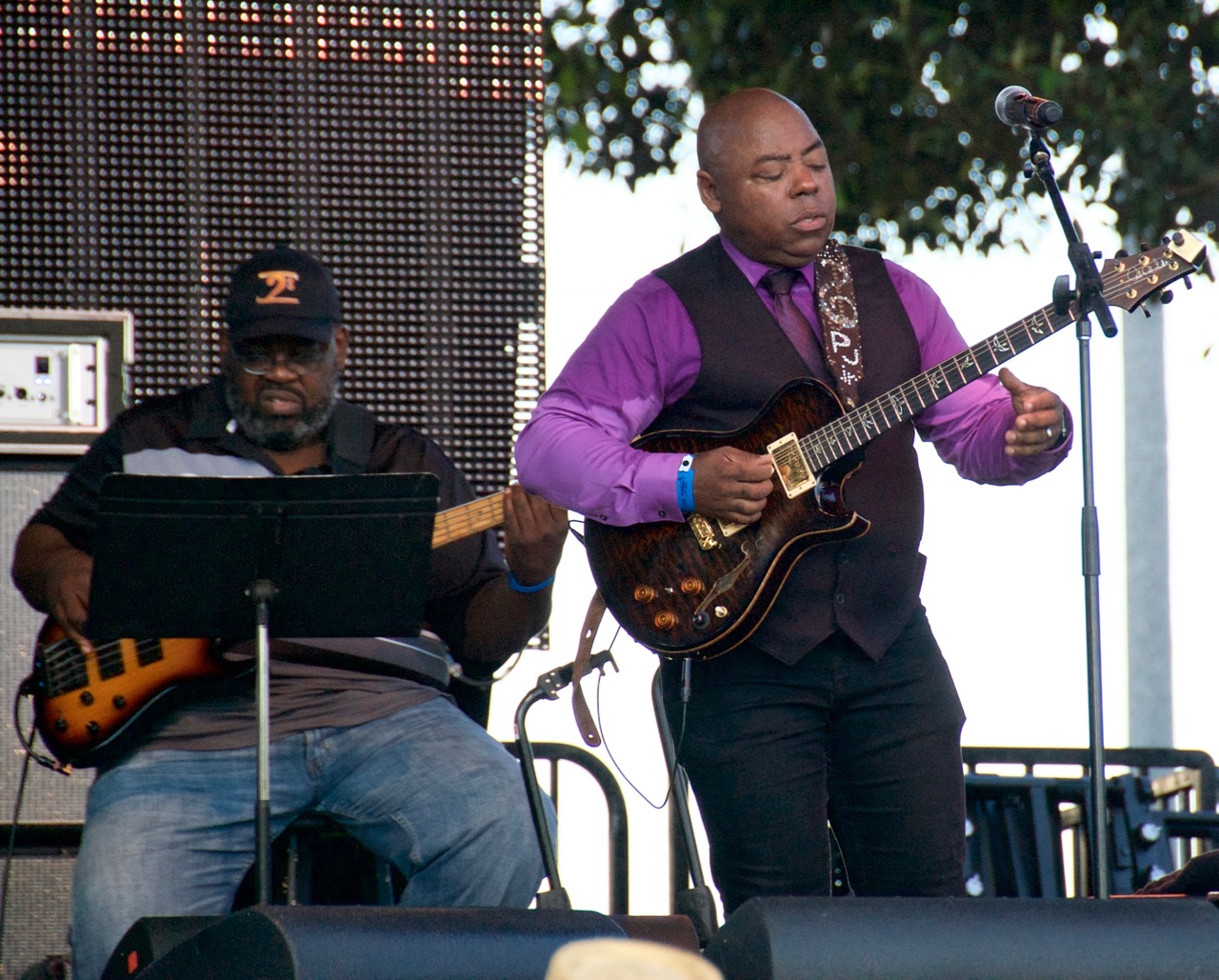 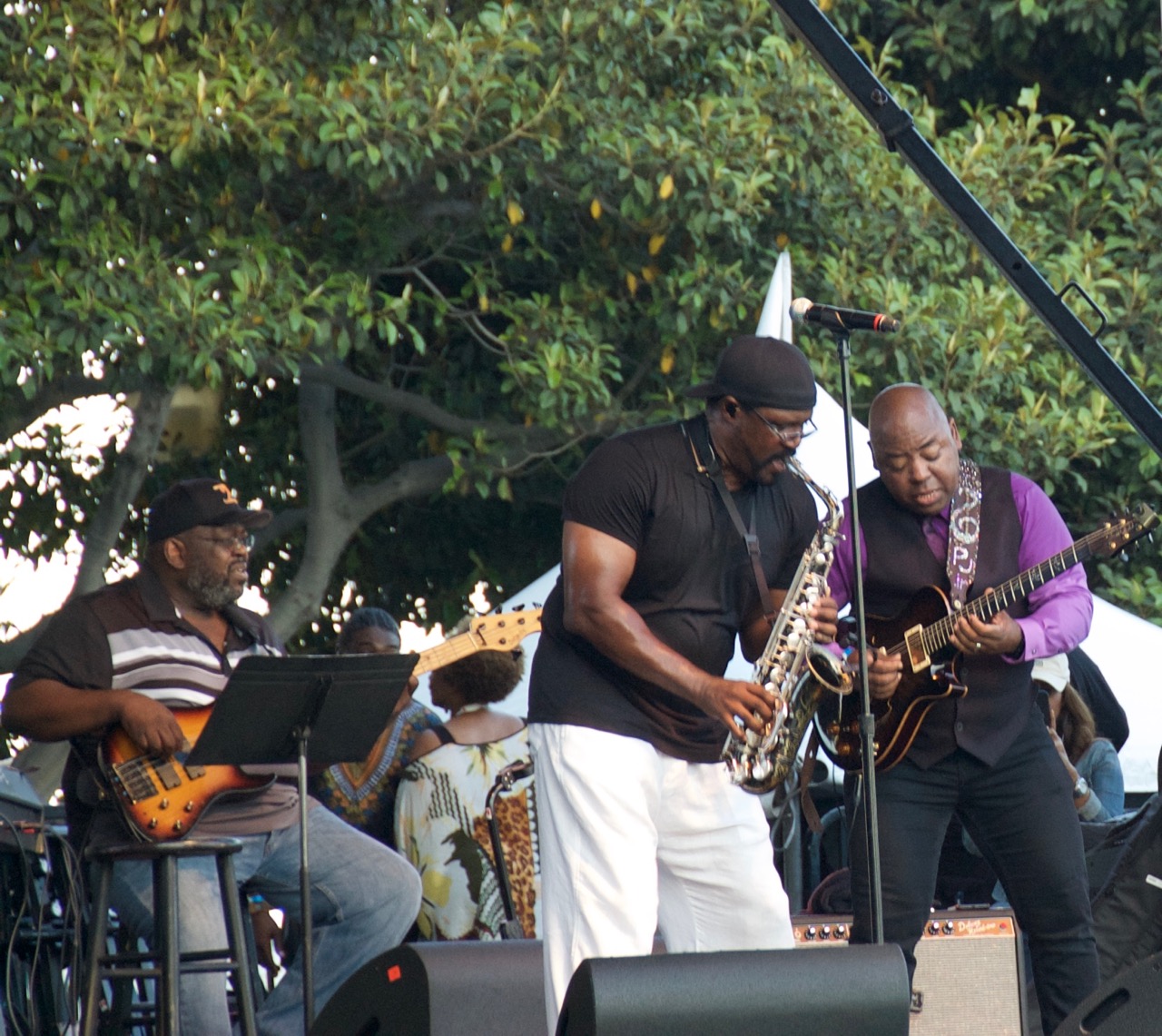 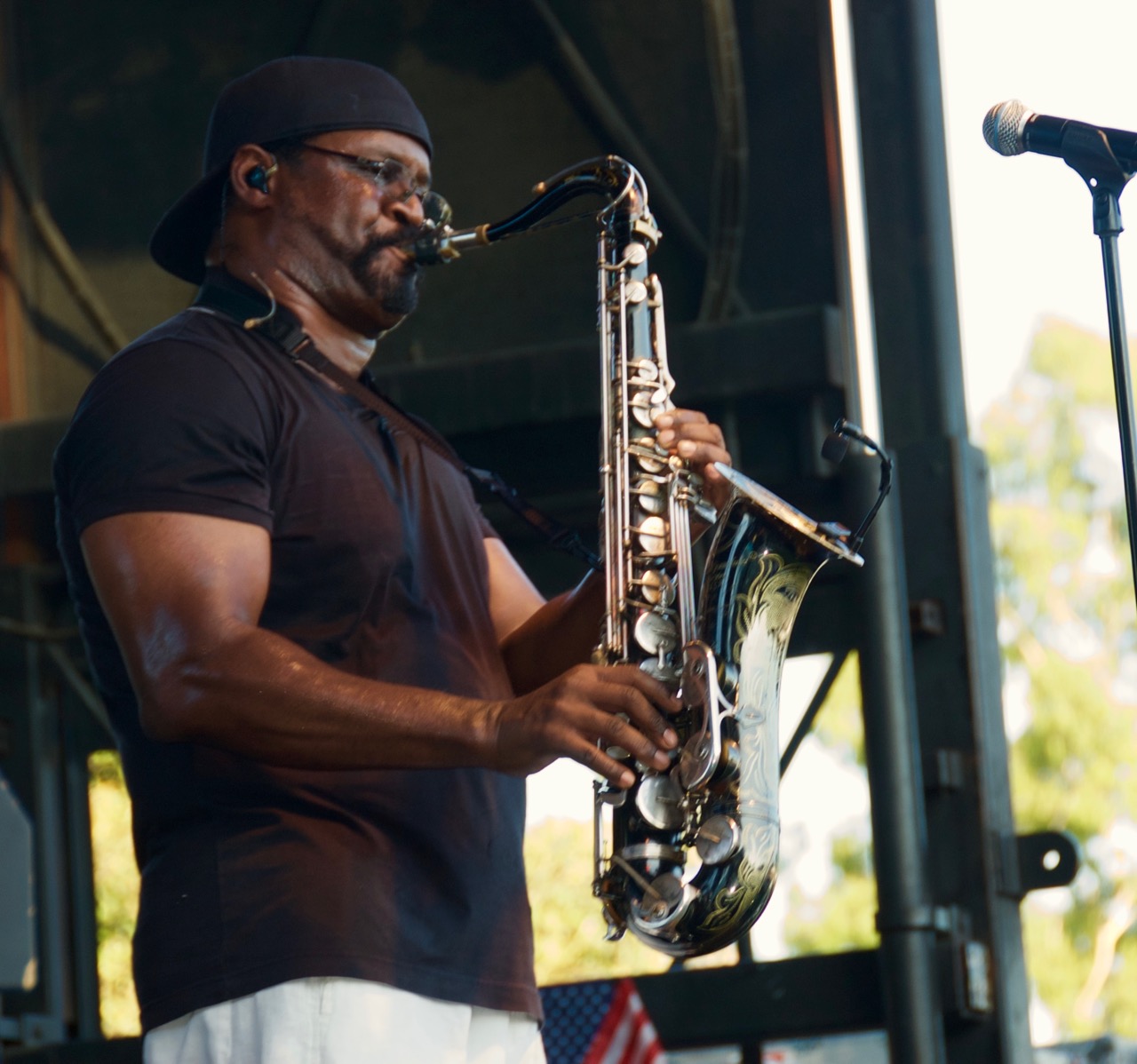 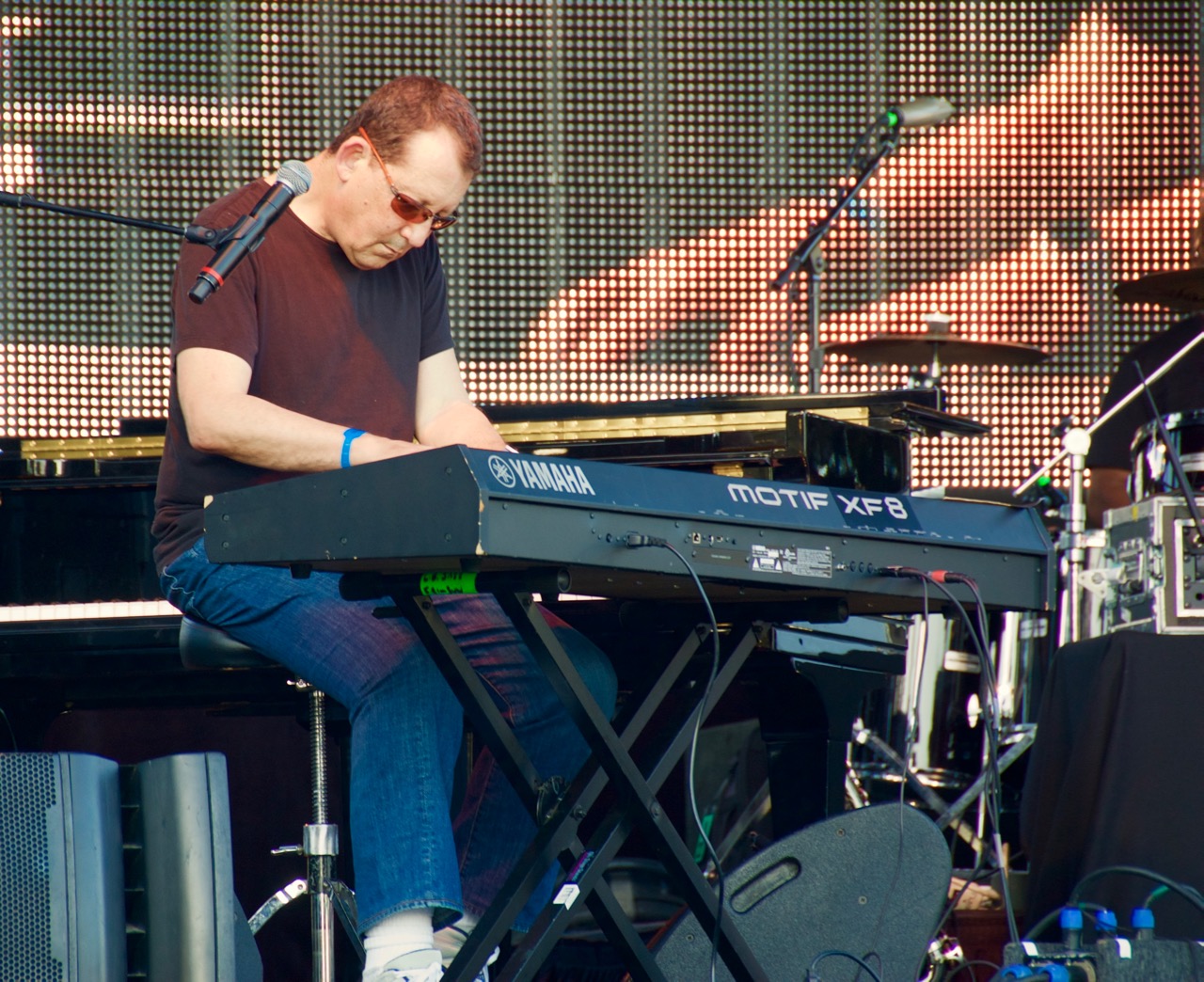 Of course, everyone was missing the late Chuck Loeb, who was the original guitarist of Jazz Funk Soul. The group was formed in 2013 having come together as a touring band and the group quickly developed into a creatively vibrant unit with a shared vision. They have two albums out, “Jazz Funk Soul” and “More Serious Business.” 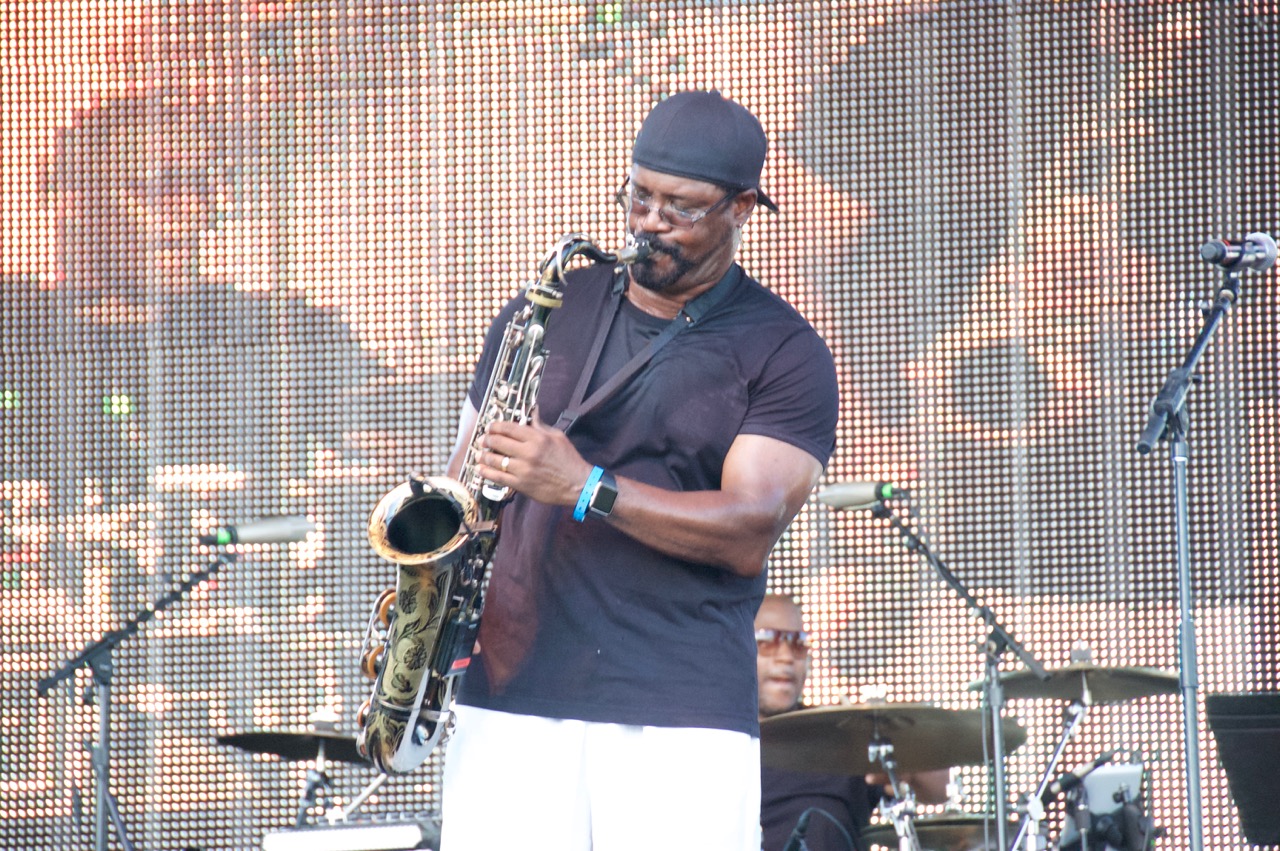 “Jazz Funk Soul was a group that was started by Jeff Lorber, Chuck Loeb, and myself. However, just recently we lost Chuck Loeb. Paul Jackson, Jr. was filling in while Chuck was sick so now he has been working with us on a continuous basis and has done a wonderful job, ” Everette Harp told me in his Facebook Live interview. He continued saying, “We are remembering Chuck and missing him. It’s been a wonderful musical journey that we go through in life and things like this happen where a dear friend passes. We keep going and forging ahead.”

Jazz Funk Soul lifted the audience’s spirits as they forged ahead on stage with their glorious music.

“It’s only been a couple of weeks since we lost Chuck,” Jeff Lorber said. “That makes it with a little bit of sadness there. But I love playing with these musicians. Everett is definitely one of the finest saxophone players in the world and Paul Jackson, Jr. and I go way back.” 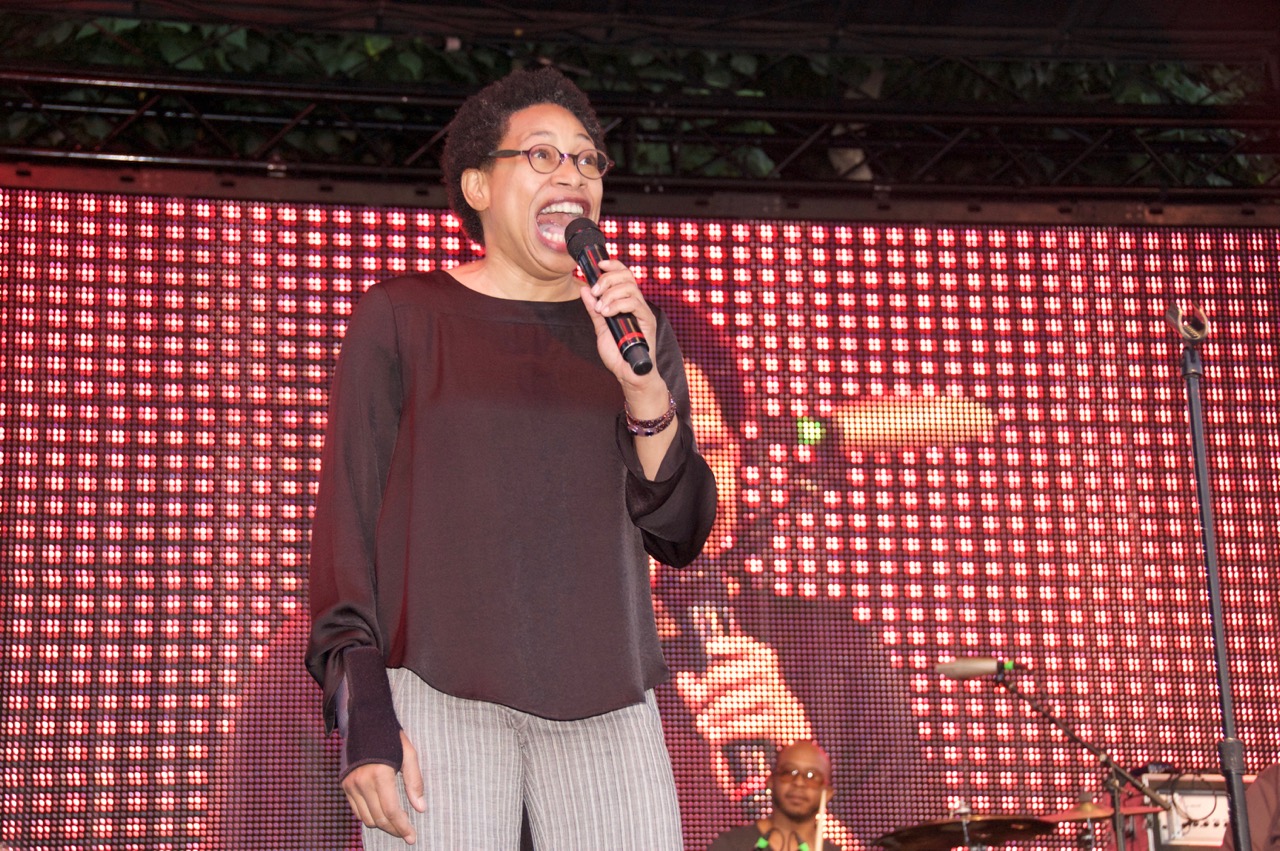 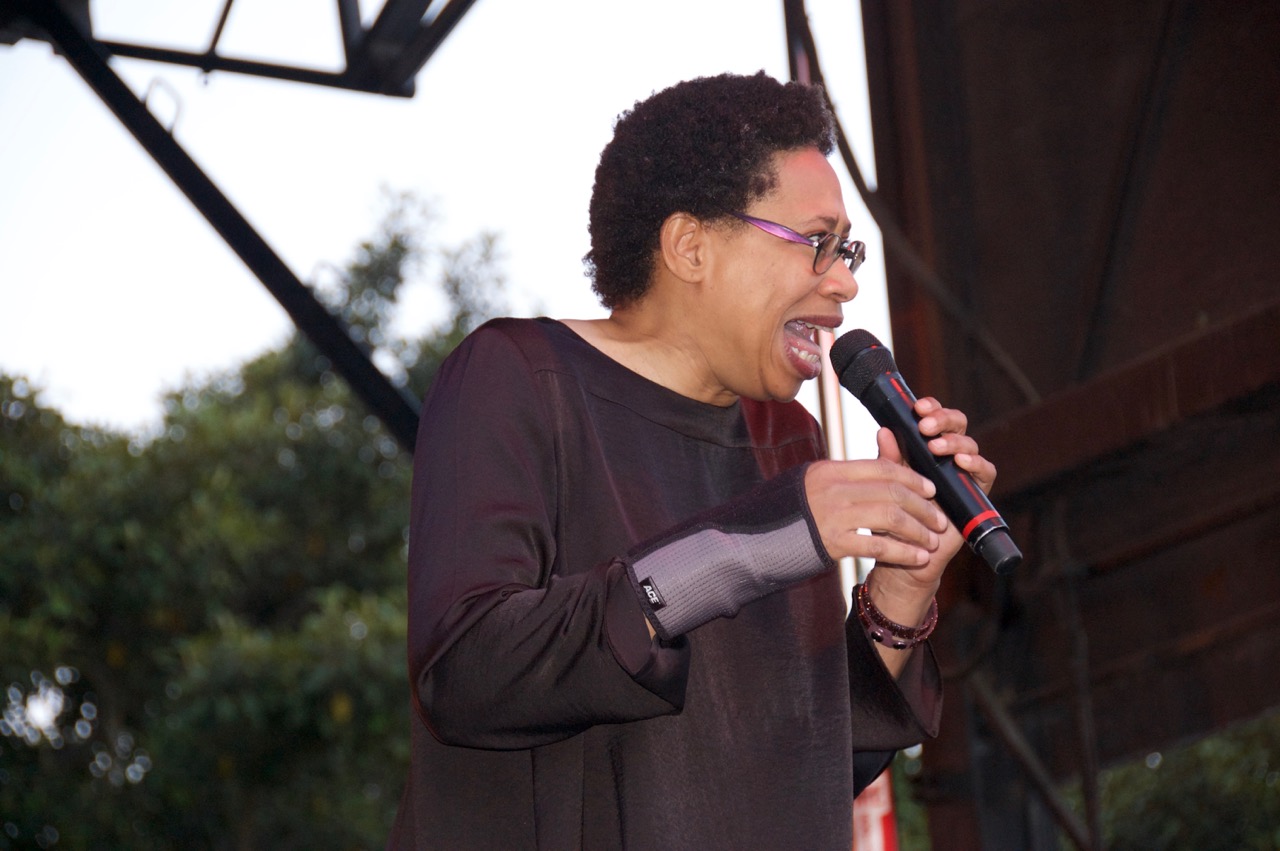 Rachelle Ferrell came up next and used her vocals in the unique and versatile way that showed off her artistry.  She crooned, she scatted, she created sounds that rang with improvisational proficiency.

What a marvelous surprise to see the iconic Randy Crawford backstage at the Long Beach Jazz Festival lounging around the Artist’s tent. When I went over to talk with her, Randy told me she was going to sit in and sing the still hip, golden song, “Street Life” with the Marcus Miller’s band.

“I am here at the festival tonight to sing “Street Life” with Marcus Miller as his surprise guest,” Randy Crawford revealed to me. “It’s kind of the Black Anthem and it’s been a part of my life since 1978.”

My whole body tingled with splendid delight when I heard that another moment in music history would be made that evening. 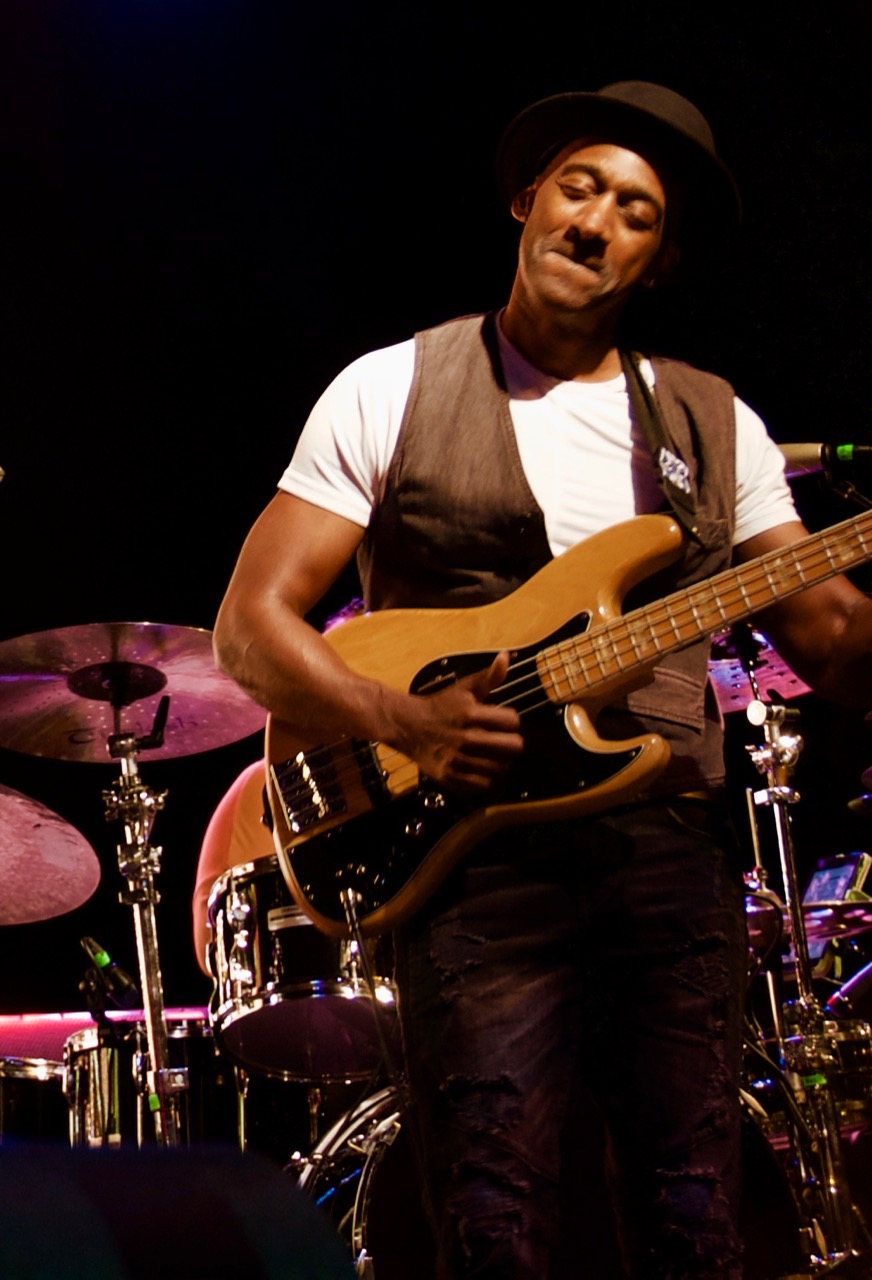 “Randy Crawford called me about 3 days ago and told me, ‘I’ve been off for a while and would like to get my feet wet again. Can you do “Street Life?’ I told her, ‘Yeah!’ Marcus Miller told me in our Facebook Live video.

“It was so great seeing her enjoying herself. We didn’t have any rehearsal so she just sat in with us. I love that kind of stuff.” 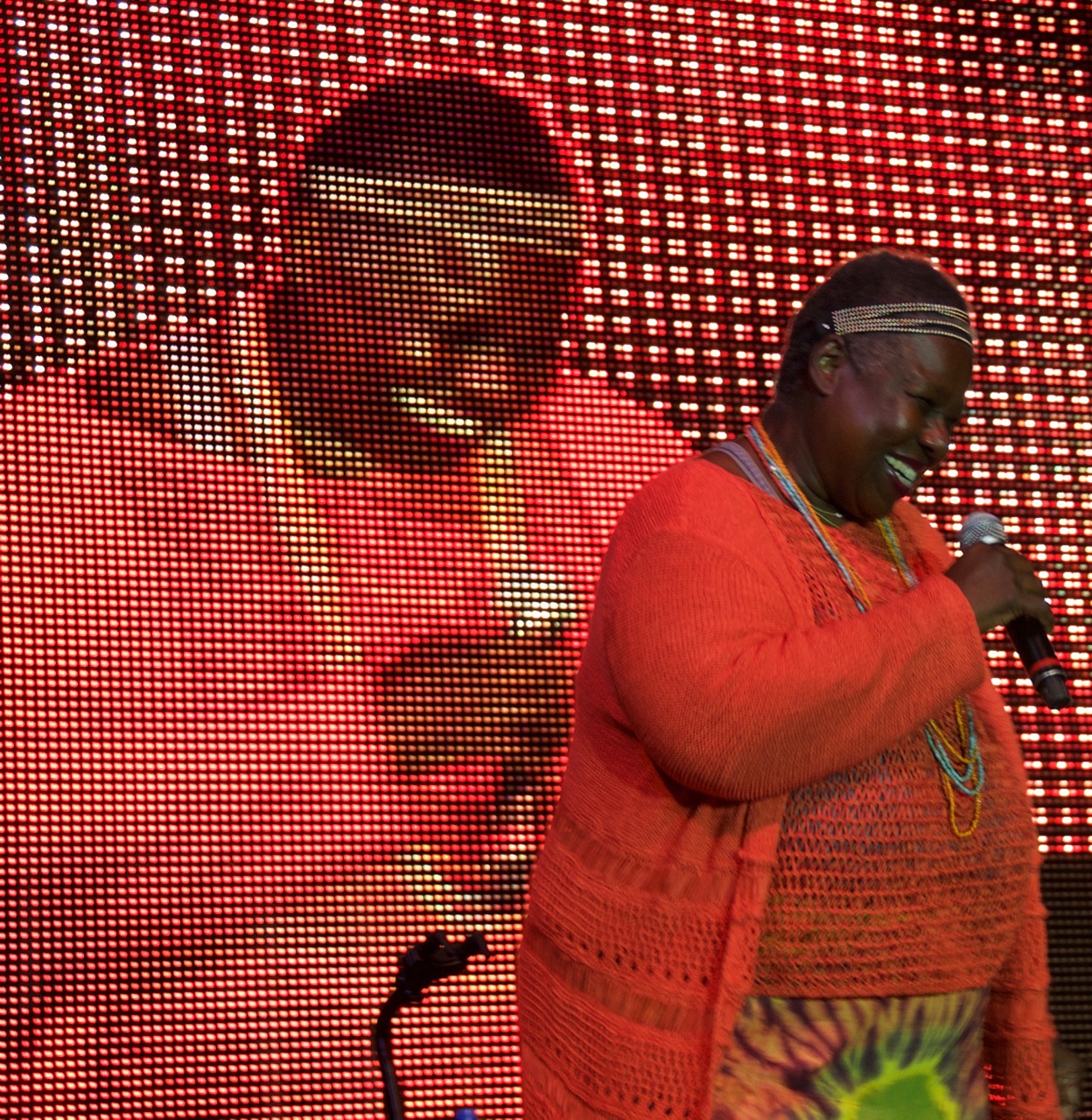 From the moment Randy Crawford walked on stage, the atmosphere throughout the audience vibrated with palpable rejoicing as the first recognizable bars of “Street Life” blew out of the Marcus Miller’s band. Not a moment to lose, everyone was up from their seats whupping it up dancing down the streets of their musical memories.

That growling …” music in the life… that’s all that’s left for me” …we were all singing the chorus…” street life, street life.” Marcus Miller’s bass thumped strong with the bouncing rhythm of grooving down the sidewalk of the city. Then the sax player blew hot riffs as Randy leaned into him. As the song exploded to the climactic finale, the historical richness of this momentous combo of Randy Crawford and Marcus Miller playing together, hit home. 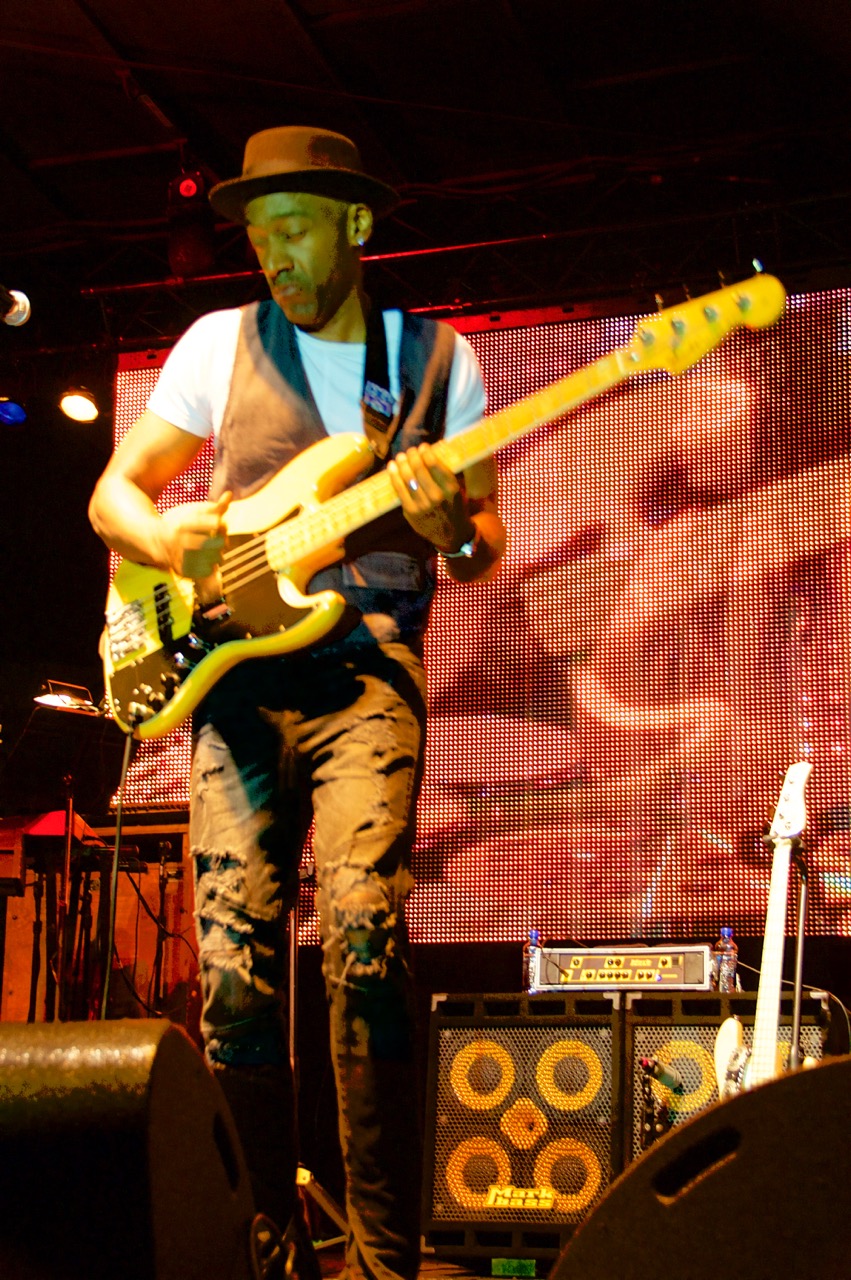 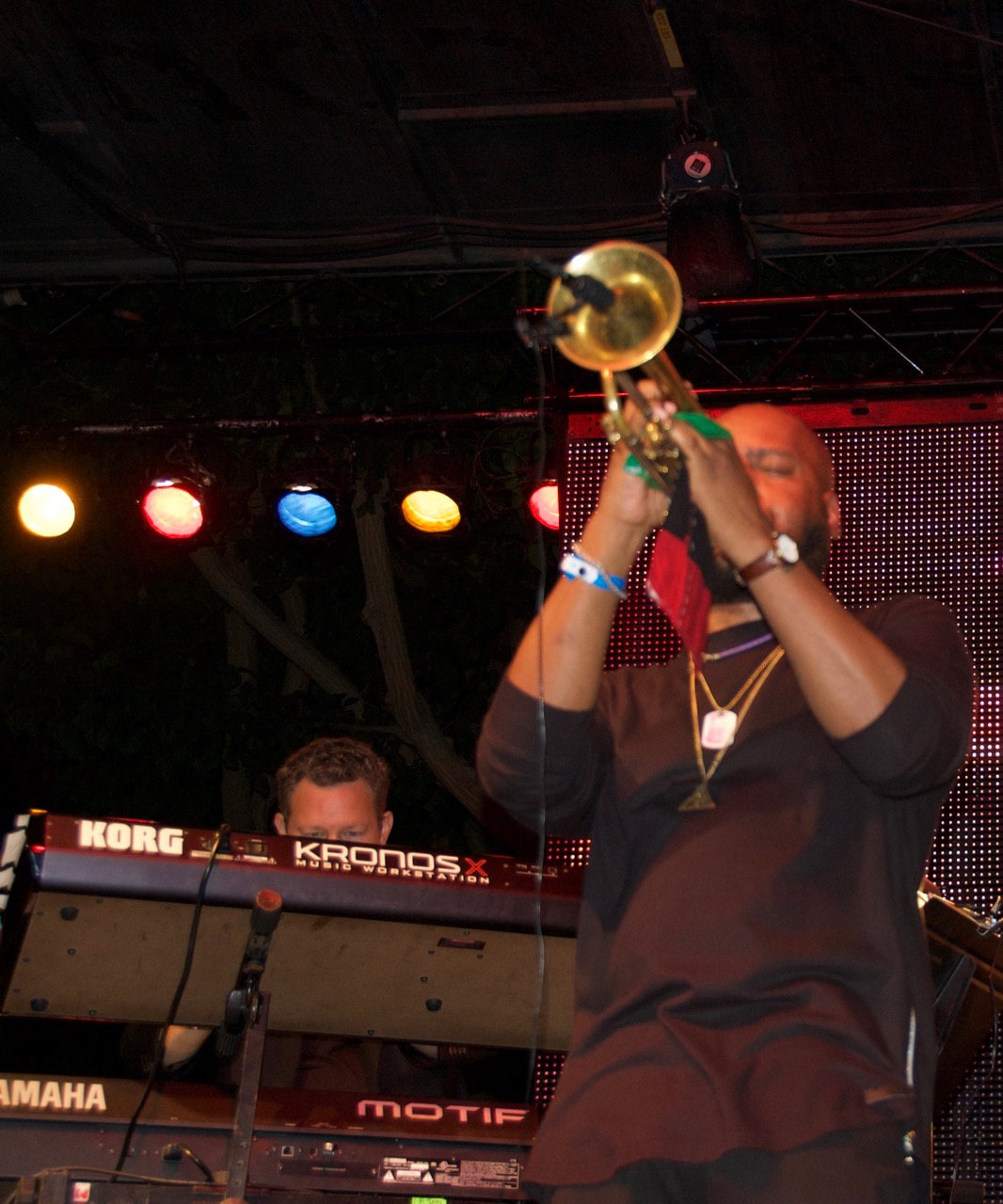 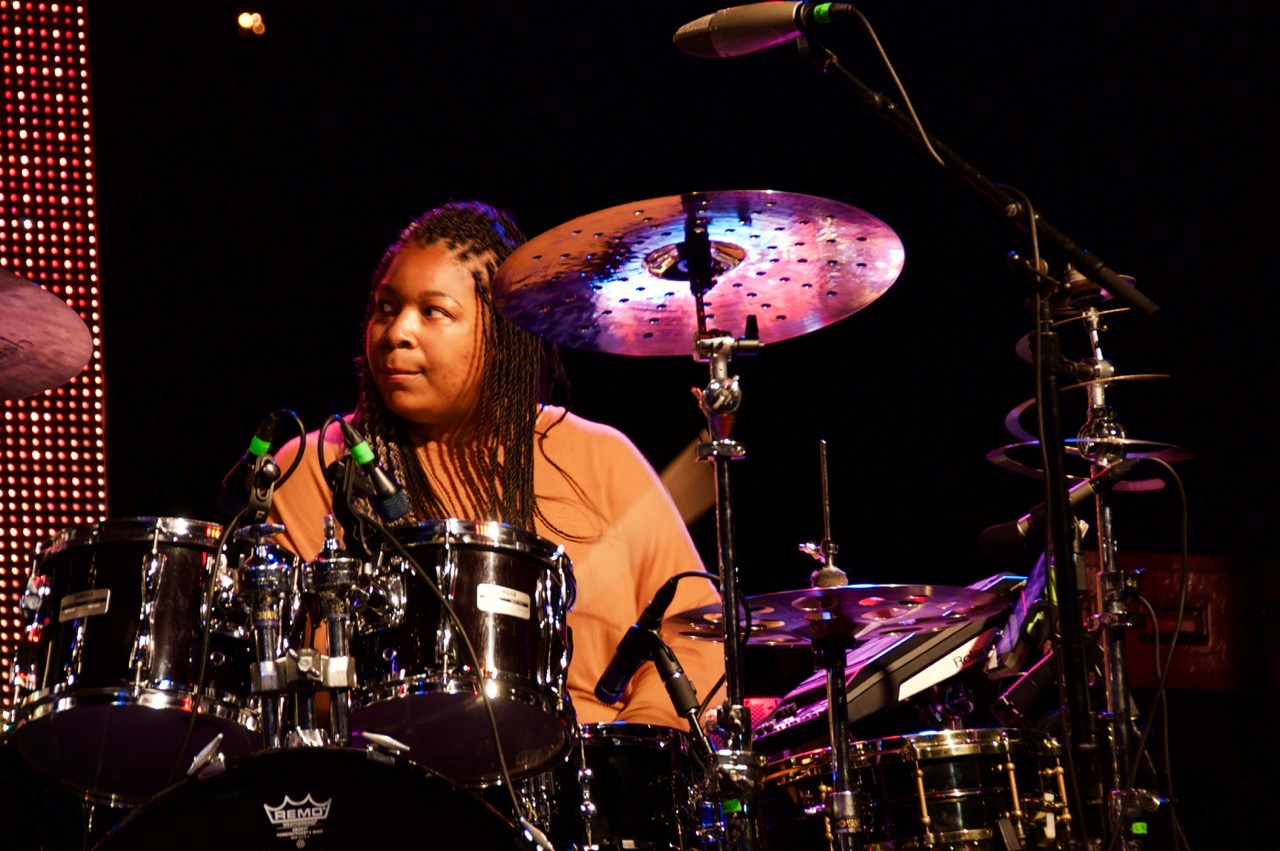 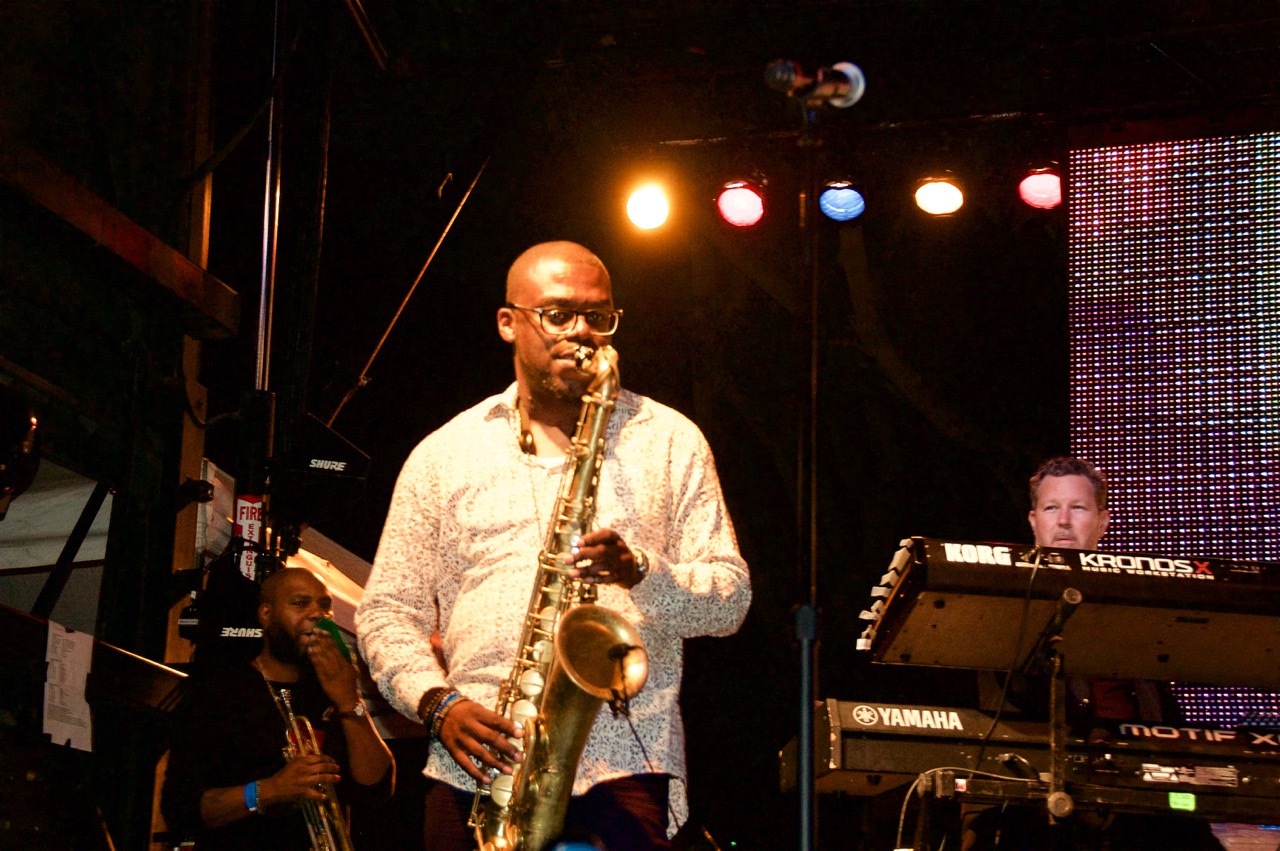 From the “Double Vision” album, we also heard “Maputo.” – the catchy tune was written by Marcus Miller and that Dave Sanborn brought to award nominated fame. Once again, the Marcus Miller band turned out the slow dance bottom up version.

Presently, Marcus Miller has been writing music for a movie score. “I just finished a score to the new Thurgood Marshall movie that stars Chadwick Boseman and was directed by Reginald Hudlin. I am also working on a new album.”

Marcus Miller, always hard at work, always slapping that bass with incredible dexterity, always creating a platoon of music that the fans love.