Rainbow Park Lagoon sparkled in the summer sun light…the grand lawn in front of the water was festooned with tables and chairs filled with the thousands of participants who were ready to party into the night with the star studded lineup of musicians.  Southern California’s longest running festival, is THE MOST TALKED ABOUT, THE MOST RECOGNIZED and THE PREMIER JAZZ FESTIVAL IN SOUTHERN CALIFORNIA.  No wonder…when they offer these premiere artists for the first night of the festival: MAJOR., Elan Trotman, Althea Rene, Gerald Albright, Jonathan Butler, Peter White, Euge Groove, Paul Taylor… 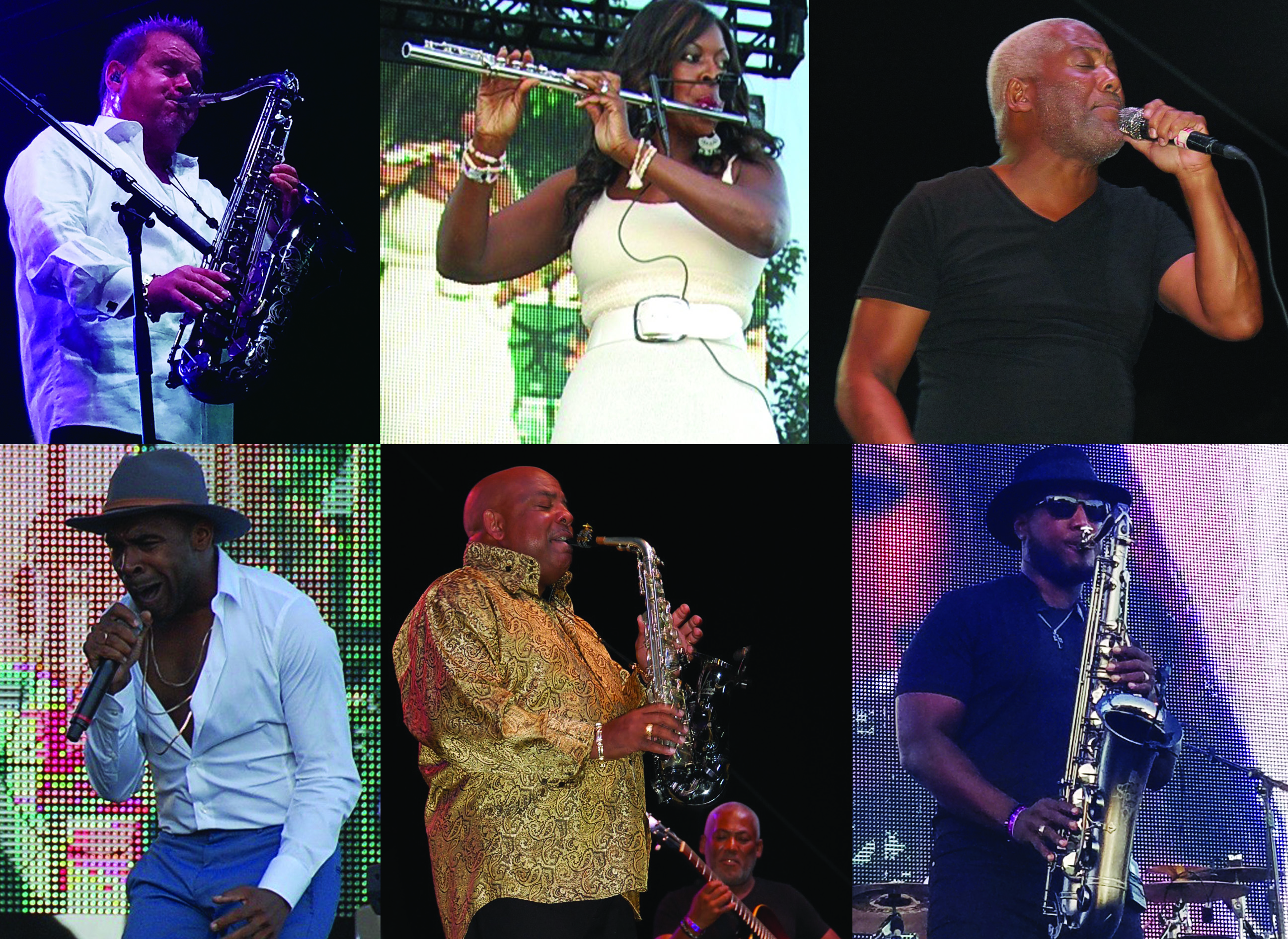 The audience absorbed every single note and showed their appreciation by whooping it up and dancing freely as the jazzy/ and funky music spiced up the partiers appetites.  The first band to perform was the vocalist, MAJOR..  His band exuded turbo energy as MAJOR. pranced around on stage, singing deep and soulful, while his female dancers whizzed by in white t-shirts and short, white pleated skirts and the male dancers, donned in black t-shirts emblemed in gold over white jeans, boldly matched their steps.  After his performance MAJOR. talked with The Hollywood 360:

“I was invited here to open up the 29th Long Beach Jazz Festival and I’m super grateful for the opportunity.  It’s been a lot of fun.  The stage was lit…when we performed! Rena Joy Banks happens to be my artistic director, it was her 30th birthday, so it was a great way for her to celebrate going into her 30th year.  I’m a Pop/Soul recording artist…my single, Why I Love You is climbing up the charts nation-wide and my EP, I Am MAJOR. is on Goggle, Amazon, iTunes…everywhere.”

Next up was saxophonist, Elan Trotman featuring Althea Rene on flute and Brian Simpson on keyboards.  Trotman’s group filled the air with his silky composition, Free , which reverberated with his Caribbean roots.  It was a delightful song for a summer’s day by the water, which painted a floating, light feeling, punctuated by Brian Simpson’s keys echoing the sound of steel drums.   Elan Trotman’s solo bore down with stinging blowing chops combined with exquisite lines and graceful phrasing.  The gorgeous Althea Rene, styling a form fitting bone colored net dress from her clothing line, Skin Tone Clothing, captivated the audience as she displayed expert fluid, lines on the flute while swaying her hips.  Rene launched a solo where she bent down to the floor and still killed it on the flute, blowing crazy fast riffs.   At one point Rene left the stage and thrilled the crowd by blowing alternative lines of notes then scatting luscious vocal sounds through her instrument.  The whole set ended with a blast of funky, playful music as Elan Trotman came back on stage to wave his magic sax over the crowd and leading his band to a climatic finish.

The Hollywood 360 caught up with Althea Rene, Elan Trotman and Brian Simpson after the set.

Althea Rene told us: “I just released a new single called Summer Love and will do a new live project…I’m in the works of putting that together.”

Brian Simpson said, “I’ve been doing a lot of shows together with Elan and we’re going to be performing at his Barbados Jazz Festival.  I’m doing jazz festivals all over the place. I’ve been playing the Long Beach Jazz Festival many years, going way back in the day playing with George Duke and Stanley Clarke.  I will have a new CD released by the end of the year.”

Elan Trotman remarked about the Long Beach Jazz Festival, “This is my first time performing.  I like how they have it set up and the diversity of the audience and the vision the organizers have.  I’ve done six or seven shows with Althea and we’re going to wrap it up in Barbados.  The flute and sax work well together. I got a new album out called Double Take.  A new single out called Sorry which is a Justin Bieber song. I am working on my Foundation down in Barbados…giving away free music lessons to third, fourth, and fifth graders on saxophones, trumpet clarinet and percussion.  All the instruments were donated by Cannonball Instruments.” Adding a personal invitation to all Jazz lovers: I want to extend a personal invitation to everyone to join me in my beautiful homeland of Barbados, Oct 7th, Columbus Day weekend.  The artists performing are Peter White, Althea Rene, Marcus Anderson, Brian Simpson, Jeffrey Osborne.  Check out barbadosjazzexcursion.com/ or give us a call at 1888-920-JAZZ.”

“How many of you want to party?”

With a large smile and pure joy, the veteran sax man threw down syncopated flowing riffs while interspersing his high piercing notes.  Jonathan Butler danced with his guitar balancing the interplay with Albright’s solid form.  Soon the spotlight was on Butler as he put his guitar to the side and gave us belly deep vocals that had echoes of his homeland of South Africa.  In this set, there was so much intensity of emotion coming off all the musicians. 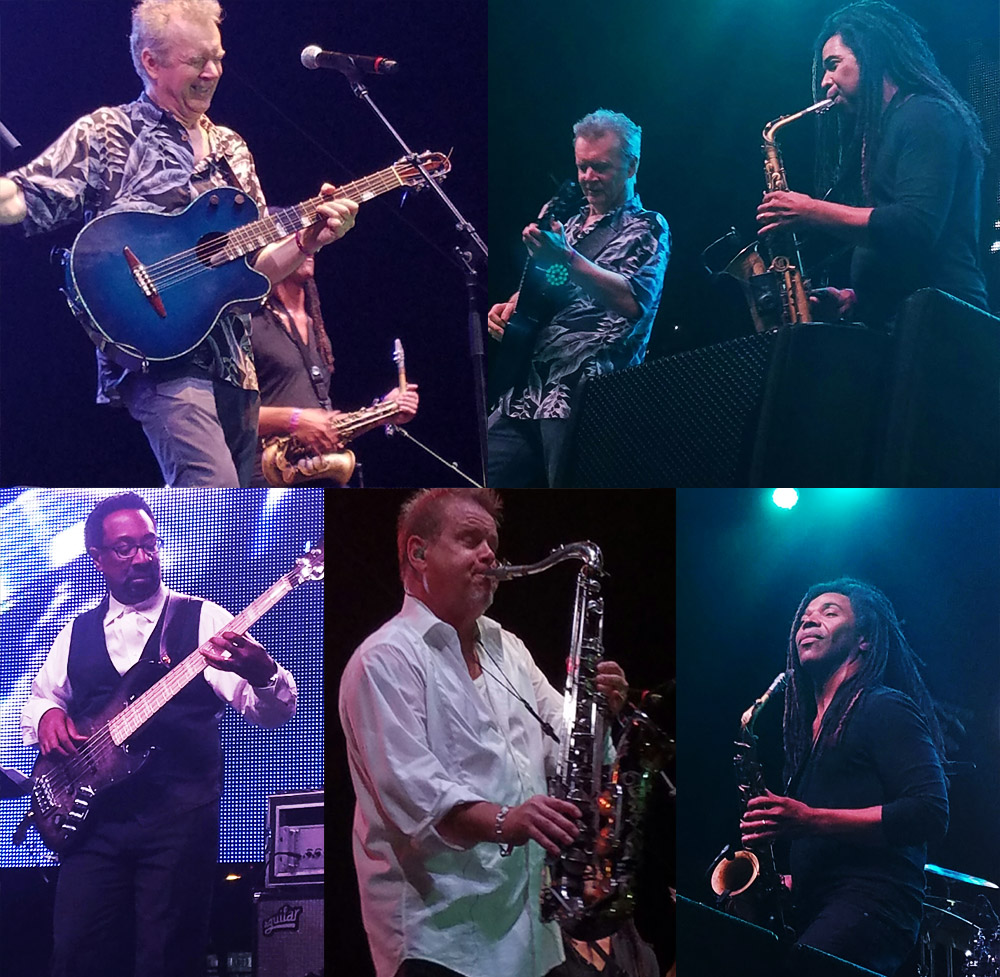 The night ended with the three Musketeers of Peter White, Euge Groove and Paul Taylor. Their ribald interaction onstage delighted everyone, plus these three artists whipped up a performance that rocked, grooved, and kicked up smoking R&B.  Euge Groove gave away his newest CD, Still Euge, Paul Taylor soared on his soprano sax, a song from his just released CD, Countdown, and Peter White clobbered us with his wah-wah picking on his blue guitar, rocking out… Papa was a Rolling Stone.

Oz Benoit, Promoter of The Long Beach Jazz Festival spoke with The Hollywood 360: “Al Williams is my father in law and in 1978, Al created Long Beach’s first venue dedicated solely to jazz when he opened the Jazz Safari by the Queen Mary. Over several years, this became a jazz institution, frequented by musicians and music fans alike. Williams became a jazz entrepreneur of sorts when he opened his second jazz space, Birdland West, in Downtown,  just ten years after that. Through his hard work and networking through the two venues he was hosting the who’s who of the music and jazz world.”

The first night of the 29th Annual Long Beach Jazz Festival ended gloriously.  Off to day two with the jazz aficionados…The Hollywood 360.

The festival is held annually at Rainbow Lagoon Park at the Long Beach Convention Center on Shoreline Drive. Gates were open at 11:00AM and the show began at noon and ended at10:30PM. For more information, artist bios and to purchase tickets visit www.longbeachjazzfestival.com.