One year ago, Nils Jiptner released his CD, Alley Cat.  Museically Inclined, Sheryl Aronson and Mikey Adam Cohen attended the concert at the very classy Vibrato Jazz Grill.  Here’s a recap of that evening.  We love Nils’s special brand of smooth jazz that incorporates slashes of rock, funk, and improvisation. 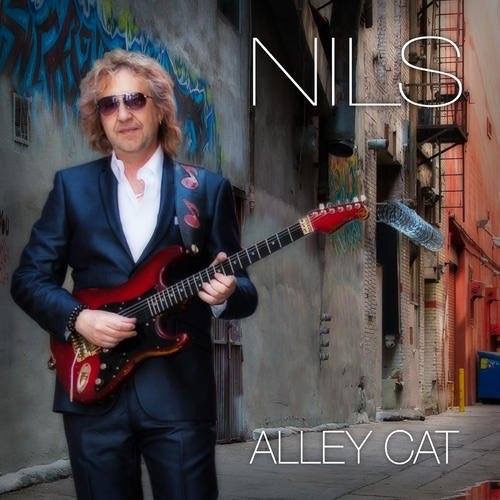 Nils Jiptner, stands tall, his lanky body sporting threads of a silk gray steel suit with a white dress shirt…his blonde curls flame around his face, long and loose; yet there’s one funky aspect to his outfit…his Alley Cat sneakers looking like a feline striped coat. “These are my Alley Cat shoes,” the artist told the audience as we all looked down at his feet and saw the hip sneaks.  Nils Jiptner didn’t just roam down this Alley; he was celebrating his CD Release, Alley Cat held at Vibrato Grill Jazz Club owned by Herb Alpert.

The décor evokes an alluring environment…splashes of blue, yellow, red, intoxicates the eye with Alpert’s modern art renditions of musicians playing…hanging from the ceiling are umbrella shaped lamps stone washed, the lighting dim…Vibrato is a lovely spot tucked away on Beverly Glenn’s high top views where you can listen to legendary and contemporary jazz bands. Dion Julian Lattimore commented on the evening festivities to Museically Inclined, “Nils made this a party tonight. You seldom get people dancing in the aisles.” “This is a venue every artist wants to perform at. It’s the most beautiful place in Beverly Hills. Everyone who comes here wants to come back and all the bands that perform here want to perform here again.”Said of his newest CD Alley Cat,

“I’m like the cat in the Alley…I went to downtown LA and shot a photo in a really dirty down Alley place… then there’s the juxtaposition of me wearing the suit… giving it a nice contrast.” 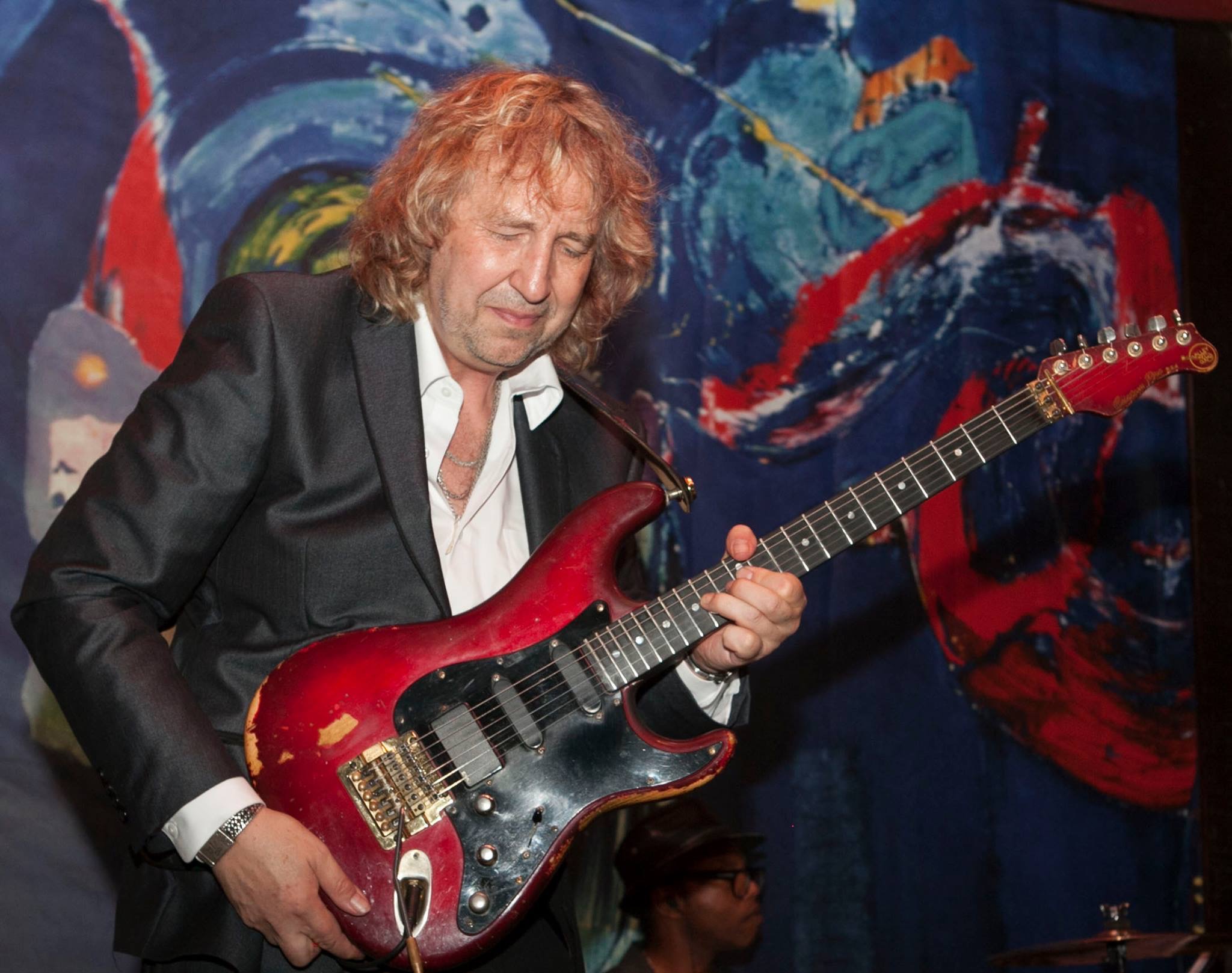 Strangely enough Nils didn’t know what funk music when he was playing a guitar as an adolescent in Germany.  When a friend asked him if he wanted to start a funk band, Nils was clueless. “I was influenced by American music.  At 18 years old I played in a rock band.  My friend asked me, “Do you want to start a funk band?  I never heard of funk.   The bass player turned me on to bands like the  Ohio Players, Earth, Wind and Fire, and George Clinton.  I lost my mind.  I loved every single note of music.”

The Alley Cat band Nils Jiptner featured tonight was Roberto Vally, bass, Donnell Spencer, drums, Clydene Jackson, keyboards and vocals, Oliver C. Brown, percussion, Johnny Britt, trumpet and Eddie Brown, vocals.  This was the first time the band had performed the new CD, Alley Cat for a live audience.  With the  precision of veteran musicianship the group rocked, funked, got soft and sweet and thoroughly entertained the packed house.  Songs like Night Flyer, Alley Cat, and Sara Smile were delivered  in a carnival like atmosphere. 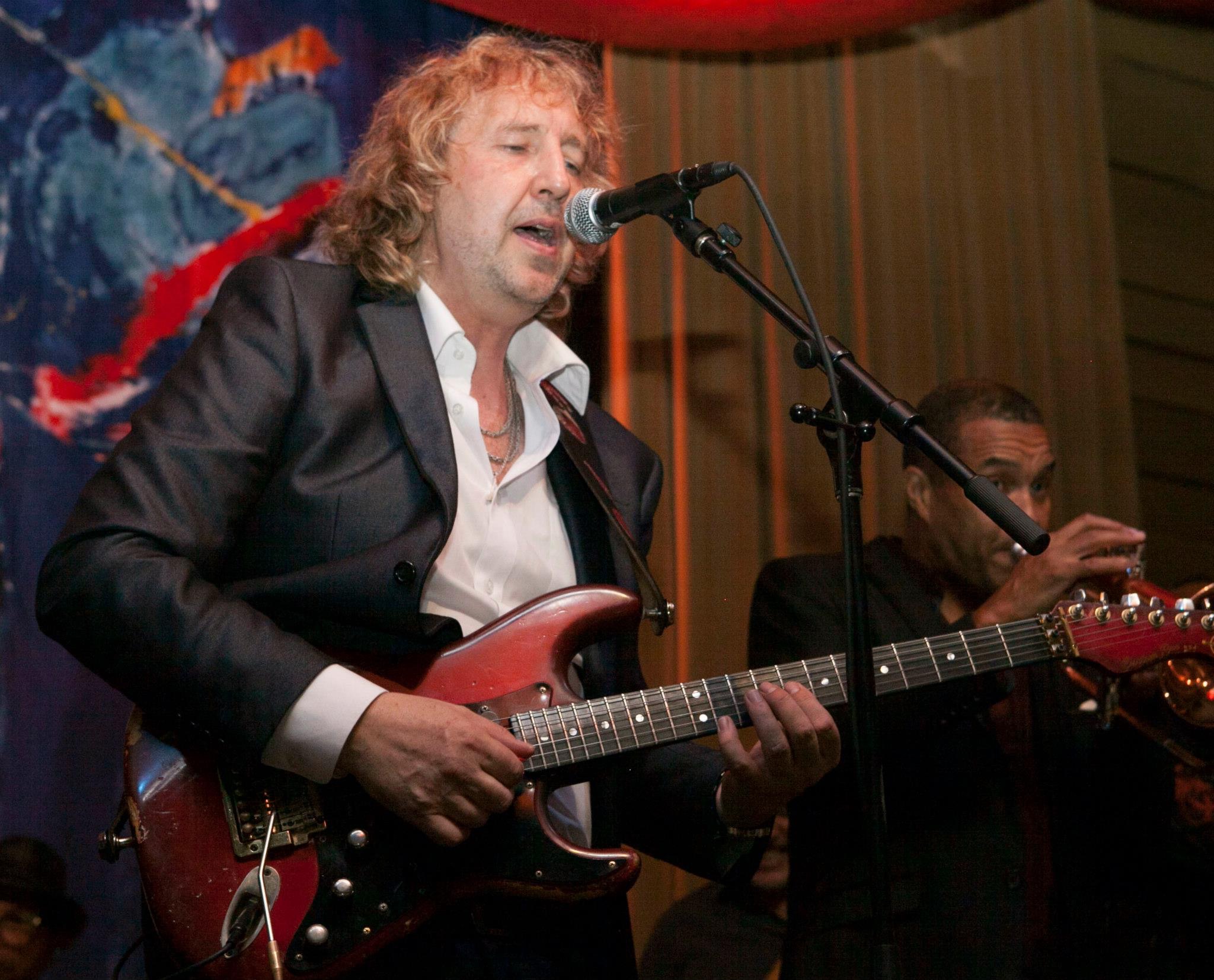 The percussionist, Oliver C. Brown moved his body and arms with graceful strokes throughout the night.  Nils appreciates this in Brown’s showmanship.  “ The percussionist is a monster up front.   He’s such a showman and so I love putting him upstage. His body language is fascinating  to watch.”

Clydene Jackson not only plays keyboards for Nils but sings on many movie soundtracks.  Her strong solid vocals that evening provided just the right amount of soulful licks to give Nils a punch of funk and soul.  Jipnter said, “Clydene is a prime  LA sessions singer.  She sang on the soundtrack of the movie, Avatar.  She sings vocals for many Disney movies g such as George Clooney’s new  movie and  James Horner has hired her.  She is technically ridiculously good.”

Johnny Britt made a special guest appearance during the two sets.  His trumpet playing detailed meticulous chops gingered with a funk groove.  He contributed his “Marvin Gaye” like voice to Don’t Hold Back along with Eddie Brown and Clydene. 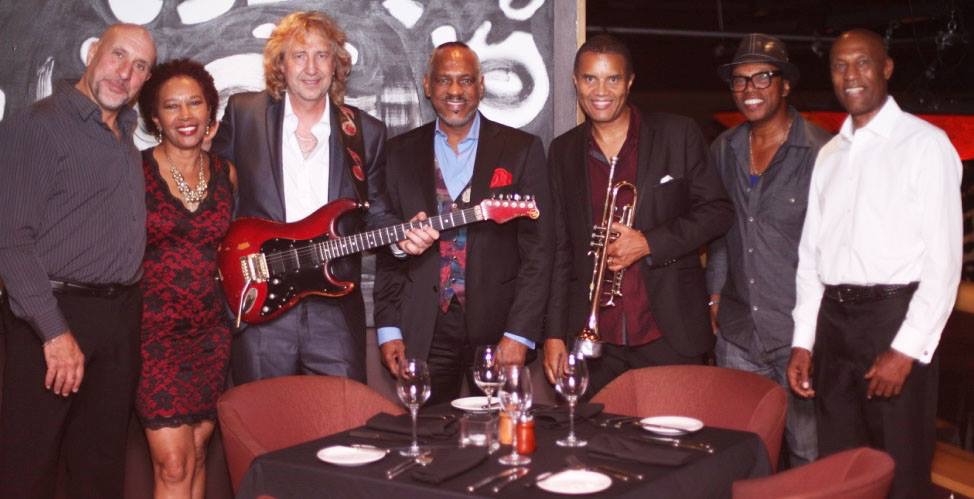 Drummer Donnell Spencer and bassist Roberto Vally kicked it into high gear all night long with their steady and powerful rhythms sections.  “ Roberto and Donnell kill it backing us all up.” said Nils.

The evening overflowed with an easy, party feel created by the hip Alley Cat. At once  Jiptner showed off his deft technique by offering a diverse river of music.  The Alchemist evoked a folk-like old world sound… then Nils broke into a lively bouncy song Summer Nights which the heat was turned up by the percussionist with his vigorous beating of the congas and ultimately a sexy romantic ballad, Two of a Kind made everyone sway in their seats.

The back story of Alley Cat emphasized the aura of the evening…originally the CD was going to be called Milkshake and the music video would have been filmed in a diner.  However, Dion Lattimore, the producer of Nils Jipnter, CD release party, had a brilliant idea for the cover of the CD.  Dion told the story, “The record label had song called Milkshake and was going to  shoot the cover in a diner.  I asked why don’t we do it in a bad setting like an alley. instead, but have Nils wear a fancy suit.   Nils said strangely enough that he had a song called Alleycat. Itall worked out perfectly.  So we changed the name of the CD from Milkshake to Alley Cat.”

At the Vibrato Jazz Grill last Sunday night, not a milkshake in the house.  All the guests, which included the infamous Tom Jones and his wife, got a taste of elegance and soul from the Alley Cat, musician, composer, producer Nils Jiptner.  When it comes to music, this guitarist has one goal for the audience.

“I don’t really like labels when it comes to music.  It really boils down to this basic concept: did you enjoy the music or not?”

For more information on Nils Jiptner: