Frida, A Stroke of Passion will open on September 15th, at the Macha Theater in West Hollywood.  The Hollywood 360 sat down for an interview with Odalys Nanin, who has written the play, co-directs,  and performs the starring role of Frida Kahlo. 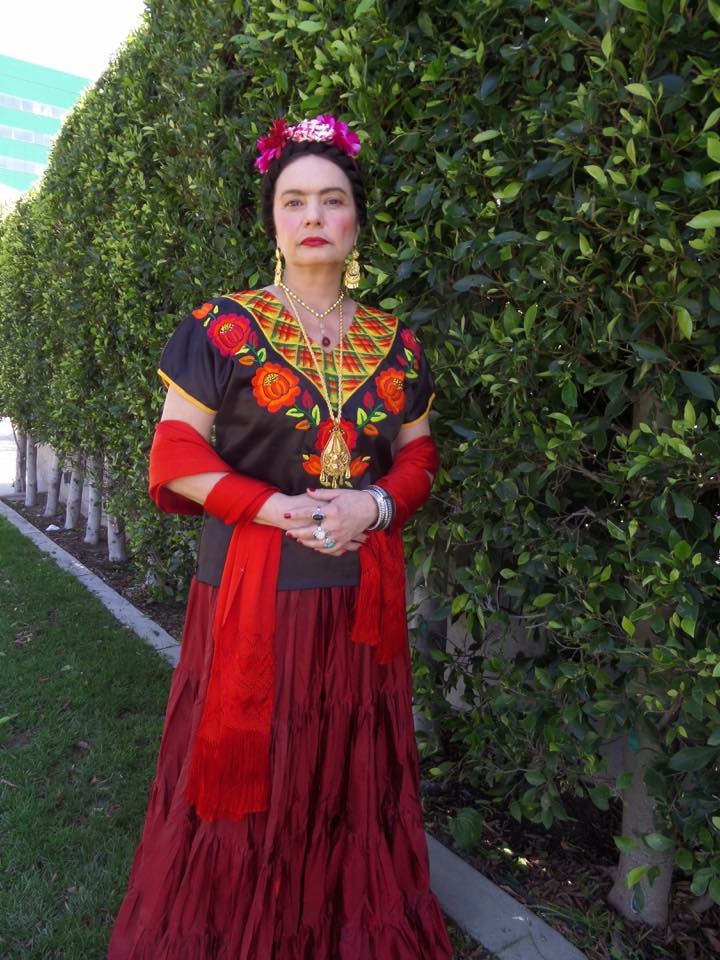 The Hollywood 360: Please first talk about the history of the Macha Theater which you have been running for the last 10 years.

Odalys Nanin: The original landlord, without letting anyone know, sold all three properties, the entire corner to a real estate investor.  They are making plans to turn the properties into condos. I decided to hire a historian and we filed an application with the Hollywood Preservation Committee to make it a historical landmark.  On September 25th there is supposedly a hearing on it,  then it goes to the City Council and they vote on it.  And if they all say, ‘Yes,’ then it becomes a city landmark both exterior and interior.  The structure will then be preserved.  The theatre is a replica of the Globe Theater in London.

The Hollywood 360:  So who was in charge of the playhouse before you?

Odalys Nanin: R. Thad Taylor was here before for 35 years.  He ran the Shakespeare Society of America.  He did the whole canon of Shakespeare’s plays.  I want to preserve it because Theatre is disappearing in West Hollywood.  When I first got here there were around 8 theatres, now there is only this one and the Coast Playhouse.  But the City bought the Coast,  so basically, the only independent theatre left is me. 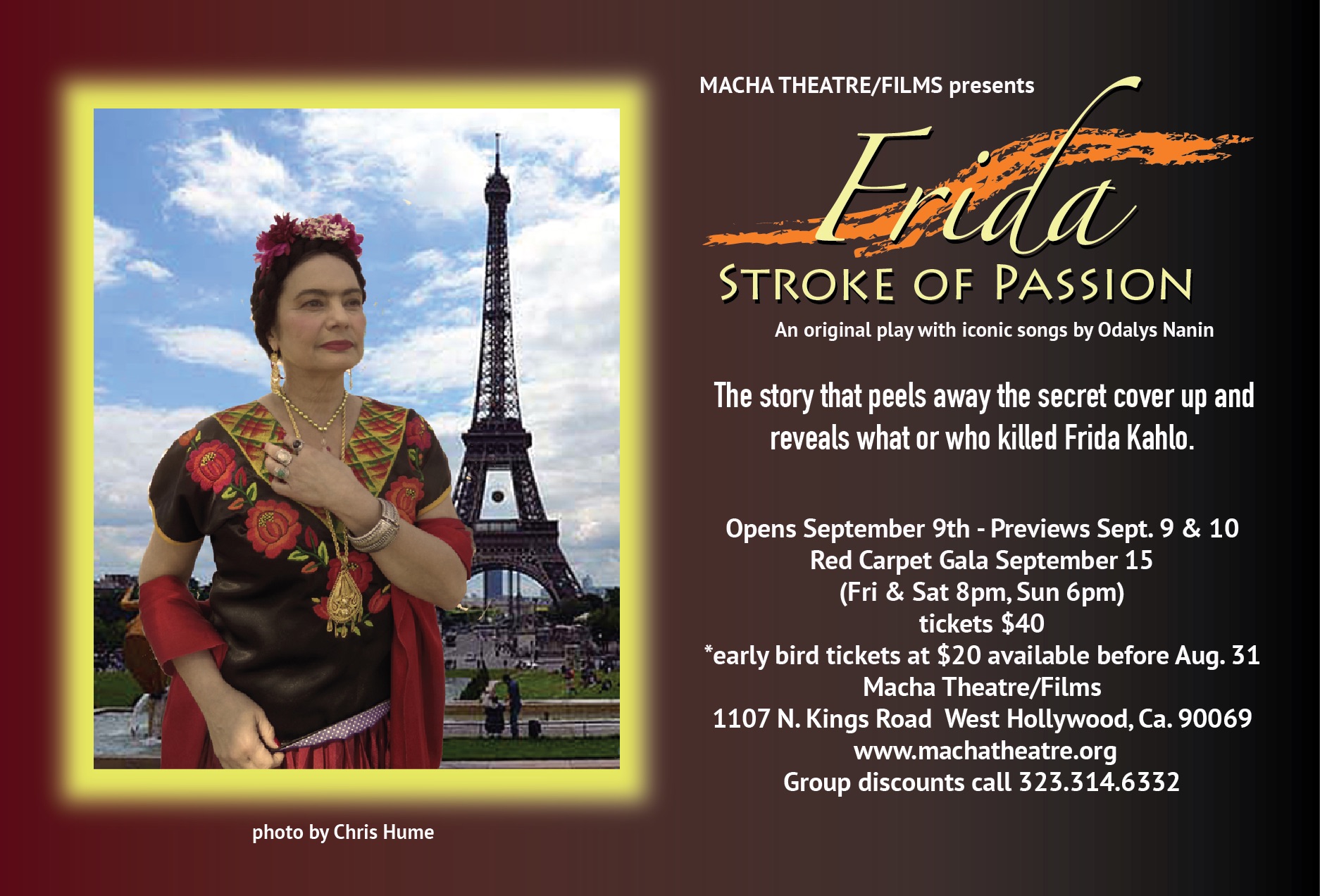 The Hollywood 360:  When did you take over the actual being in charge?

Odalys Nanin: R. Thad Taylor passed away in 2006.  I was supposed to do a play called “A Skin of Honey,” because I got a grant to do the play from the city.  When I called to come in, somebody told me he was in the hospital and no one knew what was going to happen to the theatre.  Then it became my mission to find out who owned the space, then I did, and R. Thad Taylor passed away.  I did a lot of paperwork.  I talked to the original landlord and negotiated a 10-year lease.  I came in and refurbished it and upgraded it.  I got theatre seats that were 1941 vintage theatre seats.  I redid the stage floor and did many other upgrades.  I invested about 80,000 into the theatre.

The Hollywood 360:  So you have been running a lot of plays throughout your stay here.

Odalys Nanin:  I’ve written 11 plays and I’ve produced them all.  I do co-productions then I have other people that come in association with Macha Theater to do plays as well.

The Hollywood 360:  Talk now about your upcoming play Frida which will be premiering in September.

Odalys Nanin:  It’s called Frida, Stroke of Passion.  A lot of my friends wanted me to write about Frida but I felt everybody has written about her.  I wanted to write about something else – There must be a secret behind the person.  I did research and concentrated on the last week of her life.  I discovered things about her that most people don’t know about.  I am dealing with what her mental, physical and spiritual conditions were. It’s a series of flashbacks into moments of her life with Diego Riveria, Josephine Baker, and Leo Trotsky is a ghost in the play.  She is in the process of deciding whether she should die and leave this earth and how she is going to do it.  I made it like a Who dun nit play. She had her right leg amputated and she was most of the time on Demerol, drunk or high on something.  But I also found the comedy in the situation.

Odalys Nanin:  In the wheelchair, the bed on crutches.

The Hollywood 360:  It’s interesting to play a character in these positions and to be able to manifest the emotions and the drama.

Odalys Nanin:  When I was writing that I wasn’t thinking about that I was thinking about the story and how to make it enlightening.  But then when I became the actress… I was thinking, ‘Wow.’ I’m in the bed, I’m in the wheelchair, I’m using crutches, and I began to feel like how horrible it was for her to be so disabled.  I could see why she would commit suicide.  There’s a cover up in her story.  She was cremated so quickly … I think they were covering up the fact she committed suicide. 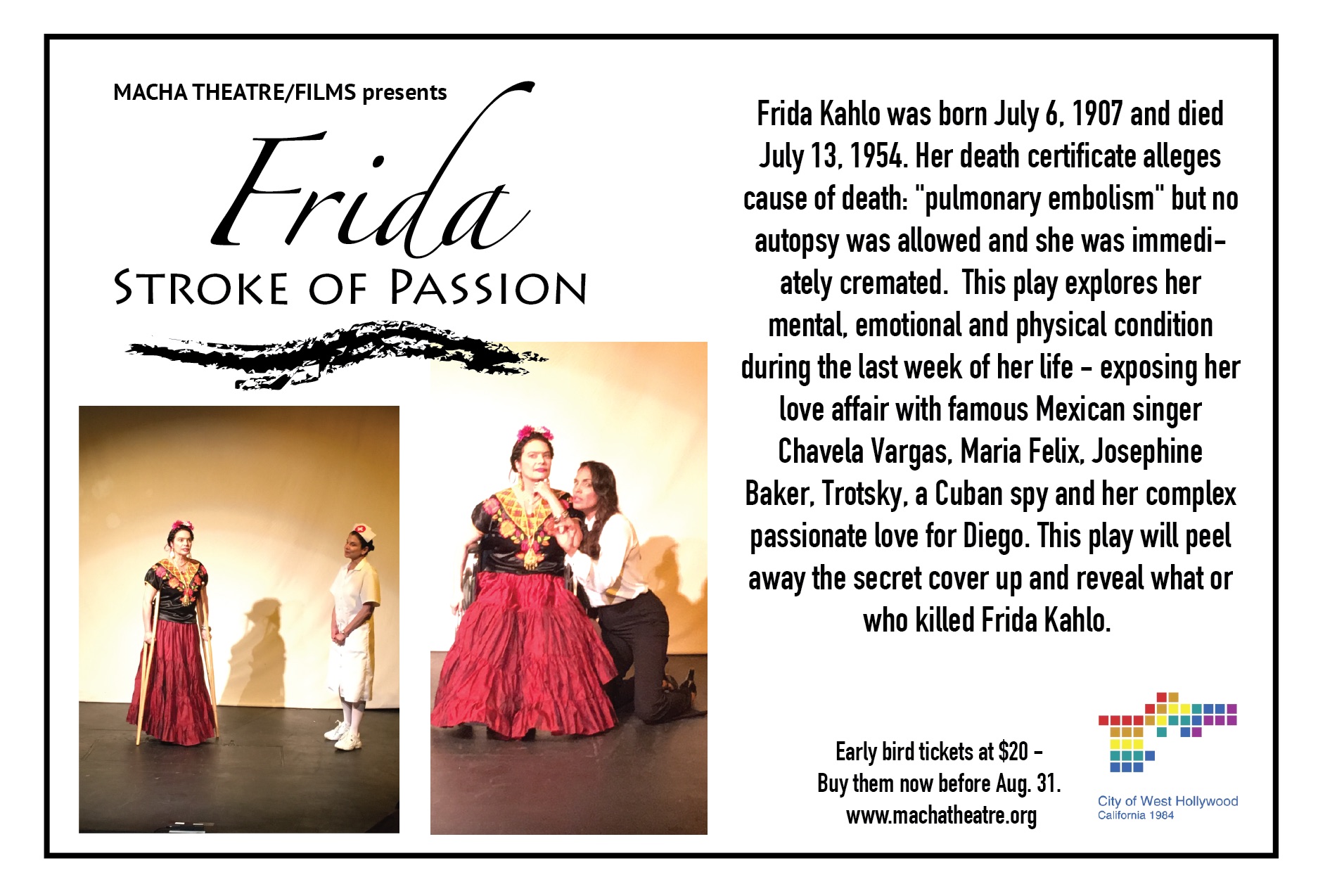 The Hollywood 360:  What was the most challenging aspect of playing Frida?

Odalys Nanin: Writing the play was challenging.  Usually, I can write something in two to three weeks.  But this was piece by piece.  I thought it was interesting that I could only do it this way but then I got to thinking about the fact that she was a handicap person and could only paint two hours at a time.  Then rest.  I wondered if that had some kind of karmic influence on my writing.  It was very methodical when I  really think about it.

The Hollywood 360:  What was the most fun aspect of playing her?

Odalys Nanin:  She gets to throw crutches, she gets to drink brandy and romp around with all these women, there’s alot of music and dancing.

The Hollywood 360:  How many people are in the play?

Odalys Nanin:  There are 10 people.  They are all interconnected and bring something to the play.

The play happens in her bedroom.  The only real people are the Nurse, Diego, and her servant. The other characters happen in her mind.

Odalys Nanin:  I co-direct.  The Director is Nancy De La Santos.  The set is very interesting.  It’s all threads.  The bed in a centre piece.  I am going to have a video camera so when she is putting lipstick on, you are going to see it on the screen.  We will be projecting some of her paintings onto the screen as well.  There is a live guitarist on stage.  There is a tango dance.  There is also a screen that when you light it you can see the characters behind it.

The set has these threads so when Frida comes through the window, she stretches the threads.  It makes it very surreal.  You’re entering into her room, her house, her world.

The Hollywood 360:  When does the play open?

Odalys Nanin:  We have previews, September 9th.  We officially open on September 15th and we will run Friday, Saturday at 8 pm. And Sunday at 6 pm.  It will go on until October 1st.

For more information about “Frida, A Stroke of Passion” :