Excitement was in the air as a line started to form early Saturday morning – Aug. 12th, in the 400 block of 1st. in Long Beach, [Ca.] a few hours before the start of LB’LIFE / the Hood Santa’s 2nd Annual Back 2 School Backpack Giveaway, held at 1897 [LB] Store 438 E. 1st., in a collaborative effort between Multi-Platinum music producer Francisco “Tito” Rodriguez, known for his philanthropic [charity] work as The Hood Santa, and his childhood friend [also of LB] Jose Mercado, known through his graffiti and artistic moniker as Dire One, who in 2013 launched the famed [1897] LB Homegrown Clothing Brand.

Every [predominately] kindergarten and elementary school student who waited in line, left happily with a free backpack stuffed with school supplies, as was the case with Lil Seno Mayor [4 yrs. old], who was brought to the event by his father.

“First, it all came about because of Tito, Tito had an idea. I had been thinking about it, it was two years since I had opened the business, and felt the shop, myself, and the people that are involved with the shop, that we needed to get behind something. I had been thinking about it in my head, sure enough Tito got a hold of me, and said ‘I got an idea,’ I’m thinking about a backpack giveaway, and I said… that’s it, that [idea] was perfect for us to get involved with, ” explained Dire One, of how the first backpack giveaway in 2016, came about. “The community supports us a lot, since we sell a lot of product that is Long Beach based, we get a lot of people from the city that come here and support, so I felt is only right to now give back to kids that are from the city. When Tito put it out there, I thought it was the perfect answer to something I had in my mind, as far as giving back, and then he got it going. I was trying to plan it all out, and [Tito] said… no [no], let’s do this, and sure enough – I think is was in like three weeks or a month, and It was amazing to see how many of our customers came to support without us asking, how many of our friends showed up, to help. Showed up with supplies the day of the event, right after the event we sat there, for me It was like magic. It was magical to see  the people come together without us asking because they liked what we were doing and they saw us executing what we said, we were going to do. That was it for me, it was about giving back to the kids, to the city that I grew up in.” 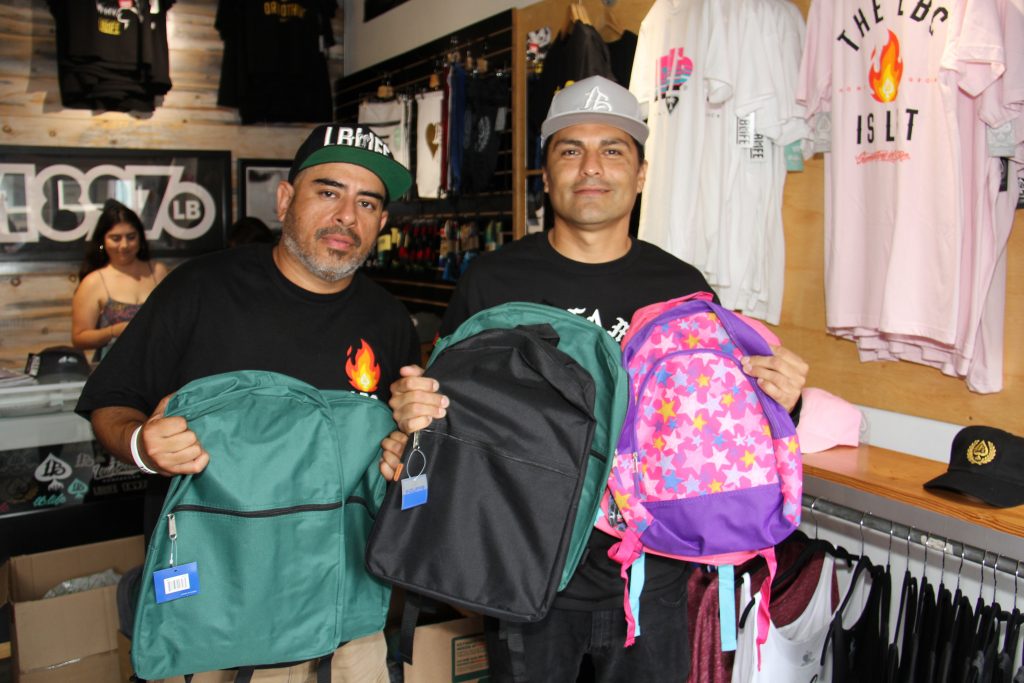 Aside from the line which [pretty much] blocked the sidewalk in anticipation of the free backpacks stuffed with school supplies, custom Harley Davidson motorcycles parked in front of the 1897 [LB] Brand store gave attendees and onlookers a show. The bikes belonged to the Long Beach based Dirt Bags Motorcycle Club, who donated school supplies and made their presence felt in [total] support of the event.

“Upon finding out through social media the Dirt Bags [MC], contacted us within hours, explaining we live and have businesses in Long Beach, and want to support and be part of what you’re doing,” added Dire One.

After having photographed performances of over four hundred and fifty [different] Latin music artists, I'm either known by my first name: Fredwill, or as "Latin music's photojournalist." CEO/Pres. of Spanglish Entertainment, LLC [a Latin music record label with a management and publishing arm --distributed by Create Music Group] @spanglishent.llc