Last year I had the honor of covering Larry and Luisa Dunn at the Southern California Health and Education Scholarship Dinner and Dance.  Here’s the article on that evening.

Larry and Luisa Dunn were honored last Saturday night at the Southern California Health and Education’s Annual Scholarship Dinner and Dance.  The occasion was to celebrate the 49 years of independence of Barbados as well as give out scholarships to deserving students and awards to community leaders. 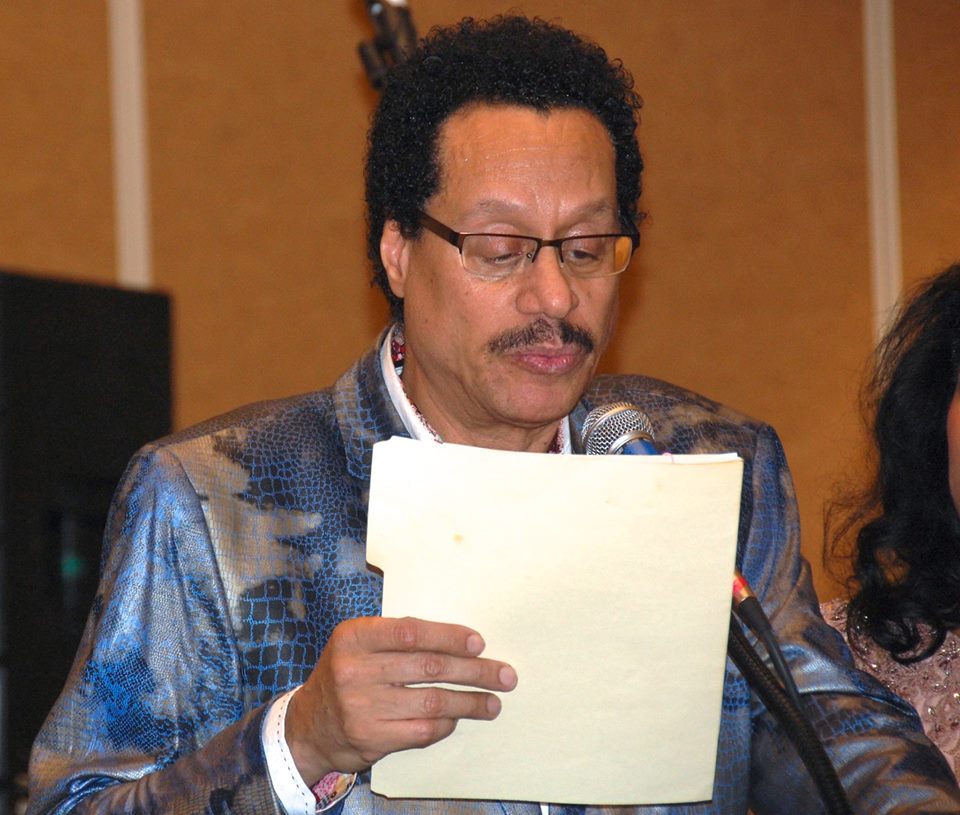 Larry Dunn expressed his gratitude for being invited to this historic event.  “The people of Barbados have so much integrity, love, peace and dance in their culture.  I am so appreciative to have been here tonight with Luisa and celebrate this momentous event.”

April Sutton, Mistress of Ceremonies, greeted the audience with an invocation and introductions to all the esteemed people attending the affair.    “We have a lot of interesting people here at this event. We want to say hello Citizens of Labagou, the Barbados association of Southern California. The Caribbean Heritage Organization, Honor Consulate of Barbados….” 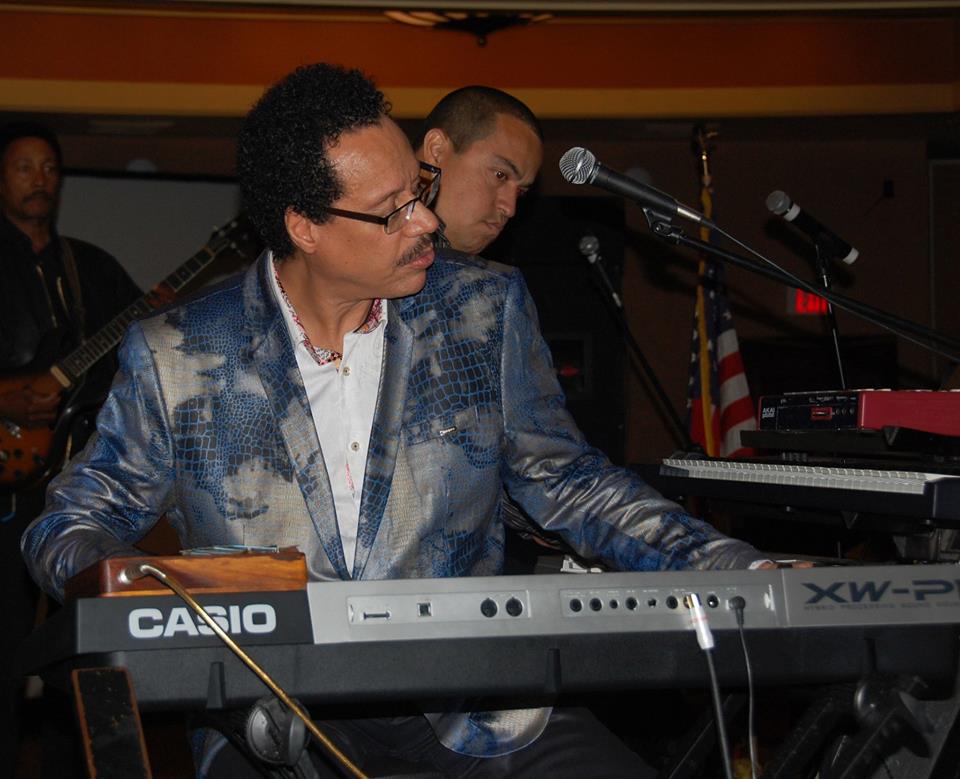 The dining hall bloomed festive as the colors of Barbados, ultramarine blue and gold donned the tables.  A tiny Barbados flag was also given as table favors for each guest. A delicious dinner was presented and the program began afterwards.

Mr. Martin Greenridge, President of the SCHE and organizer of the event told the audience, “It just feels like yesterday when we started our organization.  We are all looking forward to next year where we can do it real big for the 50th anniversary.  Enjoy, relax and have a good evening.”

In the program for the evening’s activities, Mr. Greenridge wrote, “The gifts that we are blessed with as Barbadians allows us to make everything and everyone around us better no matter where we are.  As we celebrate our independence, let us do so in a manner that will encourage, inspire and promote true love to everyone around us.”

A Scholarship was given out to Rhema Francis to pursue her college education, a Service Award was given to Marva Herman, who is the Executive Director of the Caribbean Heritage Organization, a Community Service Award was given to Lloyd Estwick, who formed the California Caribbean Chamber of Commerce, and the SCHE Scholastic Outreach award went to Araceli Salazar, who is a 4th grade teacher at Robert Lee Elementary School. 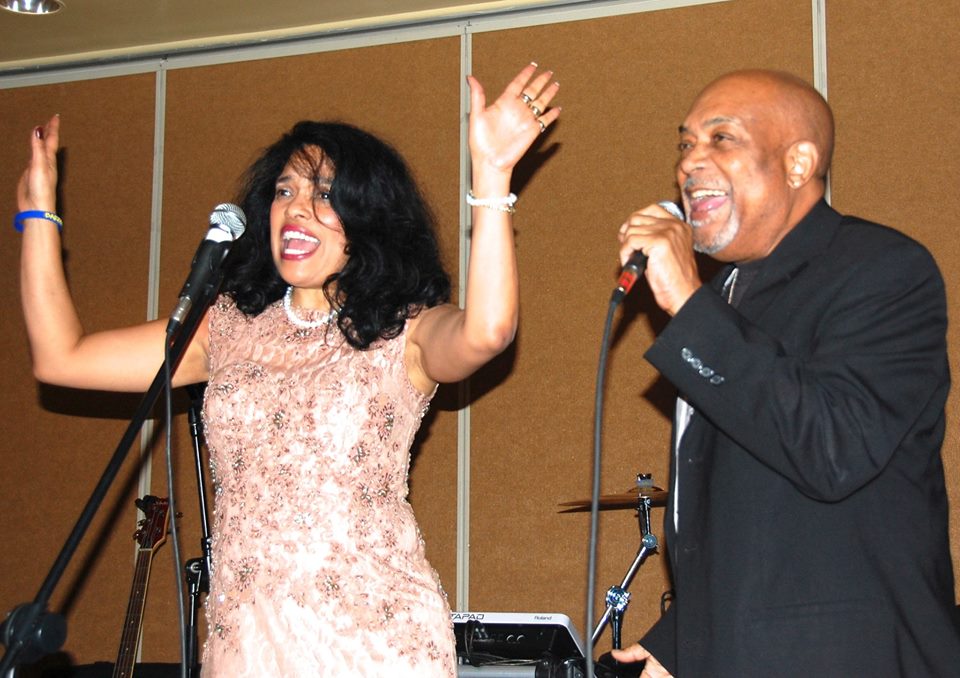 April Sutton then introduced the Dunns by saying, “The Dunns have been married for thirty two years and in Hollywood, this is amazing.”

Larry Dunn is a six time Grammy Winner, has had thirteen Grammy nominations, has sold over 100 million albums worldwide with Earth, Wind and Fire, has received four American Music Awards, has a Star on Hollywood’s Walk of Fame, and has been inducted into the Rock and Roll Hall of Fame as well as the Songwriters Hall of Fame.  However, no matter how decorated this brilliant musician has been by the music industry, Larry Dunn contributes his success to his beloved wife, Luisa Dunn.  Since 1988, Larry and Luisa have been involved with production projects, writing music for Japanese television commercials, film, and studio work.  At the present time, Luisa Dunn is working on a solo album that Larry is producing.

His face shines with love when talking about her.  Mr. Dunn said, “They say behind every great man is a great woman, well behind me is a greater woman…women get stuff done.  Luisa has had to put up with me for 32 years.” 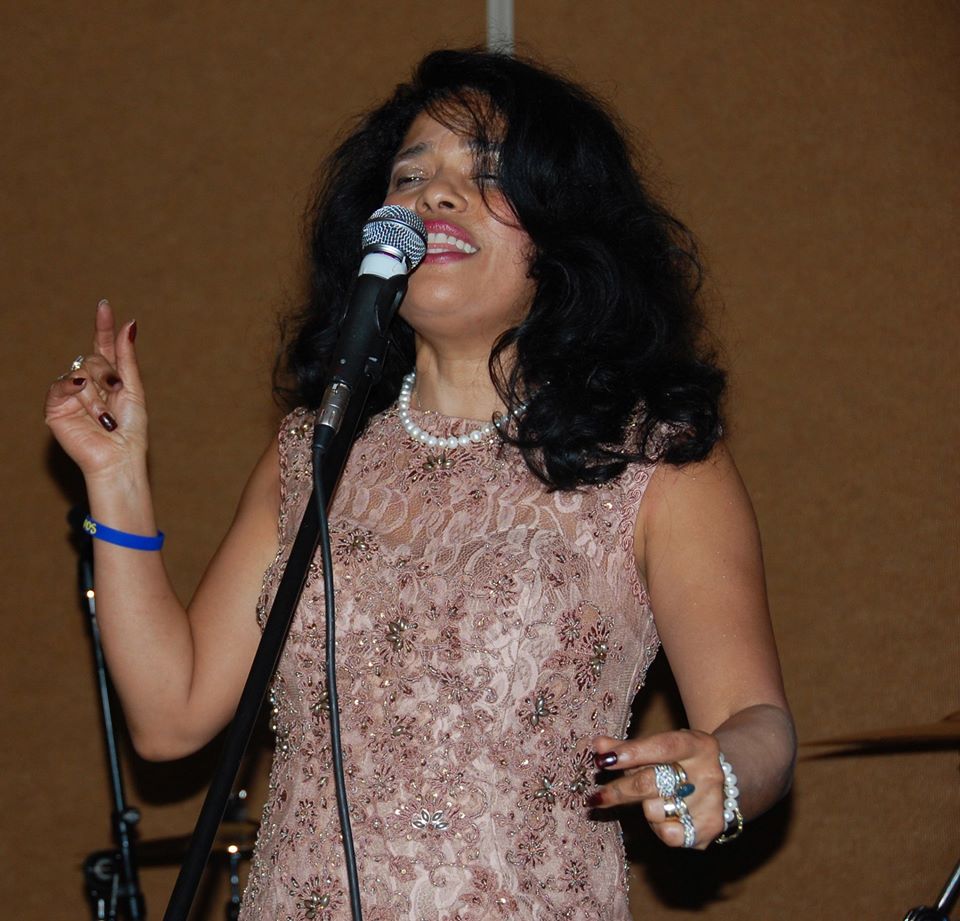 Luisa Dunn looking dazzling in a Sue Wong pink beaded gown, also showered her affection and love for her husband.

“He’s an amazing man…I prayed for this man … I told God, send me a great man with a good heart, a man of God. and someone who doesn’t like sports.” ( Laughter.) “Larry and I are honored to be here tonight to celebrate 49 years of independence for the beautiful country of Barbados.   Tonight we are giving you the gift of music.”

Luisa asked the Band Caribbean Dynamics by DJ Vince to stand up.  The audience applauded these musicians who were going to play one song with Larry Dunn then play Caribbean music for the evening’s festivities.

Larry Dunn smiled at everyone and finished his speech by saying, “I brought some talented brothers that have been singing with me for a long time, Leslie Smith and Procton  Bonnell, plus my lovely wife.  We will perform for you.  It’s more important to hear us, then see us.  The people of Barbados know how to dance so we want you to da

nce to our music.” 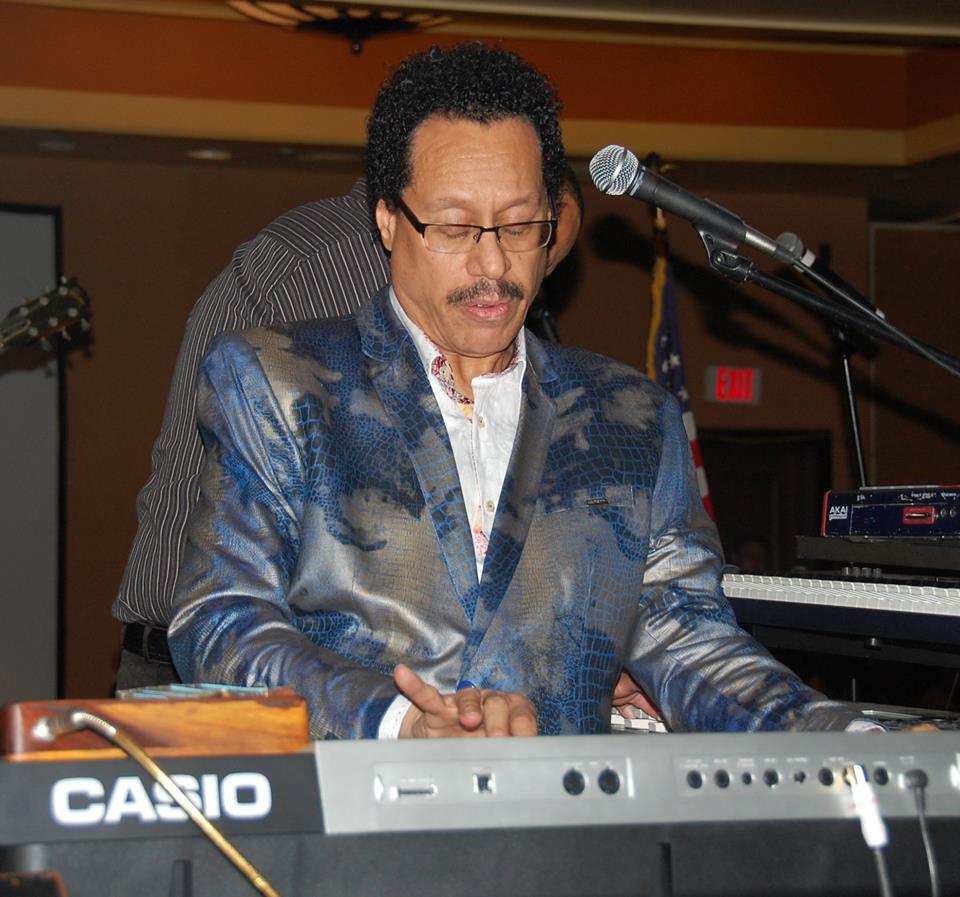 He continued…”Luisa and I want to say a special thank you to Martin Greenridge and Marcel Greenridge for having us.  And the Ambassador …thank you to the beautiful and talented April Sutton.    The level of work ethic and integrity that people of Barbados bring has been long been underestimated. We thank you for it…(Pause) and they actually got a band with not one Kardashian in it.”

That was the signal for Larry Dunn to play with the Band Caribbean Dynamics by DJ Vince.  The master keyboard player called off chords as he powdered the keys with the inimitable selective sound his hands create.  Then Larry plucked the Kalimba and added an African slice of rhythm and enchanting music to the Caribbean melody.

The audience was then treated to two hit songs by Earth, Wind and Fire: Boogie Wonderland and September performed by Larry Dunn on keyboards and Luisa Dunn, Procton Bonnell, and Leslie Smith vocals.  The hall erupted with the funky beat of the music and everyone jumped out of his or her seats to dance. 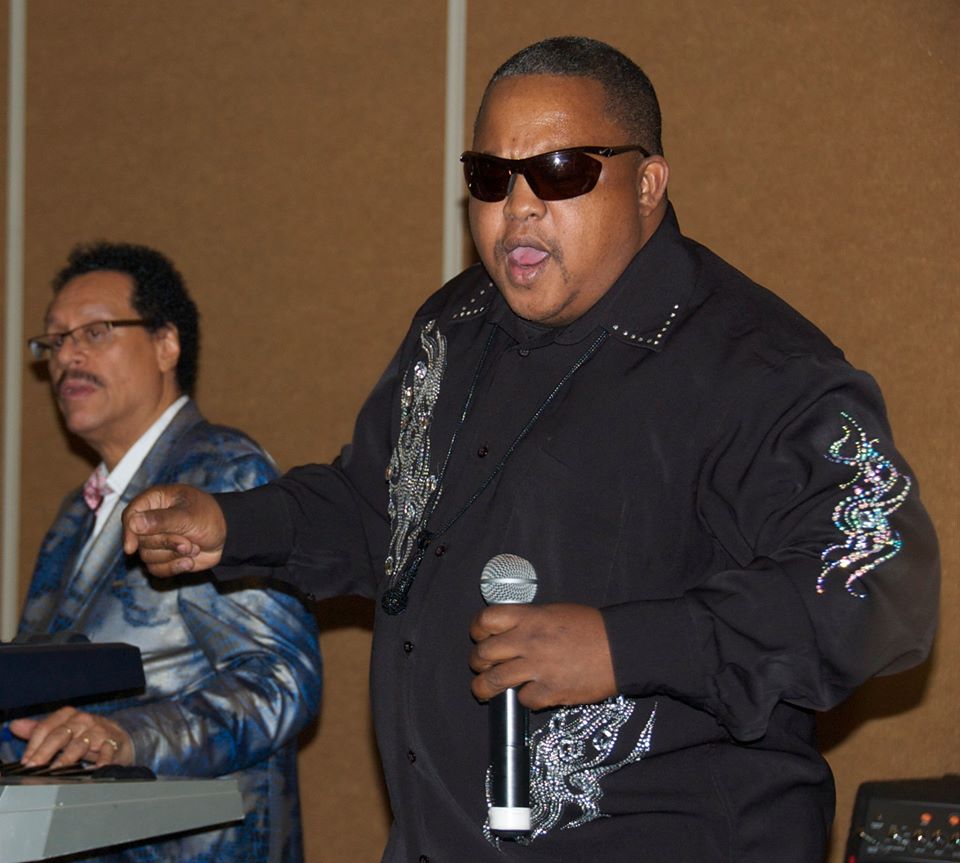 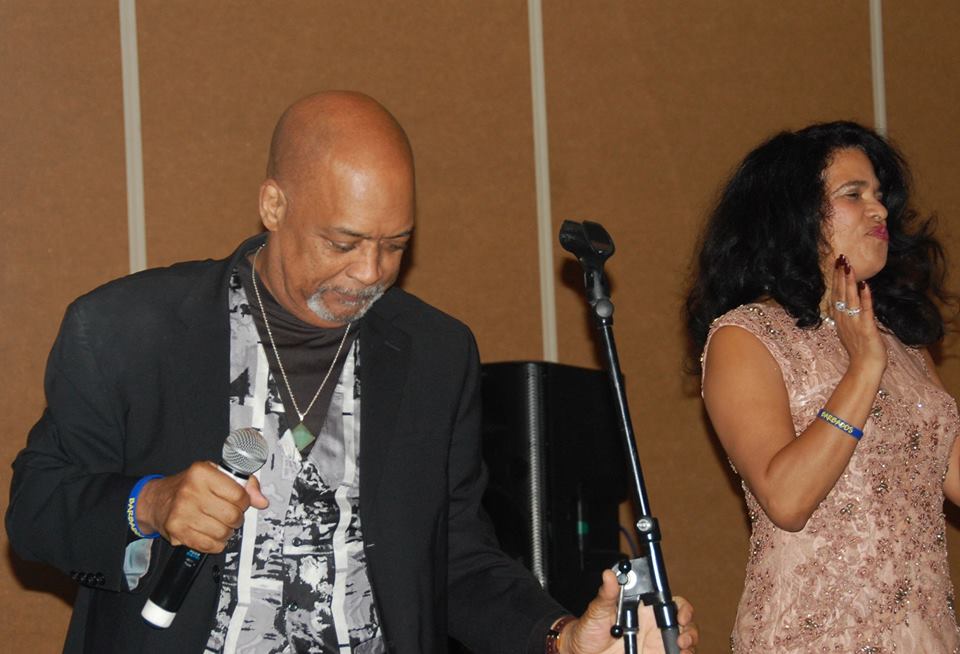 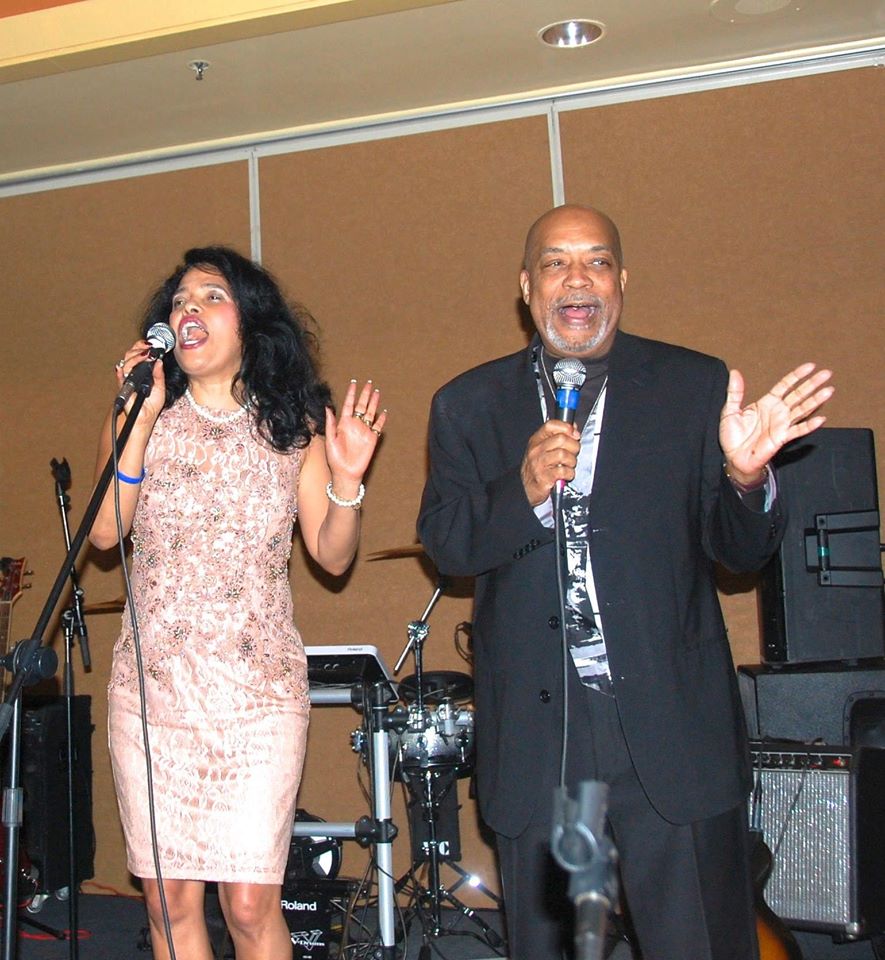 The rest of the evening bounced and bubbled with the island beat of the Band Caribbean Dynamics by DJ Vince as the crowd danced the night away.

“It was amazing just to see people who are here tonight celebrating the history of their country.  Plus to see these young people get scholarships to further their education given by Mr. and Mrs. Greenridge.  This couple is doing great things for their community and are helping to unify all of us from the country of Barbados to the United States,” said Luisa Dunn summing up the evening.