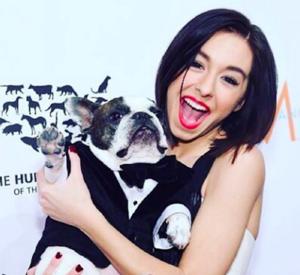 Singer Christina Grimmie gained fame for her appearance as a contestant on the TV show ‘The Voice’. She was fatally shot at a VIP Meet & Greet following her concert in Orlando, Florida Friday evening, when a man carrying two handguns and a hunting knife opened fire on Grimmie. She was rushed to the hospital where she later died. She was 22.

Following the shots, Grimmie’s brother, Marcus Grimmie, reportedly tackled the shooter, who then took his own life. Marcus Grimmie was hailed as a hero for preventing the gunman from possibly firing at any of the nearly 120 people who were waiting to meet Christina. According to St. Petersburg, Florida, police, the man who shot and killed Grimmie was Kevin James Loibl, 27.  No possible motive was given. ( We’ve opted not to publicize his photo.)

Later that evening Grimmie’s team released the following statement: “It is with a heavy heart that we can confirm that Christina has passed and went home to be with the Lord. She was shot at her show in Orlando and, unfortunately, didn’t survive the gun shot wounds. We ask at this time that you respect the privacy of her family and friends in their time of mourning. If you’d like to give back to Christina’s family in her memory, please consider donating to the families GoFundMe page in their time of need. https://www.gofundme.com/christinagrimmie.”

Today CNN affiliate WFTS photographed a handwritten note posted on Loibl’s home. The note reads, “Deepest sorrow for lost (sic) to the family, friends and fans of the very talented, loving Christina Grimmie. No other comments”

The Plaza Live issued a statement extending condolences to the victims and indicating all activities and events have been suspended “until further notice.”

“Our thoughts and prayers are with the families of those lost as well as those that witnessed and aided in the recovery after this senseless act,” the statement said.

One of her friends and mentors was singer Selena Gomez, who tweeted: “My heart is absolutely broken. I miss you Christina.”

My heart is absolutely broken. I miss you Christina pic.twitter.com/KWGwZZlj4t

The band that was touring with Grimmie, Before You Exit, said on Twitter that its members are heartbroken.

Today we lost an angel, sister, and a beloved friend. #RipChristina pic.twitter.com/EkwTKsaLFr

ORLANDO!! Come out to the show tonight at the Plaza Live! Starts at 7:30!😎 pic.twitter.com/0D4mNupCTi

Taken much too soon. She will be missed.