Pandora has the unique ability to determine which artists will resonate best with local listeners by analyzing musical preferences, stations created, and thumbed-up songs. Invitations to events are then extended to Pandora listeners who have demonstrated an affinity for the identified artists. 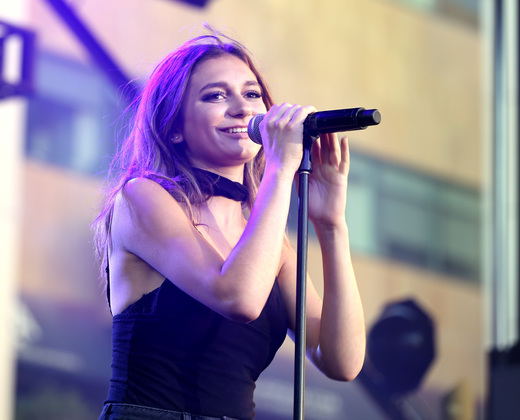 If you couldn’t make it, here are some of the highlights.

Pandora is the world’s most powerful music discovery platform – a place where artists find their fans and listeners find music they love. We are driven by a single purpose: unleashing the infinite power of music by connecting artists and fans, whether through earbuds, car speakers, live on stage or anywhere fans want to experience it. Our team of highly trained musicologists analyze hundreds of attributes for each recording which powers our proprietary Music Genome Project®, delivering billions of hours of personalized music tailored to the tastes of each music listener, full of discovery, making artist/fan connections at unprecedented scale. Founded by musicians, Pandora empowers artists with valuable data and tools to help grow their careers and connect with their fans.

ABOUT 5 SECONDS OF SUMMER

Hailed as the “biggest new rock act in the world” by Rolling Stone, 5 Seconds of Summer is the only band (not vocal group) in history to see its first two full-length studio albums enter the Billboard 200 at No. 1. They played their first gig in late 2011, performing for about a dozen people at a hotel in their hometown of Sydney, Australia. Three years later, 5 Seconds of Summer headlined the Forum in Los Angeles, where they played for 25,000 fans during a sold-out, two-night stand. 5 Seconds of Summer’s self-titled debut album entered the Billboard 200 at No. 1 in July of 2014 and has since sold more than three million units worldwide – with 1.5 million albums and more than 4.5 million single tracks sold in the U.S. alone. 2015’s Sounds Good Feels Good, the follow-up, charted at No. 1 in 12 countries, including the U.S., the U.K. and Australia. In December 2015, 5 Seconds of Summer’s first official DVD/Blue-ray – How Did We End Up Here? – Live At Wembley Arena – went to No. 1 on Billboard’s Music Video Sales chart. It was the highest-selling music DVD of 2015. The band has won an American Music Award, a People’s Choice Award, an iHeartRadio Music Award, five MTV European Music Awards and an MTV Video Music Award. The band is currently on their “Sounds Live Feels Live” world tour.

Fergie, an eight-time Grammy Award-winning multi-platinum solo artist and vocalist for The Black Eyed Peas, is putting the finishing touches on the follow-up album to her 2006 solo release The Dutchess. Her debut single, “M.I.L.F. $” from her forthcoming sophomore album, debuted at Number 2 on the iTunes chart and has racked up over 50 million YouTube / VEVO views since its release. Fergie’s solo album debuted at No. 2 on the Billboard Top 200 and spent 94 weeks on the chart. The Dutchess went on to sell 6.2 million copies and 28.5 million tracks worldwide and spawned three No. 1 hits on the Hot 100: “London Bridge,” “Glamorous,” and “Big Girls Don’t Cry,” as well as the Top 5 singles “Fergalicious” and “Clumsy.” In 2014 she released the multi-platinum single “L.A.LOVE (la la)”.  Fergie also released four multi-platinum albums with The Black Eyed Peas, with whom she has sold more than 32 million albums and 60 million singles worldwide. Her highly anticipated second solo album will be released later this year.

Seventeen-year-old breakout musician Daya [pronounced “dey-uh”] is driving pop music down a different path and was named one of Pandora’s Artists to Watch in 2016. Her latest single “Sit Still, Look Pretty” is currently climbing the charts, sitting in the Top 20 on the iTunes Pop chart and Top 25 on the Billboard Pop chart. Featured on her debut EP Daya, her first single “Hide Away” is platinum-certified – and quickly approaching double platinum status -notching Top 10 and Top 25 spots on Billboard‘s Pop Songs and Hot 100 charts, respectively. Daya’s distinct vocals are also featured on The Chainsmokers’ single “Don’t Let Me Down,” which hit #1 at pop radio and currently sits at #3 on the Billboard Hot 100 chart. Daya has taken 2016 by storm, with Rolling Stone naming her one of their “10 New Artists You Need to Know,” and InStyle including her as one of the “6 Indie Artists You Should Be Listening to in 2016,” as well as a number of high-profile performances on TODAY Show, Good Morning America, the Radio Disney Music Awards and at the White House’s annual Easter Egg Roll. She is currently on tour throughout the country, and is slated to release her debut full-length album on ArtBeatz by the end of 2016.  For more information, visit www.theofficialdaya.com.