Cinelicious Pics will release on Blu-ray and DVD its new 4k digital restoration of director Leslie Stevens’ long-missing 1960 thriller PRIVATE PROPERTY, starring iconic American character actor Warren Oates (TWO-LANE BLACKTOP, THE WILD BUNCH) in his first significant screen role. A major rediscovery for noir and crime fans, PRIVATE PROPERTY had essentially vanished following a very brief release in the early 1960s — until now. The Blu-ray will be available on October 11 (and for pre-order on September 13). 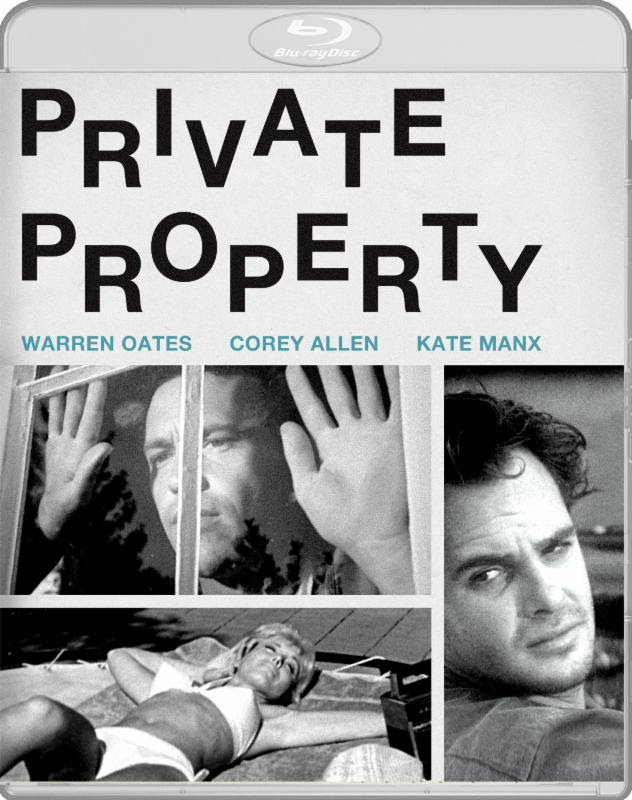 PRIVATE PROPERTY begins as two homicidal Southern California drifters (played to creepy, Peeping Tom perfection by Warren Oates and Corey Allen) wander off the beach and into the seemingly-perfect Beverly Hills home of an unhappy housewife (Leslie Stevens’ real-life spouse, Kate Manx). Shimmering with sexual tension and lensed in stunning B&W by master cameraman Ted McCord (THE TREASURE OF THE SIERRA MADRE, EAST OF EDEN), PRIVATE PROPERTY is both an eerie, neo-Hitchcockian thriller and a savage critique of the hollowness of the Playboy-era American Dream.

Warren Oates delivers his first great screen performance here as one of the murderous vagabonds, years before he emerged as one of the finest character actors of his generation; his bizarre, voyeuristic Lennie-and-George relationship with the underrated Corey Allen (James Dean’s hot rod rival in REBEL WITHOUT A CAUSE) is fueled by a barely-suppressed homoeroticism. Shot almost entirely in the Beverly Hills home where director Stevens and lead actress Manx lived at the time, PRIVATE PROPERTY is a simmering thriller tinged with deeply unnerving elements of autobiography–and all the voyeurism anyone could ask for.