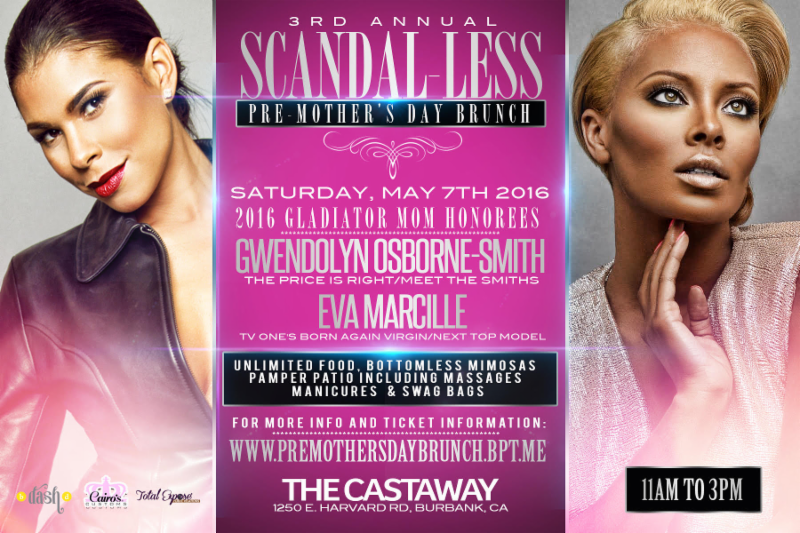 This year, Gwendolyn Osborne and Eva Marcille will be toasted at a brunch organized to honor prominent women who lead by example with success in both business and motherhood.

They doubtless were Thark warriors who had been sent out to capture us, and we breathed a great sigh of relief that they were traveling in the opposite direction. Quickly lifting Dejah Thoris from the thoat, I commanded the animal to lie down and we three did the same, presenting as small an object as possible for fear of attracting the attention of the warriors toward us.

April 5, 2016 – Los Angeles, CA – Total Expose PR and Cairo’s Customs teamed up with bDASHd Events and will once again bring the 3rd Annual Scandal-Less Pre-Mother’s Day Brunch to life in Los Angeles. This year the event will be held at The Castaway Burbank, located at 1250 E Harvard Rd, Burbank, CA 91501. Honorees, Gwendolyn Osborne-Smith and Eva Marcille Pigford were chosen as stand-out examples of ‘gladiator moms’, women capable of business success in the public eye while succeeding equally well on the home front.

This year both honorees have extensive acting credentials and busy careers in the public eye, and both have young children; Ms. Osborne-Smith has five children and Ms. Marcille has a young daughter.

The term ‘gladiator mom’ has become a part of the mystique, as both honorees have shown that they stretch beyond these active ‘stats’ by racking up even more accolades and accomplishments. While busy with a regular roll on ‘The Price is Right’, Ms. Osborne-Smith added the producer’s title to her resume and managed to appear in several movies as well as other TV series. In addition, her singing career is consistently growing with an album in the works and she continues to appear as a top-tier model.

Ms. Marcille’s accomplishments seem no less daunting. Having vaulted to fame as America’s Next Top Model in 2004, Ms. Marcille sports an exhaustive list of TV, movie and modelling credits, including recent and ongoing work in TV One’s show ‘Born Again Virgin’ and BET’s ‘About the Business.’

AMC is giving the people what they want this June ...more Norman Reedus!!