AMC is giving the people what they want this June …more Norman Reedus!!

As they ride, Reedus and his companion “learn about each other and the towns we’re going through.”-Norman Reedus

While we all hold our collective breath worrying and waiting to learn the fate of  “The Walking Dead’s” Daryl Dixon, we can all take a ride across the United States with Norman Reedus in AMC’s New Original Non-Fiction series,“ Ride With Norman Reedus”, premiering on June 12, at 10PM Et/Pt. 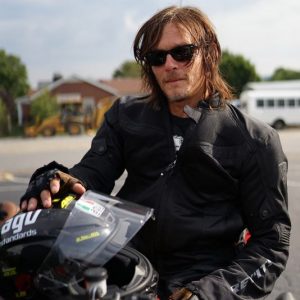 Reedus, who is a longtime motorcycle rider and enthusiast, will be taking on the open road, along with a different notable companion for each episode. Each installment will have him journeying to a new destination, exploring  local biker culture and celebrating the best and brightest collectors, mechanics and craftsmen around the country. Some of his stops will include custom bike shops, tattoo parlors, collectors’ warehouses and even a roadside smokehouse.

Some of the friends he will traveling with include “Easy Rider” Peter Fonda, Robert Rodriguez and Balthazar Getty who will be traveling to places throughout the United States, including North Carolina, Florida, California, Nevada, Texas and Louisiana.

In a quote to USA TODAY, Reedus said – “It’s not like a chop-shop show. There’s a bit of that but it’s more of a travel experience: Let’s take this journey on motorcycles and meet people along the way. It’s very fun and interesting and we had a blast making it,” he says.

Make sure to watch “Fear The Walking Dead” this Sunday, April 24th, at 9pm ET/PT to check out a brand new series teaser for “Ride With Norman Reedus” that will air during the show.

The series is produced by Left/Right Productions.

AMC is home to some of the most popular and acclaimed programs on television. AMC was the first basic cable network to ever win the Emmy(r) Award for Outstanding Drama Series with “Mad Men” in 2008, which then went on to win the coveted award four years in a row, before “Breaking Bad” won it in 2013 and 2014. The network’s series “The Walking Dead” is the highest-rated series in cable history and the number one show on television among adults 18-49 for the last four years.  AMC’s other current original drama series include “Better Call Saul,” “Hell on Wheels,” “Turn: Washington’s Spies,” “Halt and Catch Fire,” “Humans,” “Fear the Walking Dead,” “Into the Badlands” and the forthcoming “The Night Manager,” “Feed the Beast,” “Preacher,” “The Son” and “The Terror.” AMC also explores authentic worlds and discussion with original shows like “Talking Dead,” “The Making of The Mob,” “Comic Book Men” and the upcoming “Ride with Norman Reedus” and “The American West.” AMC is owned and operated by AMC Networks Inc. and its sister networks include IFC, SundanceTV, BBC America and WE tv. AMC is available across all platforms, including on-air, online, on demand and mobile.