The Digital Hollywood Fall Conference at the Ritz Hotel in Marina Del Rey this week again brought the best and brightest together for 3 ½ days of panel discussions with companies and personalities that are shaping the world for the future in the entertainment and digital media industry.  In past years the focus was on crowd-funding, 3D, social media, 2nd screen and new platforms.  This year the major topic was VR and AR.

New cameras, new technology, new apps, new software and new content were discussed in detail.  Just like the days of the Betamax and VCR, the question will be about which platforms to view this wild new medium.  The visor makers were there in force, from Oculus and Samsung on the high end to Cardboard on the low end.  Anyone with a large format smartphone like the Samsung Note 4 or IPhone 6 can attach their device to a head-mounted viewer and immerse themselves in fabulous virtual worlds.  A great question will be between tethered and untethered devices.  The possibilities are endless.

All agree that we are at the infancy of this great new medium and like many of the incredible innovations of the last 20 years that began with the military, the technology is now available to the public.  With this technology, new businesses and startups are incubating and starting all over the world.  Adding a new viewing axis to film making is creating new and interesting challenges to the modern filmmaker.  Virtual reality has existed for 20 years but mostly in the gaming world.  One example on display at the event, let the user experience the world and react to other characters from the position of a disabled person in a wheelchair.  It is a bit like the world of Doom where you could look up or down or to either side and see other characters played by real actors reacting to the situation of the mute character in the chair. 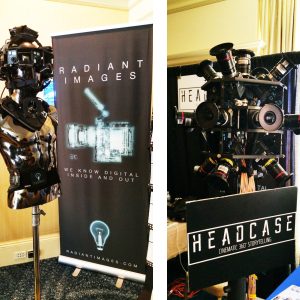 There was one interactive display for attendees that allowed a person wearing a visor to try to cross a narrow virtual bridge that is raised virtually in the visor and then you are asked to jump off a platform at the end.  Even though you are still standing on the carpet in the hall, there were actually people on their hands and knees crawling across the carpet afraid of falling to their death.  It was quite funny.  This writer took the plunge happily.

Cameras are being developed that can shoot seamlessly and create live action virtual worlds, in some cases including 17 Go Pro cameras on a unique rig.  The question is how far can technology push the range of possibilities.  Software is being developed that will render the problem of stitching obsolete.  Sound development is a major part of the coming industry and the tech companies working on this aspect were there in force.  One of the most interesting speakers was Amir Rubin, CEO of Sixense, Inc.  His platform includes hand held devices that let you interact in the virtual environment with virtual shopping or maybe having a light saber battle, just naming 2 examples.  By adding 2D windows to the virtual panorama one can incorporate close-ups into the wide shots adding a whole new way of story telling.  As always, content and story still remains foremost.  With new tools to tell a story and with the price of the goggles coming down and the promise of light-weight glasses in the future, everyone might soon have the possibility of carrying your Imax cinema in your pocket.  The promise of medical applications is endless.

VR and AR are now considered an investment in Time and Space.  This is leading to a whole new concept in advertising and entertainment.  The major studios are all developing new content, tech and apps in the field, including, Disney, major networks, Google, Amazon, Lexus, and YouTube.  The latter was a major subject of the conference and it is now the biggest source of content in the world.  More people than ever before see their content on YouTube than traditional media.  The smartphone and tablet are becoming the 1st source of content consumption.  To be in a total immersion environment is the wave of the future according to some of the top CEO’s in the world.  Marketing strategy and the race for the perfect platform are driving the medium.  Can you imagine seeing a movie from a different perspective every time with the ability to walk through a virtual real world with the ability to watch a character from any angle and look forward or behind just by turning your head.

There were many lectures about YouTube and the effect it has had not only on viewers, but especially for content creators.  Anyone with an IPhone can have their own channel and once you have 10,000 subscribers to your channel not only can it be profitable, but one can even have access to the YouTube Space complex in places like Playa Vista and free film and editing studios to use.

There were panels about funding, crowd-funding, venture capital funding, startup strategies, live theater Environments to Domes, gaming, 3D Web, and the Immersive Universe.  Hybrid Television, new content websites, toys and rides, and the amazing expansion of the mobile world were prevalent in the discussions.  Monetization is a major topic and even lectures on how to pitch an idea were available to attend.

At the end of each day everyone met at the Ritz pool for drinks and an opportunity to meet and in some cases cement partnerships for the future.  There is no way to even begin describing the amount of talent, genius and fantastic ideas that were prevalent over the week and the only difficulty was picking and choosing which panel discussion to sit in on as there were often as many as 8 happening simultaneously.  It will be interesting to see which direction the next Digital Hollywood Conference will take.