Larry and Luisa Dunn are not only extraordinary musicians, but they are so gracious and giving of their time to many humanitarian causes.  I’ve had the honor of covering them at The Diplomats Diversi-Tea Gala back in April 2015, and again, at the Southern California Health and Education’s Annual Scholarship Dinner and Dance in November, 2015.

A momentous occasion occurred since the time I wrote these two articles on the Dunn’s.  Larry Dunn was awarded the Lifetime Achievement Award from the Grammy’s in April, 2016, as an original  member of Earth, Wind & Fire.   The Grammy’s Salute to Music Legends will be aired on PBS,  October 14th.

I would like to share my article again regarding this most fabulous couple at The Diplomats Diversi-Tea Gala, in honor of Larry Dunn’s prestigious recognition by the Grammy’s. 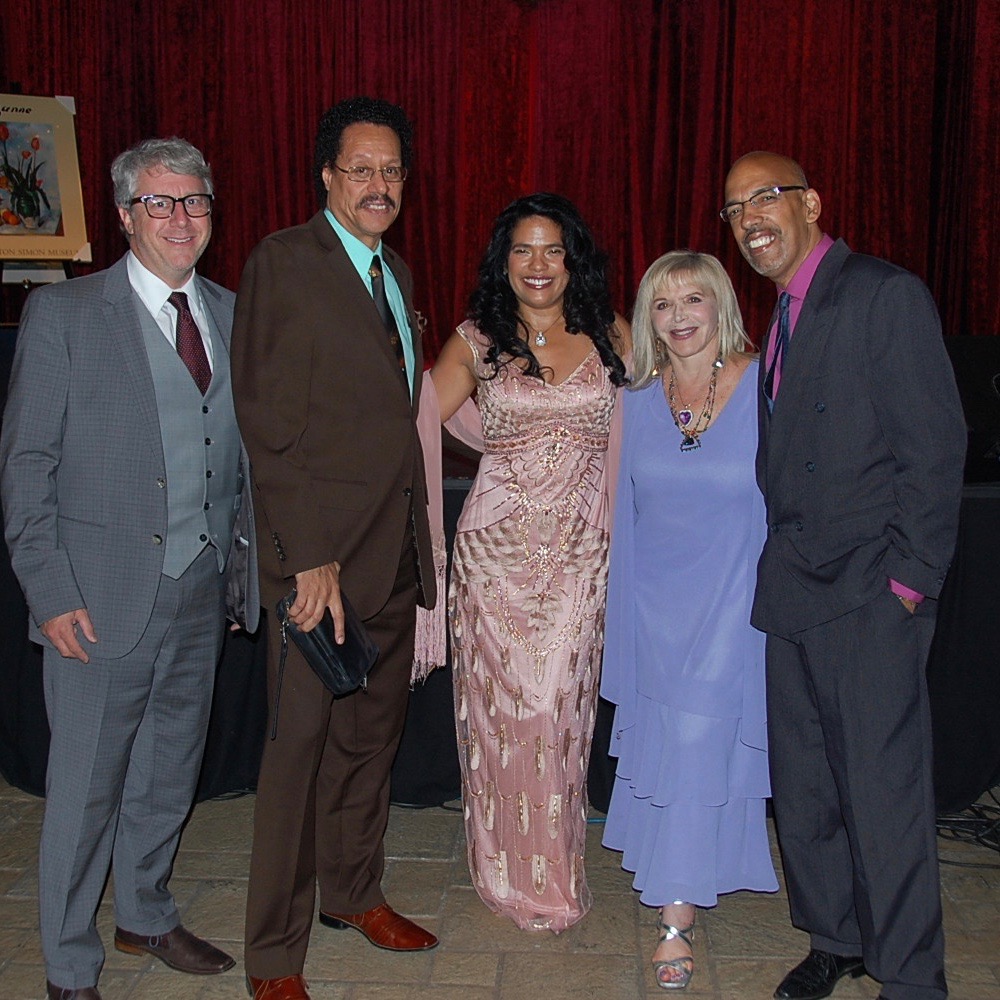 On Thursday evening, April 30th, 2015, in Hollywood, legendary musician Larry Dunn and his wife, Luisa Dunn were commemorated for their humanitarian work at the Diplomats Diversi-Tea Gala Honors along with His Excellency Ambassador Crispin Gregoire, His Excellency Ambassador Zerihun Retta, Consul General Leopoldo Ramos and Consul General Eugen Chivu.  April Sutton, founder of the Gala, holds this annual ceremony in Los Angeles providing a stage for international dignitaries to have a presence in the City of Entertainment.

“I want you all to know that seven years ago I created this event because the city of Los Angeles really needed a specific platform to highlight the Consul Generals.  We have so many events that feature celebrities and red carpet events…and I feel these dignitaries are just as significant as entertainers,” said Ms. Sutton to the audience.

Ms. Sutton is an award winning television producer and broadcast journalist in Hollywood, she is the youngest Inductee in the Broadcasters Hall of Fame for her superlative reports at the BET Network, and also April is the special delegate, Ambassador of Goodwill for the United Nations. 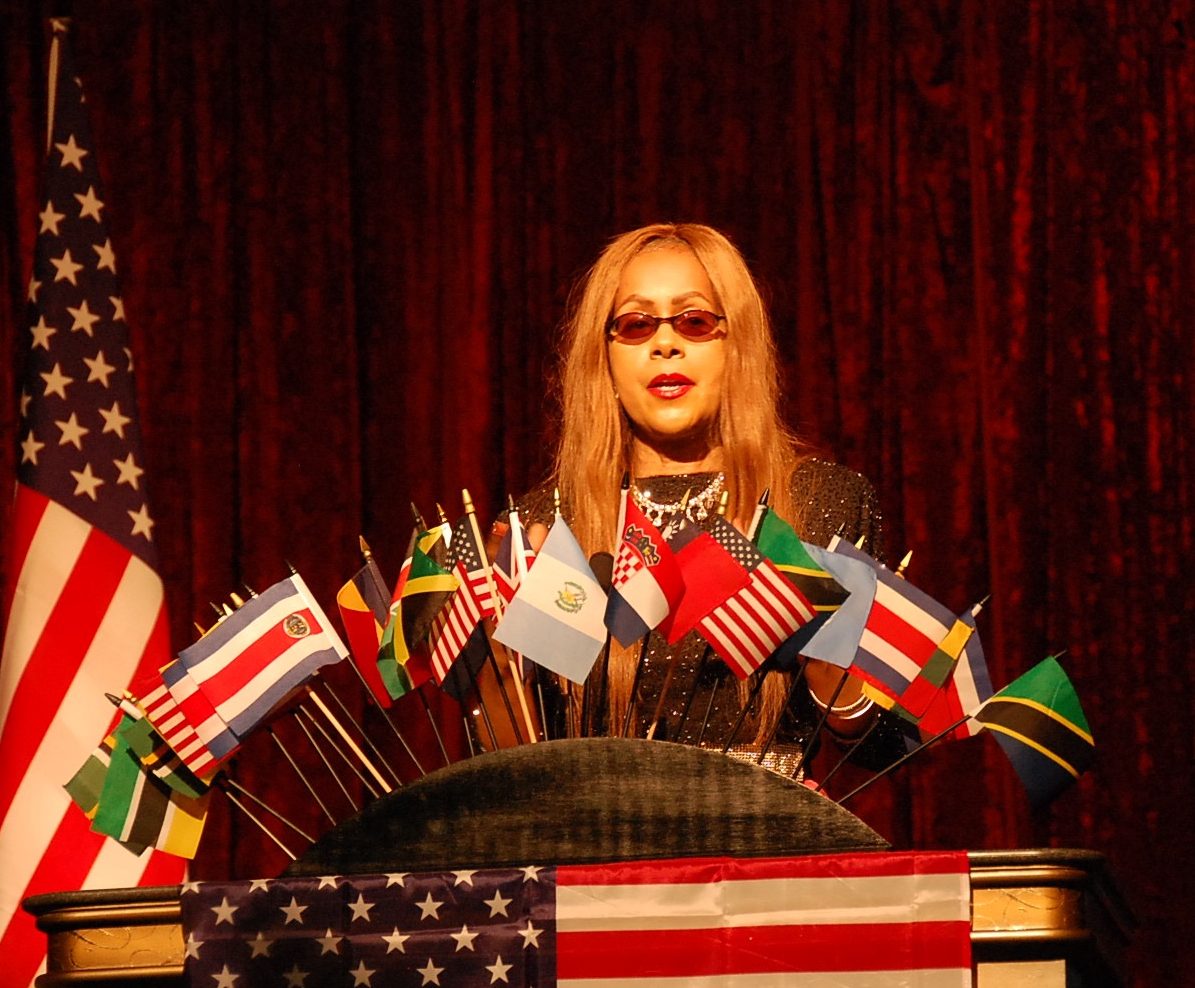 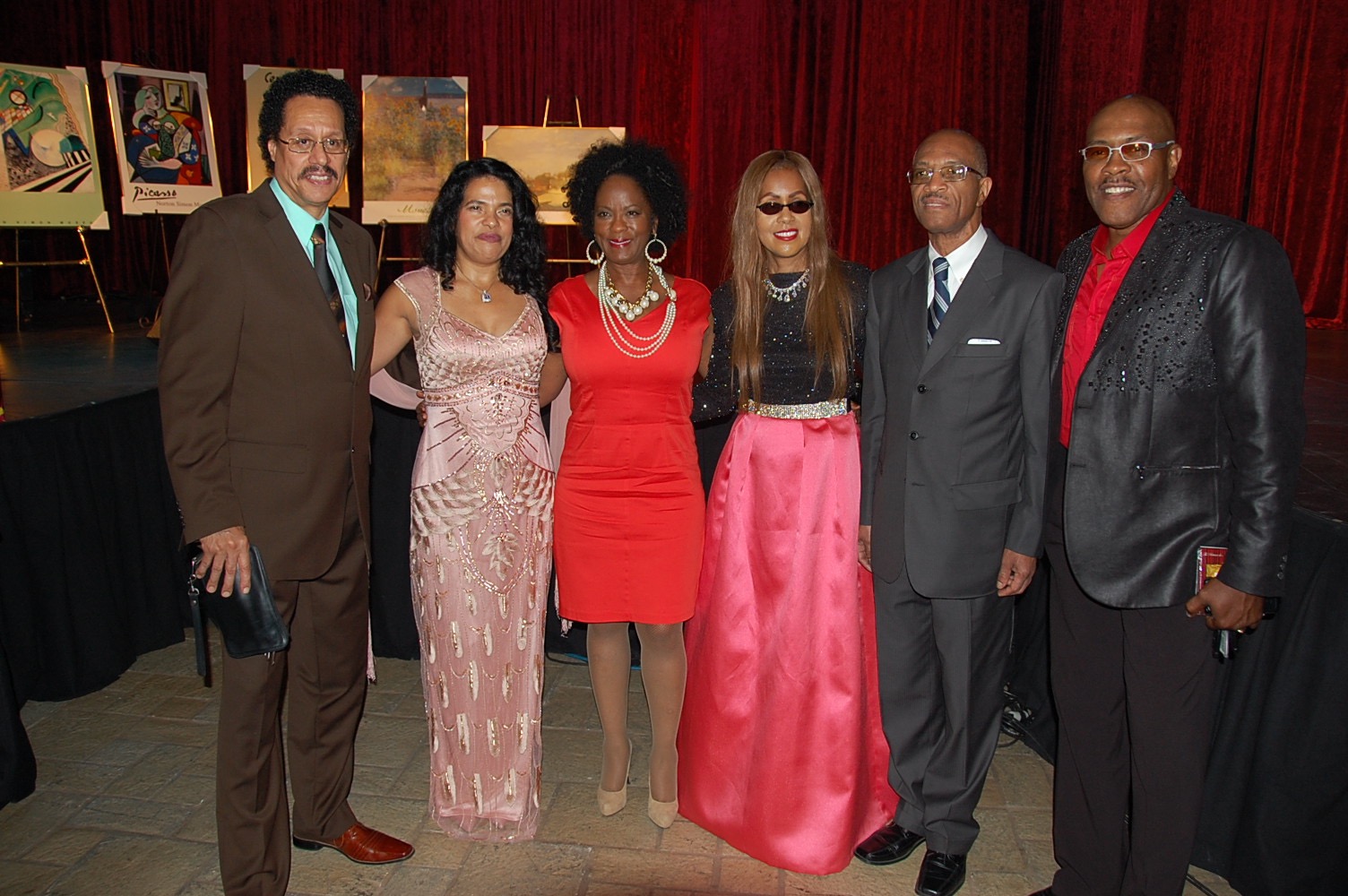 A warm and inviting atmosphere heralded the festivities as each guest had the opportunity to mingle with the dignitaries and the Dunns.  The tables hosted small international flags and  Diversi-Tea provided teas from all over the world as the beverage.  A delicious buffet dinner also was offered.

Inspiration flowed all evening long as well as well as admiration for the accomplishments   of each honoree.  Ambassador Gregoire animatedly expressed his excitement of meeting Larry and Luisa Dunn. “I have vivid memories of listening to Larry Dunn’s music in the Dominican back in the 1970’s with Earth, Wind and Fire and it is so great to be in the same room with this music legend.  I am also impressed with his partner of many years, Luisa, and how great a musician, composer and producer she is too.  They both have done so much to help their community in Los Angeles and all over the world.  They compliment each other very well.” 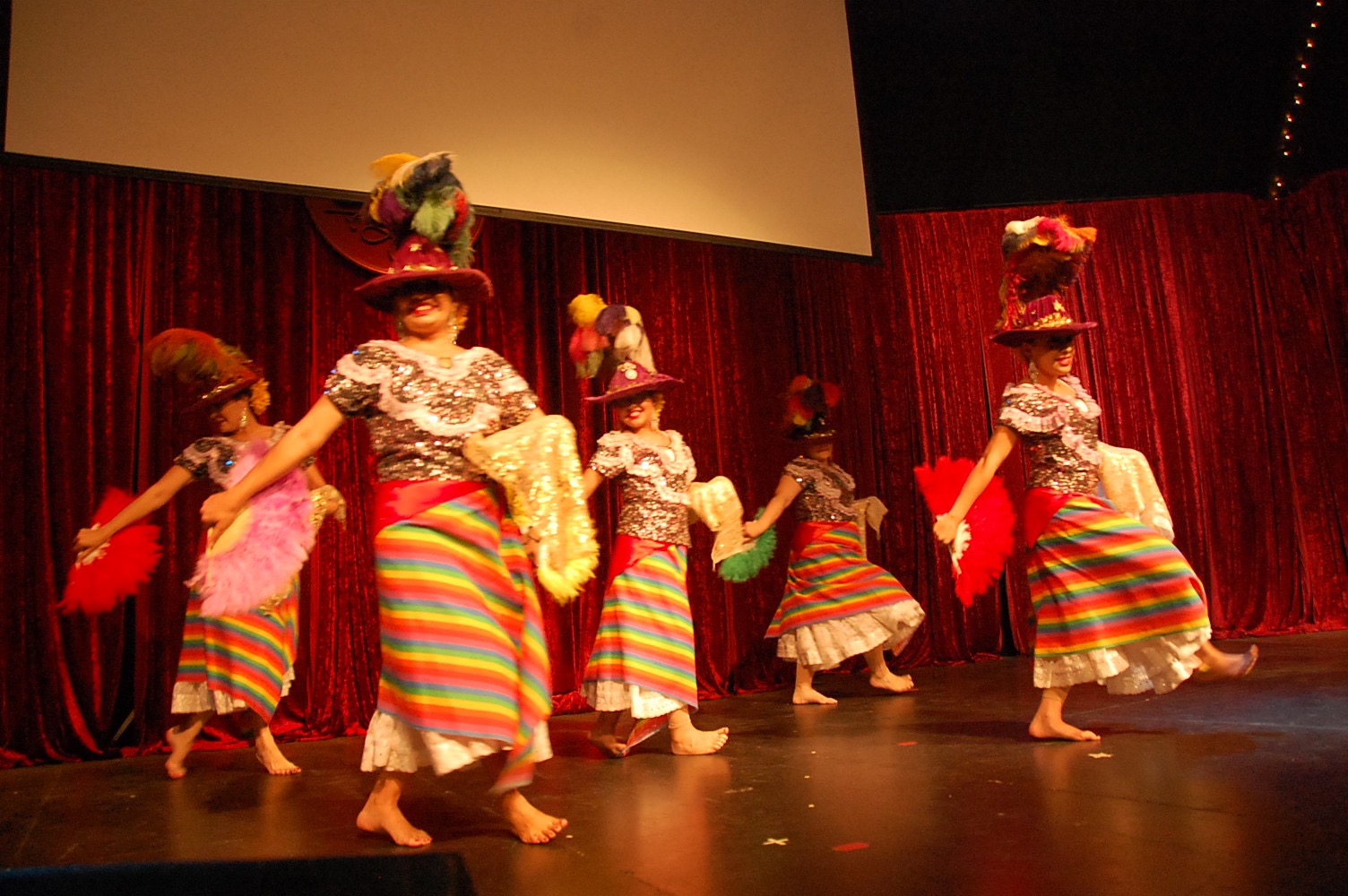 Larry, on the other hand was extremely pleased to show off his Kalimba skills to the African contingency of Consul Generals and Ambassador Retta.  “I asked Ambassador Retta if he heard my Kalimba sounds and he enthusiastically nodded and said, ‘yes…yes…excellent playing… reminds me of home.”

From the tropical white sandy beaches of Nicaragua to the ancient stone structures of Ethiopia to the thick emerald green forest and glorious mountains of Romania, the guests were treated to a short video that captured the essence of each country. Nicaragua,  Ethiopia and Romania sparkled rich with history, beauty, and diverse customs.  Dancers from the Nicaragua  graced the stage with their folk steps, after Consul General Ramos presented his talk. 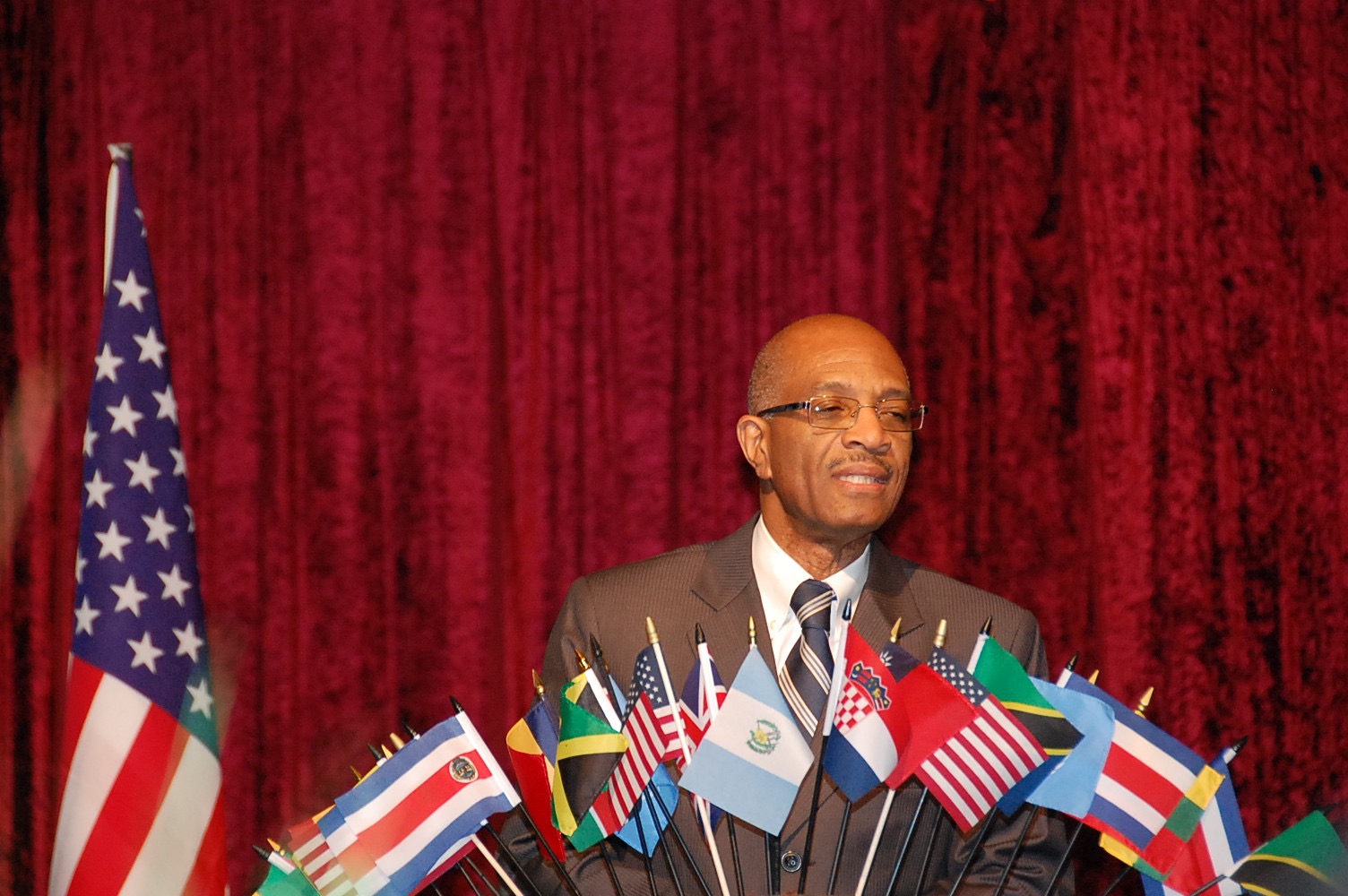 Ambassador Retta showed off his country by telling us that the first human ever, Lucy,  was found on Ethiopian soil  and Consul General Chivu told an interesting story of how a General in the Civil War was Romanian and this gentleman was responsible for the United States purchasing Alaska.

His Excellency Crispin Gregoire showed slides of the brand new memorial sculpture, The Ark of Return which is the Permanent Memorial in Honour of the Victims of Slavery and the Transatlantic Slave Trade.  His Excellency dedicated many years to making this project happen.  Rodney Leon, the designer and architect of the sculpture and also of the African Burial Ground National Monument was from Haiti which is part of Gregoire’s home country, Dominican Republic.  “We must never forget…we must recognize these slaves who didn’t survive the passage and also were taken from their native land… we must make sure this never happens again,” the Ambassador implored. 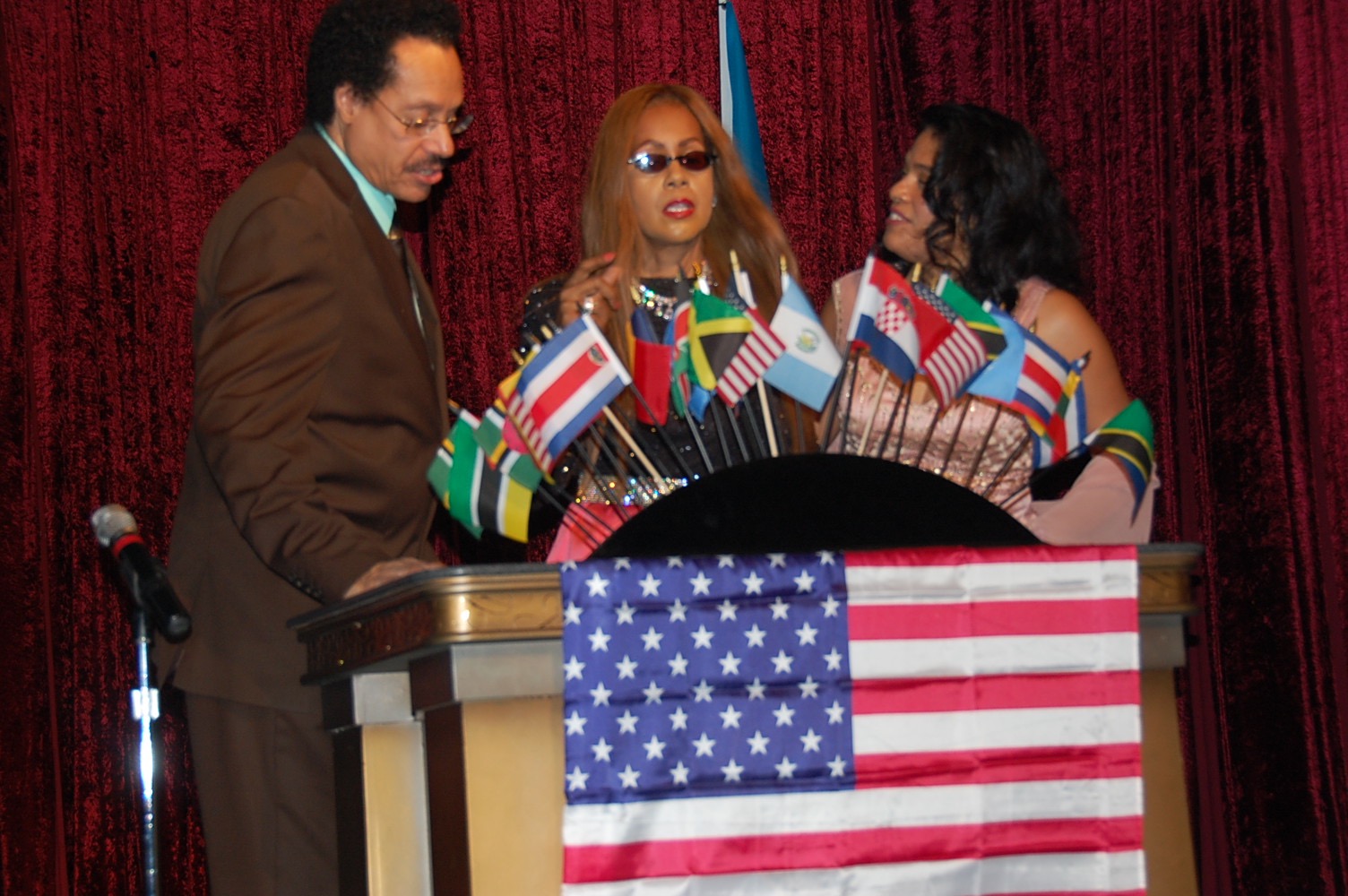 The musical inspiration of the night took front stage when April Sutton introduced Larry and Luisa Dunn.  The six Grammy award winner, Rock and Roll Hall of Fame and Songwriters Hall of Fame member, Larry Dunn, stood handsome and statuesque next to his wife of 32 years, Luisa, luminous in a pink, beaded Sue Wong gown.  “Let me repeat, his wife of 32 years,” said April to an astonished audience.  “That is a miracle in Hollywood.”  Everyone clapped. 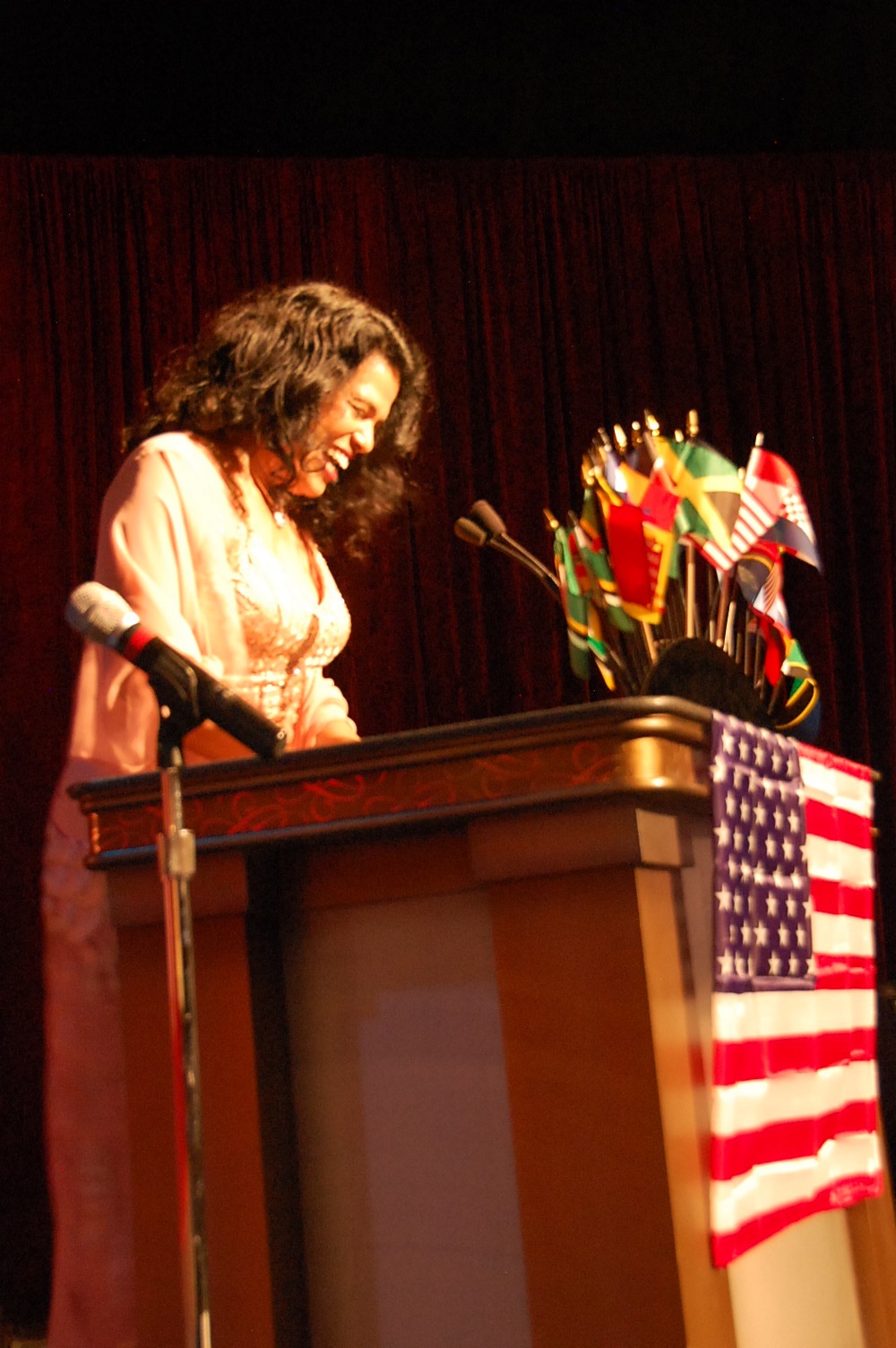 She continued, “Our calling has been to touch the multitudes and bring hearts together and to be the light.  As the song articulates, and Luisa then sang…”You’re a shining star, no matter who you are… ” she paused and looked at the audience,  “all of you out there know what I mean…she then intoned again,  ” Shining bright to see, what you can truly be.” Those words say it all.  Can I get Amen.”?

Then looking lovingly back at her husband, she crooned, “Speaking of a shining star, I want to introduce you to my loving husband of 32 years… Mr. Larry Dunn.  Darling time for you to speak now…” 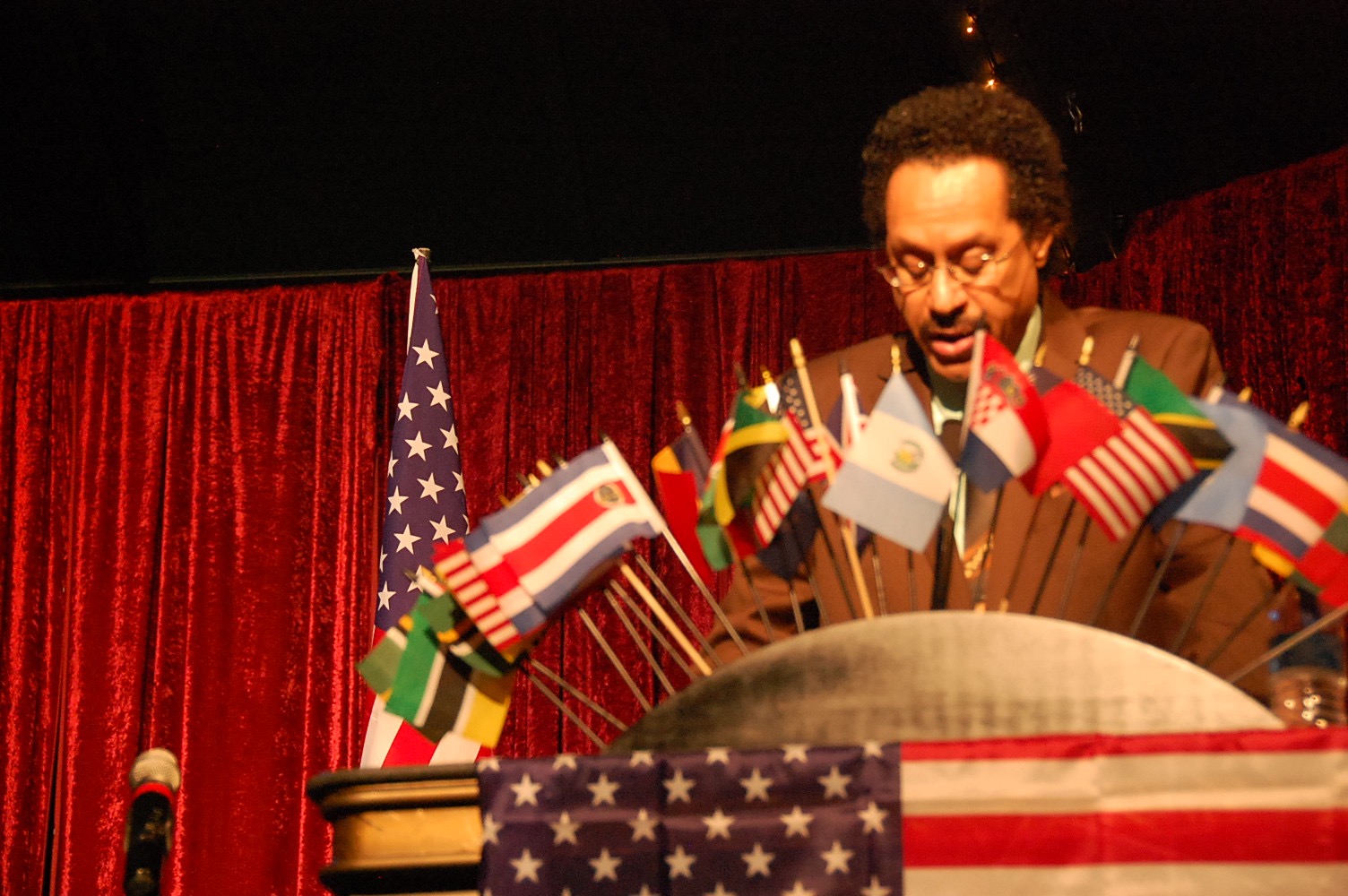 Mr. Dunn turned serious and spoke eloquently about living with integrity and how important it is for children to receive music education in the school system.  As he is poetic with the words he writes to songs and melodic with the music he composes, his speech followed suite, “I was blessed with the gift of creating music and because of this blessing, I honor and respect all the responsibilities it entails to deliver a spectacular product to the public.  Music puts smiles on people’s faces.  Music lights up hearts and souls, music rouses people to dance, music provides a buffer when they are suffering from heartaches, that special song gives couples a romantic boost that marks their relationship forever.”  When talking about what playing an instrument does for kids, he said, “Kids learn how to take responsibility, they are taught discipline through practicing… Most of all being in the band puts smiles on their faces and pride in their hearts.” 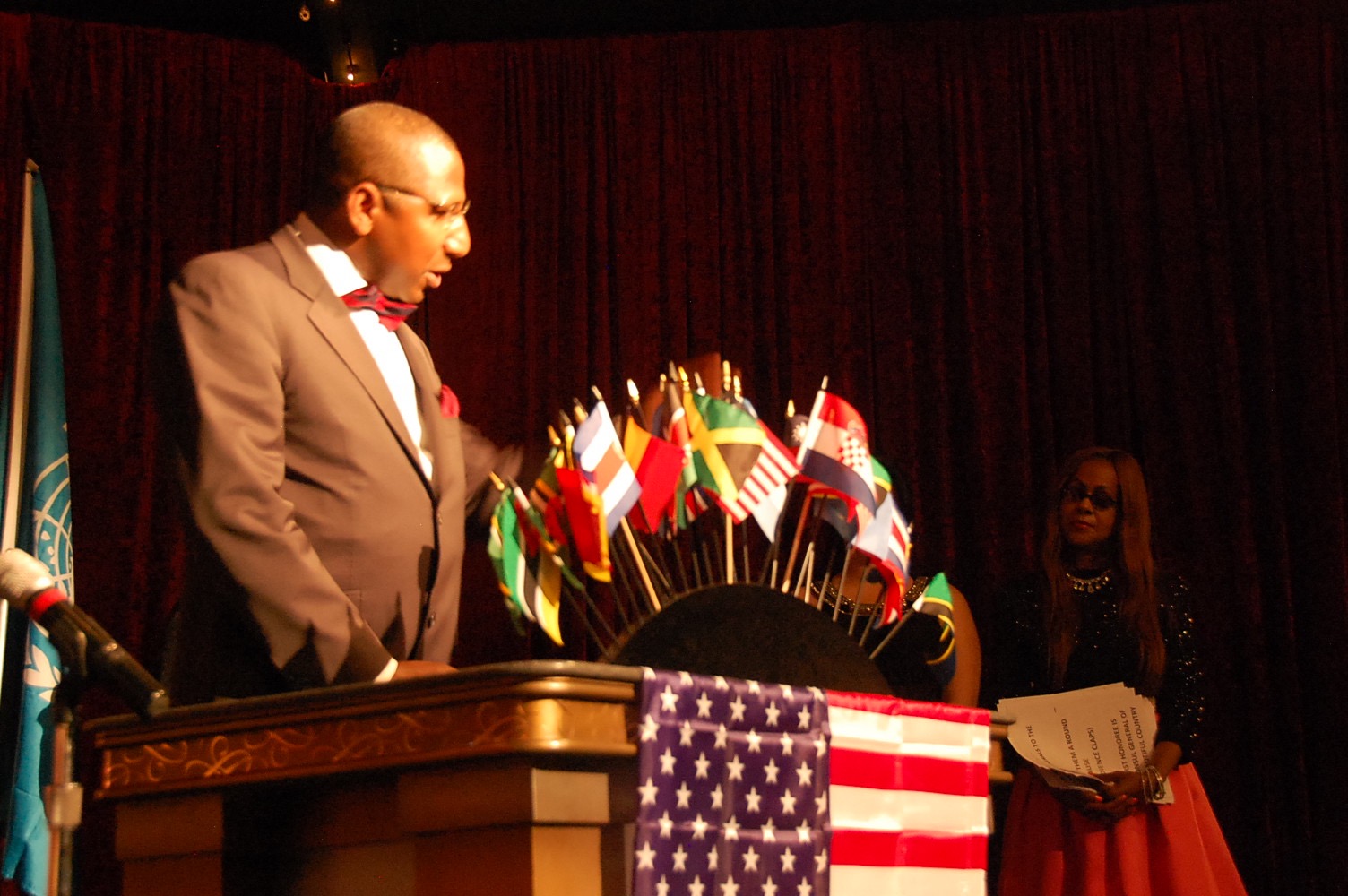 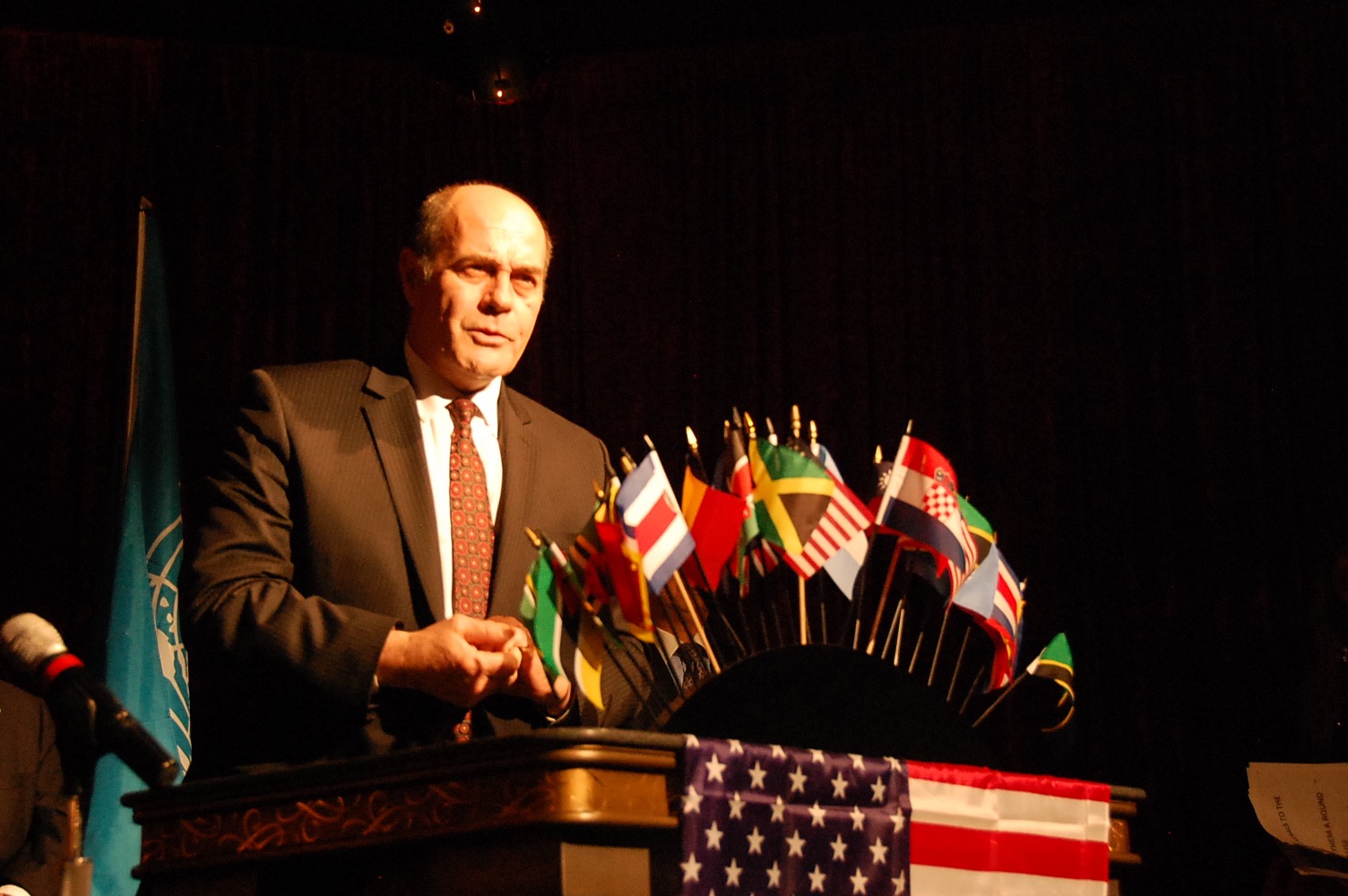 He then put music in all of our hearts as Larry walked to the piano and played the song “Spirit”.  The room filled with an ocean of melody that made one shut their eyes and marvel at the gorgeous composition floating out of his hands.  As with everything Larry Dunn plays, he transforms the atmosphere into another dimension.

Ending the stimulating night, April Sutton presented all the guests of honor with an exquisite framed print of different master artists like Picasso, Cezanne, Kandinsky, which came from the Norton Simon Museum. 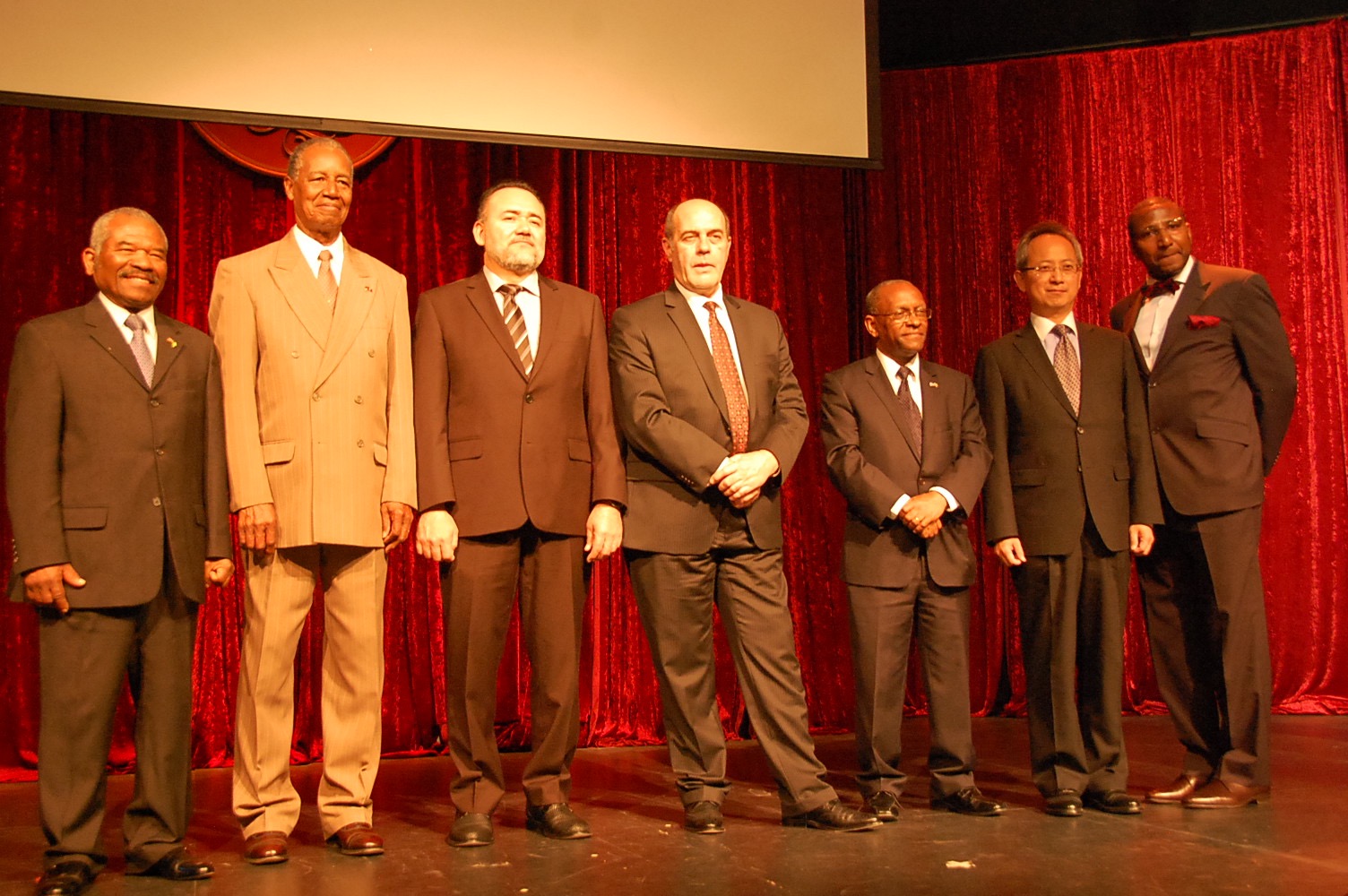 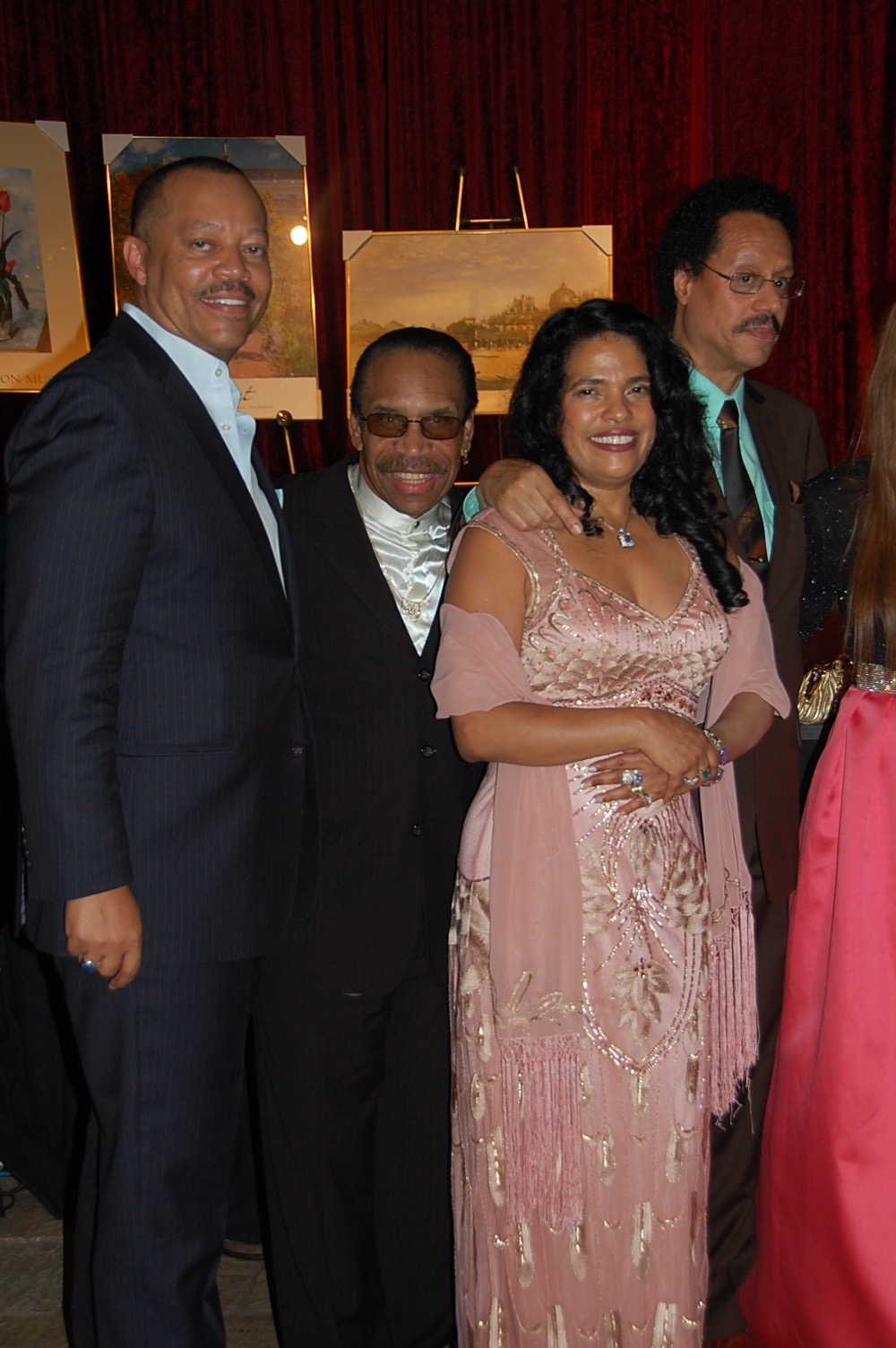 Ms. Sutton had encouraged all of us at the beginning of the evening to come together as brothers and sisters…as members of the human race, no matter our differences.  The Diplomats Diversi-Tea Gala Honors fulfilled its mission.

“It was a spectacular evening.  It brought all of us together being unified and put everybody in a position to act as a community for global diversity,” Luisa concluded. 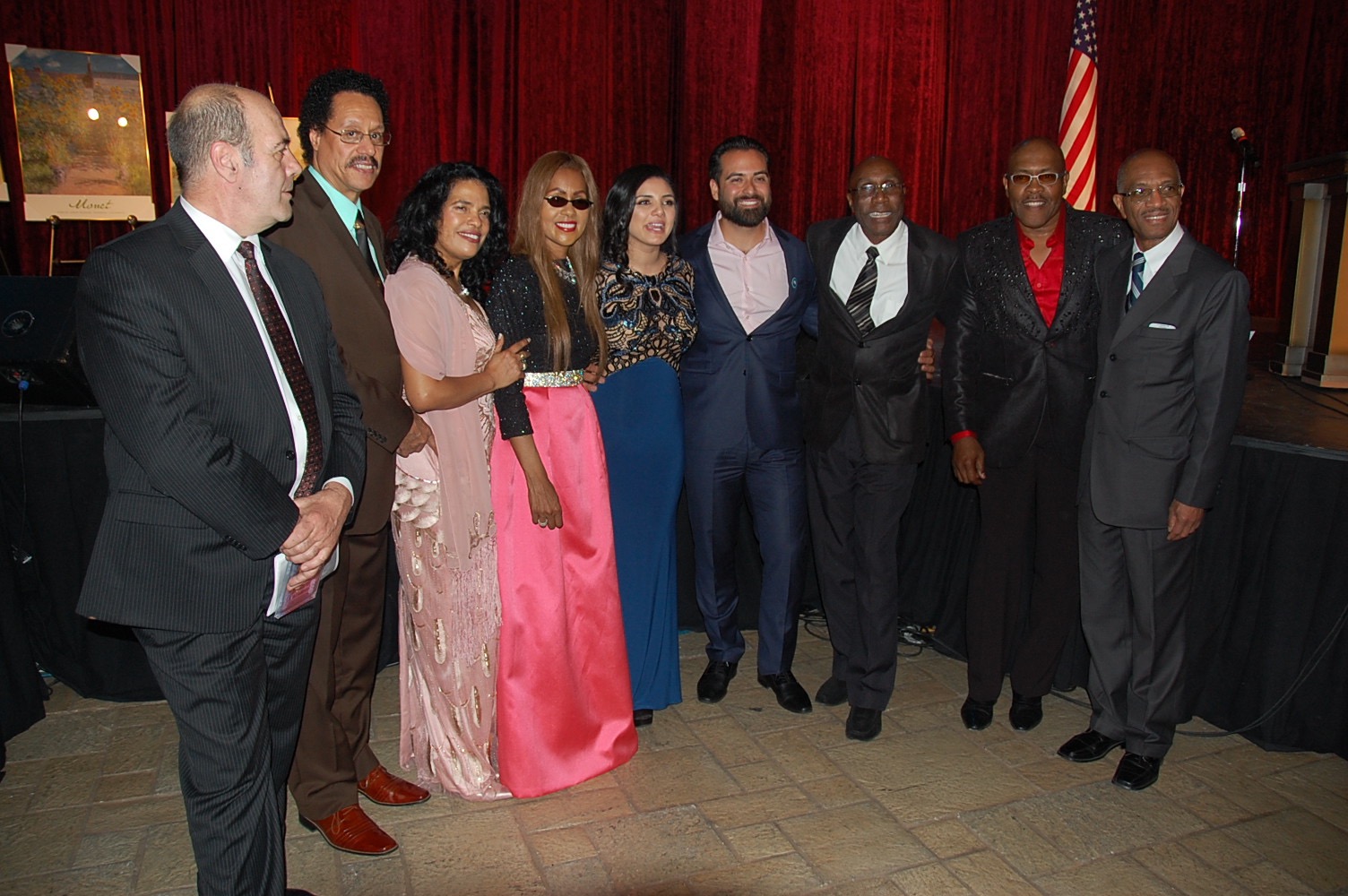 An Exclusive Soul Records “After the Show” with Carl “Pep” Brown