An Exclusive Soul Records “After the Show” with Carl “Pep” Brown

“The music business is just part of my DNA,” Carl “Pep” Brown, President of Mighty Works Media commented in an over the phone interview.  Here are some reasons why.  He was able to call Grammy winning vocalist, Billy Paul…”Uncle Billy,” when as a young man, Pep asked the veteran soul singer advice about the music business.  Pep knew Billy Paul because Leon Huff, co-founder of Philadelphia International Records along with Kenneth Gamble were both referred to as Uncles, particularly Leon Huff because of his family ties.    Ideas for some of the most famous songs such as “Backstabbers” were discussed in the kitchen of the family home, where he also observed Leon Huff composing music on the piano in the living room.

Carl “Pep” Brown recently sat down with Robert E. Johnson, CEO of Soul Records and host of “After the Show” to discuss Pep’s musical career and illustrious history.  I first saw Pep on Facebook delivering one of his daily “Pep” talks which are approximately one minute encouragements based on his philosophy of positivity and giving back.  As he was mentored by one of the music industry’s iconic figures, Leon Huff, Carl “Pep” Brown decided to do the same for upcoming artists.

Let’s start out by discussing why were you nicknamed Pep.

Carl “Pep” Brown:  The middle name came from my grandmother and my family because I used to be very peppy and ran around and had a lot of energy.  I was very fast.  I was an athlete growing up.  I was one of the fastest kids in my school.  I ran track and field.  I was speedy and fast and I’m still the same way.  Then I try to give that energy to other people and pep them up and share that energy.  We need energy to be successful in life.

You’ve incorporated your nickname into these inspirational and fun encouragements on Facebook called “Pep Talks.”  How did these originate?

Carl “Pep” Brown: I started Pep Talks” while I was living in Canada.  I went to Canada after I left the record company (Philadelphia International Records) and was supposed to go back, but then the office burned down all my equipment.  One day I just decided to do an encouraging video.  Denny Brown, from Chase Street said, ‘You know Pep, you should call it Pep Talks.’  This started five years ago.  Then I decided to start speaking my mind of what my life is like and how people could think as well.  The way I thought was because I studied people like John Maxwell.  I learned about leadership and encouraging people.  I would take the importation from the books and tried to use it to encourage others to think positively.  John Maxwell said, ‘A positive attitude is everything.  A positive attitude is how people attract success.’  I took that philosophy as the basis of “Pep Talks” and started to encourage people to do the same.

You make your encouragements on “Pep Talks” short.  Talk about why.

Carl “Pep” Brown:  They’re short and sweet because people’s attention spans, especially nowadays, are not too long.  I make them about one minute.  So people can get a quick message and carry it for the rest of the day.

Do you have any examples about any young musicians that have heard your “Pep Talks” and used it to succeed?

Carl “Pep” Brown: What I have tried to do is encourage the young musicians to write songs, write music and give back to others. I want them to know that they’re giving their hearts and their souls, their giving their lives to this music business, to the creative side of things.   I want them to know they have to give so they can live.  Money is good and fine, but when you are giving your life, your heart and soul and inspiration, it feels so good when you feel the return of it.  Making someone else successful as well is so important to me.  Everyone wants to fulfill their dreams.   When you can encourage others to do that, that’s what we are here to do on this earth.  “Pep Talks” are to encourage others that they can succeed in life and make their dreams come true. 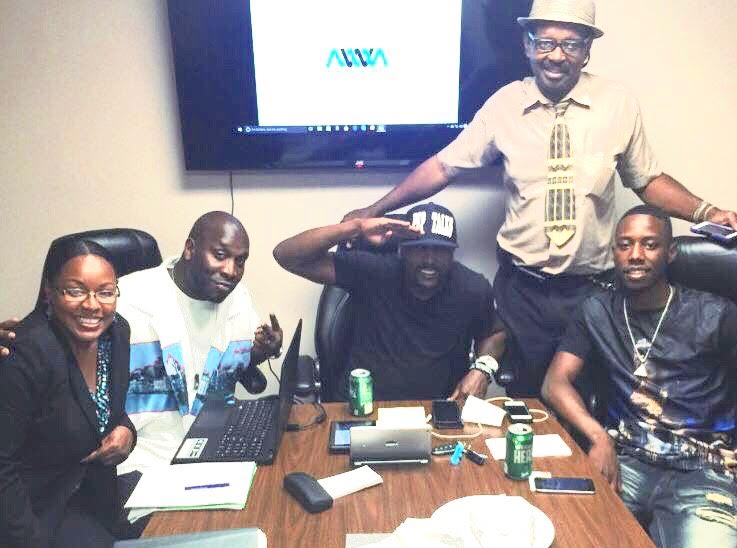 Talk about your career in the music business.  How did it begin?

Carl “Pep” Brown:  My career experience began when I went to Leon Huff ‘s house as a young boy and observed him recording music in his living room. Teddy Pendergrass and Billy Paul were some of the artists that I grew up knowing.  I watched Huff write these songs and then he would take them to the studio to record.  I watched everyone do music.  Of course I fell in love with the music business because after Huff would finish doing his records, we would all sit around as a family to listen and dance to the music.

My grandmother helped influence a couple of songs like “Back Stabbers.”  We were sitting around the kitchen talking about things people did and grandma said, ‘Them backstabbers, they smile in your face, all the time they want to take your place…” Huff wrote that down and the next thing you know, that song becomes a smash hit.

I saw all this happen and what music could do for families.  I saw people encouraging others so they could become successful.  I saw that this business was real.  It takes spirit knowing and believing in oneself.   I saw that right up front with my Uncle, my mother, and how much joy music gives to people.  Even though I loved sports and played sports, I had this draw toward music.

Carl “Pep” Brown: I would sneak and play on my Leon Huff’s piano.  I taught myself how to play.  I got a keyboard in high school then played on that.  I started writing songs too.  Every summer I had a chance to work around the studio of Gamble & Huff and meet all the artists… people like Billy Paul, Teddy Pendergrass, the O’Jays, Michael Jackson, etc. That was encouraging and astonishing, but then it became normal.  My background made me realize that people are just people, they just wanted to express themselves as artists and became successful at it.  The music business is just part of my DNA.  The story is so long and I’ve done so much in it.  I can’t say it all.

Tell me one story that stands out in your mind.

Carl “Pep” Brown:  Billy Paul.  I called him Uncle Billy because when he came over to the record company, he would sit me down and look me in my face and explain to me what the music business was all about.  He had been going through some publishing issues so he gave me some advice.  He said, ‘I want you to always take care of the business first.  Never forget the music industry is a business first.  A lot of people come into the industry and want to showcase their creativity and are so hungry to be there.  Make sure you have your paperwork taken care of first before you sit down and do anything with anyone.  Business first.’

Now that we have created this company, Mighty Works Media, I make sure the business is taken care of first before I make any kind of movement. I always remember what Uncle Billy said, “Always take care of business.”  So now I dedicate myself to the business side of the industry. I do music, believe me, but I had to sacrifice and give that up so I could help the next generation of artists to take care of their business first.

Carl “Pep” Brown:  In Mighty Works Media we help and consult with artists.  We have actors and try to place them in acting roles… we try and help anyone who is trying to get into the entertainment business and protect them.  We protect them from getting taken advantage of.   We’re a business management company and consulting company as well and help them grow.  We’re an independent A&R Company.  We wear many hats. We help the artists organize their careers, we hold their hands to develop through the business.  A lot of guys make good music but they don’t know what to do when the music is done.  They need someone with more experience to get to the next level.

Have you had a musical career?

Carl “Pep” Brown:  Yes I have.  I used to be part of a group called Demboyz ( members included Tony D, Jay Reezy and Victor Nu) from Philly and we did a record for the Philadelphia Eagles. For the Super Bowl we did the song, “The Boys from Philly.”  I was the Executive Producer on that record and we got signed with Philadelphia International. We were on the front page of the Daily News.  We did tram sport songs for the Eagles and Phillies and the 76ers.

However, I figured out that Artist Development is my forte.  I built my first studio in Philadelphia International Records where I began producing music.

The spirit of music…meaning the actual lyrics leaving a message, is not there.  It’s all about a synthetic sound where everybody listens to the music more than the lyrics.  When I watched all these great writers from Philly International do their thing, they would go from the church with their spirits filled up and then go write the song.  Nowadays it’s like a synthetic sexual thing.  That’s what it’s all about sex, sex, sex.  They don’t want to talk about relationships anymore or how people should feel in love and how love is structured.

It’s the music, it’s the beat, it’s the excitement of the dancing.  Everything was orchestrated back then down to the last note.  It’s easy now in the studio, you can drag and drop with a mouse.  You don’t appreciate the artistry back then when it was all analogue.  There’s no humanization now where you can feel the heart of the beat, the heart of a lyric, where you can feel the soul.

What are your goals for Mighty Works Media?

Combining the musical programming with the humanization with those lyrics of love that you can really feel from the heart.  I tell my artists that when they write music and lyrics, they can’t always go for negativity…you have to show positivity too.  They don’t have to sell their souls to do it.  They can learn how to be a little more patient by educating themselves.  Study, plan, do, review.  That’s how I go about accomplishing goals.  That’s my process and I am still going through that process every day.