The Hollywood 360 covered the red carpet at SHE ROCKS AWARDS on Friday, January 20th, 2017 at the NAMM Show.  Some of the 2017 Honorees were Lita Ford, Ronnie Spector, Shirley Manson, and Esperanza Spalding. 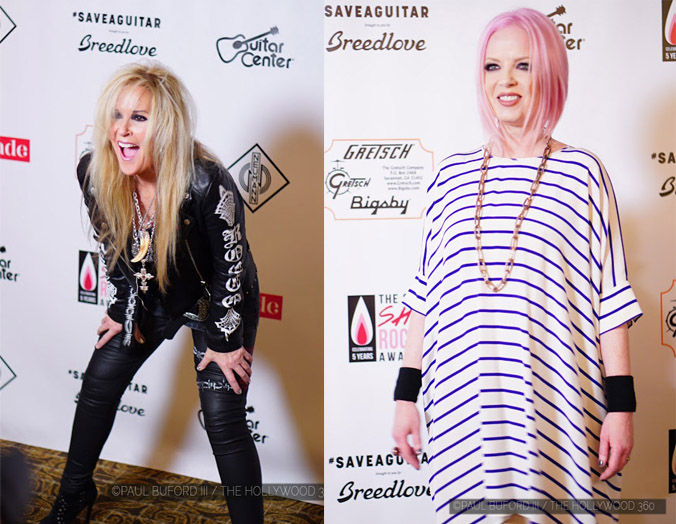 We first interviewed Tish Ciravolo, Founder of Daisy Guitars and co-host of She Rocks.

The Hollywood 360: Talk about your guitar line and what your company is up to.

Tish Ciravolo:  I have a new distributor this year KCM Music.com.  I’m in this huge house of brands which totally elevated the guitar company.  We have come out with all the plastic models.  It’s very exciting.  It’s like a new beginning for me.

The Hollywood 360:  Talk about tonight and why it is so exciting.

The Hollywood 360:  It’s so important that female musicians get recognition.

Tish Ciravolo:  I want to tell all the women out there to stay with it.  If you haven’t won an award, you’re going to!

Jennifer Batten, who has been the guitarist for Michael Jackson and Jeff Beck, was next up.

The Hollywood360: Tell us your feelings about SHE ROCKS, what does it mean to you?

Jennifer Batten:  It gets bigger and bigger every year.  The word is out. There are so many women hitting the scene now that are really, really good.  They’re top notch, innovators, and it encourages the younger kids coming up.

The Hollywood 360:  Since you are one of the pioneers, talk about how you’ve seen the music scene change for women over the years.

Jennifer Batten: I started playing when I was 8 years old.  I took lessons until I went to Musicians Institute in 1978.  That year I realized it was an odd observation because it was 59 guys and me.  I have dealt with a lot of prejudice, but I don’t even want to focus on that.

The Hollywood 360: I understand, but you had to overcome that prejudice and that made you durable, strong.

Jennifer Batten:  There’s an energy in music that draws you in, no matter what level you are doing it at, whether it’s a hobby or a profession.  There’s no reason that I could find, not to do music.

The Hollywood 360:  Share one memory from your successful career that sticks out in your mind.

Jennifer Batten:  The first memory that comes to mind is when Jeff Beck called me up.  He had been a hero of mine since I was 14.  When I was on the “Dangerous Tour” I had met him and gave him a copy of my CD and thought that was it.  A few months later I got a call from him to join his band.

The Hollywood 360:  Please offer some advice to all musicians out there.

This is really really fun to have women celebrated instead of being looked down upon and not being called for the gigs.

The Hollywood 360:  What are you up to now musically?

Jennifer Batten: I’m gearing up for a lot of gigs next year.  In the next few months I will be in Europe.  I do a multi-media show with films that I make.

The Producer of SHE ROCKS was Laura B. Whitmore who is is a music marketer, singer/songwriter, event producer, founder of the Women’s International Music Network and SHE ROCKS.

The Hollywood 360: Let’s talk about women, rock and roll.

Laura Whitmore: I feel that women need to know who we are in the industry and ban together. We need to shine the spotlight on women who are doing amazing things to inspire each other, support each other.  Now we are bringing women together and shining the spotlight on them.  Letting people know there are women out there in the music industry kicking butt.

The Hollywood 360: I’ve been writing about women since the 1970’s and even back then I knew the importance of women being talked about and spotlighted in the industry.

Laura Whitmore: We want to see more women doing everything…Grammy awards, SHE ROCKS awards, Women in Music Awards.  I think it’s all good.  There’s room for all of that.

The Hollywood360: Women in this music business have to put in a little bit extra.  Talk about that.

Laura Whitmore: It is real tough.  You walk into the room with a strike against you.  I still hear from a lot of women that they have to be really assertive.

The Hollywood 360:  The women artists I have interviewed, they want to be recognized as an Artist, not just a female artist.

Laura Whitmore: It’s a challenge.  I agree with you in a perfect world, it would be nice if we were judged on our merits and not as females, but the world isn’t perfect. Having events like this really inspire a lot of people.

Our last interview was with Esperanza Spalding, Grammy award winning jazz bassist, vocalist, and composer.  I had met Esperanza in 2014 when she was playing at the Baltic Sea Jazz Festival with Terri Lyne Carrington, Herbie Hancock, and Wayne Shorter in Gdansk, Poland.

The Hollywood 360: Please talk about honoring women in the music industry. I really appreciate what you and Terri Lyne Carrington have done for female musicians in the jazz world.

Esperanza Spalding:  The music industry has been male populated …there tends to be more males in the professional world.  I see more and more women choosing the path of developing their careers, and not at the expense of raising families. I really see Terri Lyne Carrington do this effortlessly, well not effortlessly…it isn’t a battle.  She does it, she has her kid, she does her life…I look at myself, and there doesn’t seem to be an alternative.

Esperanza Spalding: I’m working on a project called Walls.  It’s about how we can use sound, use performance to break down the walls that keep us disconnected to each other and ourselves.  I am working on the libretto for an opera that Wayne Shorter is writing.  We’re aiming to premiere it in 2019.  He asked me to write the libretto and it’s about one of the Greek myths.  He wanted to tell this story…it’s uncanny of how relevant the symbolism is to modern day time with the outdated, aggressive, patriarchal mind set being challenged by our eternal knowing of what is helpful and good to create peace and unity through humanitarian action as a means to conflict resolution.  He’s my mentor.

The Hollywood 360:  Talk about your bass playing.  It’s a very physical instrument.

Esperanza Spalding:  Tennis is very physical.  Playing basketball is physical.  Gymnastics is physical.  I don’t understand the mystique or eyebrow raising about a woman doing something physical in music.  There’s a mystique and the question comes up a lot.  How do you do this? Why do you do this? Everything is hard work.  In everything you do embrace the hard work of it and you will reap the benefits the more you put into it.  My thing happens to be bass.

More Pics from the Red Carpet