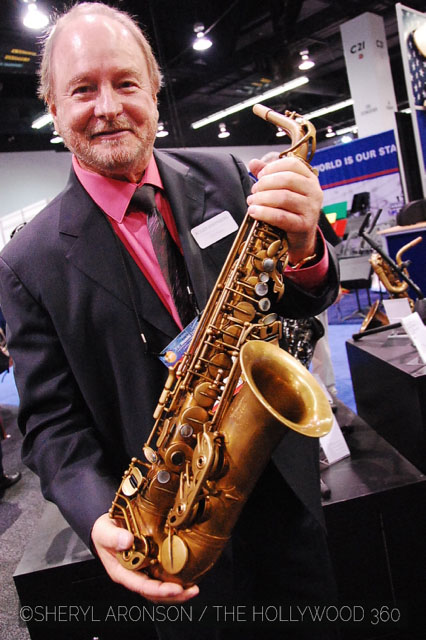 The Hollywood 360: Please talk about the history of Eastman Instruments.

Joe Cupica:  Eastman was founded as an orchestral strings company.  Our founder 25 years ago, (we are celebrating 25 years) saw an avenue in the market for high quality instruments at a decent price to maintain orchestral programs of cultural relevance across the board in educational programs.   What we ended up developing into was everything you now see here in our booth at NAMM.  You see guitars, tubas, French horns, flutes, clarinets, trumpets and trombones and of course our saxophones which are some of our biggest items.  Starting 25 years ago, we are still bringing the same mentality to today’s market.

The Hollywood 360:  Where did the company originate?

Joe Cupica:  The company got started in Maryland.  The founder, Qian Ni, was an accomplished flute player from Beijing and he trained some of his friends and family growing up to make the instruments.  That’s where the hand craftsmanship got started as a very traditional master craft work in our workshop in China.  Logistically, it is easier for us to work out of Southern California shipping wise.  It’s a natural fit for us music wise too rather than being in Maryland, which has a great music scene, but Southern California is a really good fit connecting with artists staying on top of industry trends.  We have our offices now in Pomona, but use the factory in China to manufacture. 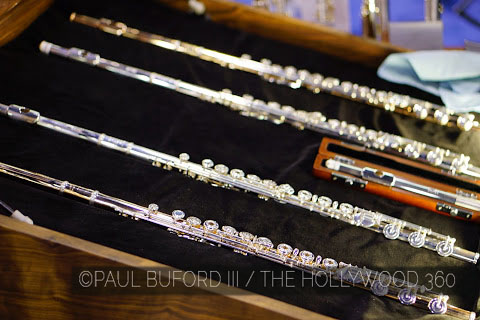 The Hollywood 360: Who are some the musicians that endorse Eastman?

Joe Cupica: We have people across every genre, starting with the jazz world… Edward Livingston and Chuck Israels are some of our artists.  We have some incredible clinicians and professors too.  A lot of our brass artists are the same We work with S.E. Shires Co. Brass which is part of the Eastman family.  People like Doc Severinsen and Mike Davis are endorsed artists.  Wm. S. Haynes, Co.  flutes are part of the Eastman family with Sir James Galway, Lady Judy Galway are endorsed artists of ours.  In our guitar department we have artists across the board from small local clinicians to big national people, such as Robby Robertson from the Band.  We have people who are big in the blue grass world.  We work with Trent Hensley an up and coming country star.  Our biggest roster is our saxophones.  We had performances from Bob Minzter and Dan Kuz yesterday.

The Hollywood 360:  Talk about Eastman Saxophones and what contributes to their quality.

Roger Greenberg: We started the saxophone line relatively recently in the history of Eastman, about seven years ago.  It’s developed so quickly into a line of saxes that have drawn the attention of some of the best professional players in the business.  We just heard the legendary Bob Mintzer play and we also have the legendary Bennie Maupin who we know has played with so many of the jazz greats.  The Eastman company is never satisfied with the status quo.  We are always looking to improve on what we have.  All the instruments have evolved over the years and will continue to evolve. 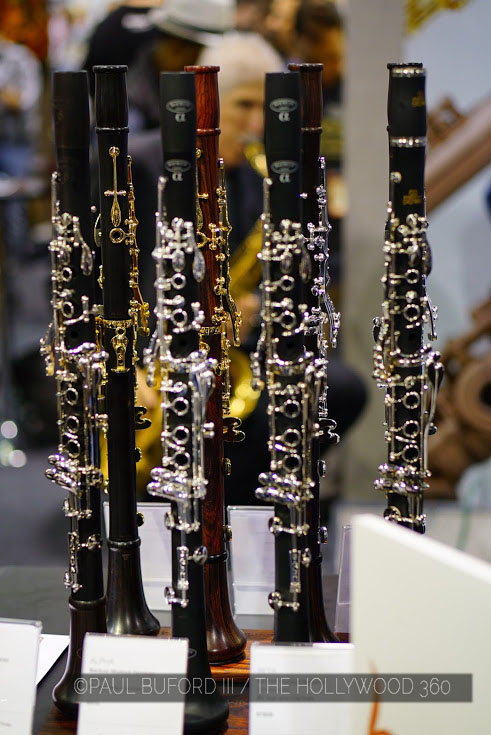 The Hollywood 360:  How have the instruments evolved?

Roger Greenberg: I took the saxophone prototypes that we had and gave them to six different university professors who play in different styles.  I collected comments from all six of them.  We don’t want to make a sax for one person which might appeal only to that person.  From the comments, we put them in lists and then decided what would be important to change and what was not important.  That’s how we got the line started.  We still do that.  We ask for feedback from a lot of different players and we listen.

The Hollywood 360:  Is there a certain sound coming from the Eastman sax.

Roger Greenberg:  I’m a sound oriented person myself.  I studied at Julliard and my teacher was a sound oriented player so that was  embedded in me from an early age.  What I look for is response, quality of sound, intonation and ergonomics.  All four are very important. 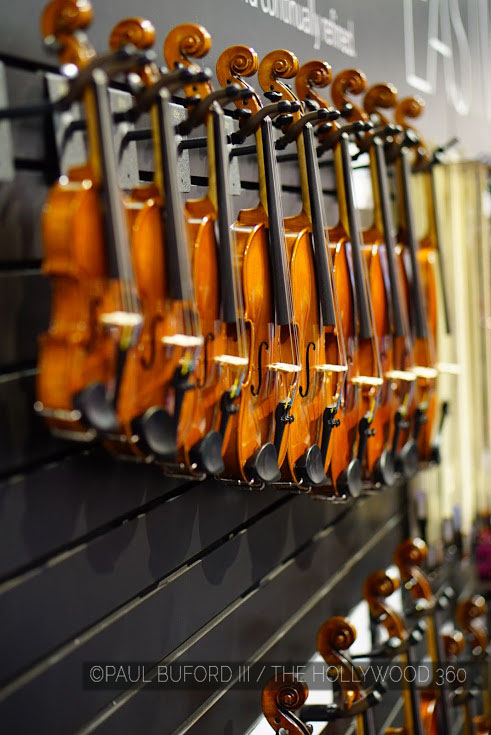 The Hollywood 360:  What is the line of saxes that Bob Mintzer was playing?

Roger Greenberg:  It was called the 52nd St.  52nd St is the street in NYC where everything was happening with jazz.  All the innovations were coming out of there.

The Hollywood 360: What would you like everyone to know about Eastman Instruments?

Joe Cupica: What Roger did to develop our whole line of saxophones, we use that same template across the board now.  How we are moving forward with tuba artists, working with trumpet and trombone and classic solo artists.  These classical artists love our French Horns and our flugelhorns.  We are so well received.  We want them to know that we appreciate the feedback, so we can create the best instruments for everyone. 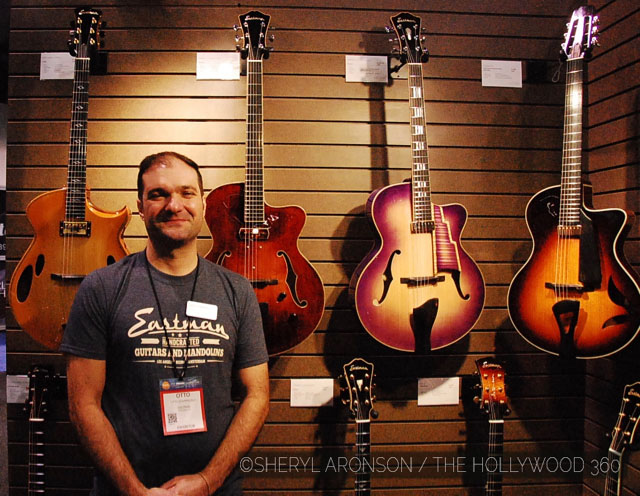 The whole line are acoustic guitars.

The Hollywood 360:  Please tell us how you crafted these gorgeous guitars.

Otto D’Ambrosio: This is the ER-4 which was designed probably four years ago.  It has a 16-inch body with a spruce top and mahogany backside and neck.  We have two oval holes and huge amount of air which gives it an open, airy sound.  We got a Lollar in here so it has a very nice percussive low end pick up and you hear a lot of resonance when you play it acoustically.

This is our 905-CC guitar which has a Lollar Charlie Christian pickup.  We had it built where the top is a little thicker and it sounds really great electrically and acoustically it projects amazingly.

We got the purple arch top. I themed that guitar a little more art deco style and we finished it in a nice royal purple color.  The custom edition we are really trying out in our six- month launch.  If you want a purple guitar or any color, we can do that.

We have two flat top guitars down here.  This one is built off our E-20D model. Flat tops are very simple with a tortoise shell color and this one, which we did with a nice beautiful cherry yellow orange that has tortoise appointments as well. 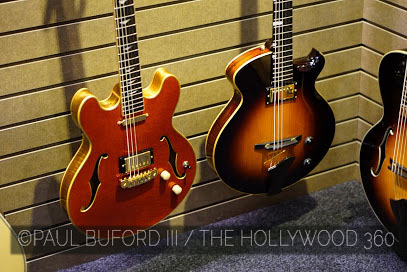 What is your background?

Otto D’Ambrosio:  I am a bass player.

I started designing when I was 13 years old and I worked for a number of stores and builders and factories.  It’s been my DNA. 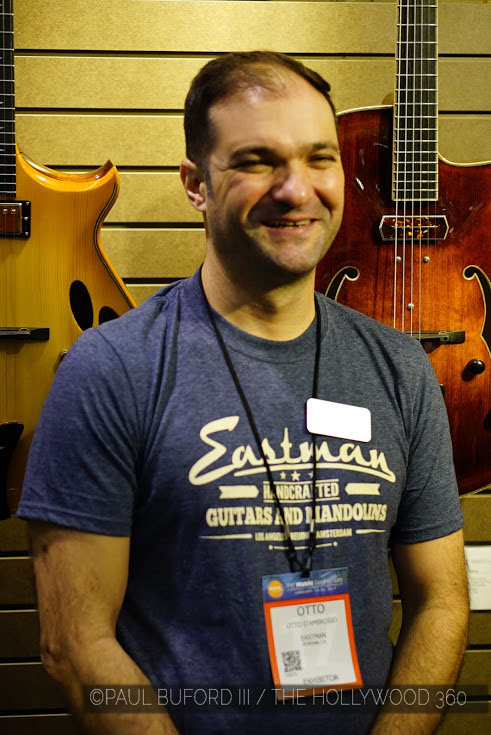 The Hollywood 360:  Talk about Eastman and why they are such a successful company.

Otto D’Ambrosia:  I’ve been working with Eastman in partnership for about twelve years now.  I started with just consulting and designing, then that branched off to the El-Ray which is my signature model.  They are custom built by Eastman from my design.  That’s ER-1 down there. from there doing more designing and doing trips overseas in the company as a whole to make better instruments.  Two and half years ago 2014 they offered me a permanent positon on their design team.

The Hollywood 360:  Who are some the musicians that play the guitars?

Otto D’Ambrosia: This guitar was originally built for Pat Metheny, AR905 CC. He said it was the best guitar that he ever played.  I don’t think about players, I think about individual people that I speak with that want to make something that only appeals to them.  I try to give them a visual interpretation of a feeling or something to push into a guitar. 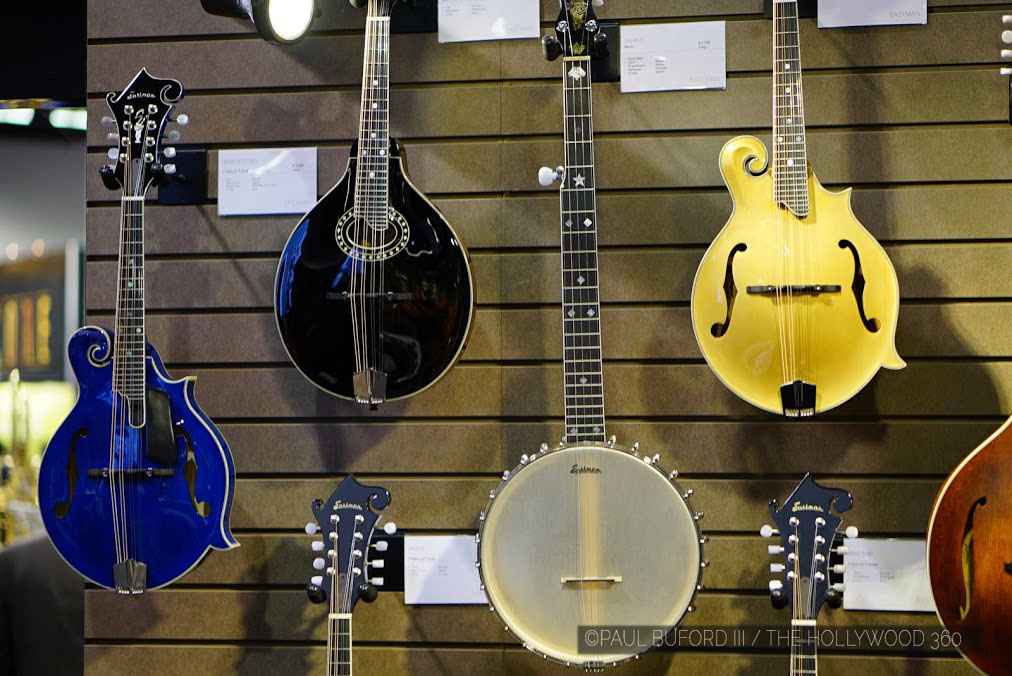 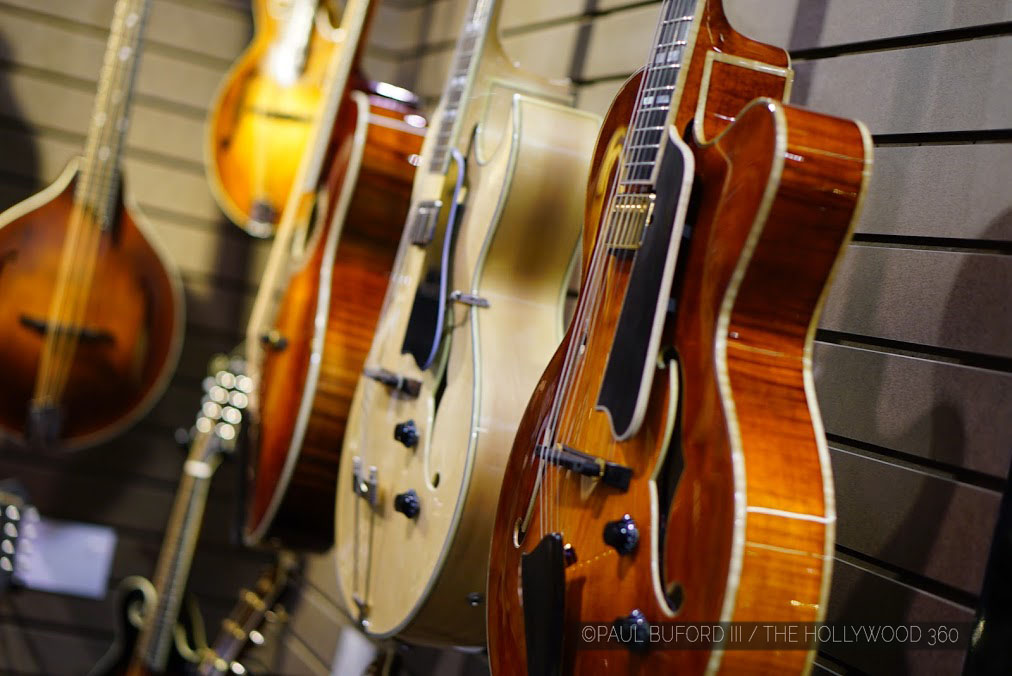 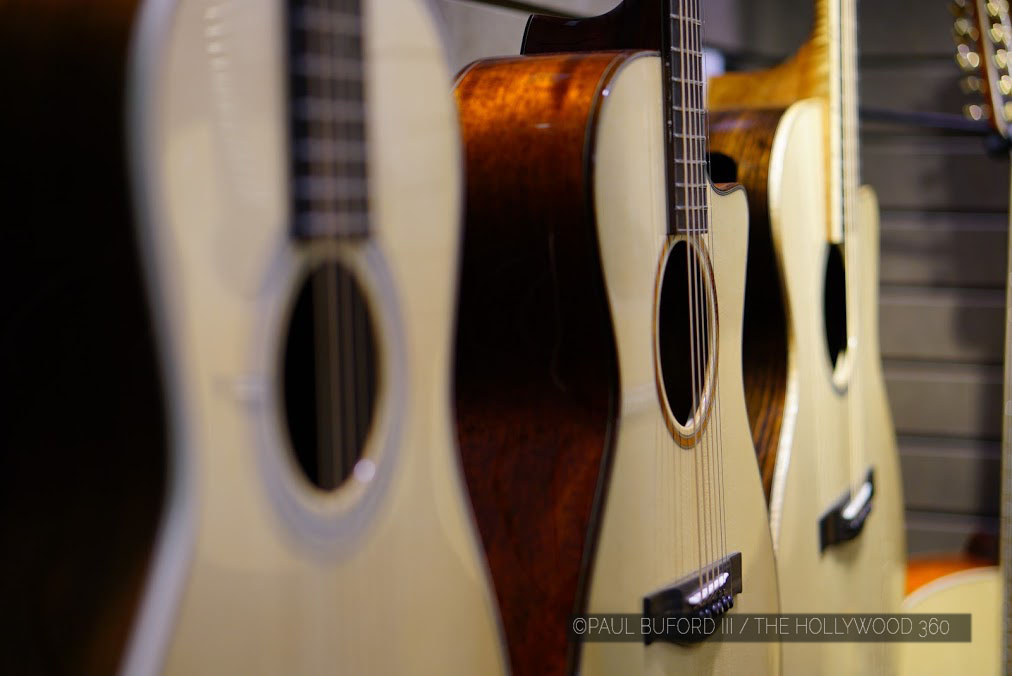 As we looked over all the lovely handiwork of the guitars hanging on the wall… Otto D’Ambrosia said fondly:

In a couple of weeks, they all move on to their new homes.