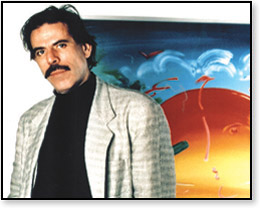 The very name Peter Max conjures up memories of psychedelic, vibrant posters hung on my bedroom wall, as well as, college dorm rooms all over the world in the late 60’s and early 70’s. However, Max is so much more than just a poster artist; he’s a record setting, pop culture Icon. Max’ handiwork has been seen on airplanes, album covers (although widely believed, Max in fact did not do the Beatle’s Yellow Submarine Album cover!), U.S postage stamps and tee shirts. Max has been commissioned by the GRAMMYS, The Super Bowl, and 2006 U.S Winter Olympic team , just to name a few and has painted for six U.S presidents His artwork can be found in galleries all over the world.

Beginning Saturday, February 28th, 2015, Gallery 319 (www.gallery-319.com) in Woodland, Hills will feature a collection of never before seen paintings carefully selected by Peter Max. This extraordinary retrospective spans over four decades and is available for acquisition at the gallery. Max will make an appearance at two, open to the public “Meet The Artist” receptions on Saturday, March 7th from 7-9pm and again Sunday, March 8th from 1-4. RSVP required.