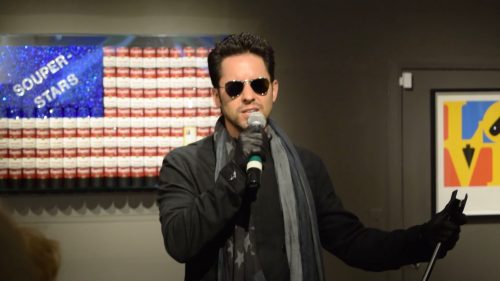 Beverly Hills–  “I never expected to have a show. It keeps me sane as an actor to have something to work on in between shows and auditions,” Young continued, “Most of (the food) is iconic. The packages never changed. I loved finding ways to play with them. I essentially got to play with my food.”- John Lloyd Young expressing his thoughts during an interview from his first art exhibit “Food For Thought” in May 2010. Young credits his manager Dona Miller for helping to get him “out of his head,” during the time he was between auditions and shows by suggesting he do something with art since he was always talking about it. Miller presented him with his first art piece idea – two identical mannequins from Miller’s successful mannequin company. That gift from Miller launched Young into the world of Mixed Media Art.

The evening began on the sidewalk as I approached the gallery and immediately my attention was drawn to Young’s stunning mannequin piece called “Venus”. Lying across a raised black platform, mirror in hand, lighting perfectly aimed to capture her in all her silver, bejeweled splendor. She seemed to beckon and then almost defy the viewer to try and take their eyes off her. She knew it couldn’t be done, all the while never taking her gaze off the mirror. The positioning of Young’s Venus in the window demands the attention of the passerby to take in the aspects of love, beauty, sex, fertility, prosperity and desire. Venus is a testament to Young’s eye for capturing the true spirit of the Roman Goddess for whom he named the piece. For this reporter, Young’s “Food For Thought” opening was already making me think!

Upon entering the gallery, Young’s iconic comfort food Mixed Media Art seemed to be floating on air as gallerist David Galgano worked his magic and presented the pieces as if they were on brightly lit, white grocery store shelves. The presentation worked as guests definitely were “shopping” in Hamilton Selway’s little grocery store. Young’s art pieces were flying off the shelves even before the artist arrived!

The exhibit was set up on each side of the gallery, where all of the iconic comfort foods of my childhood come back to life. It was like a walk down memory lane; there in all their bejeweled glory were Twinkies, a Jif peanut butter jar, and Milk Duds, the theater candy of choice for me and my brother Jim.

Such a fun display of an artist clearly having some fun playing with his food!

Each iconic piece had a snarky play on its title that pertained to the piece. For example, the spam piece was called “Wham Bam Thank You Spam.” The Twinkies – “Rhinestone Cowboy”, and with a playful take off on a hospital scene with a Ritz cracker box in an I.C.U ward, with an I.V of Cheez Whiz, called “I See U”.

Young’s humor could be found in secret places, in full view if you were alert! 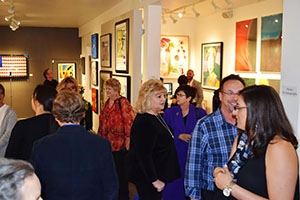 The gallery opened its doors at 5:30 pm and the guests were already lining up outside. We were all excited to be a part of John Lloyd Young’s special evening.

Many of the guests had the pleasure of attending Young’s latest concert at Sterling’s Upstairs at The Federal in North Hollywood two weeks before. So, the thought of being able to hear him sing, as well as take in his art was a highly anticipated event.

Often times when it comes to a musical theater performer you’ll hear the words if they are exceptional in their field “He’s a triple threat!” Those words almost always refer to the performer’s ability to sing, act and dance. I’ve had the privilege of experiencing first hand John Lloyd Young, having seen him perform in film and live at several of his concerts; the man is definitely a “triple threat!”

However, this evening I had the thrill of experiencing Young as I have never seen him before. This evening, surrounded by his fans and friends, I witnessed Young present him self as the Mixed Media artist, the incredibly talented singer and the actor. All three combined resulted in Young hitting the trifecta this evening much to the delight of all in attendance.

Arriving just a few feet ahead of Young was his manager Dona Miller, and on her shoulder was a beautiful rhinestone spider pin. Its size was almost alarming, but once Young arrived the theme of the evening seemed to come into place.

Right behind her came Young, dressed head to toe in black, wearing aviator sunglasses, black gloves, a black scarf and carrying a walking stick with a silver skull. Gone for this evening at least was the polished, charismatic, communicative, dressed to the nines John Lloyd Young. In his place was the pop artist Ahhhh….foreboding, edgy, quiet and sporting some facial hair that I’ll have to say he wore well.

As I watched him make his way through the crowd and into the back room, my mind was taken back to the Jersey Boys movie to the scene where Tommy Divito first heard about Bob Gaudio. To steal a quote from Tommy Divito in the film “Jersey Boys” with just a touch of modification, “Bells were going off in my head, a guy who can sing, act and create pop art, sign him and you’ve hit the Trifecta!” What a fun evening I had covering Young’s special event. I’ve been following Young’s career since last summer when he burst back on the scene starring as Frankie Valli, a now iconic role that Young originated on Broadway, and returned to do in Clint Eastwood’s film version of “Jersey Boys.” This was no Jersey Boy here tonight. What we had here tonight was a man determined to make his mark in the art world. And from what I was seeing, Young was accomplishing just that. The energy level was through the roof, with Young’s CD “My Turn” playing overhead. The time was drawing near for the “singer” John Lloyd Young to take the stage.

The crowd began to grow more excited as Young’s Music Director Tommy Faragher made his way to the front. I just have to say this about Faragher; he is kind, funny, and a very accomplished, talented man in his own right. Faragher always takes the time to talk to the fans, as well as agreeing to pose for pictures with them.

Faragher usually has Young backed by a tremendous five piece band, however, this evening it would just be Faragher and Young. Young would be performing a few songs selected right off his C.D. “My Turn.” The announcement was made and up walked Young to the stage wearing his sunglasses, he never took them off the entire evening. Usually talkative and animated on stage, Young was quiet and let the music speak for him. Young sang three sets. The first two had two songs apiece, the last only one. The first song choice was “My Prayer.” And as expected Young’s vocals were top notch, smooth, strong and gorgeous. Moving on to “Ebb Tide” closing the set on a note so strong it was almost deafening in the small space. However, none of us were complaining; we were once again caught up in the magic that one experiences when hearing John Lloyd Young in his element.

Young then left the stage, smiling as he walked through the crowd. In between Young’s sets, guests could be heard discussing how creative and funny Young was in his art selections. How hilarious it was when they discovered a few “hidden” extras among the art work, little personal “Easter eggs” as it were. It was almost as if Young put them there for his trusted fans to find and delight in! Young came back out two more times, with each set he seemed to relax; he knew he was among fans and people he could trust. For the second set Young brought out “Hurt So Bad”, the American version of the Portuguese “fado”that he is so famous for in concert. Again, Young left us all heartbroken as he quickly moved from there into the last song of his second set “Unchained Melody.” Young was back out shortly thereafter for his final song selection of the evening “Hold Me, Thrill Me, Kiss Me.” This song is always a crowd pleaser, and tonight was no exception. To coin a phrase I’ve heard Young use in past interviews “They were butter in our hands.” Indeed Mr. Young!!

Linda Smith Bradley had this to say about Young’s closing song. “This was even a very different experience from Sterling’s .The experience at the gallery was even more up close and personal. The gallery was well lit, and had a much less “formal” feeling, like he was just jamming with a group of friends at a party. A lot of us were singing along to “Hold Me, Thrill Me, Kiss Me, and near the end he even stopped singing for a few notes and let us just sing. He was having fun with it!”

Bradley drove in from Las Vegas for the event with her friend Diane Thomason and both went away not only happy, but each the owner of one of Young’s art pieces. Bradley bought Young’s jewel encrusted Corona box called “Salud,” and Thomason purchased the jeweled box of Equal called “Equality: Real Sweetener.” Collectors of Young’s art flew in from all over the country some as far away as Baltimore, just to be in attendance and to support Young’s work. Gallerist David Galgano had this to say when I asked him what he felt about the events of the evening. “We were all THRILLED with the event, ecstatic to see all the fans that turned out in support of John Lloyd Young’s art it was a wonderful evening.”

For a “wonderful” experience of your own take a trip down to Hamilton Seaway and check out Young’s remaining pieces from “Food For Thought.” All pieces are available from the gallery for acquisition. Gallerist David Galgano will be on hand to answer your questions.

My Turn is available on iTunes and Amazon

Many thanks to the photographers who so graciously allowed me to use their images!