The intense 19 minutes of this short had me on the edge of my seat. I found myself in the gridlock with the people. I saw the accident and felt the urgency of the situation. I breathed the air, and absorbed the mistrustful energy of those around me. As the gridlock continued on I began to, identify suspects, and make assumptions on how this will end and who was to blame. One of the most nightmarish events to happen, suspecting your child was abducted had me panicked with the father. His baby girl was missing.

What’s more intense is the “knowing” you have, that everything is not the way it’s supposed to be. Something’s not right. I felt in my hand the tire iron and how bad I wanted that “boot” (trunk) opened. I looked in the eyes of the people and observed their behavior, and listened intently to their words, searching for clues. While dad began to meltdown, and the stranger began to lead him away I felt dread. I wanted to yell out, “don’t go too far, stay close!” but the criticalness of the moment did not allow me to. He had to find his daughter. As the ending approached my mind was in circles. The word “monster” made my heart skip.

The situation was dire; It was then the father ran away and the “monster” was found calling the daughter’s name. As in every case, the least one you suspect is the one you need to investigate. This film was executed precisely. 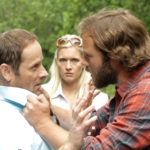