Kiki Ebsen Honors Her Father In A One Woman Show

On December 28th (which is my birthday) 2016,  Kiki Ebsen will be presenting her fabulous show: To Dad with Love: A Tribute to Buddy Ebsen featuring Kiki Ebsen, at the Catlina Jazz Club.  I had the pleasure of seeing her spectacular performance last year and plan on being at this performance to celebrate my birthday. 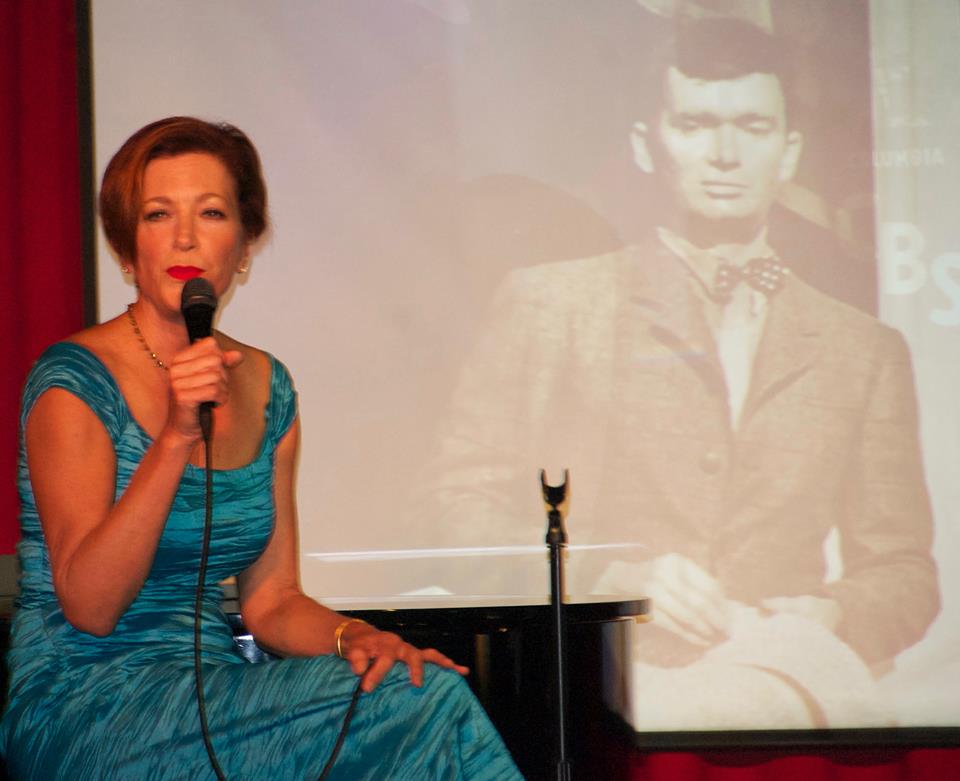 I highly recommend Kiki Ebsen’s one- woman show.  Here is my review from last year.

Like father, like daughter…Kiki Ebsen illuminated the stage last Saturday night with supreme elegance, grace, and a voice of voluptuous earthy tones as she performed her one woman stage production: To Dad with Love: A Tribute to Buddy Ebsen.  Ms. Ebsen strutted her stuff with complete ease and assurance, claiming her blood right. It was evident that show business bolted through her genetic makeup.  A delightful slide show characterizing Buddy Ebsen’s career, created by filmmaker/brother, Dustin Ebsen, embellished her vocals and storytelling.  Buddy Ebsen definitely was looking down from above smiling and feeling proud of his lovely daughter. 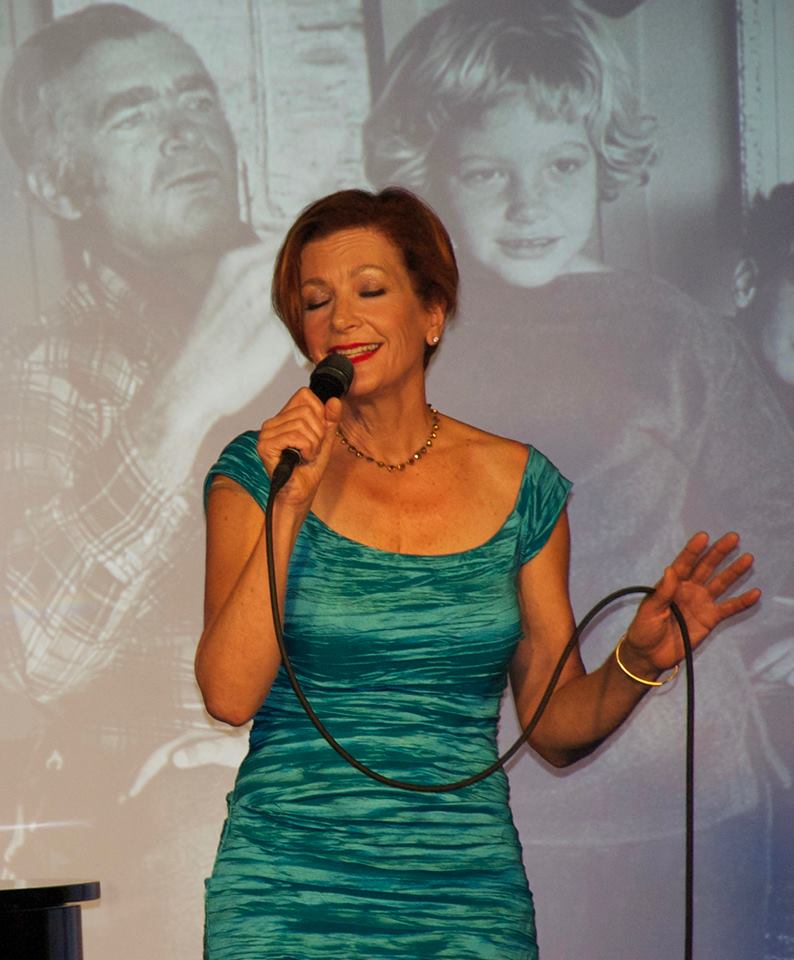 “My dad grew up in the era of the great American song book.  And I grew up in the era of Black Sabbath.  My dad had his heart set on me being a jazz singer…but I wanted to sound like Ann Wilson from the rock group Heart.  So we did not clearly see eye to eye musically.  I went on and forged out my own career and performed with groups like Chicago, Christopher Cross, Box Scaggs and Tracy Chapman,” Kiki explained to the audience.  “When dad came to see me perform… he would look at me like what???? Not understanding the music.” 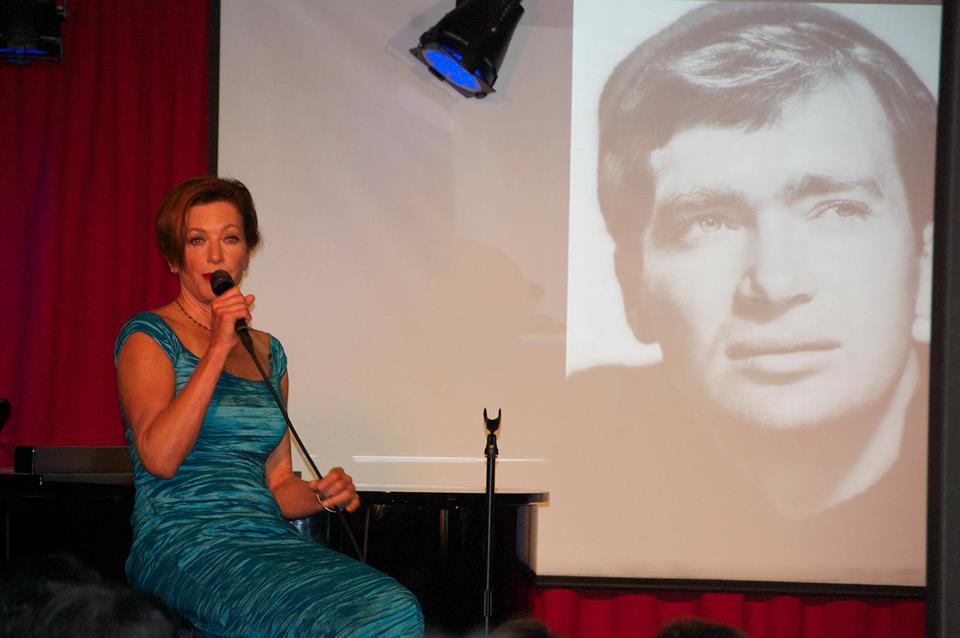 Ms. Ebsen then told a story that changed her attitude about her father.  After her father passed away she was going through old pictures that were tucked away in her mother’s attic. These photographs reflected how her father got his start in the entertainment world.  Kiki knew very little about this part of his life because he was already a big star on the television series, The Beverly Hillbillies when she was born. 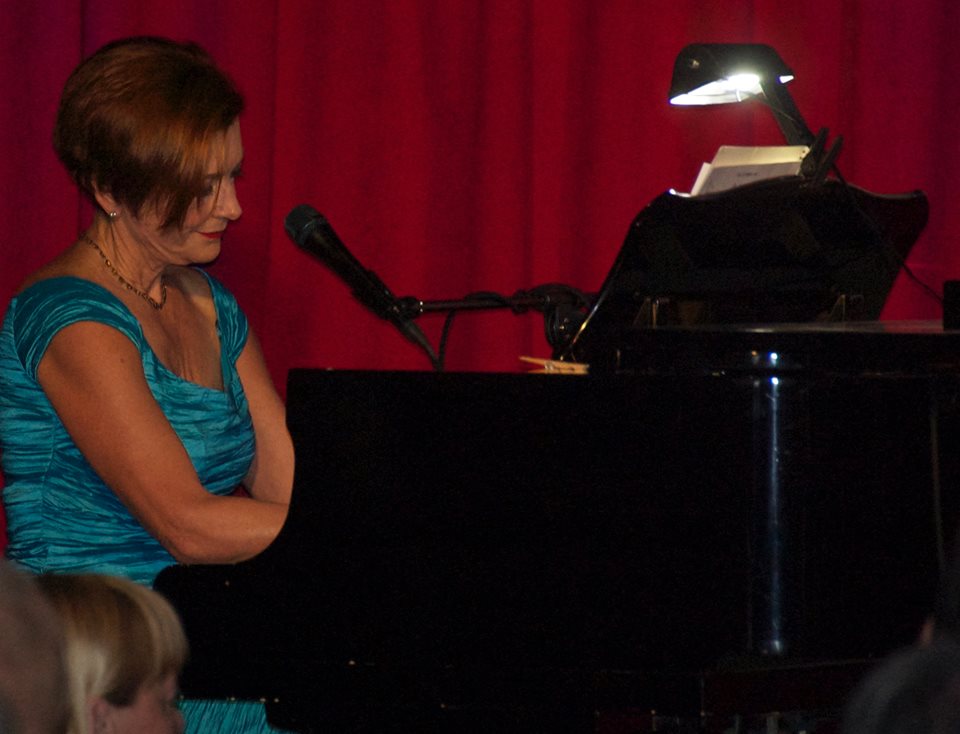 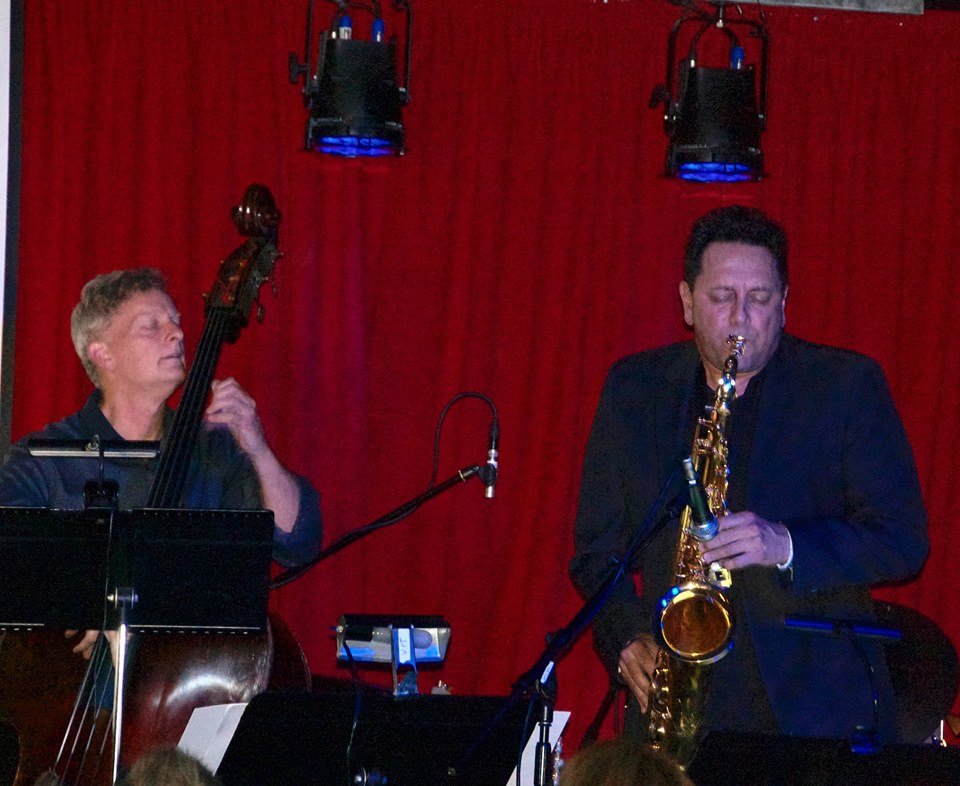 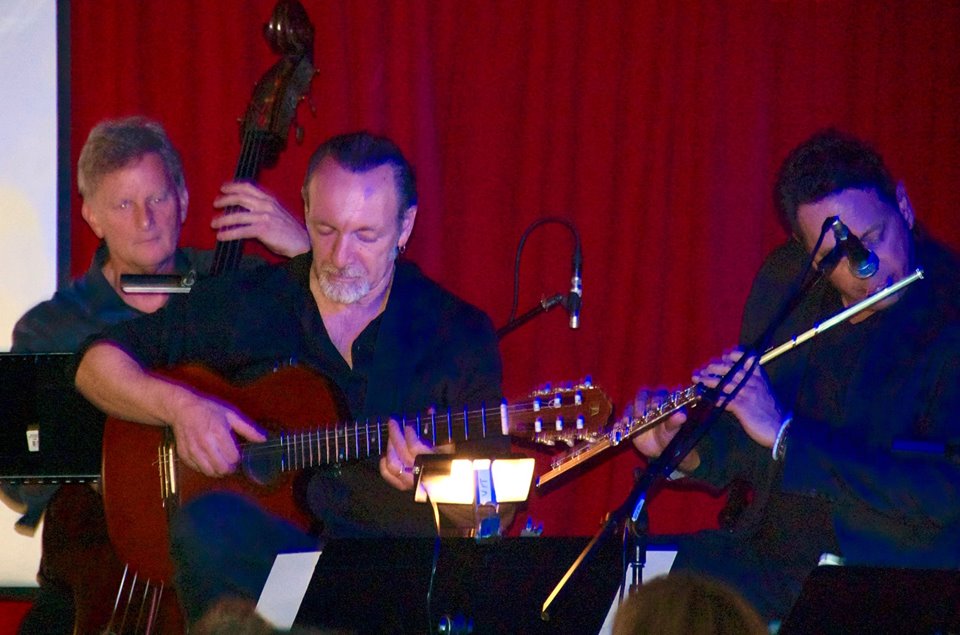 When her father tried to tell his children stories of how he went to New York City with $26.65 in his pocket…Kiki imitates her father’s voice here…she revealed how the story was boring to her.

A very different reaction happened when Kiki discovered these treasures in present day. “I got chills because there were letters to his family, photographs I had never seen before, Broadway musical programs, scripts from shows like Born to Dance, Broadway Melody from 1936, and then I found this incredible find…the song book from the Wizard of Oz.”  A pause.

“The songbook had his name on it saying he was the Scarecrow…and I asked myself, “Who is this guy?’  Who is this guy I called my Dad.” 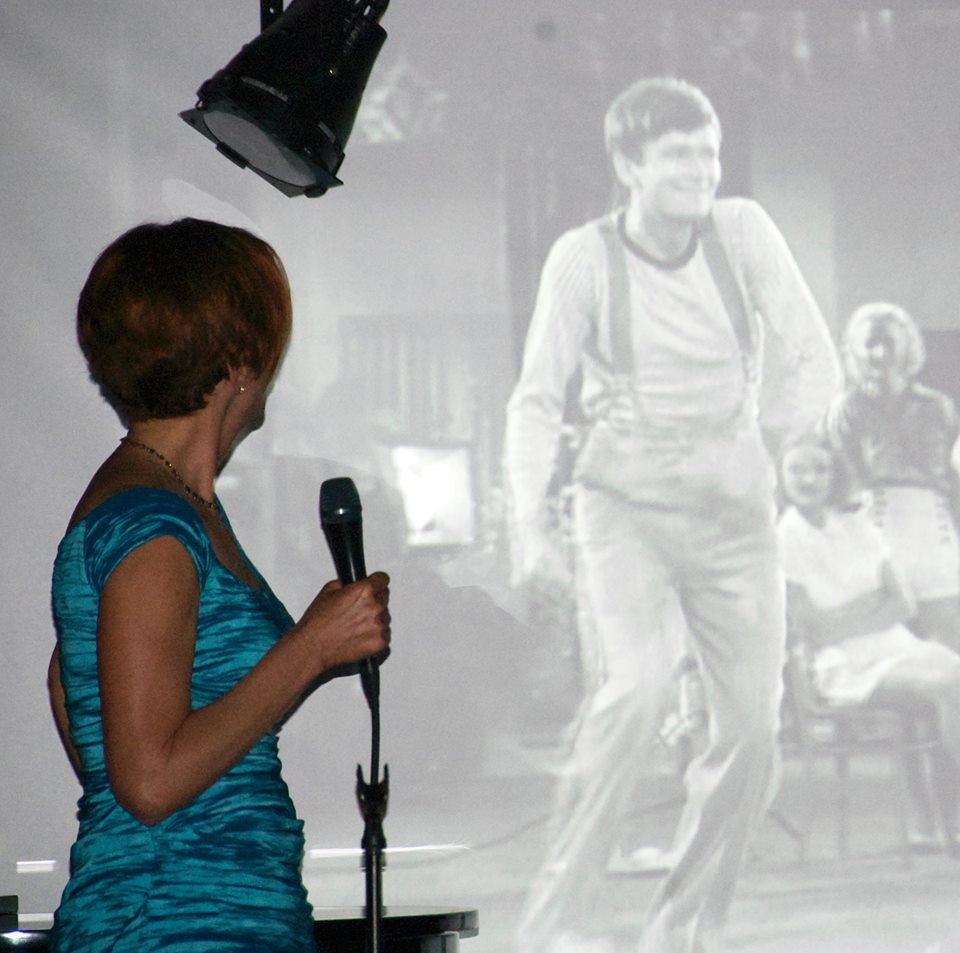 That question gave birth to Scarecrow Sessions, a CD that was a tribute to Buddy Ebsen’s vast career.  Kiki called upon a longtime collaborator, David Mann to help produce the project.  Nine of these songs were performed this evening and one original composition written by Buddy Ebsen called Angelica. 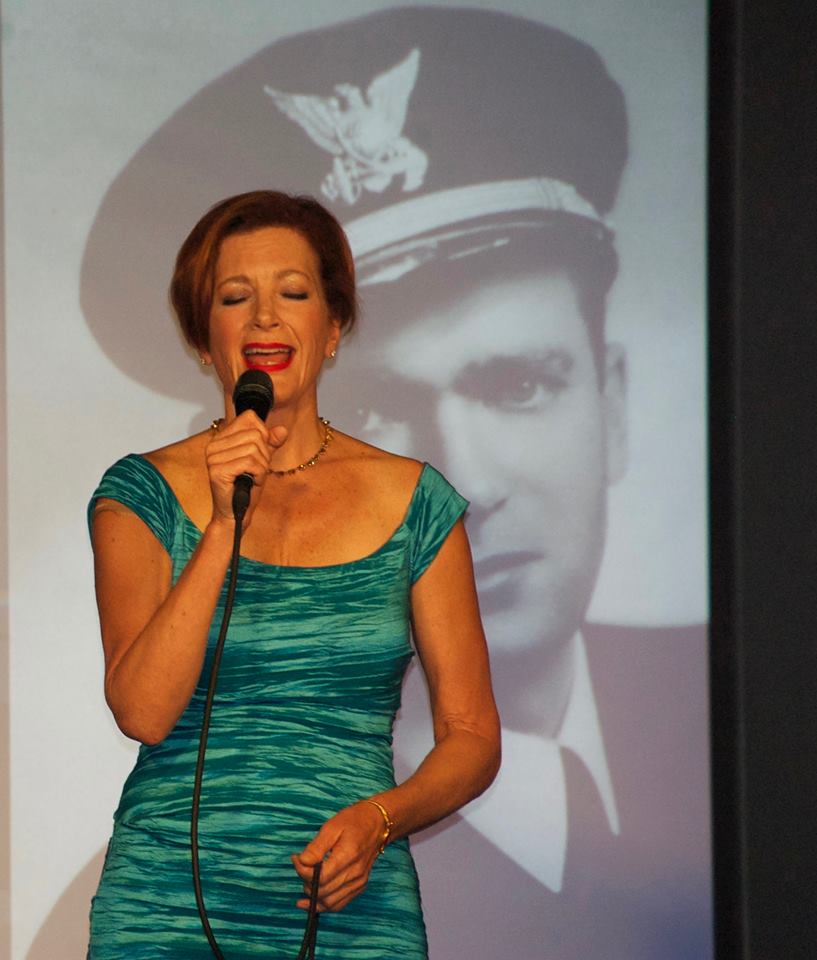 A Tribute to Buddy Ebsen began with Ms. Ebsen rising up from behind the piano and walking front stage, donning a stunning, turquoise satin crepe gown.   The sentimental song Missing You sweetly spilled out of her throat as a montage of photographs of Buddy Ebsen swept across the screen behind.  Like an old-fashioned torch singer she mastered the song and added her unique phrasing by bending the line…Missing You.    While her father made love to Eleanor Powell on the screen, Kiki broke into the romantic rendition of Easy to Love then took off scatting.  She singed the airwaves with her improvisation. 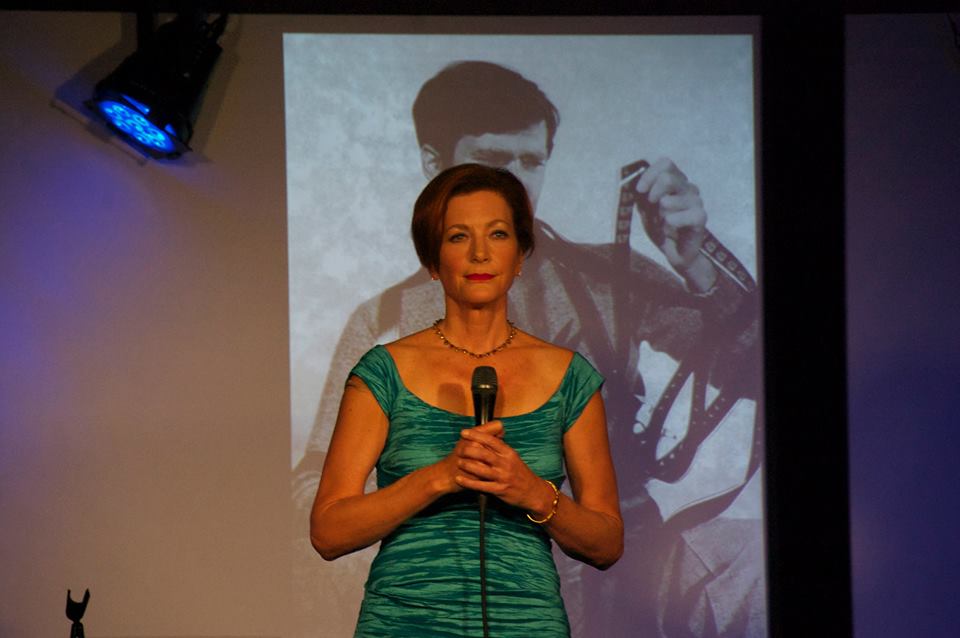 Breaking into her monologue, we heard comic stories about the swimming cat that was a big star on The Beverly Hillbillies because the feline made an appearance in Breakfast at Tiffany’s as well.  Ms. Ebsen then talked about how she knew Phil Silvers because he played the slimy salesman on The Beverly Hillbillies, but he and her father had also starred in a Broadway musical called Yokel Boy.  The jazz standard, Comes Love was then sung with the expert backup of acoustic guitarist, Dori Amarilio, Kendall Kay, drums, John Leftwich, acoustic bass, and George Shelby, woodwinds. 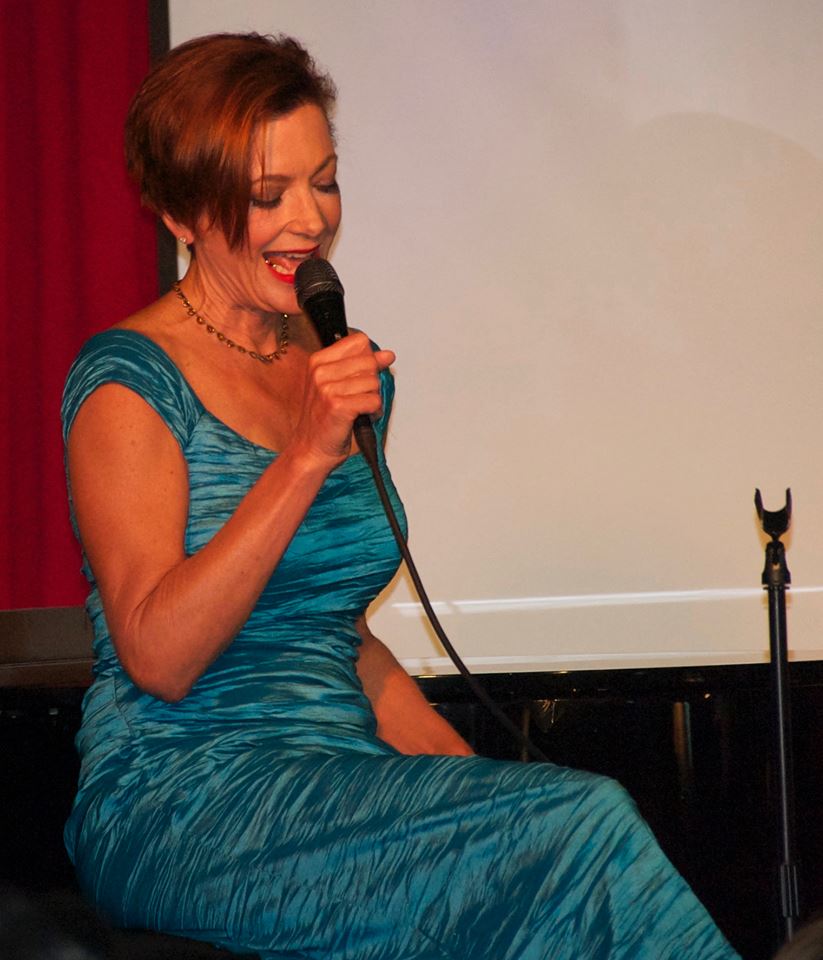 It was time to tell the story about Buddy Ebsen’s involvement with The Wizard of Oz.  He was first asked by MGM to play the Scarecrow but when Ray Bolger displayed his rubber legged dance…Buddy was then given the Tin Man role.   However the silver, aluminum makeup that he had to wear everyday was toxic to Ebsen’s system and he ended up in the hospital.  Needless to say, the Tin Man’s character was handed over to Jack Haley because the studio had to keep shooting the film.  This incident proved to be quite upsetting to Buddy Ebsen but for the 50th anniversary of The Wizard of Oz, Buddy Ebsen received credit for his voice on the soundtrack.  Kiki then paid tribute to her father by singing If I Only Had a Brain with a voice that exuded a sexy, slinky control yet also had strong earthy colors.  The brilliant sax playing of George Shelby accompanied the artist as she scatted copper colored lines. 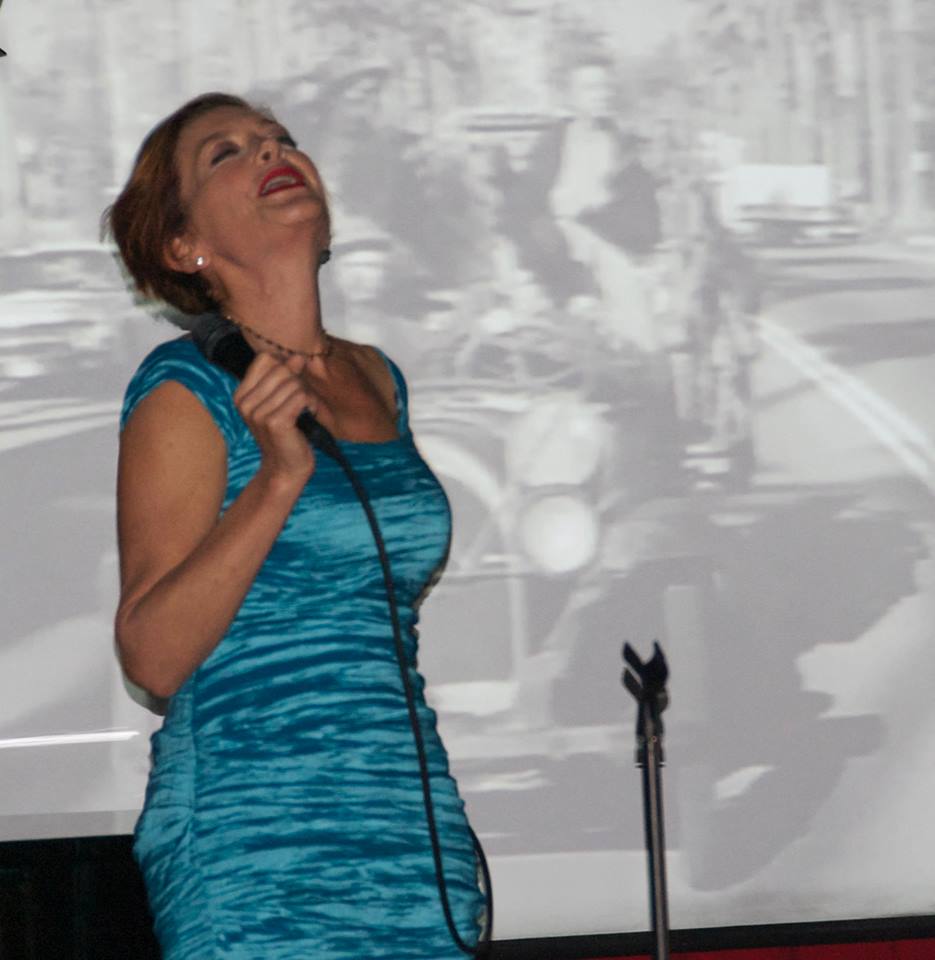 Letting us know that her dad was also a songwriter, Ms. Ebsen sang an amusing child’s song called Angelica.  She mimicked a little girl’s voice that was misbehaving which made everyone laugh.

We were then treated to film clips of Breakfast at Tiffany’s as Buddy Ebsen played the role of the jilted husband to Audrey Hepburn’s infamous character, Holly Golightly.  Kiki Ebsen said, “I hated seeing the pain in my father’s eyes when he shows how much he loved Holly.  I realized Dad was really a good actor.”

The vocalist then enchanted the audience with a hauntingly gorgeous arrangement of Moon River.  Her voice had an unearthly quality.  Yet, when she switched moods to the bluesy tempo of St. Louis Blues, Ms. Ebsen belted out the lyrics with impeccable class and crazy good chops. 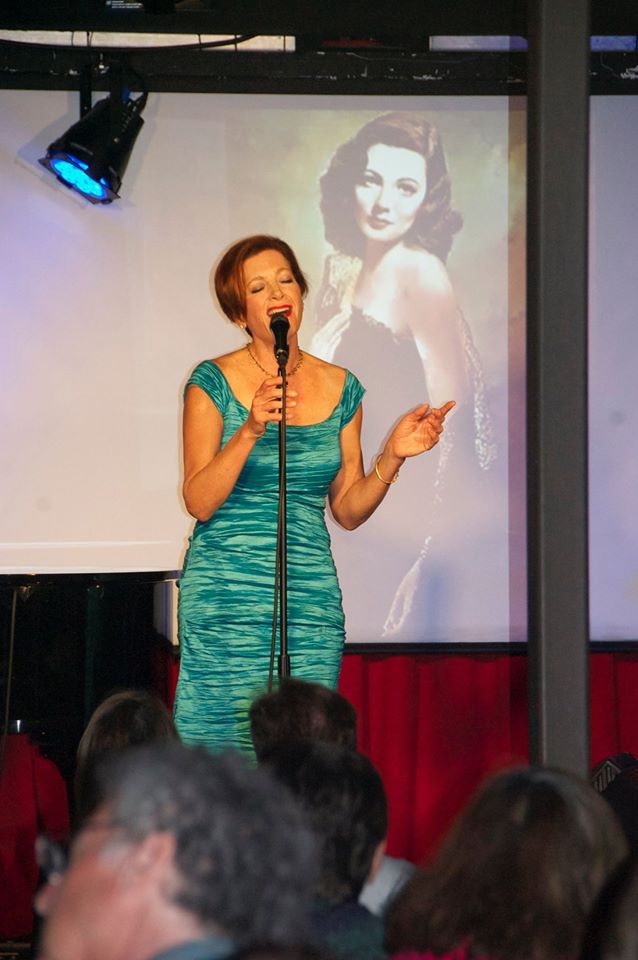 The ballad, Laura was presented humorously at first, because Kiki was imitating how her father used to sing the serious love song by pretending Laura was his ladylove as a microphone.  Her comic timing and delivery of lines reflected excellent acting skills.  Then she reined it in with gorgeous vocals.  When Kiki showed the wonderful film clip of Buddy Ebsen tap dancing to The Cod Fish Ball with child-star phenomena, Shirley Temple, the audience relished the memory.  Buddy Ebsen’s long spidery legs capered across the set with swift dexterity as he swung Shirley Temple from one platform to another.  He was the perfect dance partner even though he towered over the tiny star.  We then heard Kike Ebsen belt out Cod Fish Ball, at first acappella, then the band comes in with that old fashioned New Orleans bluesy sound. 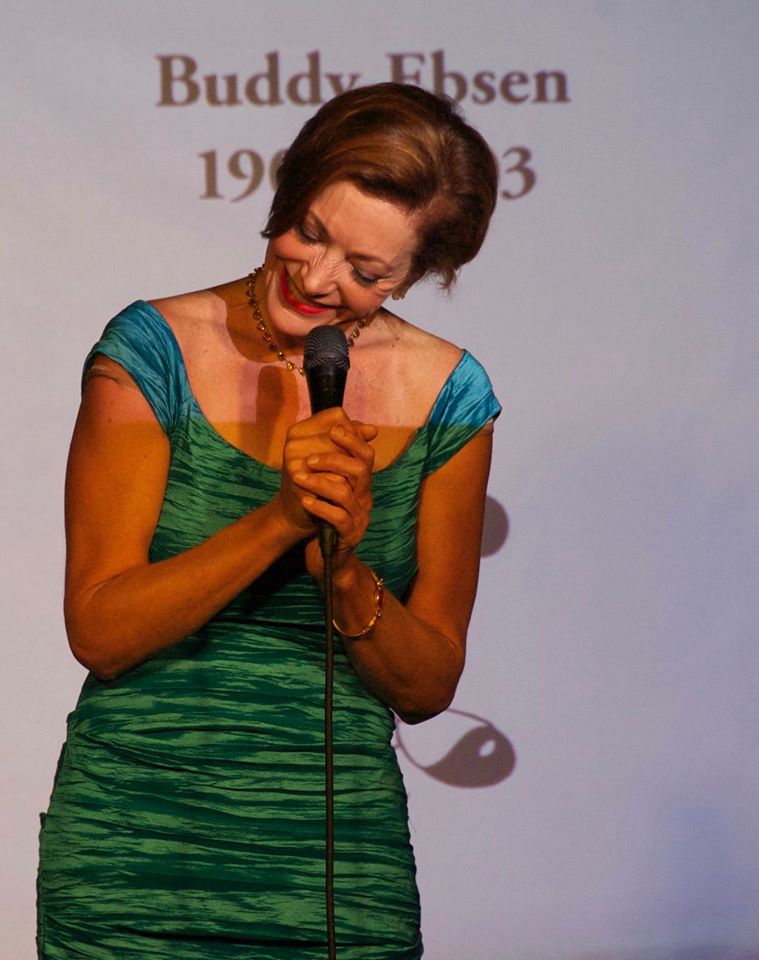 With a dramatic Hollywood ending that was a perfect way to end this superb evening of song and storytelling, Kiki said, “Vanity Fair asked my father …how would you like to die?  He said, ‘preferably with a stand in.’ “ She then opened her heart up to us all…

“Even though we didn’t see eye to eye, my father propelled me as a human, as an artist.  Doing this show brought me closer to this man I call my father.” 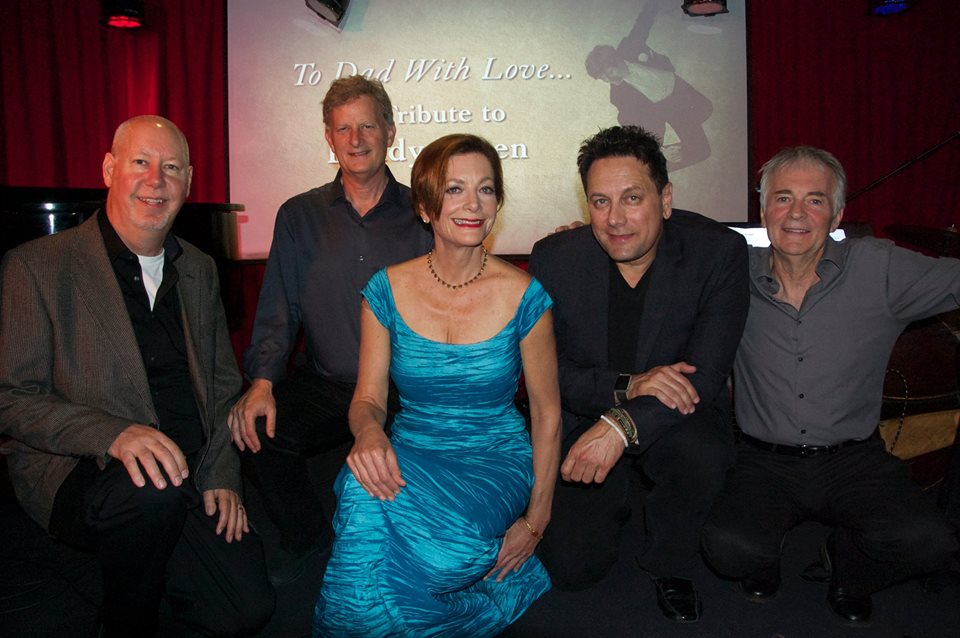 Like father, like daughter, Kiki Ebsen entertained the entire room like a consummate performer, crooning, Over the Rainbow for the grand finale.  Displaying impeccable jazz dynamics in her vocals, her father would tip his hat off to his daughter…”I knew you were a jazz singer, sweetheart.  You’ve made me proud.”

For more information about Kiki Ebsen, and her performances of A Tribute to Buddy Ebsen go to: www.kikiebsen.com 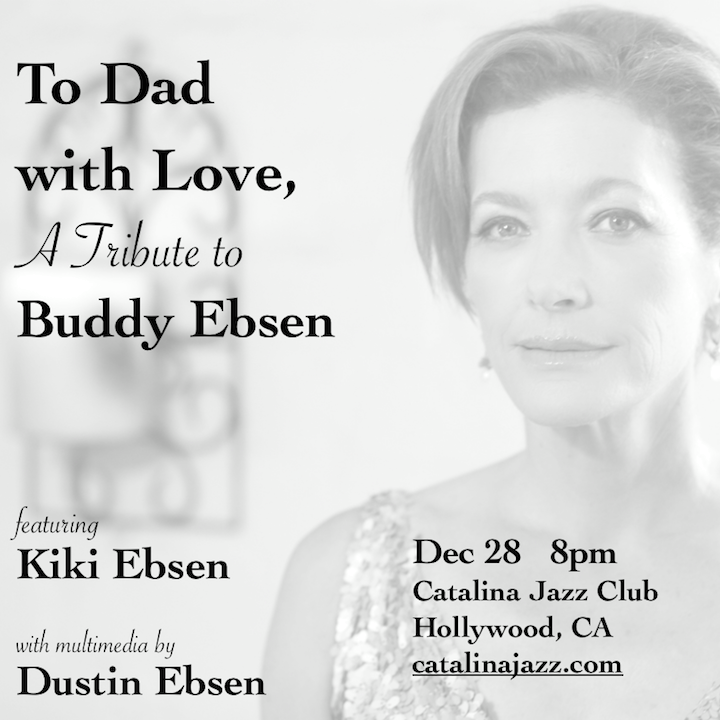