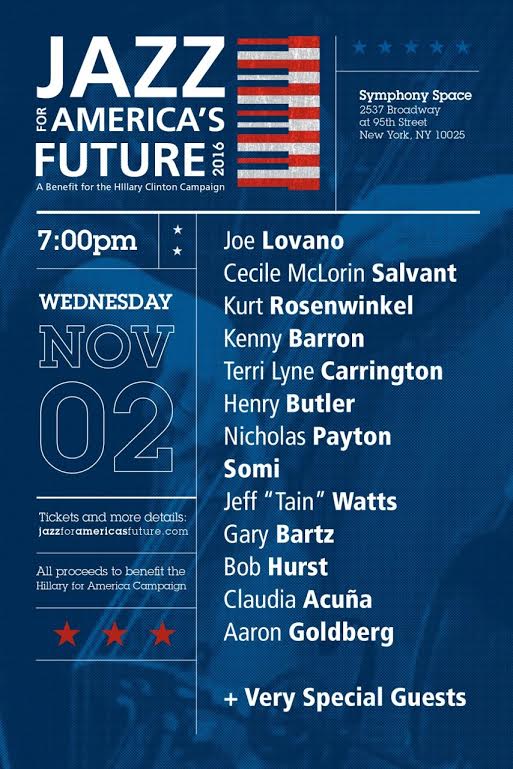 “Jazz For America’s Future is an all-star concert bringing the jazz community together in musical celebration to support the Hillary for America campaign.  We reject the divisive, incendiary rhetoric of her opponent, which violates the values of our music. We aim to inspire sociopolitical commitment on the part of both the musicians and audience. But most of all, we aim to thrill and transport our audience with soulful improvisation as only America’s greatest art form can.”

Terri Lyne Carrington, three time Grammy winning musician, expressed her delight to be a part of the evening’s concert.

“On Wednesday a bunch of great jazz musicians will gather to support the Hillary Clinton campaign for presidency. This one time only concert will be unique because of all the various artist involved, combined in different and interesting configurations. I can’t wait to play with Kenny Barron and Bob Hurst, as well as Joe Lovano and Aaron Goldberg. It should prove to be a great night of jazz for a great cause – to raise money and to raise consciousness. We are all very pleased to donate our time for this cause in support of this very important election.”

The concert promises to be a night of superb music that will inspire and support a united community behind Hillary Clinton’s Presidency of the United States.

to buy tickets or make a donation for the campaign.

A Different Spin On Love and Soul