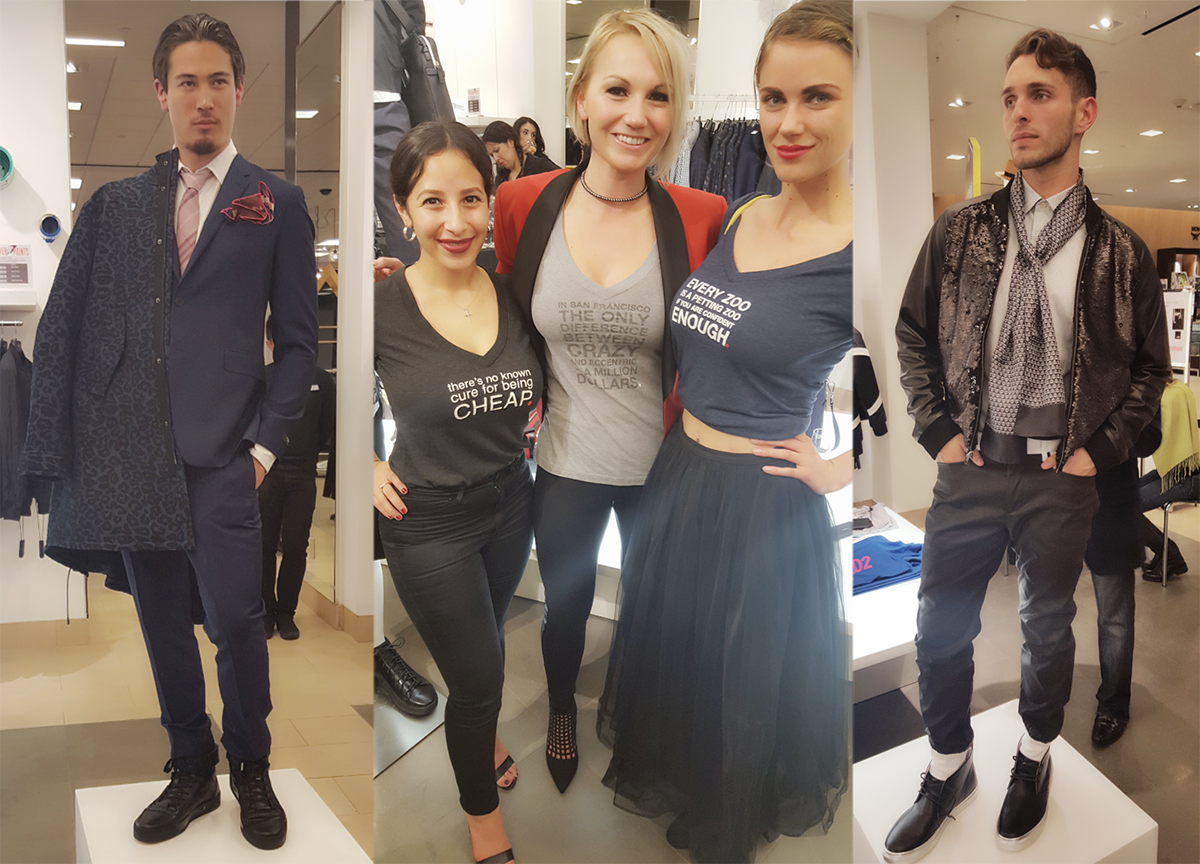 “In San Francisco the only difference between crazy and eccentric is a million dollars” is a quote from creative designer Jake Wall. Jake tells how his father expressed this sentiment and how it inspires him. This inspiration runs so deep it now appears on his line of women’s clothing t shirts.

The event was held on the fourth floor of Bloomingdale’s, San Francisco. Upon entering the fashion zone I was eloquently blinded by white glowing hues, esteemed black, and a dashes of color intermingled.  My first encounter was Nate. Nathan Johnson is Co-founder and Chief Operations Officer. My impression of Nate was nothing but positive. He was welcoming and warm and had no problem explaining logistics. Nates demeanor and clean cut good looks alongside his intelligent vocabulary makes him a great candidate for success. Nates shy smile and polite as all hell’s energy contrasted his tagline on his business card which reads: You are investing in yourself. Have some fucking self-respect.”  I knew this was a man that’s easy to love. Any man who you can bring home to mama and then who can put you in your fashion place is “the one” Well wishes to the lucky person who lays their head next to his at night!

After securing a glass of excellent tasting champagne courtesy of Gina Downing, tasting lounge manager of JCB (Jean Charles Boisset), my photo assistant and I circulated around the area checking out the clothing when I began to envision JAKEs attire on familiar male figures in my circle. As I touched fabric, ran my fingers along necklines and tweaked zippers and buttons I knew I was in the presence of talent. I also found my favorite piece hanging, not only on a hanger but on the back of a live mannequin model. The black jacket with the impressive roaring animal face on the back screamed “attitude”. I knew in that moment, risk taking was a sign of greatness and not everyone can be a risk taker.

That next moment led me to Jake. After introductions, he confidently began with a story that jolted him from a dreamer to a doer: As he is shopping in a local health store he finds himself between two people. A man dressed head to toe in designer attire sporting classic tattoo designs and a woman with a skirt to the floor, seemingly bought from a thrift store. This sight ignited the introspective thought that the woman probably had little choice in her attire and what was the man’s excuse? As we laughed at his story I, unbeknownst to him, reviewed in my mind in that split second if I possessed any of the aforementioned designer clothes (I was in the clear as I did not) he proceeded with his father’s encouraging words regarding dating: “Every zoo is a petting zoo if you are confident enough” (Jake Wall 3-10-2016) This quote from his dad stayed with him and was instrumental in pushing confidence and it was this quote I wholeheartedly embraced. I decided I would start petting the animals in my zoo!

As the evening was progressing, the dj playing her tunes and the bubbly kicking in, my assistant and I mingled with guests who all seemed thrilled to be there. One fashion tech and photographer in particular, made quite the impression. Owen Geronimo, camera in hand and dressed to perfection finally graced us with time to chat. We learned he was fashion savvy in comparison to the linguistic creatologist title that I hold. He spilled the essentials in a brief San Francisco fashion pace and enthralled us with his confidence in the tools of his trade. I deduced he was only missing the spin of a linguistic creatologist such as myself and Chap Stick.

Climaxing the event were the models themselves perched on their pedestals as their perfectly chiseled features and stone faced mannequin like presence highlighted the new textures and spring looks Jake created. With each new outfit I found a favorite piece. His spring shorts were another featured prize among the many.

You had me at “sequins jacket”

Owen Geronimo and his camera

A perfect piece and the coat ain’t bad either.

Bloomingdales and Designer Jake spared no expense when it comes to class, talent and beautiful people. Those in need of assistance for classy spring looks may look to JAKE to outfit them on the edge of fashion. First impressions are essential to the expansion of a loyal following and JAKE seems fit for the ticket. A personable, smiling, entertaining man with energy that was catching had me at sequins jackets and my belief of “a man is only as successful as his attitude” (Rena Renee 2016) was proven by DESIGNER JAKE.