Every Entertainment Reporter must start somewhere.  My career as an Entertainment journalist began in my favorite city of Paris, France.  From the end of July 2014 to the end of August, I visited Europe.  During my stay, my dear friend Aline and her husband, Nicolas, treated me to this one -man show starring the effervescent and humorous, actor/comedian Olivier Giraud.  I instantly contacted Olivier’s publicist to set up an interview with him and viola… here’s my article that followed. 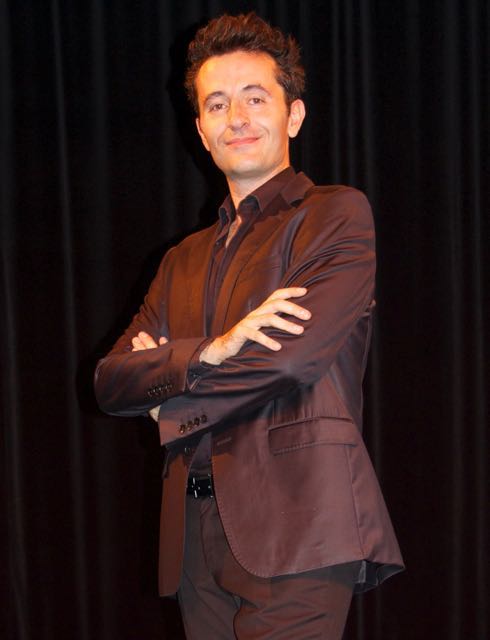 Monsieur Olivier Giraud is still performing today!  If you visit the City of Love, you must go see this hysterically funny show.  It’s all in English!!! Find out why right here in The Hollywood 360.

“How to Become Parisian in One Hour – “ The show is more famous than me,” says the humble but very dashing, magnetic movie star good looking, creator, Olivier Giraud.  “When I walk the streets of Paris I am hardly ever recognized.  But every once in a while a Parisian will say to me in The Metro, “Vous etes le Parisian: One Hour.”  Translation: You are the Parisian: One Hour!

This writer/humorist is not interested in fame and doesn’t consider himself a playwright.  However, after 5 years of 900 performances to sold out crowds, this Frenchman is charming the pants off tourists, foreigners who live and work in Paris, ex-patriots and the most important but tres difficile audience: Parisians.  Ooo la la! 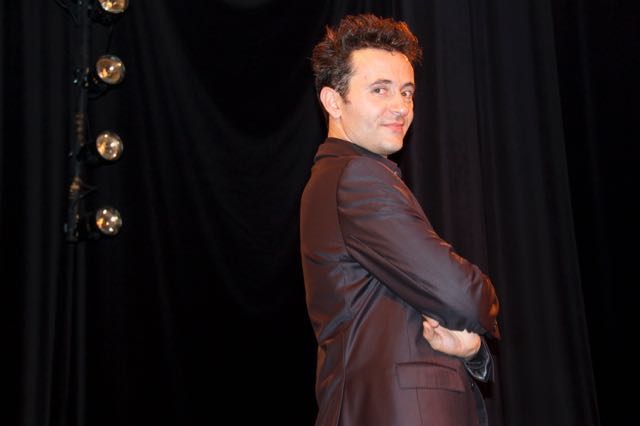 Moi…being a wannabe Parisian, an ex-New Yorker, Bostonian, Los Angeles, now Orange County resident, laughed until my stomach hurt and tears clouded my eyes.  Although Monsieur Giraud did not teach me anything new about the superior French way of life, or enlighten me in how obnoxious and over the top American tourists can act, I found his show superb.  His humor dances with caustic yet gentile observations.  His high energy and enthusiasm onstage match an aerobics/zumba instructor.  His comedic improvisations and playing off the audience’s energy and comments,  exude Seinfeld Paris style.

“I heard his show is not gentle about Paris people,” said Yuan originally from Shanghai, China but now works in Paris.

“This is my revenge,” says Lucia wickedly.  She works in a Parisian company but comes from Italy.   “The Parisians can be annoying about their philosophy, their politics, their culture.  I don’t get their sarcasm either.”  Her escort agreed.  He also works in the same company. “Us, aliens in Paris complain about Parisian attitudes.  We just want to see if the jokes we tell about them at work are the same as his jokes.” 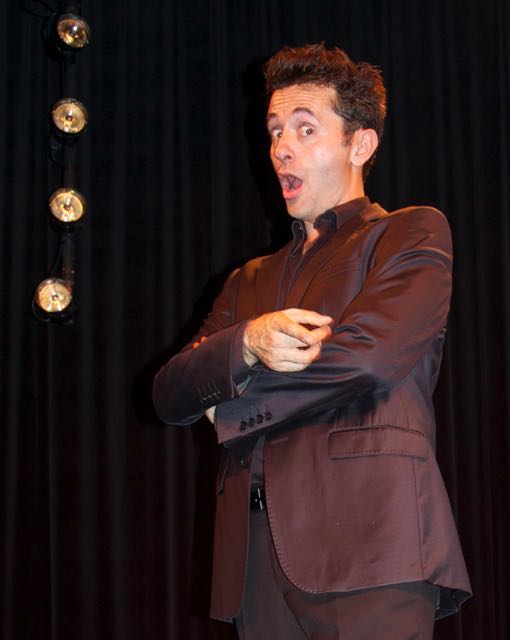 Giraud doesn’t disappoint.  As the lights of the theater dim, we hear a female, French,  accented voice asking us to please close our eyes and envision ourselves, “in a long time Paris.  You need to relax.  Now inspire.  Now expire.  (Audience laughter) Now open your eyes and smile.  Congratulations.”  Out pops our star, topping off his head is a red beret.  However, he wears baggy jean overalls with suspenders over a red- checkered shirt.  He leads the audience in the French National anthem.

The proud French peoples’ voices fill the theater, yet Giraud mocks the song by marching and conducting like a clown.  After the anthem finishes he asks the audience: “So where are you from?”  At least 10 different countries are screamed out: India, Venezuela, Finland, Africa, England, Italy, United States, Brazil, Russia, and Germany.

Giraud then disappears for a moment behind the curtain and reappears as a slick, cool, dude from Paris dressed in black with his hair full of gel.

“Are there any Americans tonight?”  Of course the American audience members cheer.  “Good for you. Any English people? Are you happy? “  The English people cheer. “Liars!” Giraud retorts.  “And if you are from a shitty country…like Germany.”  The audience howls.

“Do you all want to become Parisian tonight in One Hour?”  D’Accord.  I will teach you.”  He transforms into an entire cliché of Paris by pantomiming a person walking down the Champs Elysees.  “City of love, city of life, city of… Strike.”  He then switches to an American seeing the Eiffel Tower for the first time.  He morphs into an overly enthusiastic, blown away tourist who is so overwhelmed by the spectacle of the Eiffel Tower that all he can say is, “Wow.”  Then after many affectations the American tourist says, “What is it?” 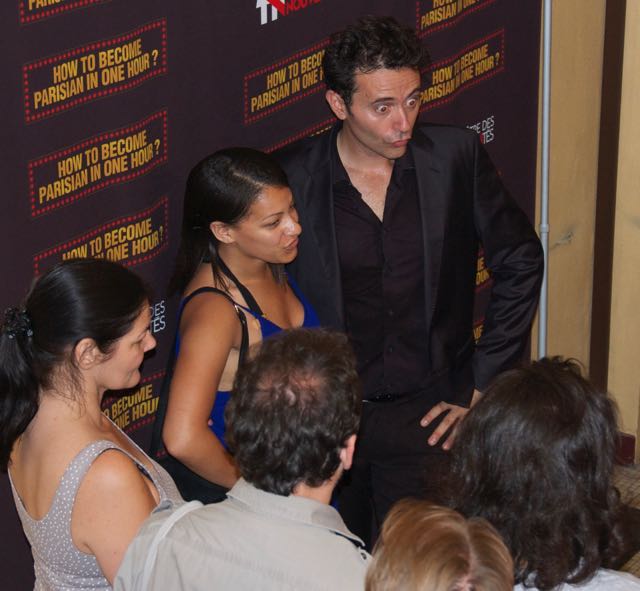 Giraud has no training in writing, acting, performing.  He left his home in Bordeaux, France at the age of 18 to become a chef.  But he does admit to telling his mother that one day he would be a comedian.  “When I was 8 years old I told my mother that one day I would become a humorist.  I promised I would buy her a nice dress after the first time I performed onstage.”  His eyes twinkle mischievously.  “Still haven’t bought her that dress.”

He graduated from the best catering school in France then left Paris in 2001 to live in the United States.  There he worked as a waiter, obtained more training in Hotel Promotion and finally ended up as Restaurant Manager at The Breakers, Palm Beach, Florida.  Having a keen observation eye and being able to imitate his American customers, Giraud developed ideas for writing his one-man show.  Wanting to pursue his dream of performing onstage as a comic, he moved back to Paris.

Five years ago, 2009 he developed his show and approached Parisian theater owners.  He got the same reaction from all, which was: “Are you crazy?  You want to do a show all in English?  No one will come to see it.”   Determined to succeed, Giraud formed his own company called, “French Arrogance Productions.”

He approached the Theatre de la Main d’Or, run by the comedian Dieudonne.  Giraud  performed there for 3 years then was able to sell the Theatre Des Nouveautes on his production because of its popularity.  This old, elegant, theater is one of the 30 established theaters in Paris.

Every night’s performance is a new experience for this artist.  He loves his job.  He loves his audiences.  He plans on performing “How to Become Parisian in One Hour” for many years with no end in sight. “Everyday is different for me.  I am always improving the show, seeing what jokes work and trying out new jokes.  If the new mimics work, it goes into the script immediately.” 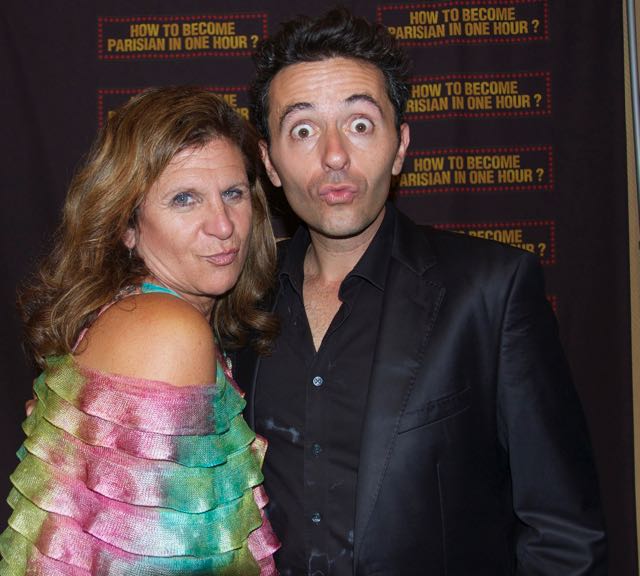 So what do the proud Parisian people think of this play?  I saw three beautifully coiffed women standing in the lobby and knew right away they were French.  “Are you Parisian?” I asked them.  The first woman smiled and said, “Oh, I live outside the periphic of Paris.  So I am not allowed to call myself Parisian.”  She laughed and seemed delighted about her situation. Her daughter smiled too and said in a very non-French accent, “I work in England and I think the English are very jealous of the French culture.  They want everything French style.”  The third woman who stood tall and had a face of a model, said she lived in Paris and even the shop personnel were rude to her in the shoe stores.  They all shrugged their shoulders.  “We want to laugh at our culture.”

What would Olivier Giraud do?  He pretends to sit on the Metro, his Parisian face looking downtrodden, serious, pissed off…the soft sound of FFF’s is blowing from his lips…he finds a point to stare at while riding the train looking at no one.  Suddenly an old woman on the train smiles at him.  He looks at the audience and says, “She’s not nice.  She just wants my seat.  I smile back at her which means in Parisian talk:  No way lady am I giving you my seat.”

Us Americans need to know these things if we expect to survive in the City of Love, the City of Romance.  Go see “How to Become Parisian in One Hour” if you find yourself in Paris and want to laugh.  Or how it is said in French: rire, sourire; amusement; moquerie.

Of course, their language is superior!

To find out more information go to: http://www.oliviergiraud.com/theatre.html

Supermodel: Erika Linder Star of BELOW HER MOUTH @ErikaLinder