I admit it.  I lived in Orange County for 25 years.   This was the last place I ever thought of inhabiting when I first moved to Los Angeles back in 1979; however, I did reside there longer than anywhere else.  Guess what?  Many talented musicians live there too. 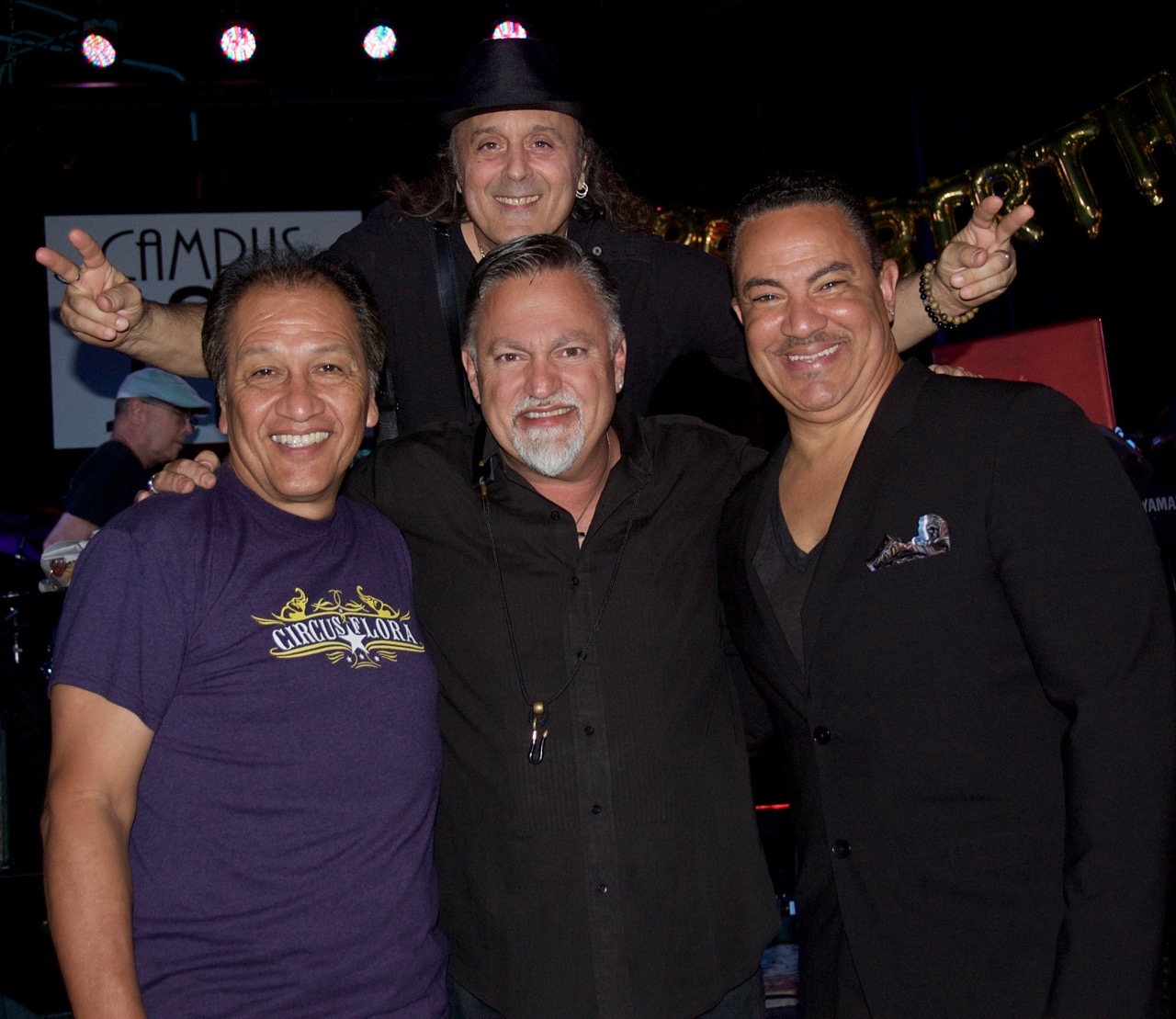 Last night, October 29th, about twenty gifted players and vocalists hailed Mr. Greg Vail, smooth jazz, and funk sax musician, for his 55th birthday.  From 4 pm in the evening until  8 pm,  saxophonist extraordinaire, Greg Vail held his Annual Birthday Jam at Campus JAX, in Newport Beach. While the planes from the John Wayne Airport zoomed overhead, Greg and his sizzling hot musician friends zoomed around the stage kicking the night into high gear. In his indomitable raucous style, Greg Vail galavanted on his many saxes with his stunning chops.  The room rocked and swung with songs from diverse genres.  Greg and his wife, Michelle hosted the jam with verve and graciousness as they welcomed all his friends and family to celebrate. 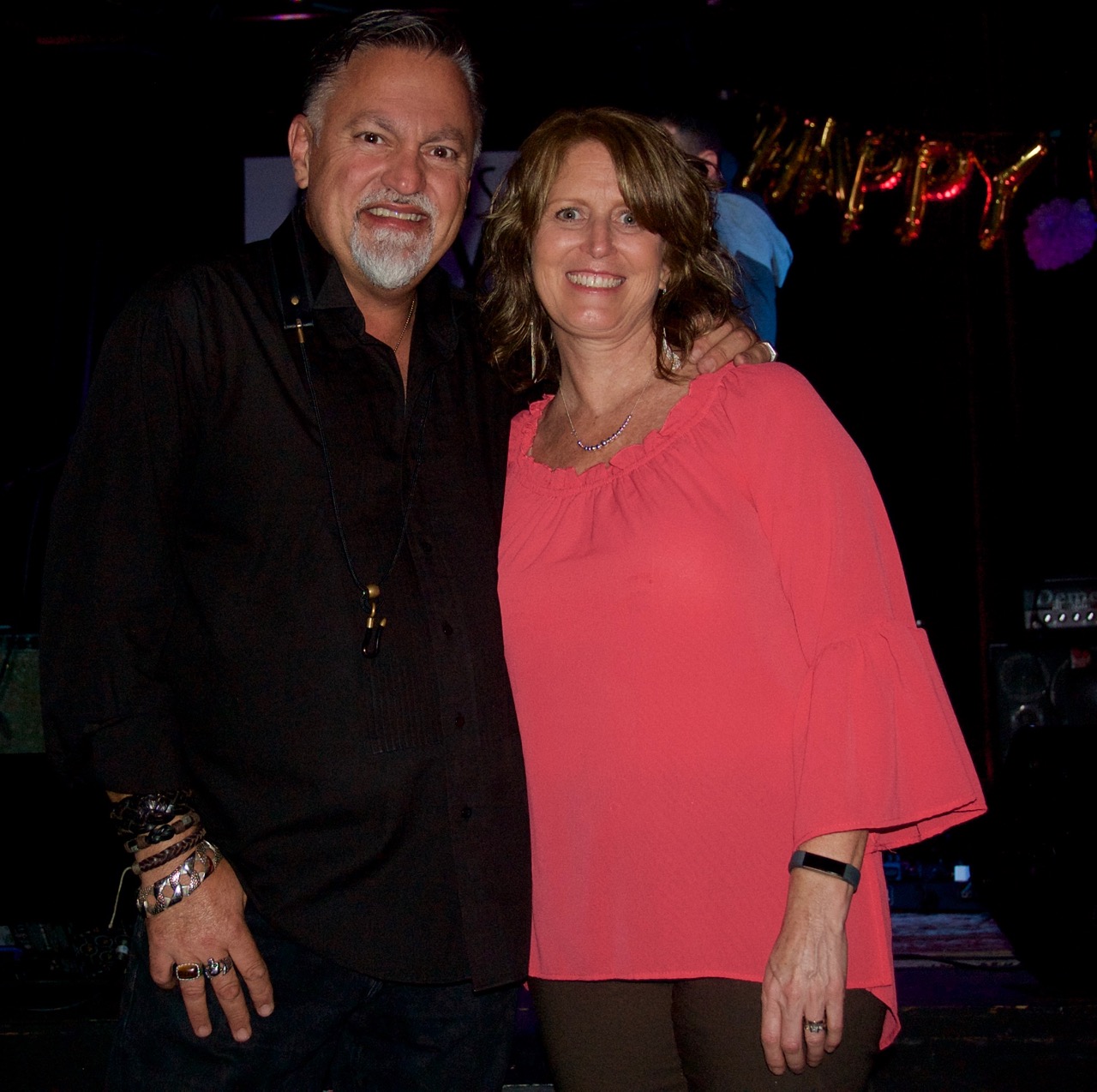 “I am honored to say, my birthday falls on the same day as Adolphe Sax’s, “ (the inventor of the saxophone) Greg informed the audience.  “I finally realized this in my third year of sax ensemble in college when a friend congratulated me for being born on the same day as this infamous musician.”

Although this was a special occasion, Greg has been organizing these jam sessions for 10 years around the OC.   Many musicians settle here, wanting to get away from the maddening traffic and crowded lifestyle of Los Angeles and want to have a place where they can display their talent, as well as perform with their buddies who they rarely get to see. 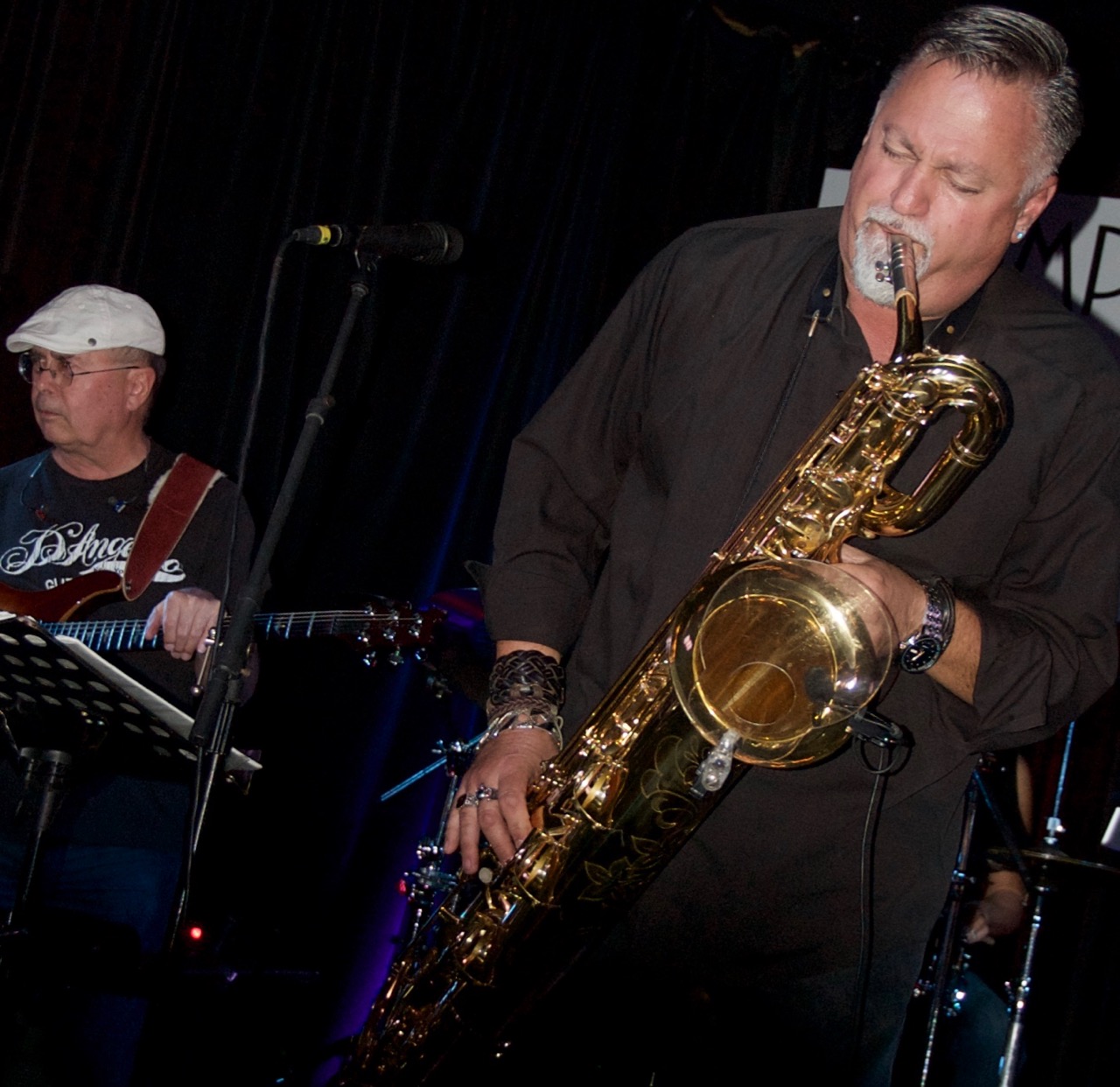 Greg Vail has been playing professionally in the Orange County area for close to thirty years.   He has been a regular and a favorite at the Annual KSBR’s Birthday Bash.  This musician is also an integral part of Greg Adam’s East Bay Soul.

Last night, when Greg brought out his huge baritone sax to perform “Europa” there was no doubt his delivery of the song would be bold and spirited. The passionate roaring riffs of Greg’s blowing oozed with intensity.  His delivery was fluid and gutsy.  It gave me goosebumps. 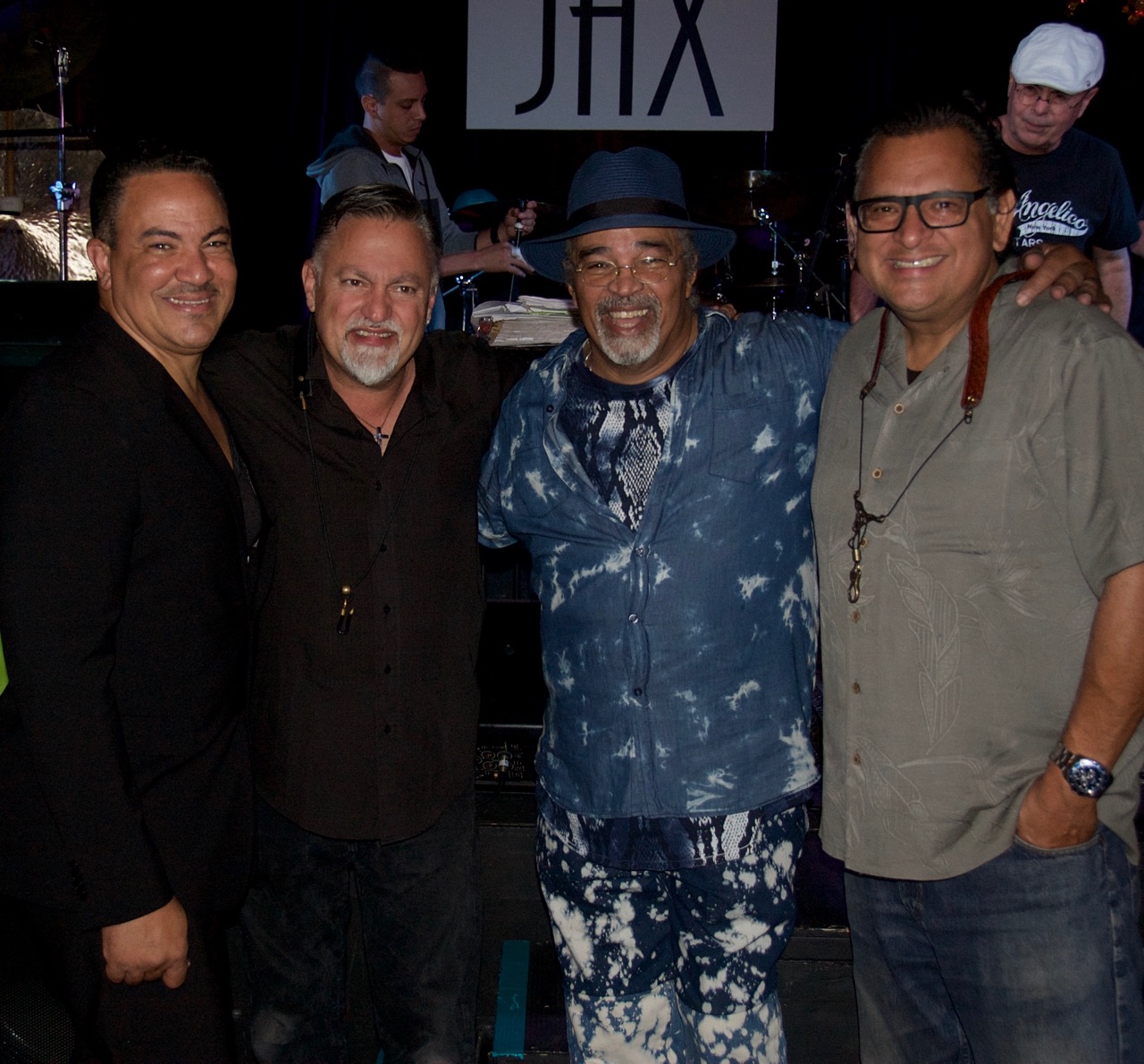 There were standout performances from guest artists like the sonorous and savory chops of vocalist, Darryl Fitzgerald Walker, (he & Greg play in East Bay Soul ).  Darryl’s renditions of  “What I Would Do For Love” and “Let’s Stay Together” were smothered with his sexy flavorful voicings.  Greg rendered his superb soloing on these two songs.  The cool, shredding licks of Anthony Terrezza,  who also rocked the vocals, added his fiery colors to the music that evening.  My dear friend, Victor Robles, poured out some deep-seated proficient riffs on the sax when he joined the stage with the other multi-talented sax men.  Every musician onstage shined brightly as they helped Greg Vail celebrate his Birthday Jam. 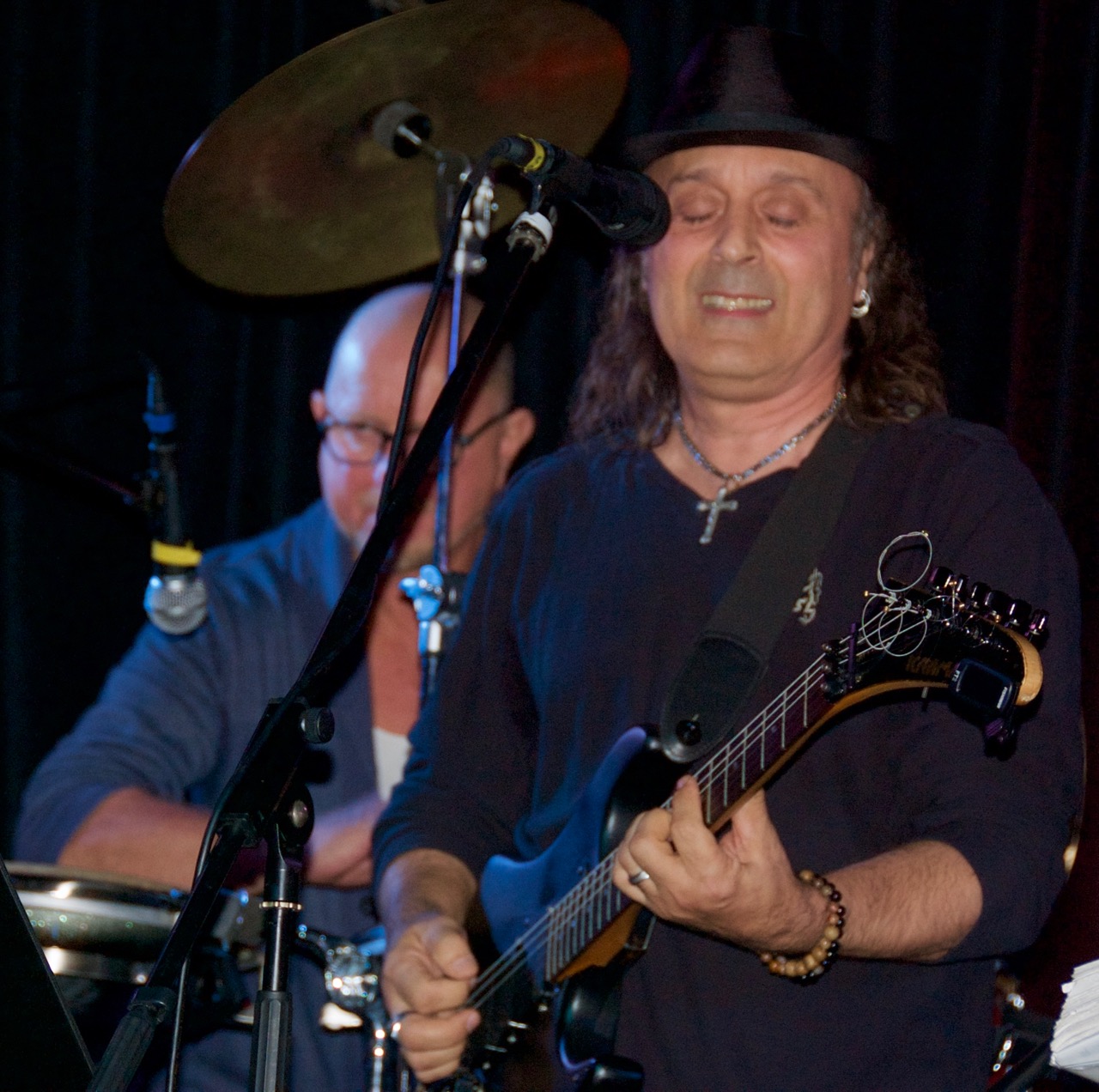 All night long, Greg’s sax screamed with high notes that hit the stratosphere of intensity as his fingers flew up and down the keys.

Anthony Terrezza, guitar player/ singer, and a friend of Greg’s since the 1990’s, who has worked as a studio musician in Nashville and Los Angeles playing jazz, rock, funk, country and R&B, said, “Greg’s sax playing is fluid, yet he hits his notes with accuracy and a feeling of soulfulness.” 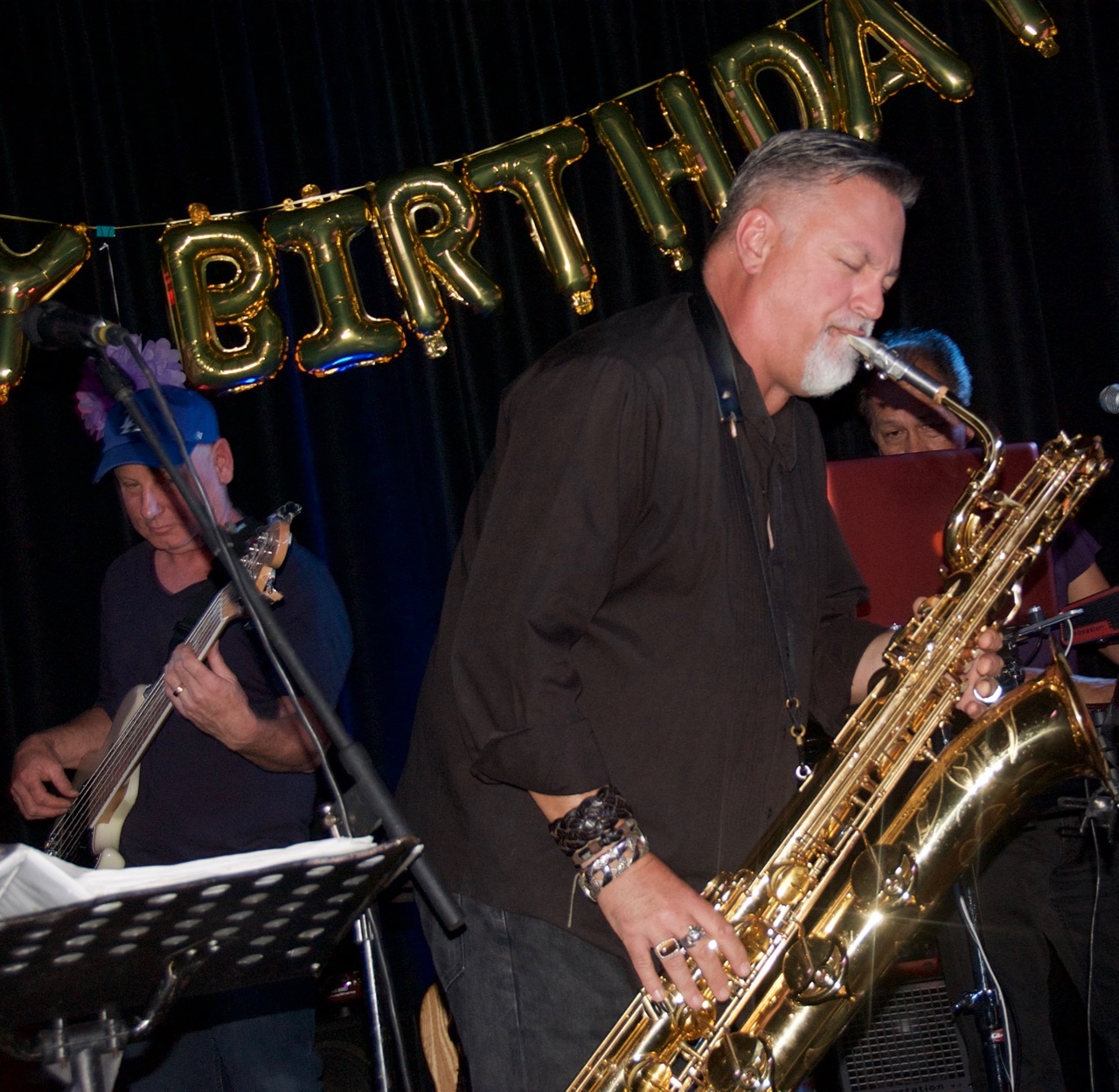 Greg Vail had commented to me before about why he calls his jams Pro Jams:

“The name Pro was used deliberately because Greg wanted to keep the value of the music at an elevated level.  He invites musicians who are experienced players to join the stage.  “I was told by a friend to dumb down the playing so everyone could participate and not feel intimidated by the high-performance level.  But I didn’t want to do this.  I wanted the people who came out to listen, to have an experience of the highest quality.” 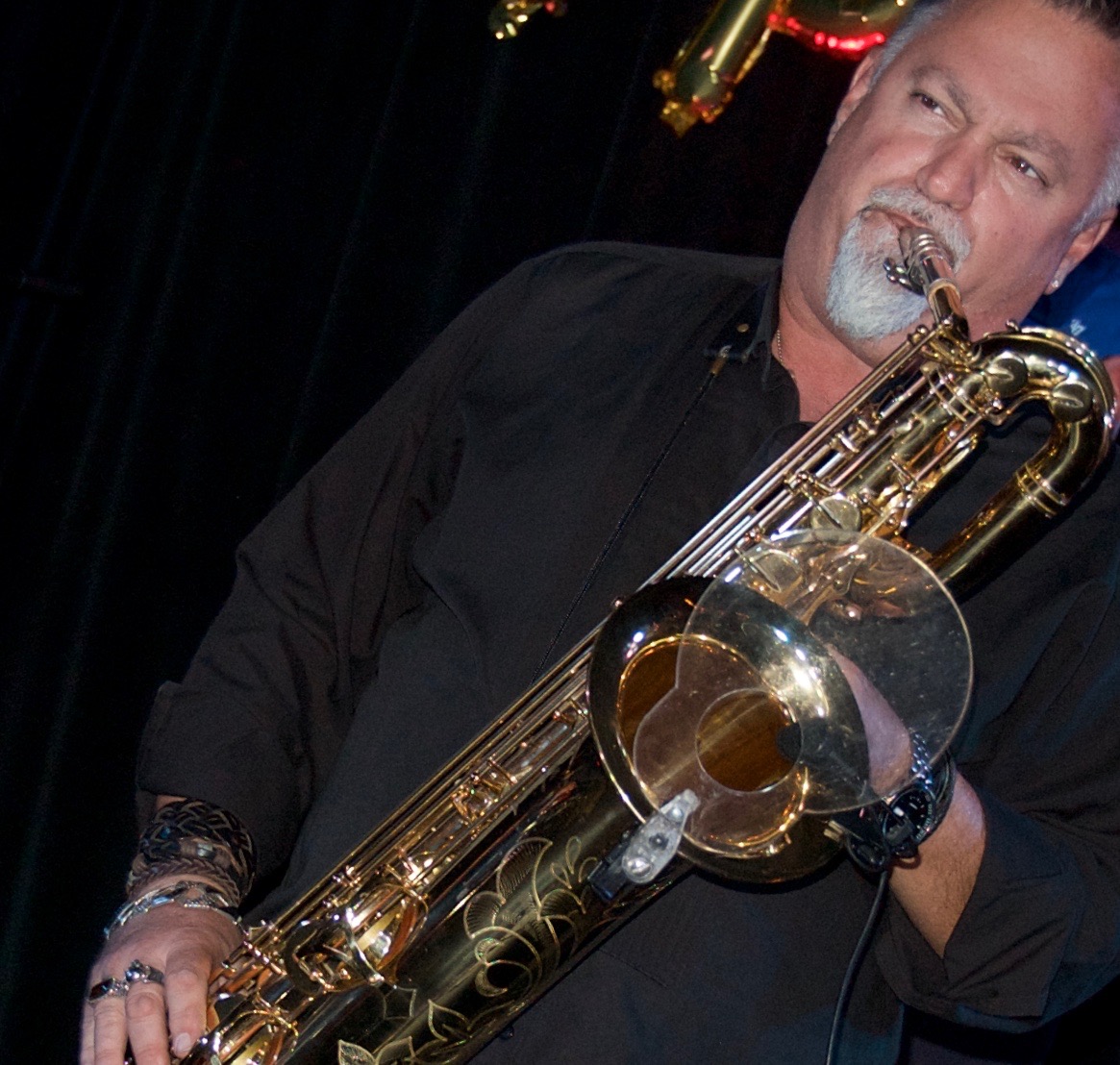 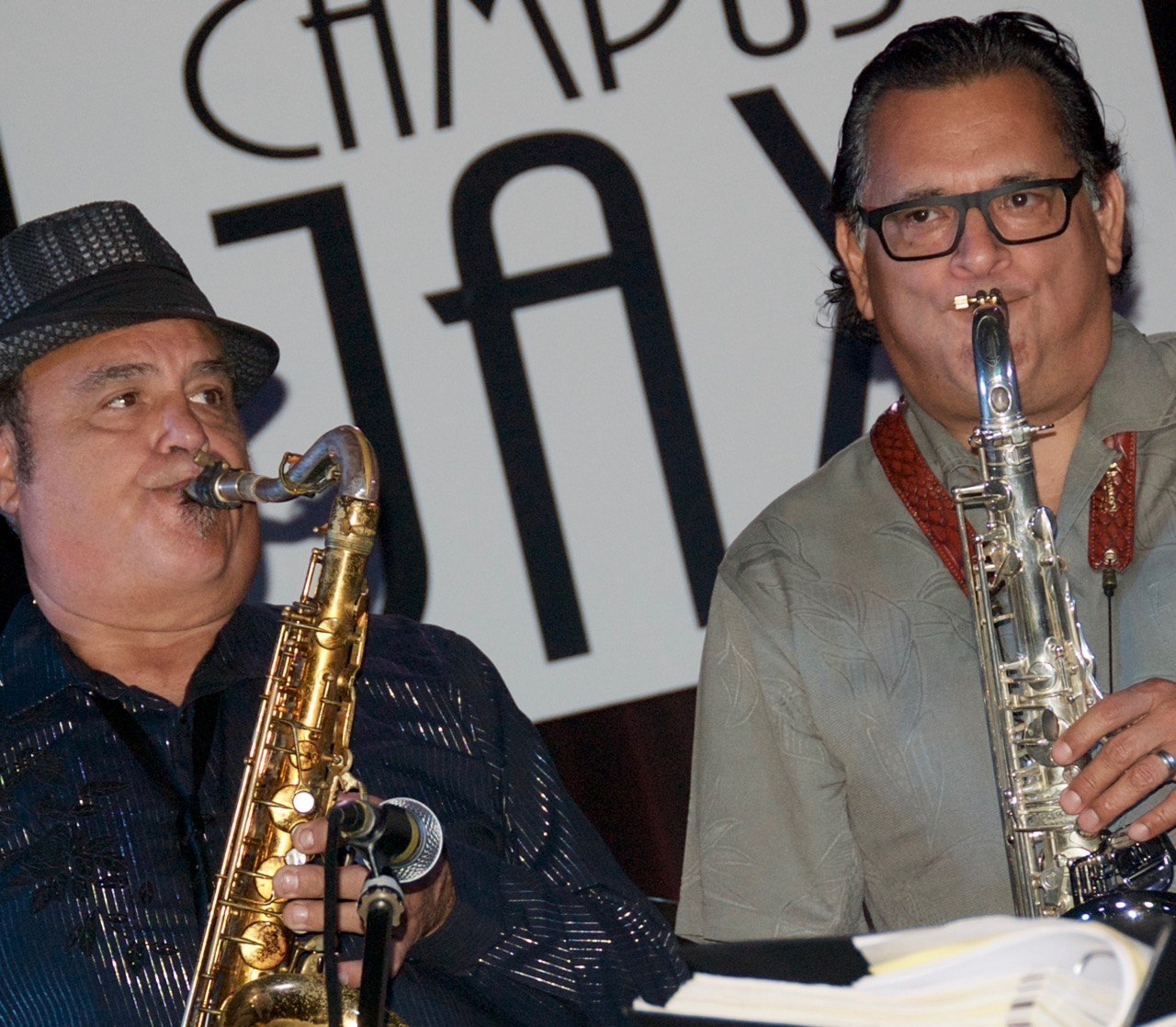 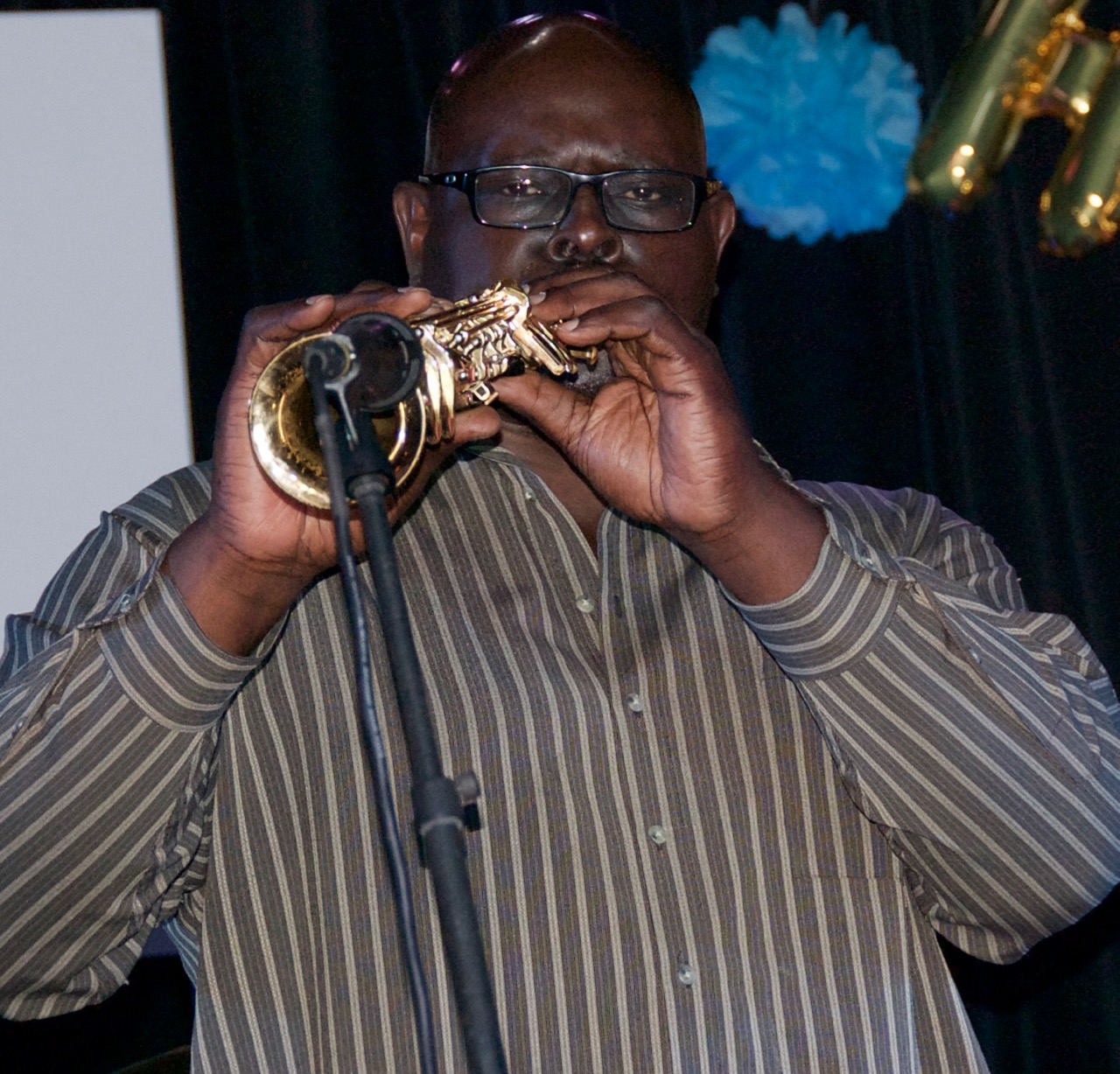 When attending the Pro Jam Sessions, the audience is offered a “buffet of music” as the sax player liked to call it.  The menu consists of a diversity of styles: Classic Rock, Reggae, Dixieland, Standard Jazz and Smooth Jazz, and R&B. 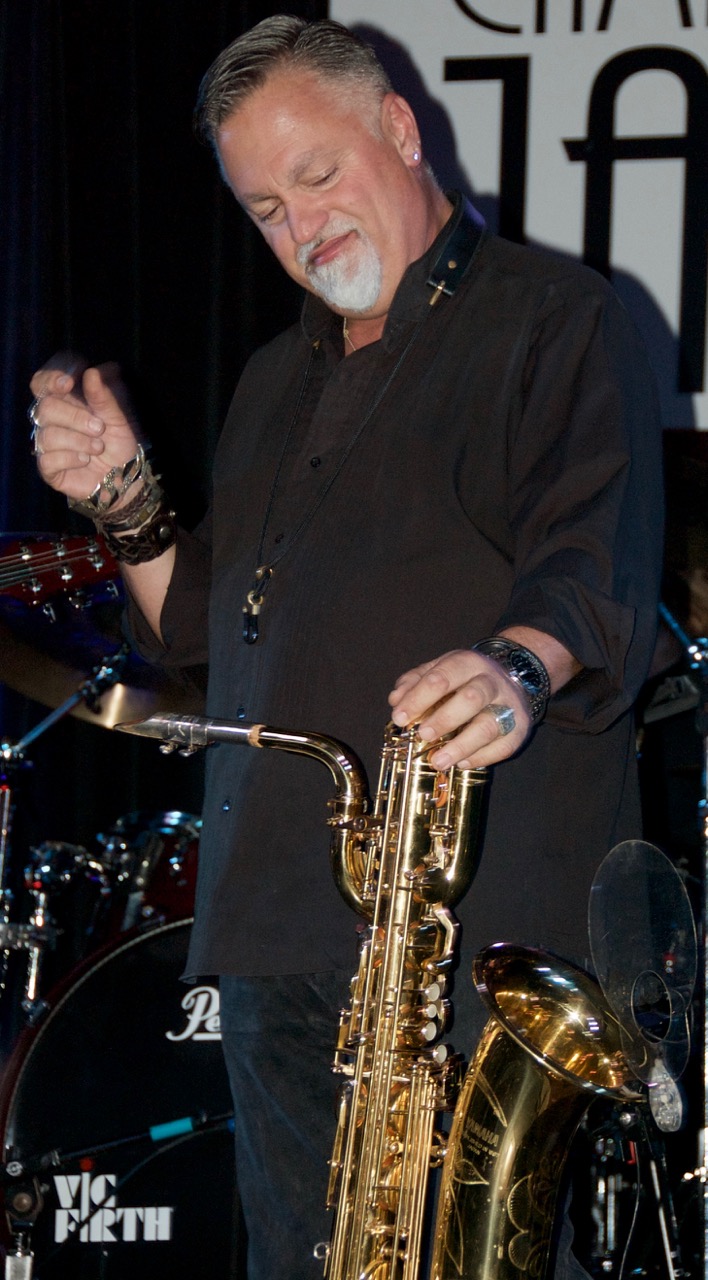 Greg’s repertoire of saxes is always impressive as each one stood to wait for its turn.  He owns a soprano, alto, tenor and baritone sax, plus a flute.  All his instruments are from Yamaha, but there was one that countered all of them: a white lacquered sax with gold keys.  This instrument gleamed with star power.  “Yamaha only produced fifty of them. I was very fortunate and demonstrated this newest model at the NAMM Show in 2011.  After I played it, I had to have one.”

The next Pro Jam Session will probably strike Orange County again in December or January 2018.   “There are few opportunities to play in Orange County.  Most musicians on a Sunday do not want to stay home and watch television.  They would rather be on stage displaying their talents and enjoying each other’s playing,” Greg said. 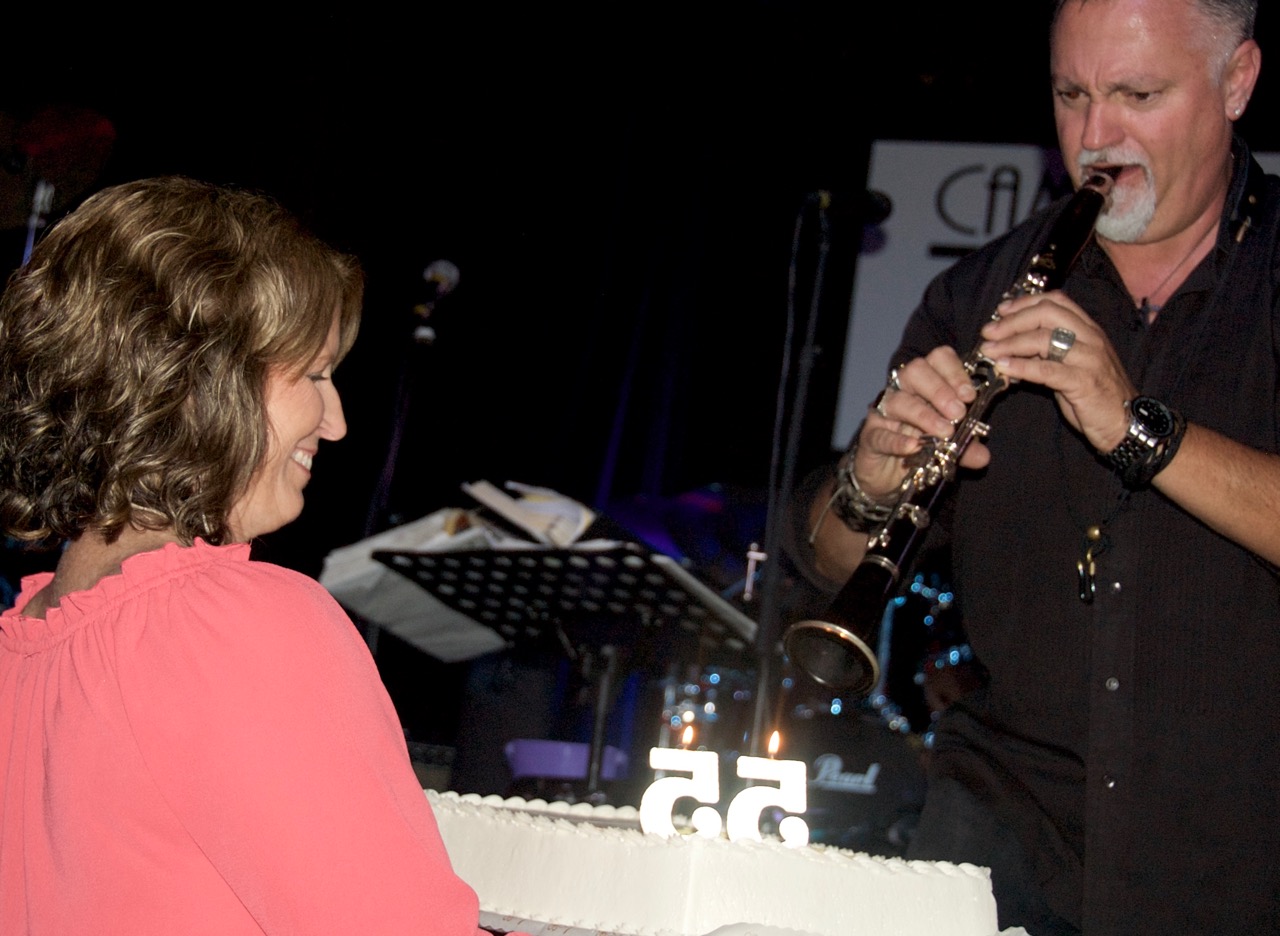 For more information regarding Greg Vail, go to : http://www.gregvail.com/