The second day of the Long Beach Jazz Festival was kicked off by the very classy act, Jazz in Pink. All of these female musicians dominated the airwaves with a high voltage of improvisational chops while decorating the stage with their fashionable outfits that boasted pink. 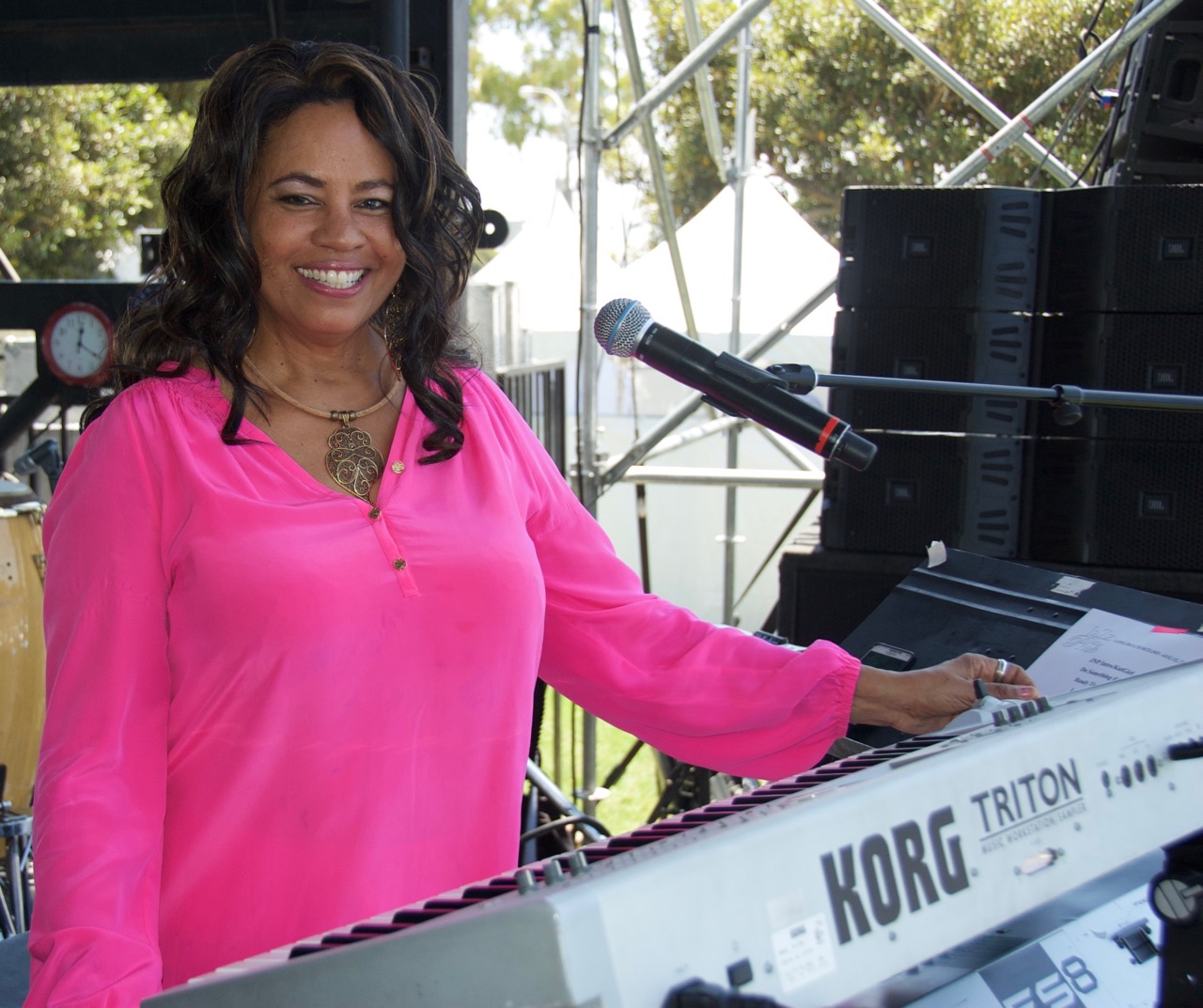 Gail Jhonson told me how the group Jazz in Pink was formed. ” I was on a Smooth Jazz Cruise playing with Norman Brown. I went to one of the shows and saw Althea Rene, flutist. I asked myself, ‘Where have you been?’ She was the flutist for the group Straight Ahead. She wanted to do more than just playing straight ahead jazz. So I invited her to lunch to talk about how we might collaborate and help each other’s career. That was 2008. In 2018, we will be celebrating 10 years of “Jazz In Pink” being together.” 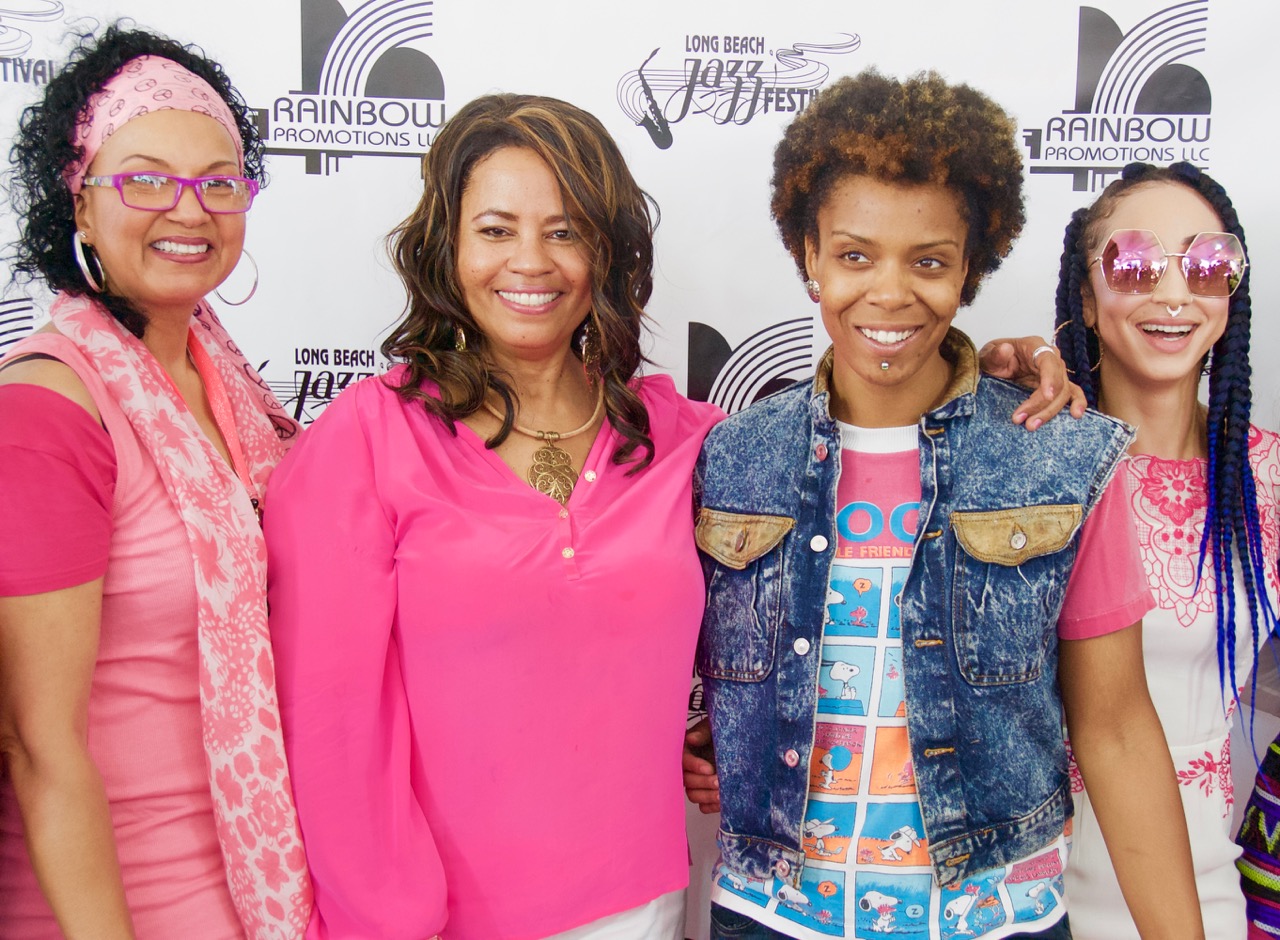 Gail Jhonson talked about the groups’ mission statement. “We play more than just jazz. We play World Music, Funk, Gospel and Jazz. It’s a fusion of all these different styles. “Jazz in Pink” come to the stage with energy and fire, beauty and grace. All the musicians are really serious about what they do, but yet able to have fun on stage, and show your beauty and your talent. Our mission statement is we hit the stage with beauty, grace, and passion.” 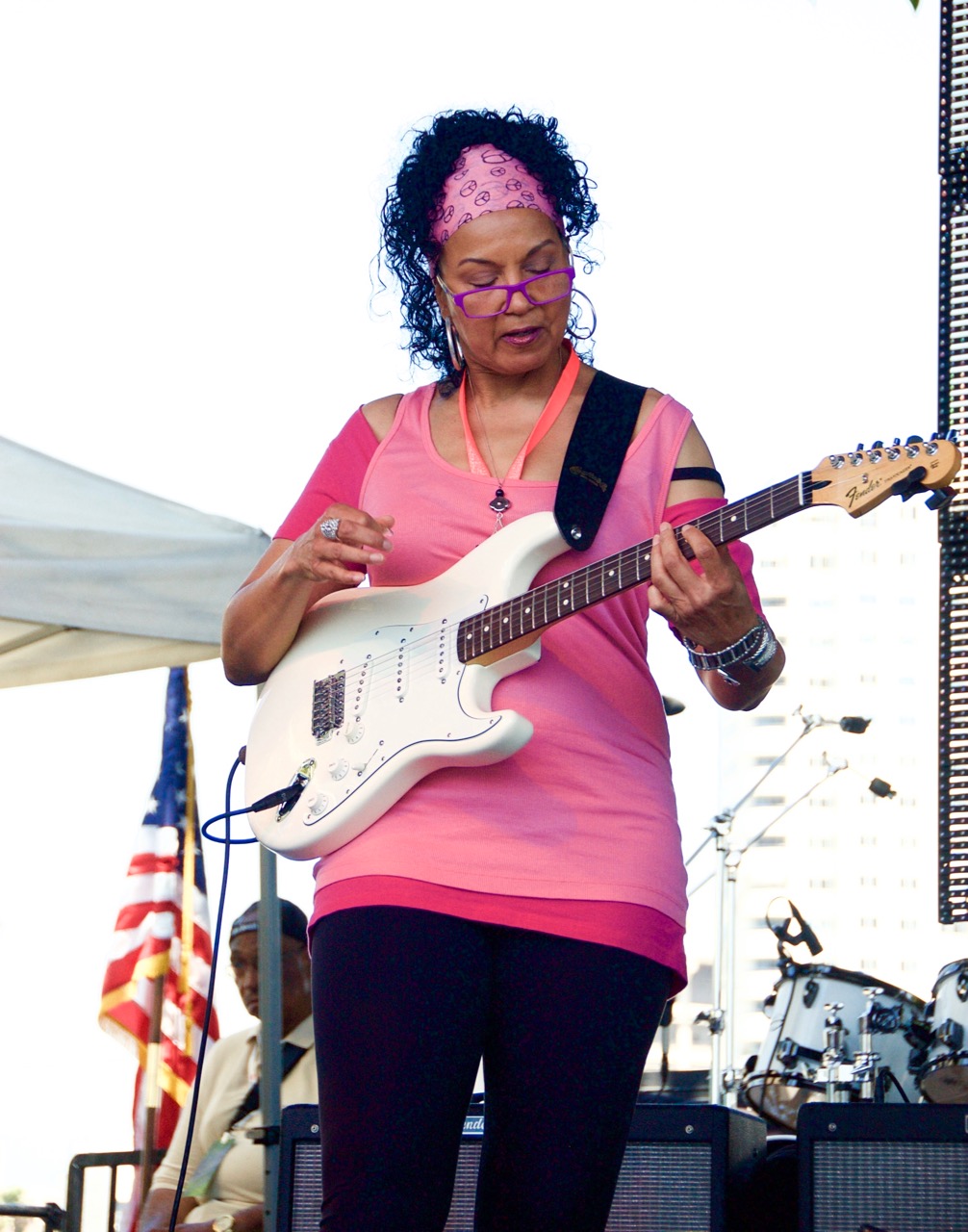 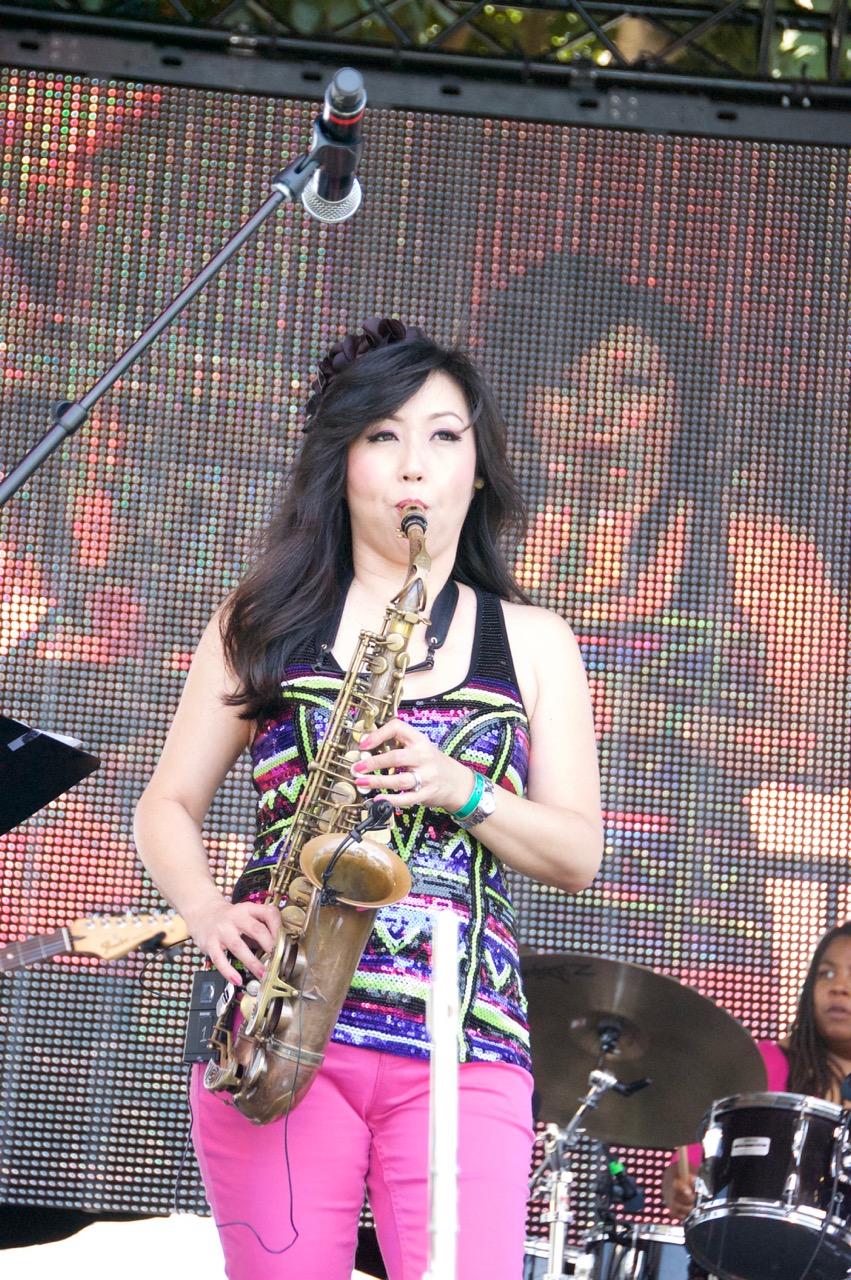 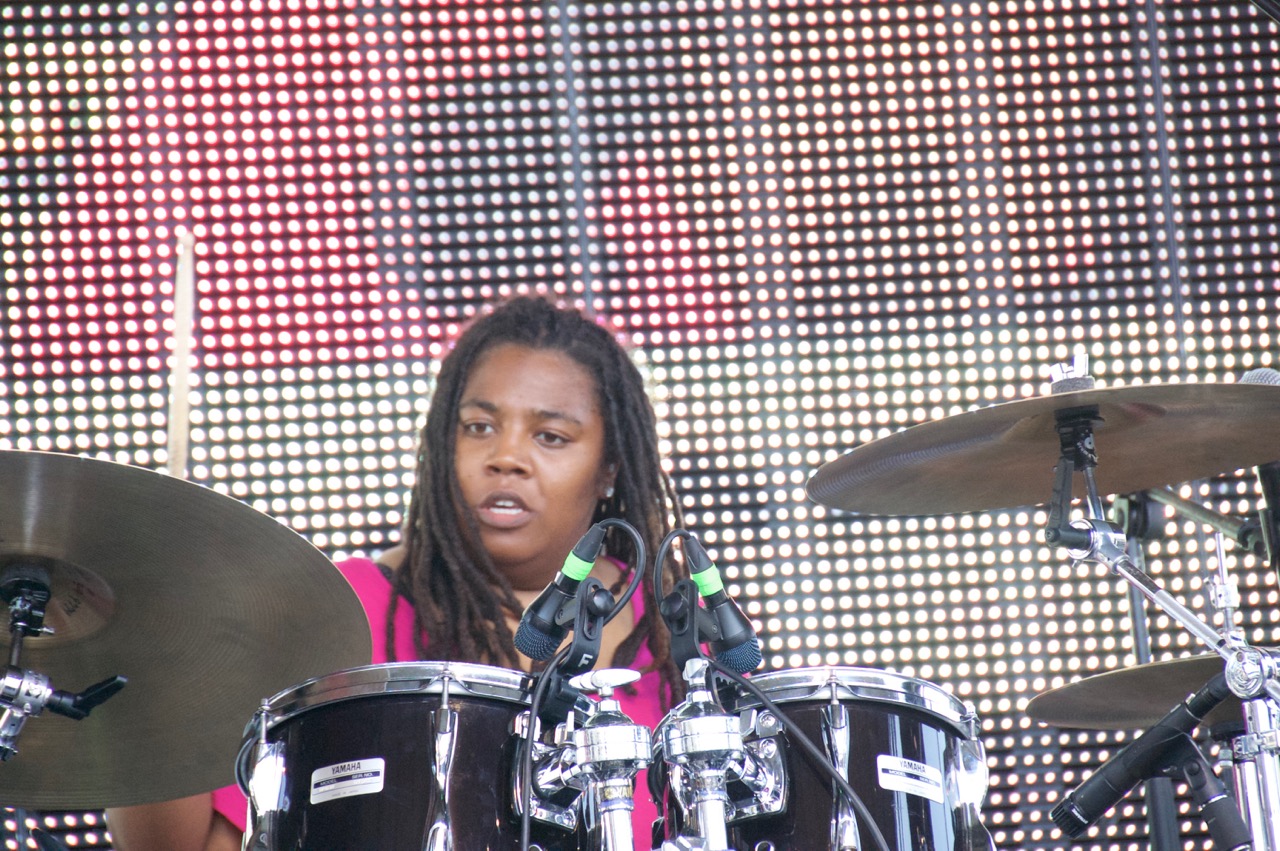 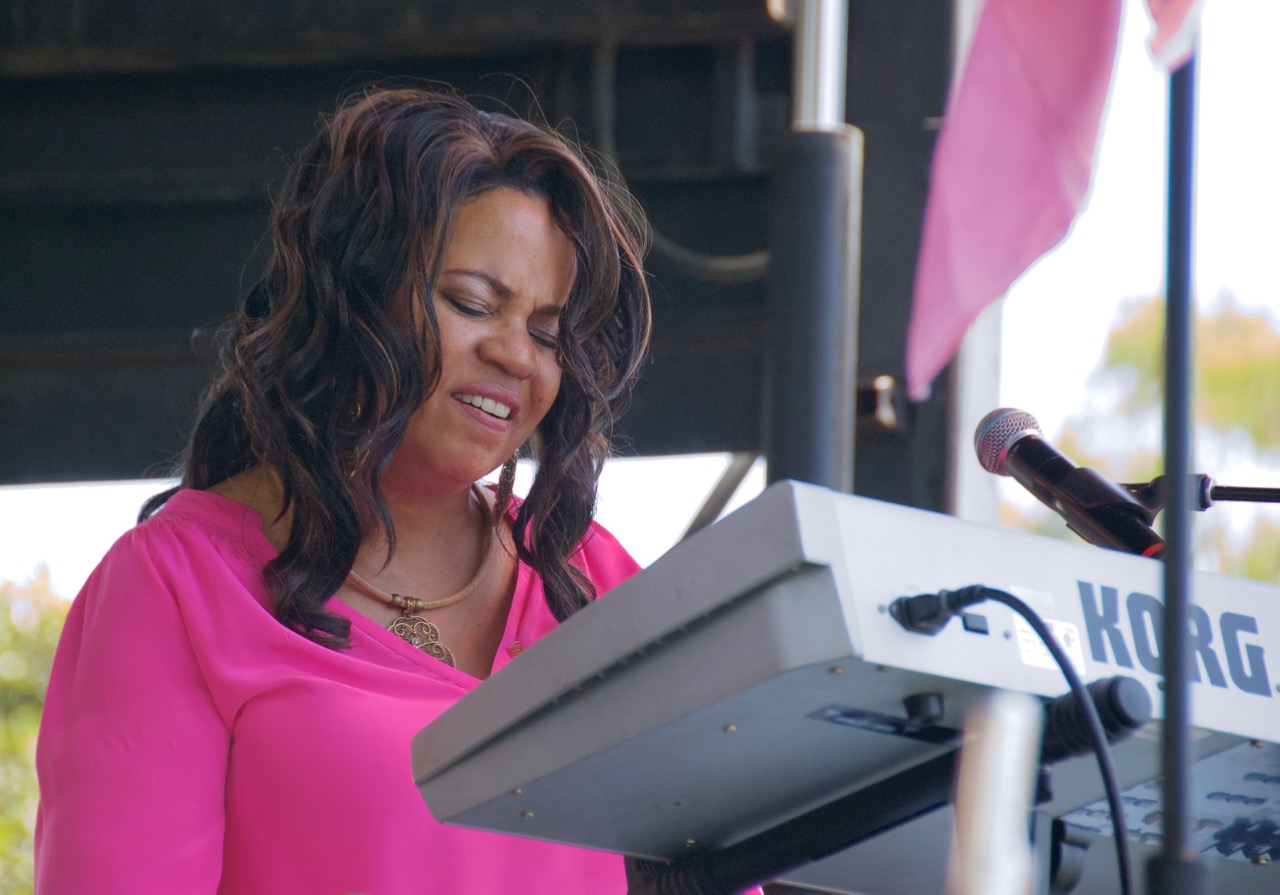 The ladies of Jazz in Pink did just that for the one hour set. Each musician got to solo many times throughout the performance displaying their superb skillful technique. The group did a lovely tribute to Natalie Cole featuring Lynne Fiddmont on vocals. This songbird’s ability to scat and deliver a crushing range of style lifted everyone’s spirits. 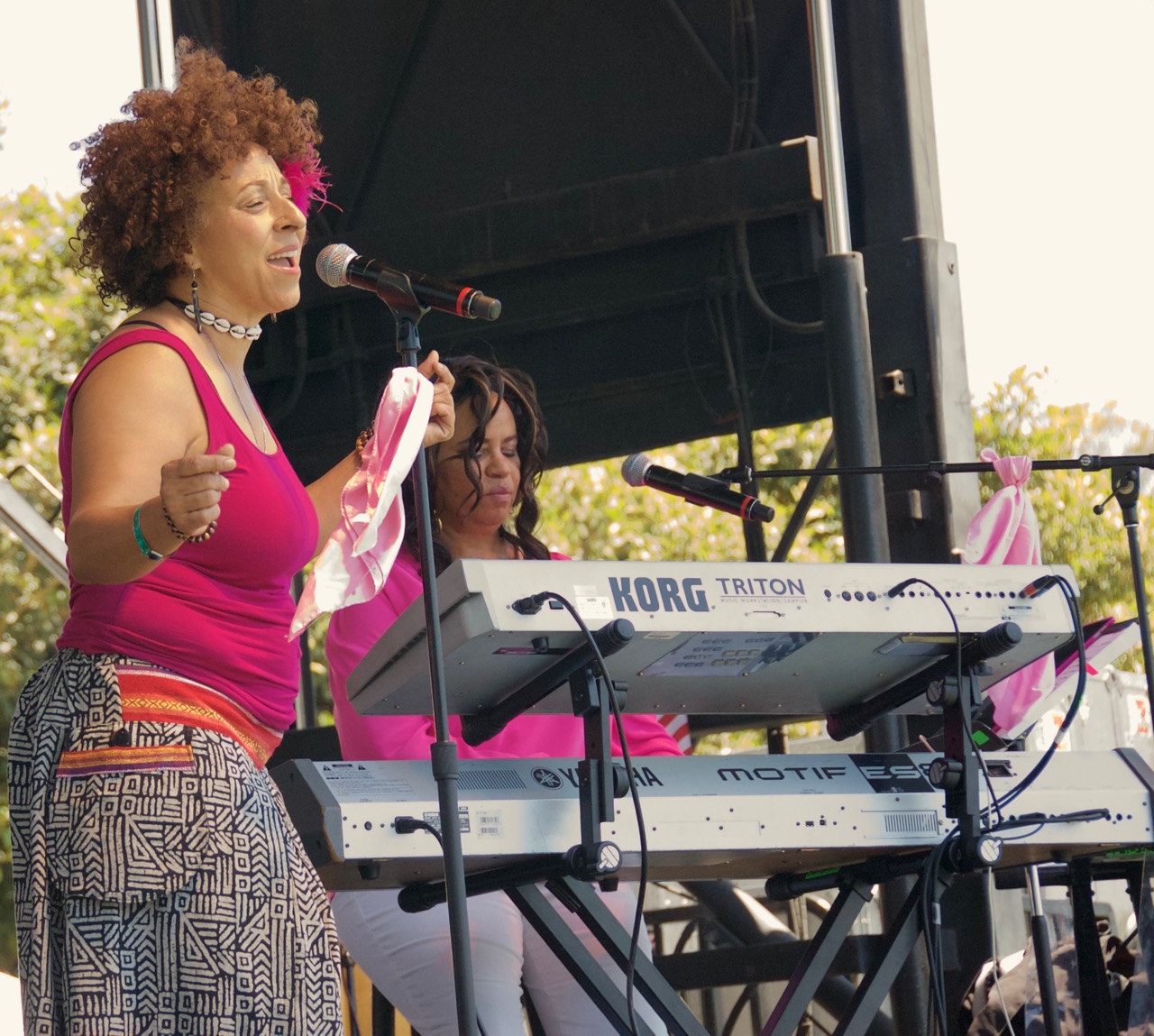 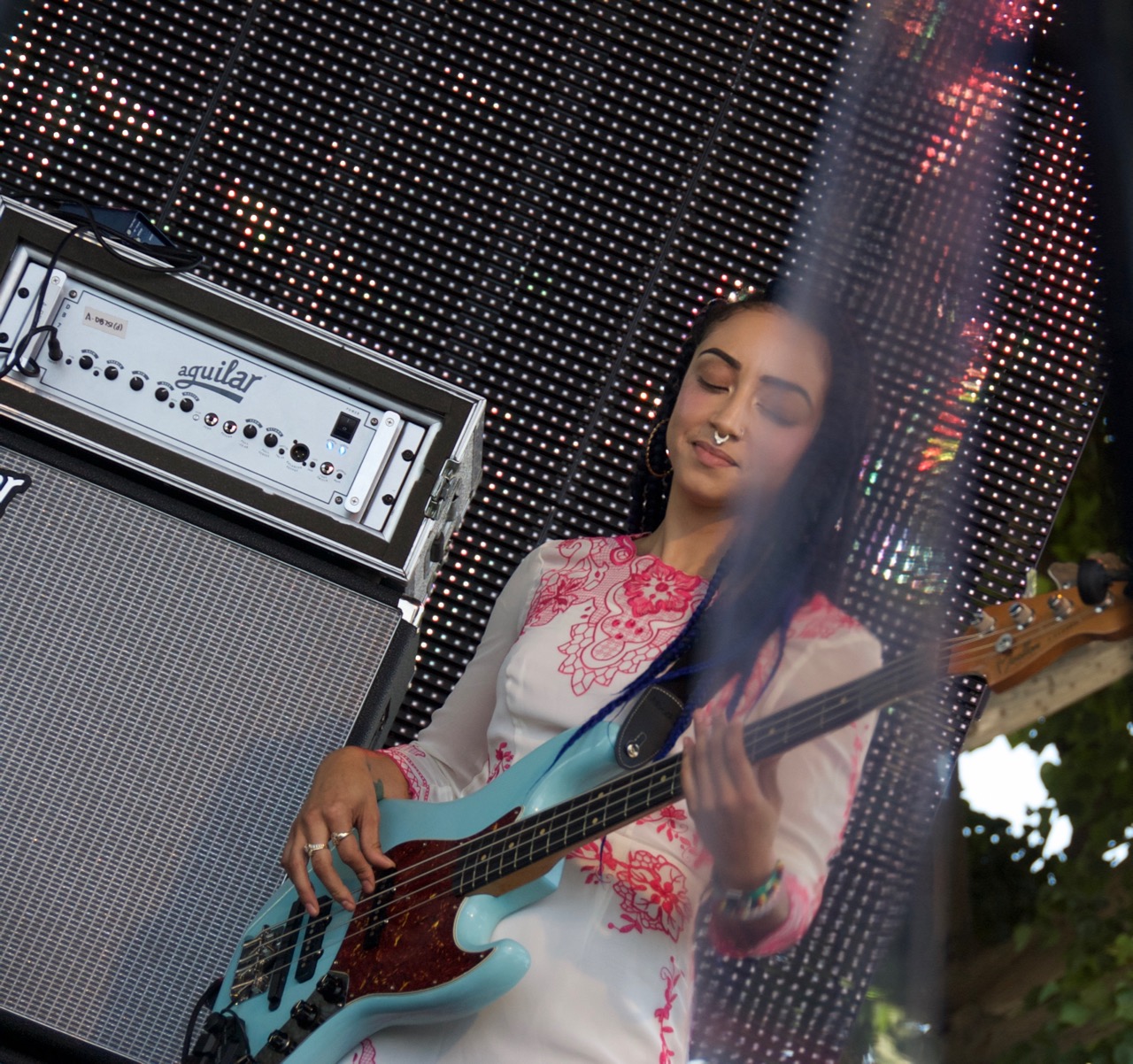 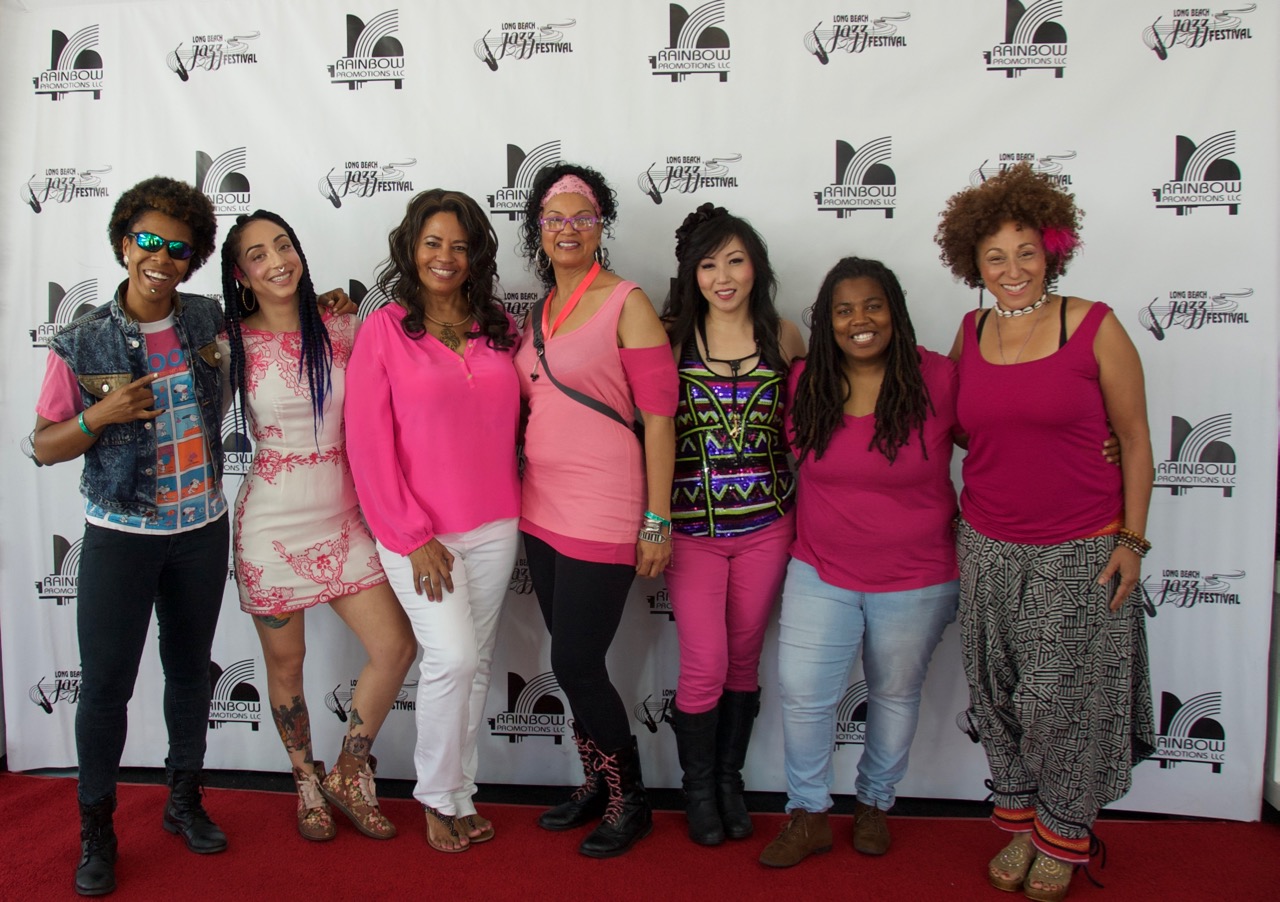 As Gail Jhonson loves to say about her very talented musicians, “This is a Pink Experience.” 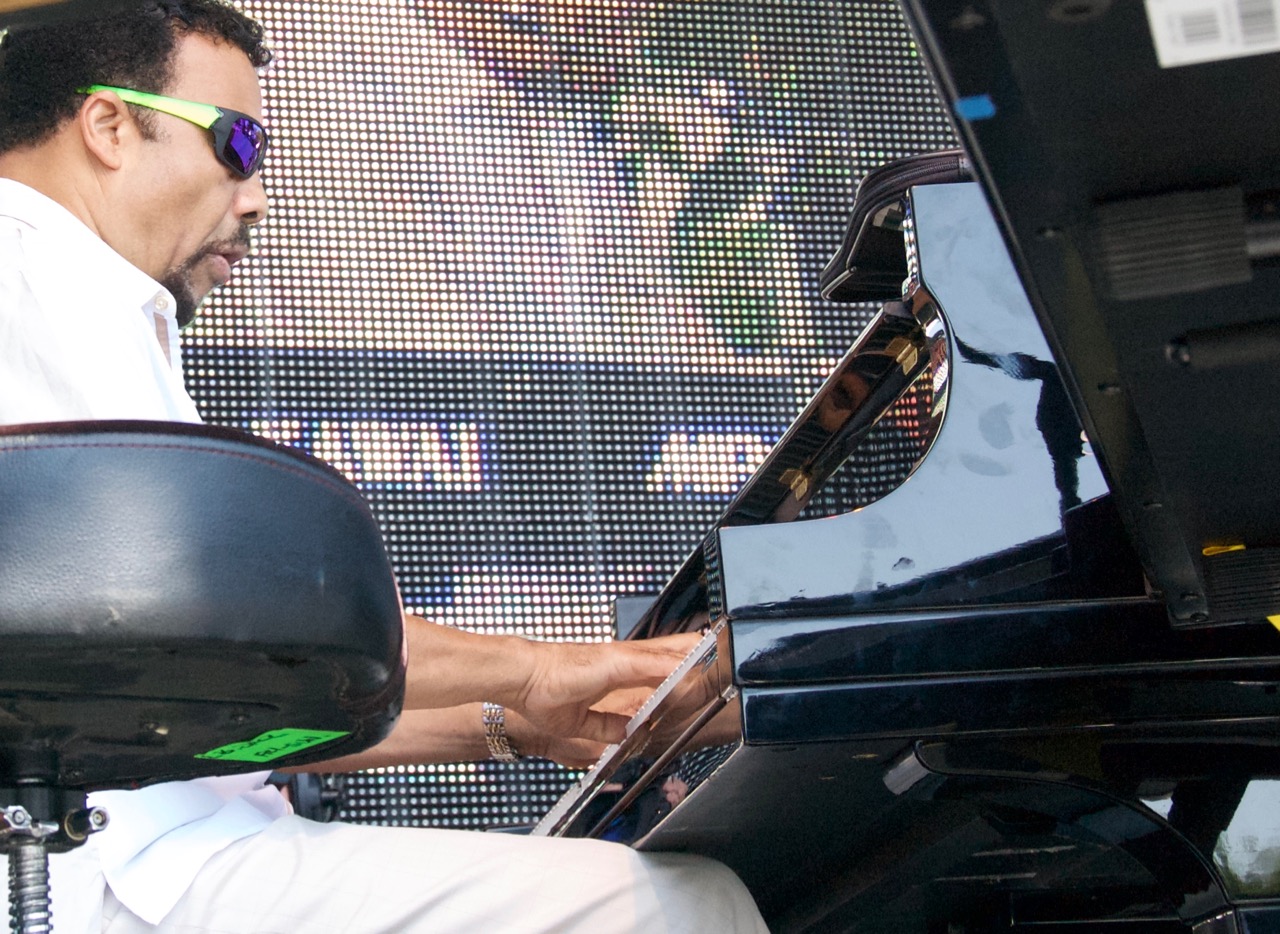 Next up on the Main Stage were the veteran musicians of Ndugu Chancler, drummer, Bobby Lyle, keys, Alphonso Johnson, bass and Craig T. Copper, guitar.  They were joined later by the vocalists, Bridgette Bryant, Will Wheaton and Sangindiva Shannon plus other backup singers.

This hour of music energized the audience with the strong, heavy chops of Chancler, Lyle, Johnson and Cooper.  Each one of these musicians have been at their craft for over 30 years.  Ndugu Chancler has played with Miles Davis, Frank Sinatra, Herbie Hancock, and Weather Report.  He has Gold and Platinum albums as well as Grammy Awards.  On the drums that afternoon, he roared with superlative rhythm. Alphonso Johnson has played with Weather Report, Sergio Mendes, the Grateful Dead and now teaches at Cal Arts and USC.  His bass playing flowed and bounced with graceful plucking.  Craig T. Cooper on guitar has played with Barry Manilow, The O’Jays and the Crusaders.  He brandished the guitar strings with flavorful soulful chops.  Bobby Lyle on keys has played and was the musical director for Bette Midler, Al Jarreau, George Benson.  He set the pace of a Olympian marathon runner on the keys with his brawny playing. 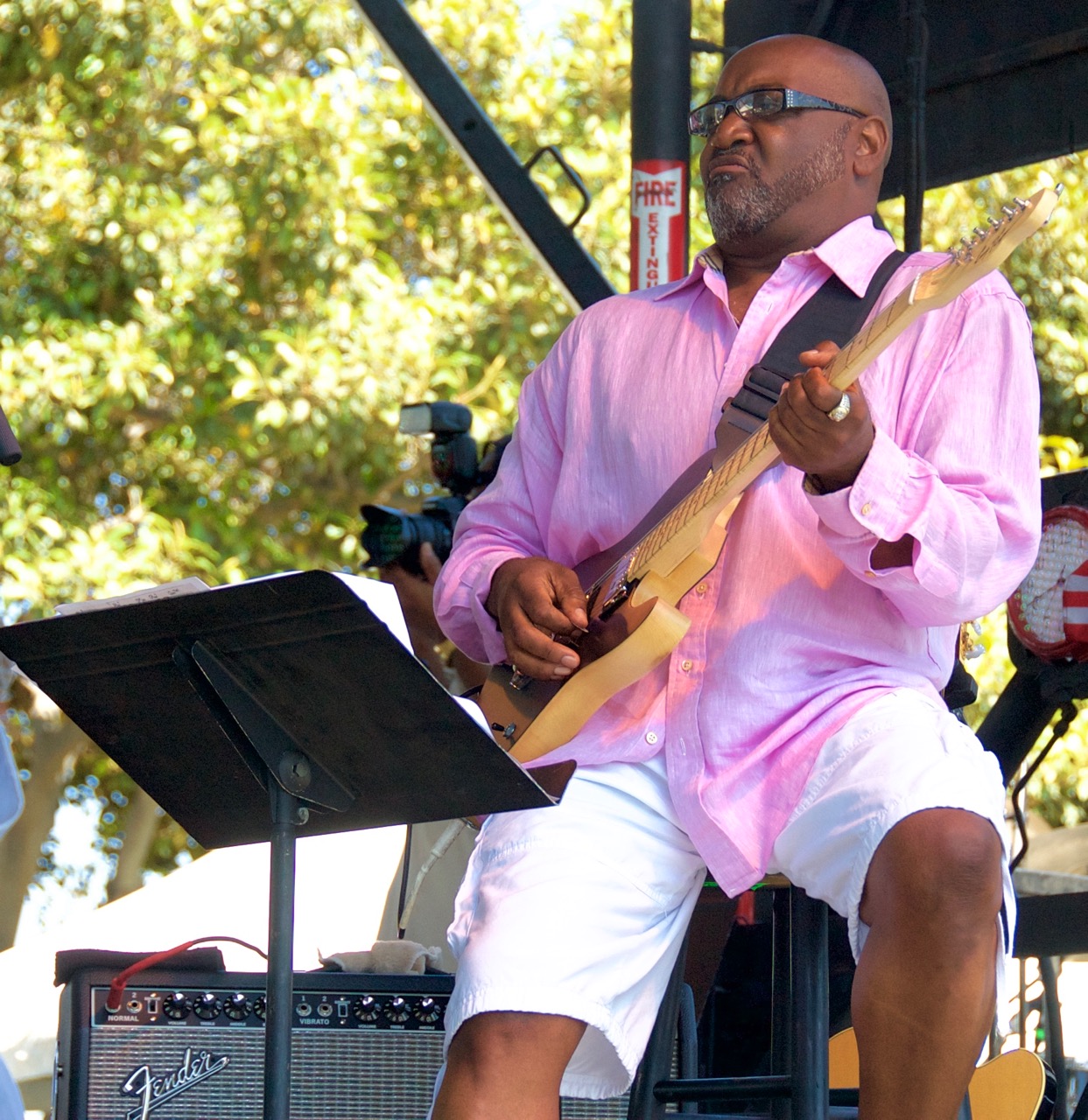 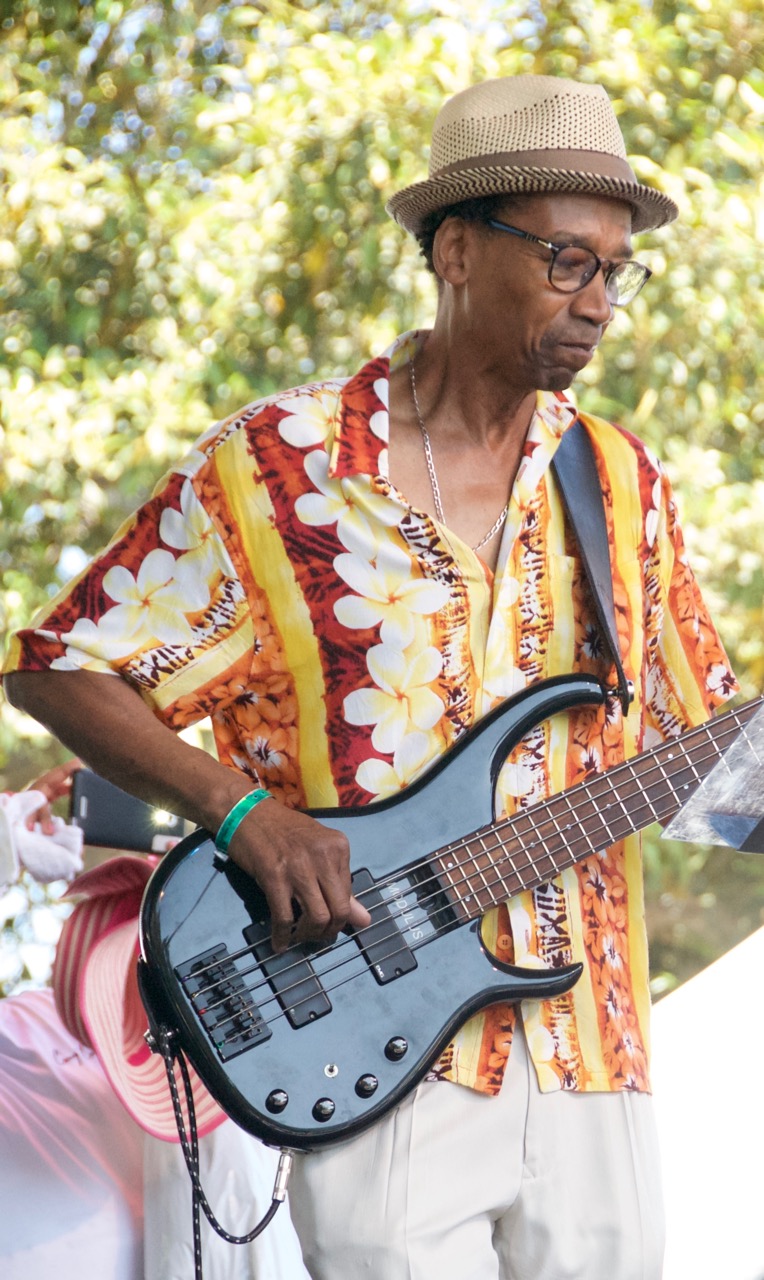 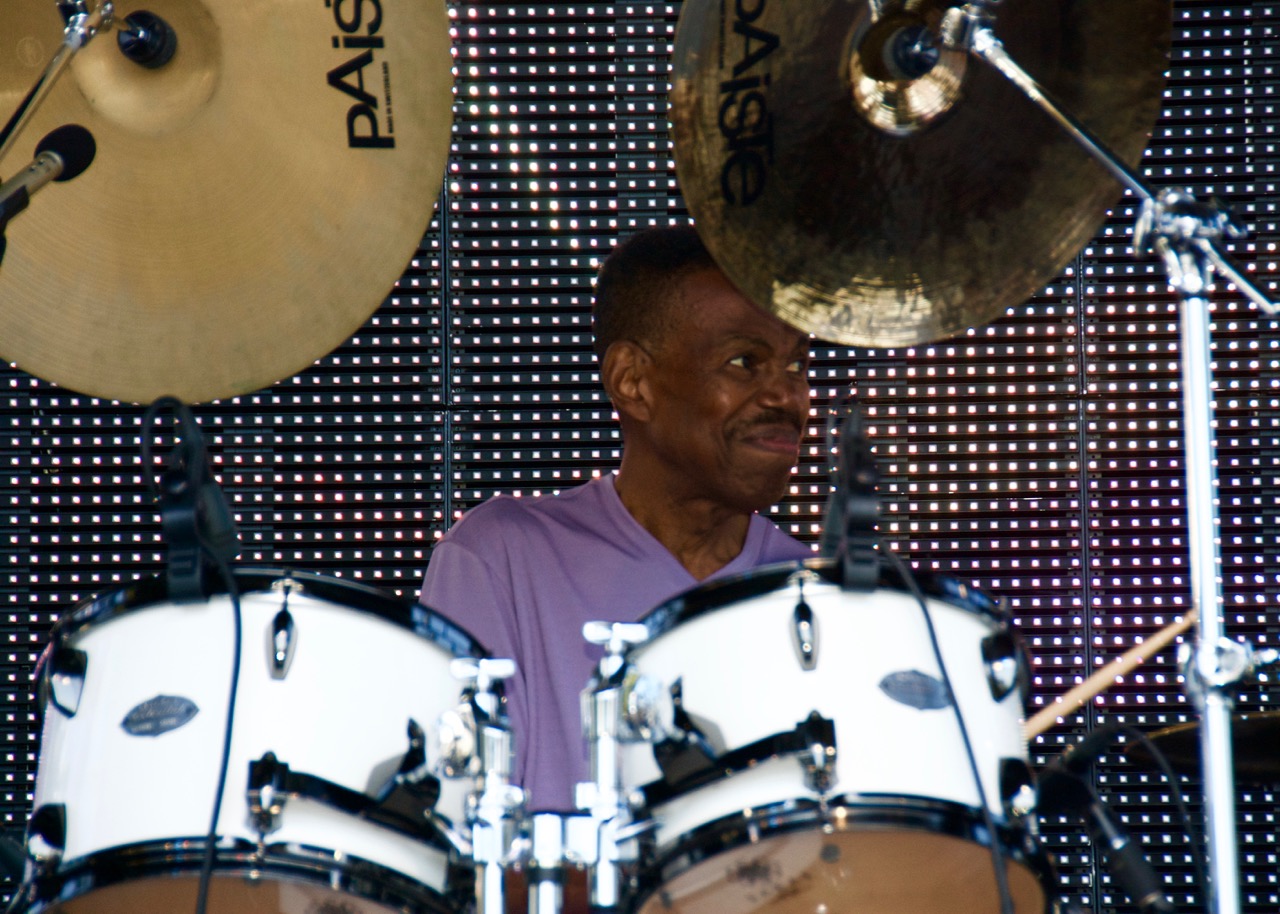 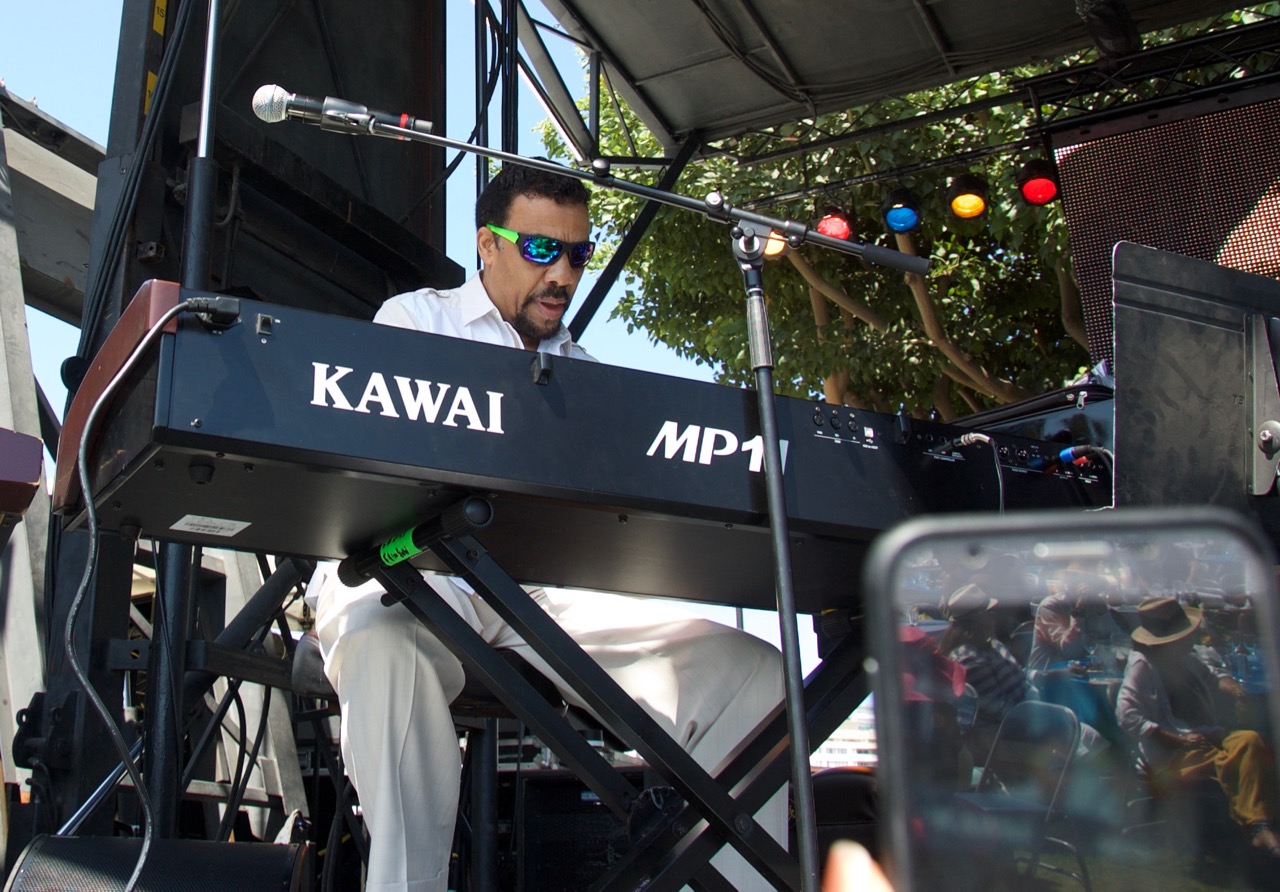 In my Facebook Live interview with Bobby Lyle he commented about performing with these musicians, “It’s just a great energizing, inspirational feeling when you get good musicians playing together for a common cause.  The feeling is indescribable.” 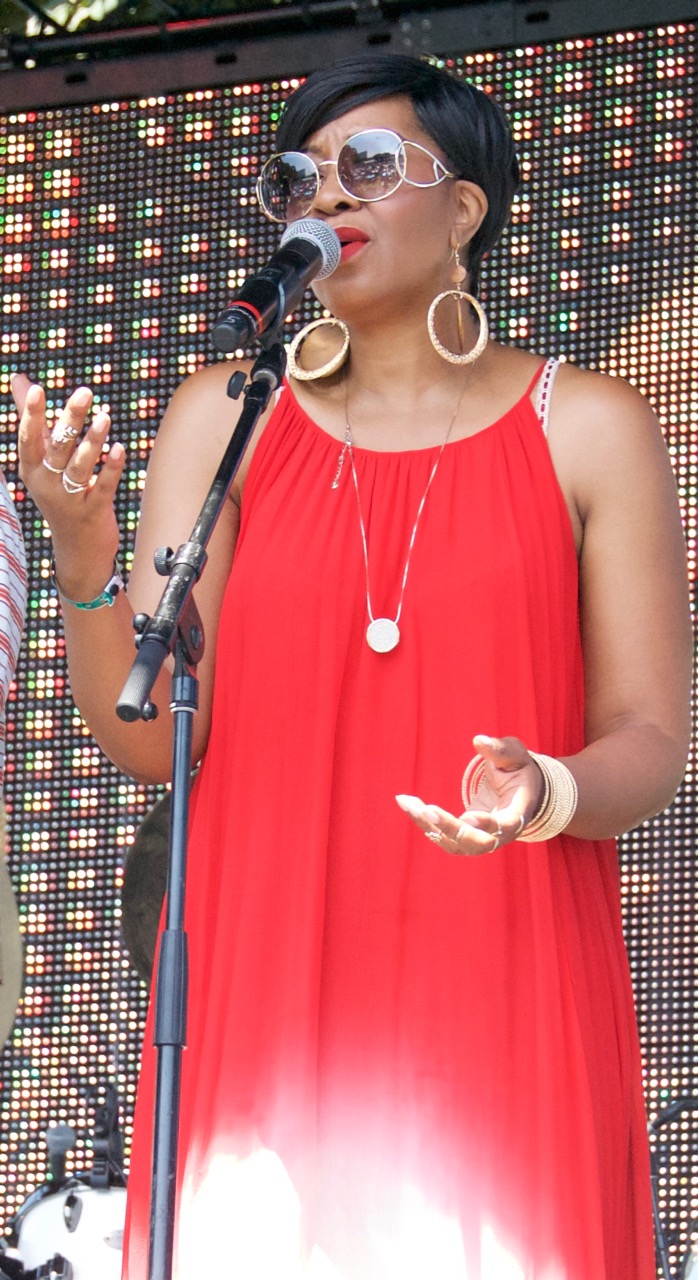 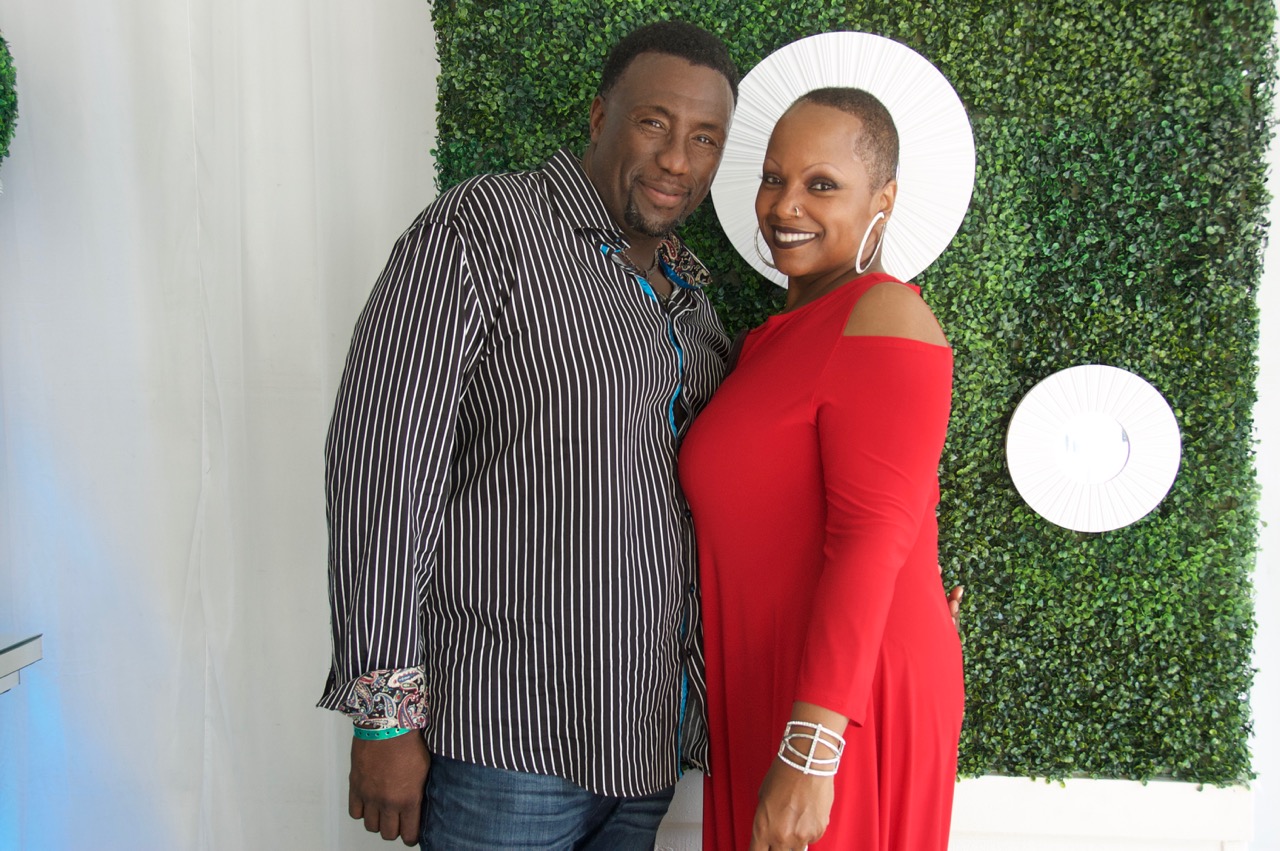 Bridgette Byrant and Will Wheaton added their soulful vocals with two songs.  Their lush harmonies with the help of the backup vocalists resonated sweet and romantic with the song, “So High.” 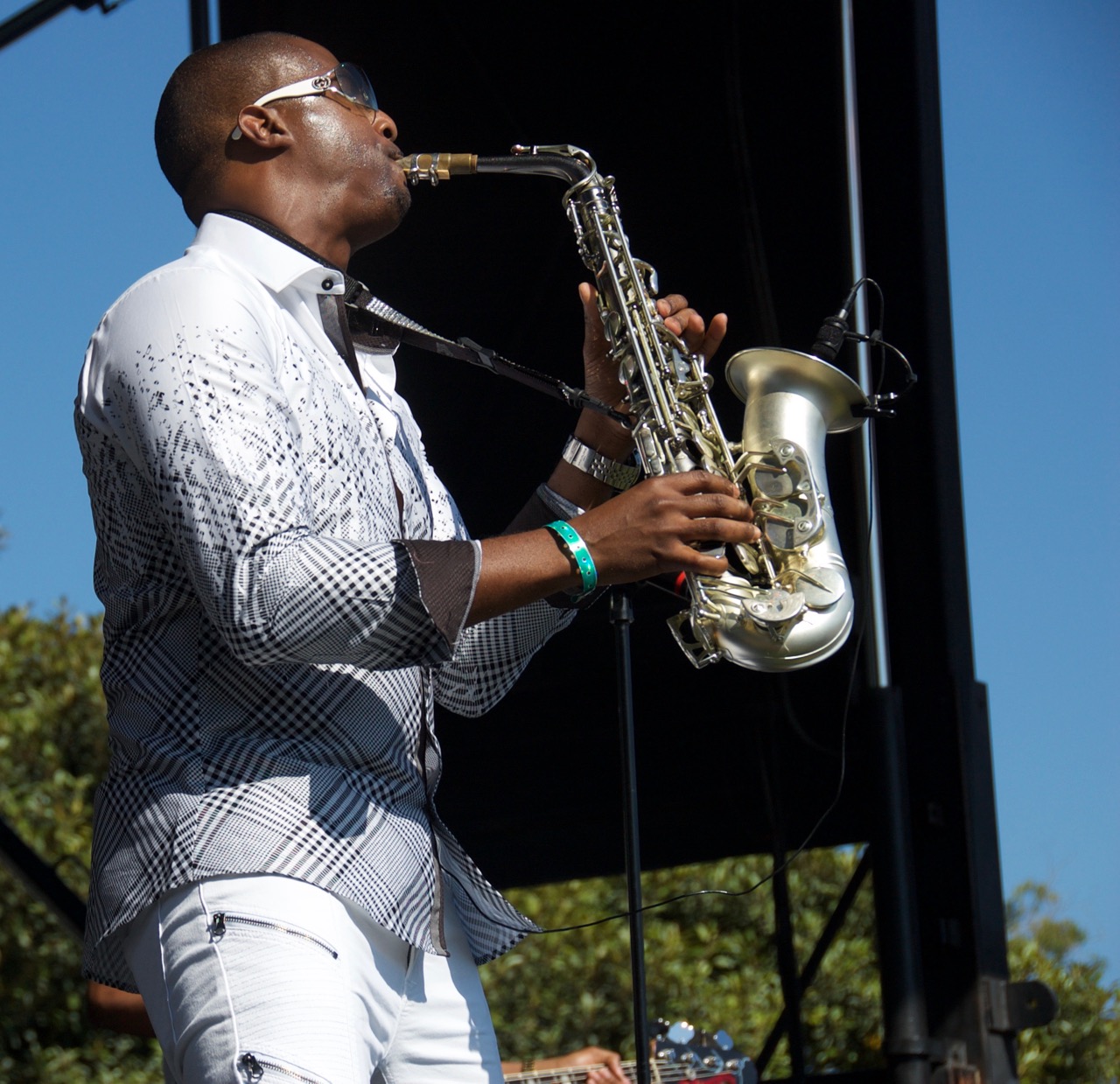 Eric Darius hit the stage at 4 pm with his super-sonic sax playing.  The robust, athleticism of his set excited the fans, especially when he zipped into the audience ripping off his jaunty riffs.  He even took selfies with people while still blowing his horn.

I asked Eric Darius on our Facebook Live interview what energizes him.  “It’s the crowd.  I’ve been performing in front of people since I was 11 years old.  My passion is performing.  I love to see people dancing, clapping and smiling… having a good time.  I feed off of the crowd’s energy and that’s what takes me to another level.”

His latest single is called “Breaking Through” and just came out on iTunes, Amazon and anywhere you can buy music. In 2018, Eric Darius will be releasing a new album. 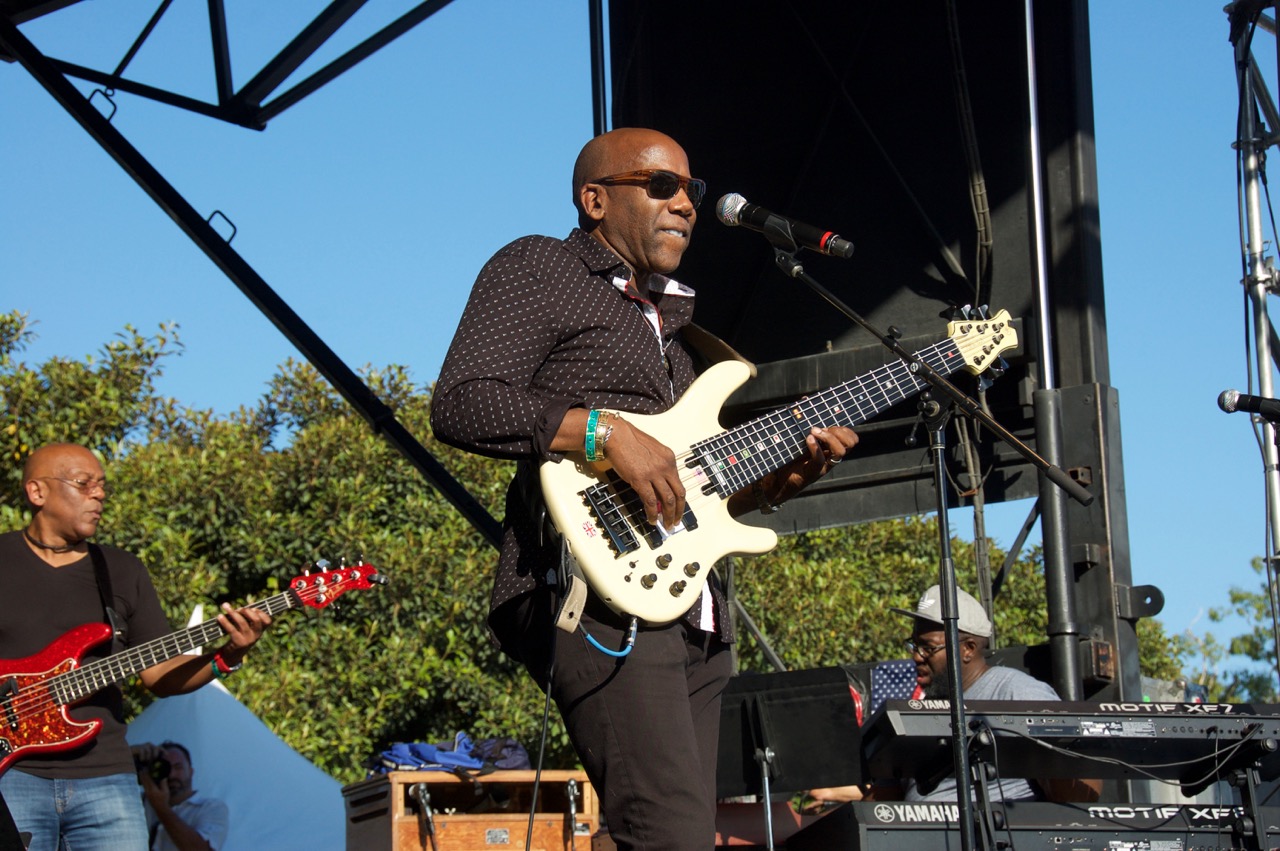 Nathan East, bassist, began the evening program with some free flying funky music.  He showed off some of his newest tunes from his just released album, Reverence. He commented to me in our Facebook Live interview…

“I just released my second album, Reverence earlier this year and we are going around touring.  We just played in D.C.  and then we will be in San Diego soon.  The Long Beach Jazz Festival is one of the most fun jazz festivals because it’s by the water and the scene here so beautiful.”

We heard East do his special scatting and improvisational vocal riffs along with his deep phrasing on the bass strings. The Grammy Winning bassist mixed the set up by changing the pace from some straight ahead jazz to funk/rock/soul sounds. 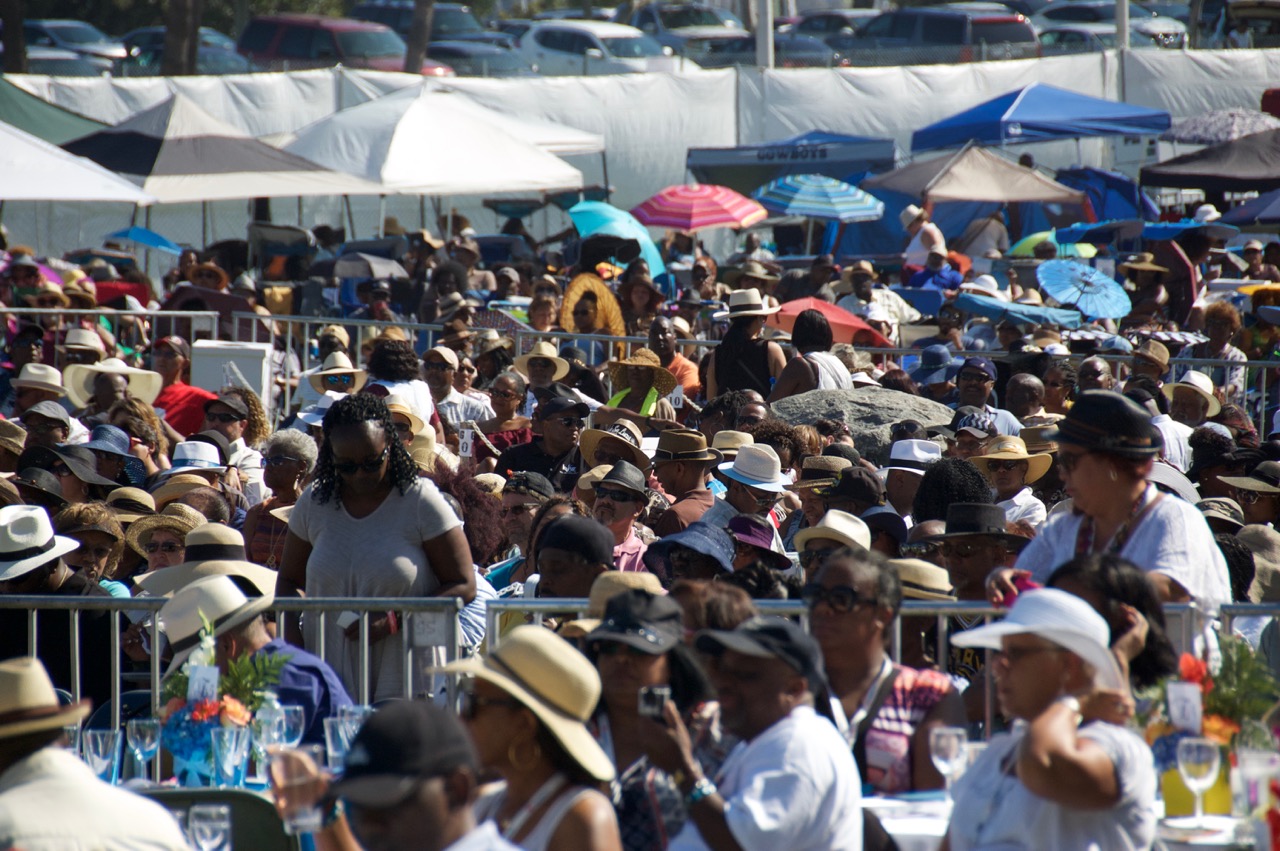 Nathan East’s resume is a mile long as he has been a producer, songwriter and bassist for many years.  Some of the musicians he has played and collaborated with are Kenny Loggins, Eric Clapton, Stevie Wonder, Michael Jackson, and Elton John.  This evening at the Long Beach Jazz Festival the audience got to hear the multitalented bassist in his finest form. 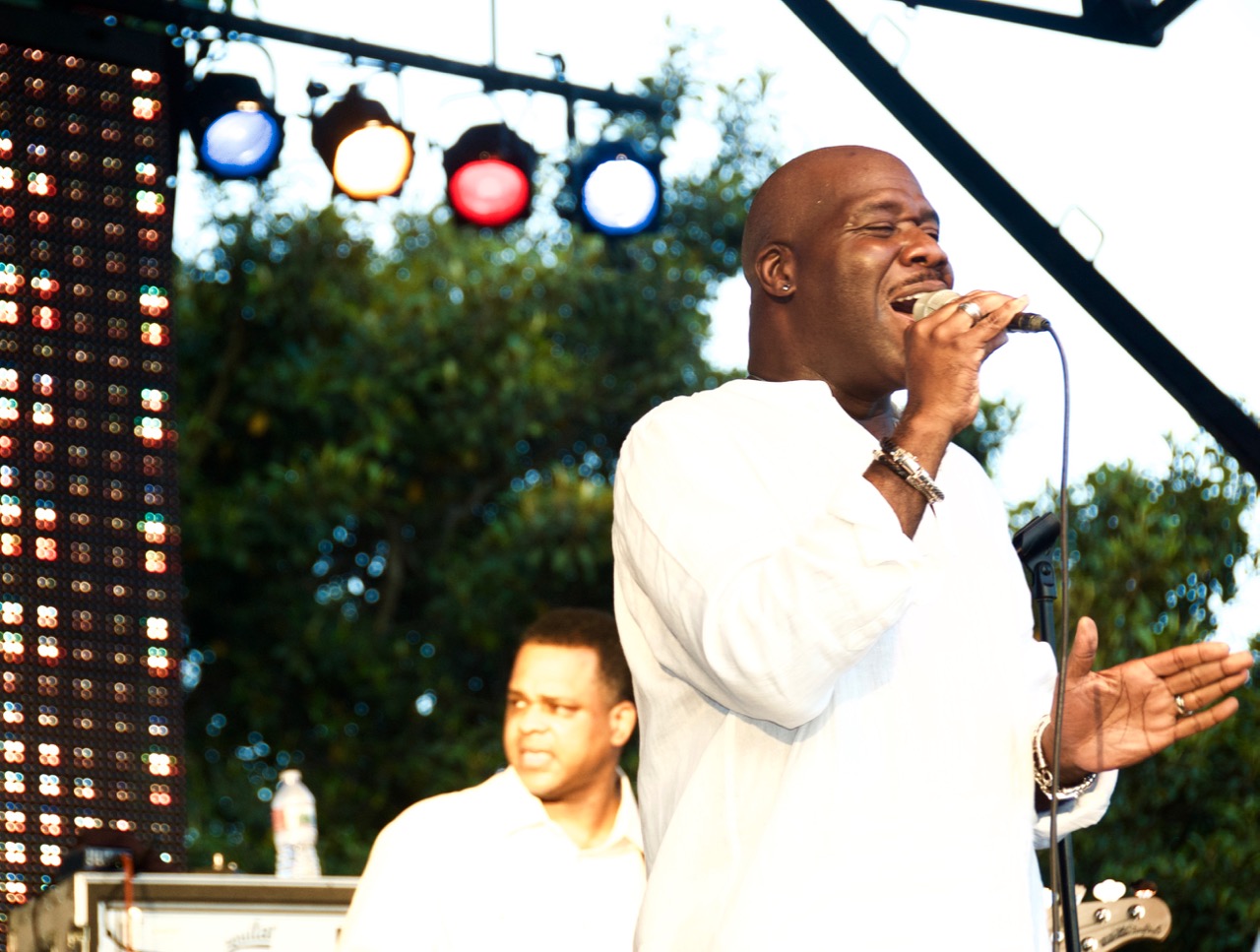 When Will Downing took the stage, you could hear a romantic sigh being released by all the lovers in the audience.  Within moments of his first deep bellowing of the song, the festival’s atmosphere turned into a warm and cozy living room where heart strings thumped in harmony.

His musical careers has spanned 28 years and he has made 19 albums.  The newest CD, Truly Blessed was released July2016.  Tonight, we were all truly blessed by Will Downing’s lustful, rich vocalization of love and commitment. 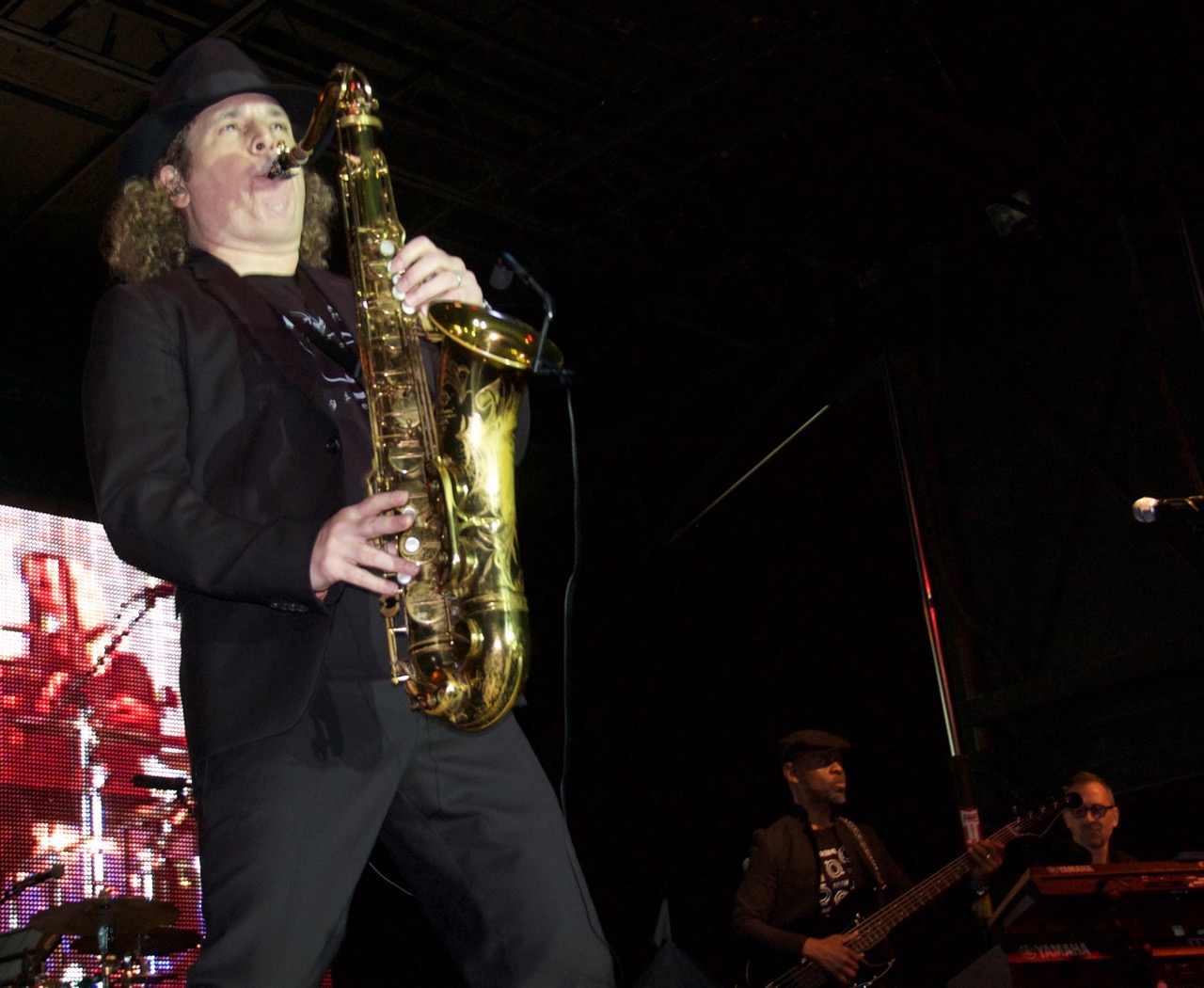 The delicious cherry on the top of the musical sundae to conclude Saturday night’s Jazz Festival was the thoroughly entertaining Boney James.  His presence onstage was the perfect blend of light heartedness mixed with splendid serious blowing of the sax.  Light on his feet,  James skipped around like an elf dancing in the woods… his saxophone was his call into the night enchanting the crowd to follow him along the musical journey.  People were chanting back to him, “Go Boney, go Boney…” and the musician’s face lit up with the pure joy of his mission to bring his brand of futuresoul to all the fans.