On June 16th, the Aratani Theater was full of musical magic as the audience was treated to David Benoit conducting the Asia America Youth Symphony Orchestra and special guest, International jazz pianist, Keiko Matsui performed some of her most popular material. 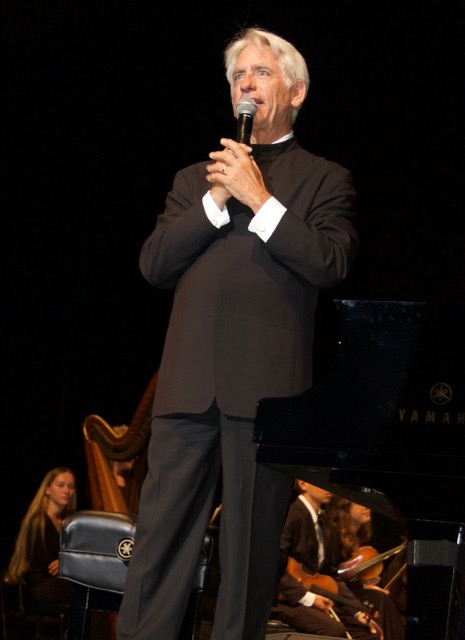 First David Benoit took the stage wearing the traditional conductor’s tuxedo; however his body movements were sprite like…he bounced, he waved his arms like a wave undulating, he leaned in, he twisted his legs in response to the music, and he emanated pure kinetic joy.  The Asian Youth Orchestra’s delivery of “Overture from William Tell” and Ravel’s “Le Trombeau de Couperin was impeccable. The light touches of the oboes, clarinets and flutes were subtle yet poignant. The strings elucidation of each composition furnished a lush and lyrical cushion of sound that tantalized one’s imagination. 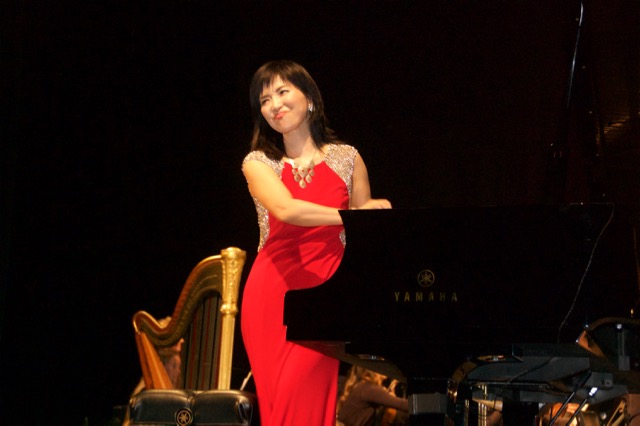 Keiko Matsui then took the stage wearing a flaming red gown with shimmery silver beading. Her presence radiated confidence and happiness. Keiko Matsui is always so gracious and humble when she expresses her sentiments to the audience. As soon as she took a seat at the piano, this petite woman turned into a lioness on the keys. Her black hair whipped around her face as the pianist poured every ounce of herself into the delivery of each original piece. The majesty of her blazing fingering technique combined with the torrid of emotion that flowed out of her hands were utterly entrancing. 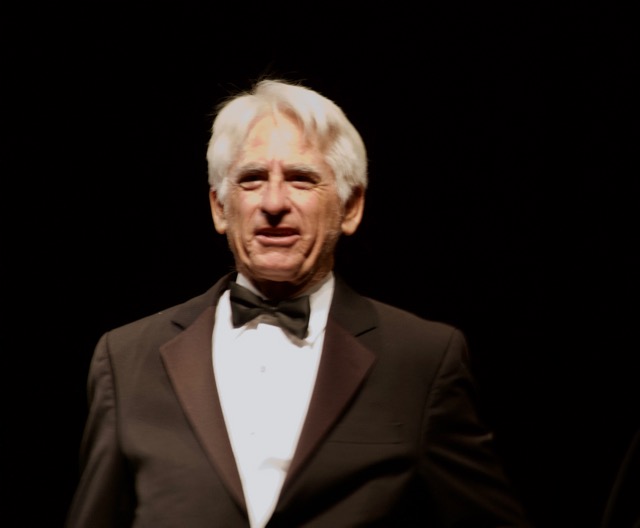 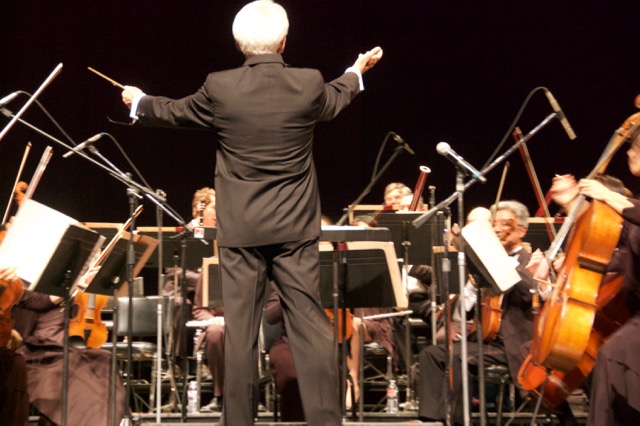 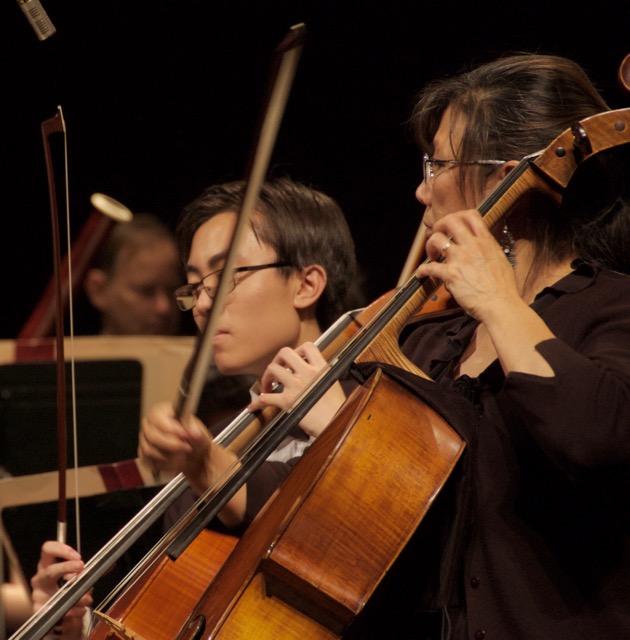 Keiko’s compositions were heaven sent that evening.  As I closed my eyes, I felt the ecstasy of her spirit rise higher and higher out to the universe.  I have interviewed Keiko many times and have found her to be extremely humble and spiritual.  She creates from that space.  Keiko’s  heartfelt love for life, her fans, her creativity, abounds all around her. 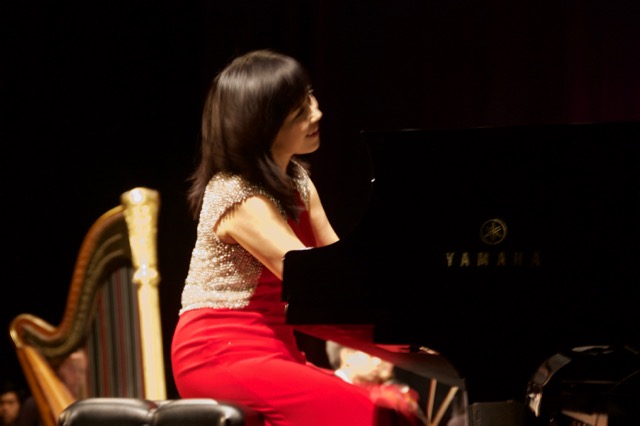 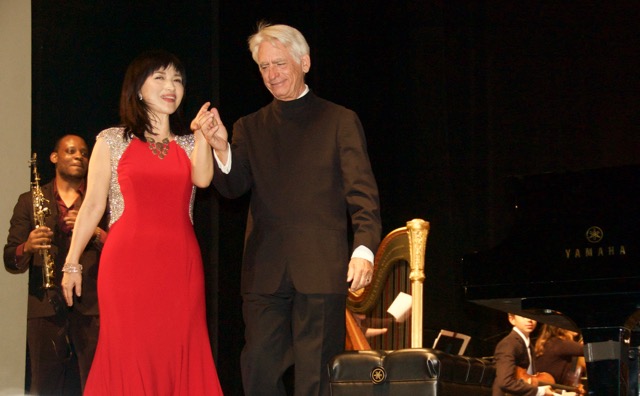 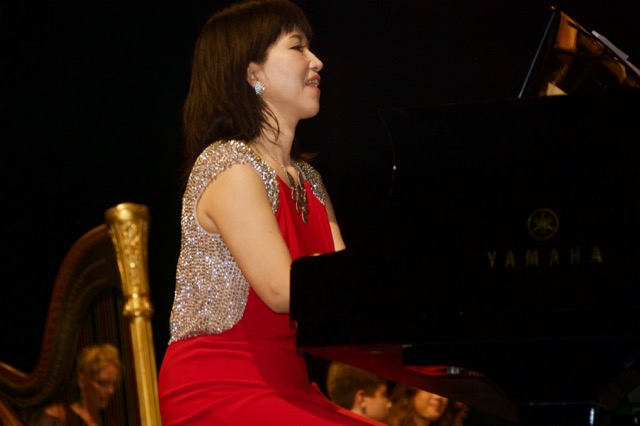 She dedicated the song, “Forever Forever,” to all the father’s in the crowd to celebrate Father’s Day.  The enchanting melody was enhanced by David Hughes’s bass solo which gave way to the band building to a dramatic crescendo.  One was embraced by the feelings of security and belonging from the gorgeous overlay of the composition’s melodic harmonies.  When Keiko played “Journey to the Heart,” the auditorium abounded with deeply profound music evoking images of the heavens and stars, of emerald rolling hills sparkling in the bright summer’s sun, of the peaceful, calm resting place where one meditates.  The strings spun a whirling mystical phrasing bar after bar that underscored the sacred journey to Keiko’s passionate heart.  Bending over the keyboard with the burning fire in her belly to create, she was mesmerizing.

The evening ended with a rowdy, energetic rumpus of piano dueling between David Benoit and Keiko Matsui frolicking on the keys, “Linus & Lucy.”  Keiko was front stage pouncing on the Yamaha grand piano while David Benoit took the position on another piano, behind her.   His hands darted and dashed in a hotfooting of notes.  We witnessed two piano masters whipping around the ivories with intense playfulness.  What a superb finale!

As the two musicians embraced and took their bows with the orchestra, the audience stood clapping.  We all wanted the performance to go on Forever and Forever. 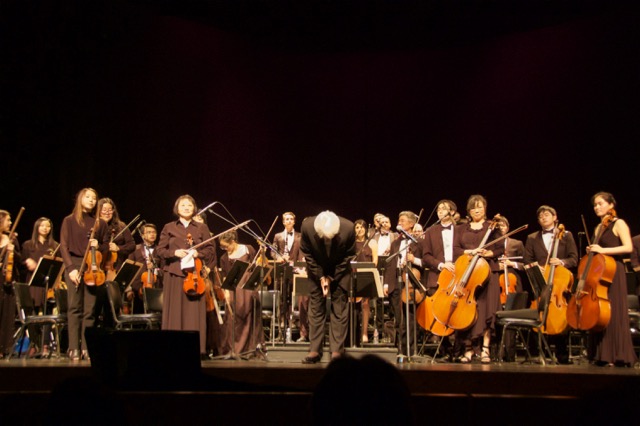 For more information on Keiko Matsui go to: http://www.keikomatsui.com/

For more information on David Benoit go to: http://www.allmusic.com/artist/david-benoit-mn0000635760