John Sloman's "Applegate" sings well and nails every line but is missing the over-the-top showman ham. 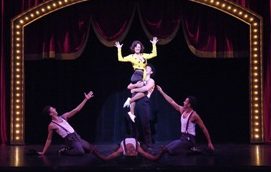 Damn Yankees original words and music by Richard Adler and Jerry Ross, book by George Abbot and Douglass Wallop based on the novel “The Year the Yankees Lost the Pennant.” Runs through Sunday, October 25, 2015 at The Thousand Oaks Civic Plaza’s Fred Kavli Theater. Directed by Kirsten Chandler, Musical Direction by Cassie Nickols and Choreography by John Todd. Damn Yankees in a nutshell is the story of Joe Boyd who makes a deal with the devil that in exchange for his soul, the devil agrees to help Joe’s favorite team the Washington Senators beat those “Damn Yankees” and win the pennant. For the next two hours Chandler takes the audience on Boyd’s journey as Joe Hardy in what Cabrillo Music Theater’s Artistic Director Lewis Wilkenfeld calls “A True American Musical Theater Classic” To say this baseball fanatic, sandlot kid and die hard Red Sox fan was in 7th heaven reviewing this show is an understatement! ANY team that beats the “Damn Yankees” real or imagined immediately qualifies as beyond awesome in my book!

We caught up with two of Damn Yankees outstanding cast members and this is what they had to say about how they prepared for their roles as well as their audition process. “My California debut has been pretty magical. To be playing a dream role, in one of my favorite musicals, with the most wonderful group of people, in a beautiful place, makes me so happy everyday as I drive to the theatre.” Renee Marino (Lola) stated when asked how it felt to be making her California Theatrical Début in “Damn Yankees.” Marino also went on to share how she secured her role as Lola! “I actually did not formally audition for the role of Lola. For the past two years, I’ve had the honor of being a celebrity guest performer/presenter at the “Jerry Herman Awards” at The Pantages Theatre in Hollywood, and this year I chose to sing “A Little Brains, A Little Talent”. Ironically, in the audience that night, was the artistic Director of Cabrillo Music Theatre-Lewis Wilkenfeld who saw my performance. The following week, I saw him again at the Actors Fund Tony Party, and he said they were doing “Damn Yankees” and they’re looking for a Lola. He asked if I had video of me dancing, and I sent it to him. Soon after, I got a call that they wanted me for the role. This was the first time something like this happened to me, so I was very excited!!! I really believe it was all just meant to be!!!”

John Sloman (Mr. Applegate) had an interesting take on the character he plays and took a moment of his time to share his thoughts on working with the cast and the steps he took to prepare for Applegate.

“I have had a blast bringing Applegate to life.  The director… the whole creative staff and cast have been amazing. I approached the devil as I would any other character.  I looked at what’s on the page.  I always try to honor what’s THERE before I start making stuff up.  They had me learn the song for the audition, so I found lots of clues there as he is expressing himself in the fullest and most florid manner in that song.  I did the dossier… the character study questionnaire… that I give my students.  I found where the devil and I intersect…. what our shared core attributes are.  I like to do a psyche profile on my characters as well, so that they are living, breathing, believable human beings.  The Devil and I both had difficult relationships with our fathers… Father, in his case.  I think that his rejection and banishment by God is at the core of who he is.  Once I find that core, then all of the heightened, comedic, whimsical stuff that’s in the script and inherent in this quintessential 50’s musical can be grounded in reality.  Believability is important, even when the script calls for fanciful and fantastical stuff.  I could go on and on, but ultimately I just do all of the detailed, specific work I can do and then try to play… to let it fly.  I also try to think of the whole thing as service… to the audience and to Lewis Wilkenfeld and all at Cabrillo who are trying to keep their theatre afloat. That focus on service gives me a higher focus and mission, and I find that very helpful.  I have a lot of gratitude for this grand opportunity.”

I’m in agreement with Marino’s statement, “I really believe it was all just meant to be!” After watching first hand the impact that Marino and the amazing cast of “Damn Yankees” had on its audience opening weekend. I believe it was all meant to be for not only Marino, the entire stellar cast, but for those of us who were and are fortunate enough to catch this all too brief run of “Damn Yankees.” Cabrillo Music Theater’s creative team does an extraordinary job of transforming the Fred Kavli stage into very believable sets of Joe and Meg Boyd’s living room, a baseball stadium, player’s locker room and a glimpse of hell made to resemble a night club! What a great touch Chandler uses to get the audience into the feel of the show, with Abbott and Costello’s baseball classic scene “Who’s On First” playing just prior to the curtain going up.

Cabrillo Music Theater (CMT) does Broadway’s 11 time Tony Award winning 1950’s iconic musical proud with its fabulous orchestra and stellar cast that includes an outstanding ensemble cast of both kids and adults. Broadway’s Jersey Boys powerhouse Renee Marino (Lola) “A Little Brains, A Little Talent” and “Whatever Lola Wants, Lola Gets”knocked it well out of the ballpark ,as she did with every song she sang, Travis Leland ( Joe Hardy) keep your eye out for Travis we haven’t heard the last from him! Marino and Leland’s “Two Lost Souls” is an energetic romp through Hell’s night club and is fun, fun, fun! The chemistry between Leland and Marino pure joy to watch! Broadway and Mad Men’s John Sloman (Mr. Applegate) singing “Good Old Days” had me tapping my toes, singing along and almost feeling bad for the guy! John Atkins (Joe Boyd) such a gorgeous voice, he’s rendition of “Goodbye Old Girl” memorable! Sarah Tattersall as the faithful, long suffering and kind (Meg Boyd) Tattersall’s , Leland and Atkins “Near To You” just so touching. Have to give a shout out to Katheryne Penny (Gloria Thorpe) and the ball players for “Shoeless Joe from Hannibal Mo.” Adorable still was the intermission / 7th inning stretch song “Take Me Out To The Ball Game” sang by the talented kid ensemble that featured Addie Chandler, Calista Loter, Micah Myers, Drew Rose, and Marcello Silva.

Take a bow choreographer John Todd you had the audience tapping its toes and cheering after Tom G McMahon (Van Buren) and the ball players sang “Heart.” I know Bob Fosse and Gwen Verdon were smiling down from heaven when Marino and the ball players took the stage and brought the house down with “Who’s Got The Pain.” And lets not forget the opening number “Six Months Out of Every Year” with its precision movements and sang convincingly by Atkins, Tattersall and the ensemble.

This show has something for everyone. With such classic numbers as “Whatever Lola Wants, Lola Gets”, “Heart”, “Shoeless Joe” , “ A Little Brains, A Little Talent”, “Who’s Got The Pain” and many more. Damn Yankees will have you singing, laughing, and cheering. It is non stop fun, energetic and filled with the sort of entertainment that has this reviewer traveling back to Thousand Oaks this weekend singing “Take Me Out To The Ball Game” the entire way. Damn Yankees closes October 25. Be sure and get yourself out to the Ball game (Cabrillo Music Theater) this weekend and don’t forget your peanuts and cracker jack!