Following weeks of judging and casting, and after receiving thousands of submissions from around the world, Steve Shaw and David Bellemare are pleased to introduce the final 12 NU MUSES for the first ever NU MUSES 2017 fine art calendar.  NU MUSES will be a millennial take of the classic Pirelli calendar of the 1970’s but reimagined as something artistic, classic and inspirational. NU MUSES aims to redefine how society perceives nudity, reestablishing nudity as something of natural timeless beauty to be celebrated in an elegant and sophisticated way. Over the last few months candidates from around the world have submitted photos and videos in the hopes of becoming one of the final 12 NU MUSES and following a top 100 selection, a round of social media voting and a final the 30 selection, the judges and Creative Director Christianne Brooks, have now made their decision and are introducing the final 2017 NU MUSES – http://numuses.com/site/finalists_dev 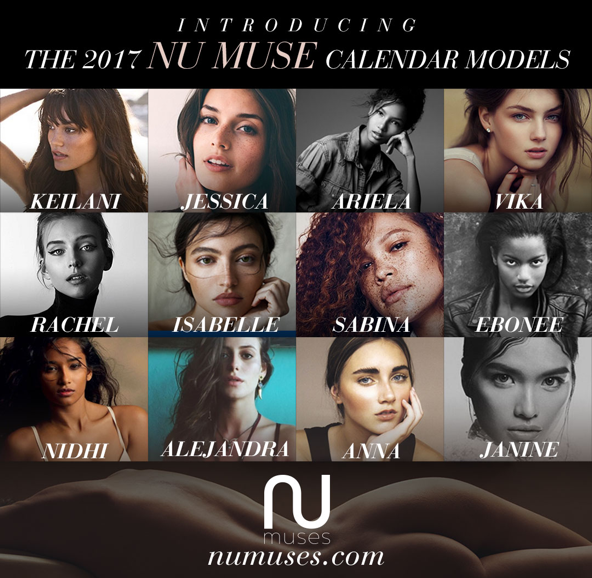 After receiving global submissions from the Philippines, to India, Brazil, and Mexico, the judges and creative director, evaluated the models assessing them on three categories; their unique look and beauty, social media voting allowing people to vote on their favorites, and most importantly their inspiring personality and views towards nudity. The response from the models was outstanding and although the original plan was to announce to a top 20, the submissions were so incredible that both Shaw and Bellemere felt a top 30 was required. The final 30 were then part of a final casting in Los Angeles and New York City where famed French photographer, David Bellemere photographed the remaining models to truly discover which models epitomized the qualities of a NU MUSE – confidence, inspiration, and comfort in the nude form.

After thorough evaluation we are proud to announce the final 12 beautiful, talented, and inspirational NU MUSES.

“I look at timeless beauty as something that is more just a pretty face or a nice body. It is something within the soul, and you can never truly be beautiful if you do not do beautiful things. I try to live by that as much as I can.”

“I feel timelessly beautiful, not because I consider myself as a separate entity more beautiful in contrast to some perceived ordinariness around me, but because I feel connected and see beauty in everything around me.”

“I am so excited to say that I am one of the 12 NU MUSES! I am really looking forward to shooting with David (Bellemere) again. Nude photography is an art and it can be so empowering and I hope that through this project we are able to show you guys that.”

“I flew to the US from Philippines with a DREAM. I wanted to AIM HIGHER. to be globally known and excellent in this industry (modeling and acting). Being in this calendar is a huge opportunity to showcase my beauty and personality, a great exposure for me and hopefully will be the beginning of a long lasting successful career in this field I’m very passionate about.”

Isabelle Boemeke from Muse Models –What does nudity mean to you?

“It means not being able to hide behind your ego, or theatrics. It is you, like you came to the world, pure and natural.”

“No one is timeless, that’s the beauty of photography and art; they make beauty timeless.”

“I always wanted to inspire people, it’s the biggest award I believe. I think David (Bellemere) see women as muses, every woman he worked with he presents differently, shows her special beauty. It would be an honor to work with David.”

Anna Wolf from Wilhelmina Models lives in NYC but is originally from North Carolina.

“When I was little my nickname was Noodle because long and thin like a noodle and eventually that shortened to Noodie. When people heard my mom calling me that they thought she was saying “nudie” and now I am representing as a “nudie.” Haha”

“I’d like to show that being nude is a form of art, and that being nude as a curvy woman with thighs and hips is as beautiful as any other body type. You own your body and should be proud of it – it’s unique.”

Ariela Oliviera  from New York Models shares a message she wants to send to women by appearing in NU MUSES,

“Always feel and look confident, strong, sensual, positive and elegant with your perfect body shape… your beauty will shine from within.”

Keilani Asmus from Wilhelmina Models- shares what viewpoint she would like to change with this nude calendar,

“I want to beg the question as to why shame is associated with my body. I want people to question why they are against nudity in the first place. I’m hoping to help normalize the body, rather than build it up as this taboo thing that should be hidden behind closed doors.”

The 2017 NU MUSES are all uniquely beautiful both inside and out. The diversity of each model doesn’t only lie in their looks, but also their passions and reasons for wanting to be a NU MUSE model.  Speaking about the response and submissions Creative Director Christianne Brooks said: “We were so blown away by the magnitude of support for this project. We have had over 130 million online and social media impressions, each candidate’s social effort, was truly awe inspiring and shows us how poignant and timely this conversation around true beauty and nudity is. It’s such a wonderful time for women and we hope to empower these women and others to celebrate the female form in a sophisticated, elegant and most natural way. Nudity is one of the oldest and classic forms of art and we aim, through NU MUSES, to help reestablish that.”

The NU MUSES 2017 calendar shoot will take place from October 16th-25th. Each NU MUSE will be flown to the Dominican Republic to shoot with David Bellemere at the beautiful Casa Kimball, a private villa located on the north coast of the island. This breathtaking setting with the Caribbean sunlight, coco palms and almond trees, a infinity edge swimming pool, and uninterrupted 180 degree Atlantic ocean views will provide a truly tropical and natural paradise to capture images that will truly reflect the NU MUSES movement. The NU MUSE luxurious calendar will begin presales in mid-November. Each of the 2017 NU MUSE’s being introduced today receives $10,000 and they a part of the calendar launch event and dinner at Art Basel Miami this December where NU MUSES will also be presented as an art exhibition allowing the beauty of nudity to be seen in a gallery setting. A docu-film featuring all NU MUSES is also currently in production and will be officially announced soon.

For more information on the NU MUSES, guidelines, and the overall project process visit www.numuses.com

About Steve Shaw
Steve Shaw has a background in celebrity & fashion photography, shooting for Elle, Vogue, and British Esquire. In 2011, British-born Steve Shaw conceived and launched treats! Magazine as a European-inspired, multi-media brand merging high fashion, photography and sensuality as the ultimate in fine art luxury publishing. Created without the boundaries of commercial restrictions or censorship, treats! goal is to provide creatives with a platform to express their ‘art’ – from fine print to digital & premium video. treats! is designed to give the world’s best photographers, writers & artists a sophisticated, creative outlet with the freedom to have their work published without restriction. Steve focuses on celebrating the beauty of women as nature made them, which can be seen throughout his work.

About David Bellemere
David Bellemere was born and raised in Paris, France. He discovered photography during his high school years, which led him to study visual arts after his Baccalaureate. While in college, David caught the eye of various French magazines that commissioned him in his early 20s.  Over the next few years he traveled throughout Asia regarding his time there as the most influential in his photographic style to this day. David is recognized for his unique light, colors, and composition, always celebrating beauty. The adjectives most often used to describe his pictures are sensual, delicate, and feminine. David currently contributes to the following magazines:  Marie Claire Italy, Vogue Paris, Vogue US, Vogue China, Nippon Vogue, Vogue Spain, Elle US, GQ UK, LUI, Porter Magazine, MUSE, treats! and Harper’s Bazaar UK.