Anticipation is always set high for the CES 2018 Media Days held throughout the Mandalay Bay [Ballrooms] days before the official start of the show, companies like LG, Samsung, ZF, Monster [Cables], Panasonic, Qualcomm, Kia, Hinese, TCL, Toyota, Bosch, Sony among others, were eager to show [off], discuss, and unveil new products. Even though the CES does not start till [today] Jan 9th, this year it held two Pre-CES [2018] Media days [Jan 7 -8], and among the most anticipated event/s of the CES is the Monster [Cables] press conference, which never disappoints.

Noel Lee [in his signature Segway] got things underway, by welcoming everybody.

“Good morning, good morning, good morning, [good morning], you’ll can do better than that,  thank you for being here, we’ve been around a long time, 39 years, 39 years of Monster, let’s hear it. In 2018 were doing a complete “Takeover 2018” that means were doing all our presentations, our theme to market and were going to do everything we haven’t done in the past. One thing were doing is really promoting our branding and our brand name,” enthusiastically explained, Monster [Cables] founder and CEO, known to all as The Head Monster [Noel Lee].

Among announcements Lee made during the press conference was a strategic partnership with Honor [a division of Huawei Technologies Co., Ltd], as their audio partner, a Volkswagen Concept R car powered by Pure Monster Sound Technologies, talk [voice activation] technology called Monster Talk™, to be used in Monster’s new line of Bluetooth [waterproof] speakers Superstar[‘s] with no WiFi needed, Monster’s line of Elements‘ headphones, the new Monster HDX Bluetooth headphones with Monster Talk and Tile’s [lost and found technology] embedded right into the headphones, and two versions of their Airlinks headphones, the Sport and also the fashionable [Airlinks] Elements with the females in mind.

Through communication released before the conference, Product Development Monster James Peterson says, “We chose to align with Speak Music and the Melody Voice Control platform since it most closely fits with the way our customers consume music. Monster’s products are all about the music, especially when people are on the go- in the subway, at the beach, or working out at the gym. MonsterTalk™ powered by Melody is the most powerful and easiest way for consumers to access music across many of the major streaming platforms versus being limited to one or two. We are not tied down to a WiFi connection because we use cellular data. We can even access your local iTunes library on your mobile device, all with voice commands.”

“This is my best friend guys, I love Noel, I [really] do. When I met Noel though he told me he liked to test his equipment on my hit song “Fancy” and I thought that was so cool. He told me about the boom boxes he was bringing back and I remember when I was a little girl and I would tie my boom box to the front of my bicycle and I would ride around with all my friends listening to music together. I love headphones where you can listen to music privately, but I think music is kind of missing that communal aspect that we all enjoy together and create memories how to get those nostalgic moments, so I really connected with Noel in [his] vision to bring that back and updated,” eloquently expressed Azalea, with her hand on Noel expressing her genuine bond. “I love that Noel really creates products with women in mind, you know that are fashionable and that look good when you’re wearing them. For me as a girl I hate to put on headphones that are bulky and are not cute. Noel is always doing something, whether it be in collaboration with Channel or designing his headphones, he is always innovating things for women that look good with what you wear, and look like an accessory and not [you know] like a piece of technology, but moving fashion forward.”

Azalea also announced that she will be featured in a Monster [Products] Super Bowl commercial with [Noel] Lee.

As Media day 2 progressed it was on to the Panasonic, celebrating their 100th Anniversary this year, who unveiled the new and impressive Lumix (Digital Single Lens Mirrorless) GH5 s which allows the camera to support 14-bit raw stills and has a 10.2-megapixel Four Thirds sensor in order to increase the low-light sensitivity to a native ISO 51,200, which is about half the resolution of the 20MP version in the also impressive GH5, unveiled at CES 2017.

Panasonic, being the parent company of Technics which operates as separate entity, also unveiled the Technics Direct-Drive SL-1000R Turntable System for audio enthusiasts, a standard model inheriting the technology of the SL-10 and SL-1000, which was developed as a reference direct-drive turntable for the next generation fusing Technics’ Traditional Analogue and Leading-edge Digital Technologies, such as the coreless direct-drive motor and precise motor control technology, high-rigidity platter about integrating Alexa and Google Assistant into cars via its Skip Generation In-Vehicle Infotainment platform,  and high-sen tonearm.

During the press conference, Panasonic also unveiled the impressive line of OLED TVs – the FZ800 and FZ950 series, which support HDR10+ dynamic metadata technology and will ship in 55-inch and 65-inch sizes, featuring Panasonic’s HCX video processor which enables a feature called Dynamic [Lookup Table] LUT, preferences that shift the image to match the colors and brightness intended by the content creator. 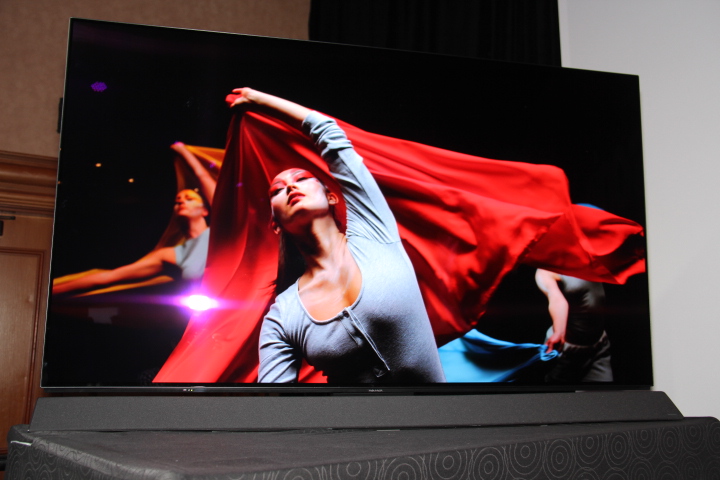 Other initiatives and partnerships also discussed during the press conference was the one with the city of Colorado Springs, Colorado, to work on Smart Cities Projects, including a high-tech US Olympics museum, partnering with Tesla on building better batteries for electric vehicles, and the close working relationship with [both] Amazon and Google, about integrating [Amazon’s] Alexa and Google Assistant into cars via its Skip Generation In-Vehicle Infotainment platform.