Mariela in the Desert is a stunning and mesmerizing story about sacrifice, family, love and regret with art and Mariela at its core. Playwright Karen Zacarías , Director Robert Beltran, Casa 0101 Theater and the Angel City Theatre Ensemble in Boyle Heights presented us with an eccentric, heart-rending and comic story where the characters play out their lives against the barren and unforgiving vastness of the desert. 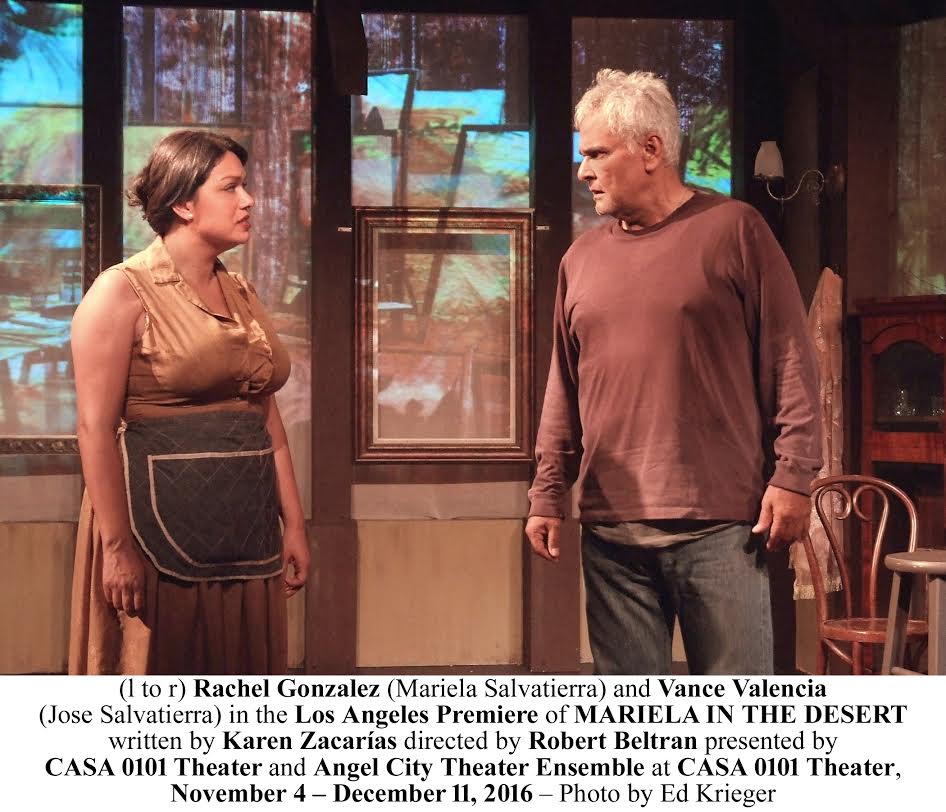 It’s 1951, and one-time celebrated Surrealistic painter José Salvatierra (Vance Valencia), who once was friends with the leaders of Mexican Expressionism, the likes of Frida Kahlo and Diego Rivera, is living in the desolate northern desert of Mexico with his wife Mariela. Mariela, once a rising artist, made a choice to be a traditional mother to her children and a nurturing wife to Jose rather than pursuing her own artistic dreams. 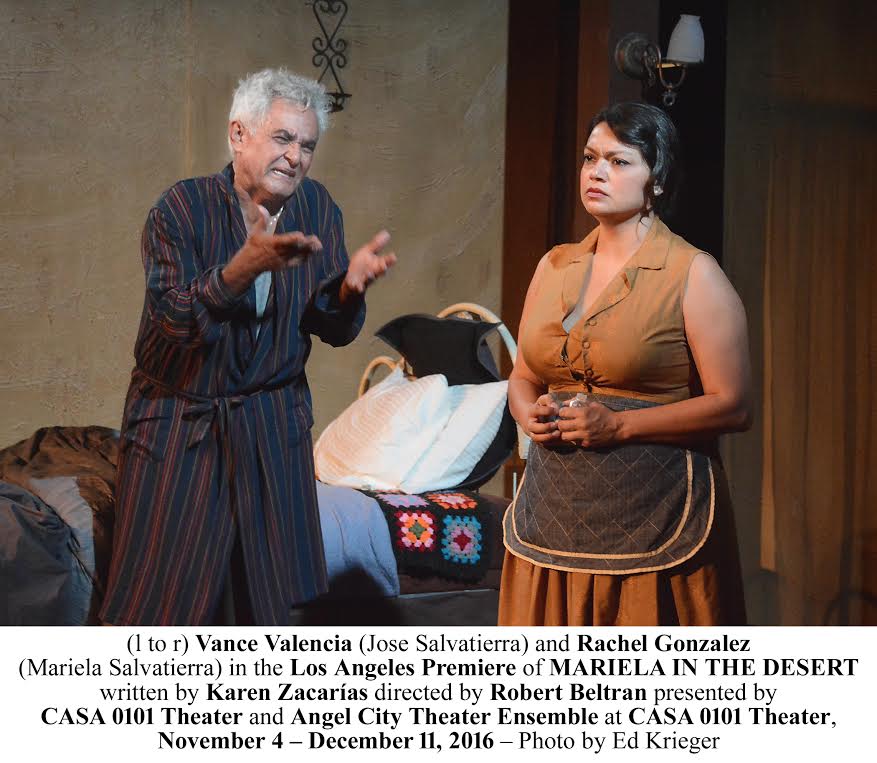 José, had years earlier, moved his family to the Northern Desert in Mexico, in his effort to bring beauty back to art and create an artistic revolution, hoping to build a retreat for artists who would be inspired by the beauty and serenity of the desert.  Instead the house became a prison, haunted by lies, consequences, and José’s prize winning painting The Blue Barn that looms over the family, its secrets hidden in every brush stroke. For Mariela, the real specter is her late son Carlos, a young boy, who was tragically killed years ago (as seen through flashbacks) and is rumored to be seen running through the desert. 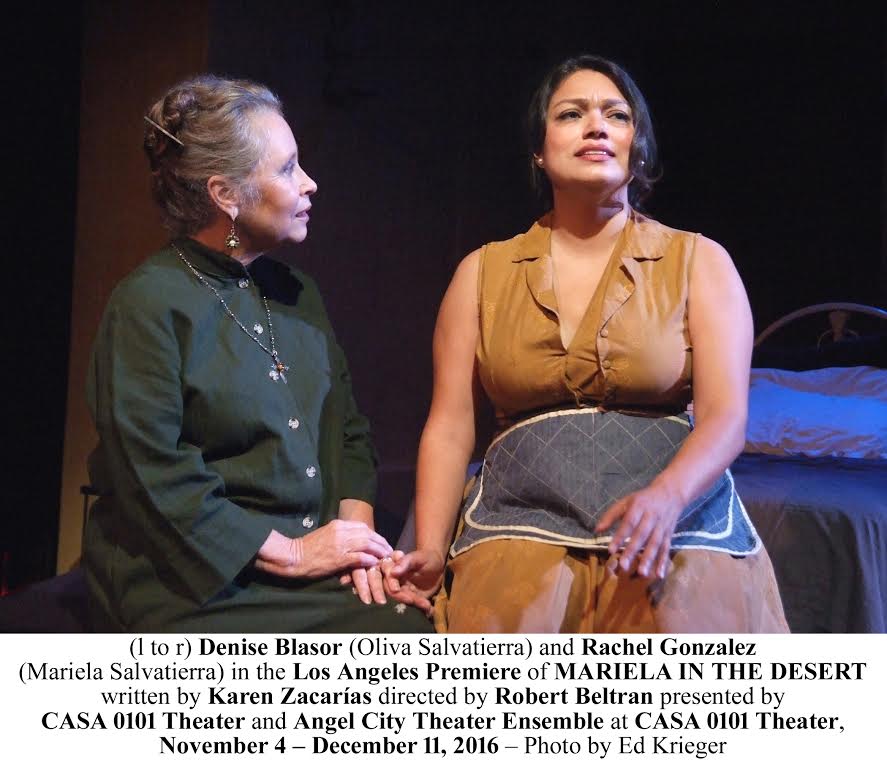 Mariela, several years José’s junior, is now the caretaker of her aging artist husband who is now sick and dying from complications of diabetes and spiritually broken with his vision never being realized. Mariela and Jose’s older sister, Oliva (Denise Blasor) must deal with his petulant behavior that has become more and more difficult to endure, with him even using a fork to stab Oliva in her hand.  Oliva lives with Jose and Mariela and still holds faith in God and in the home that she remembers as, “an art oasis in the desert.” 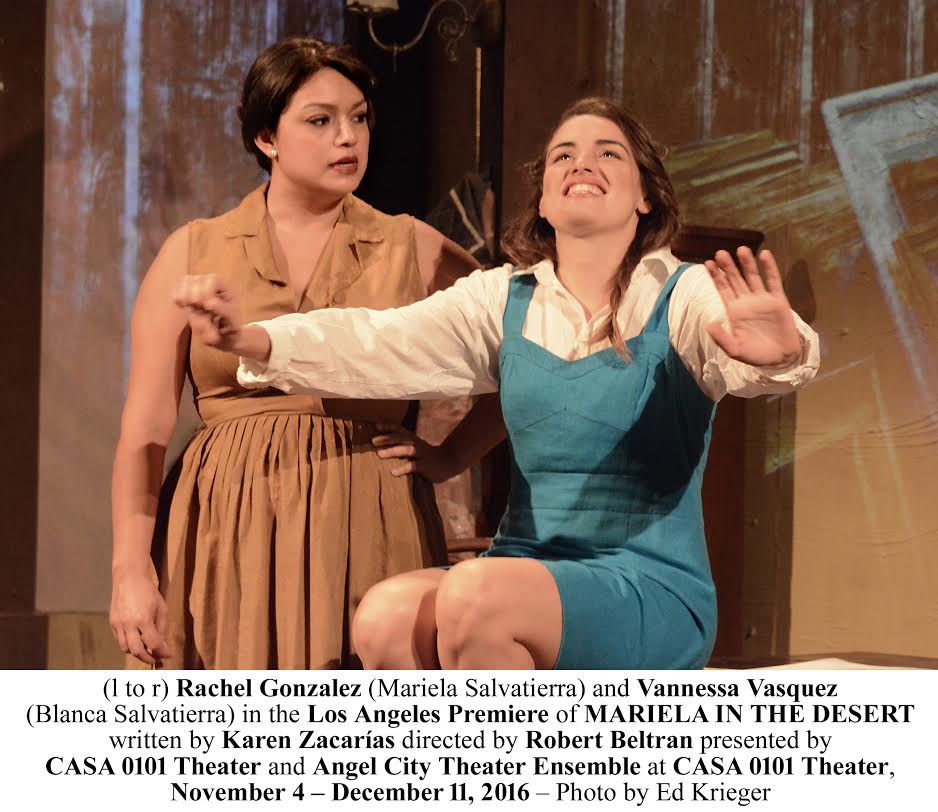 Their daughter, Blanca (Vannessa Vasquez), now a young woman, left to Mexico City as a young girl to escape the loneliness and oppression she felt living in the desert.  The prodigal daughter, has now become an emerging artist and is summoned back home through an exaggerated telegram sent to her by her mother, saying her father had died. She returns with her American Art History professor and lover, Adam Lovitz (Randy Vasquez), who is older than she, and in some ways mirrors her mother and father’s relationship. 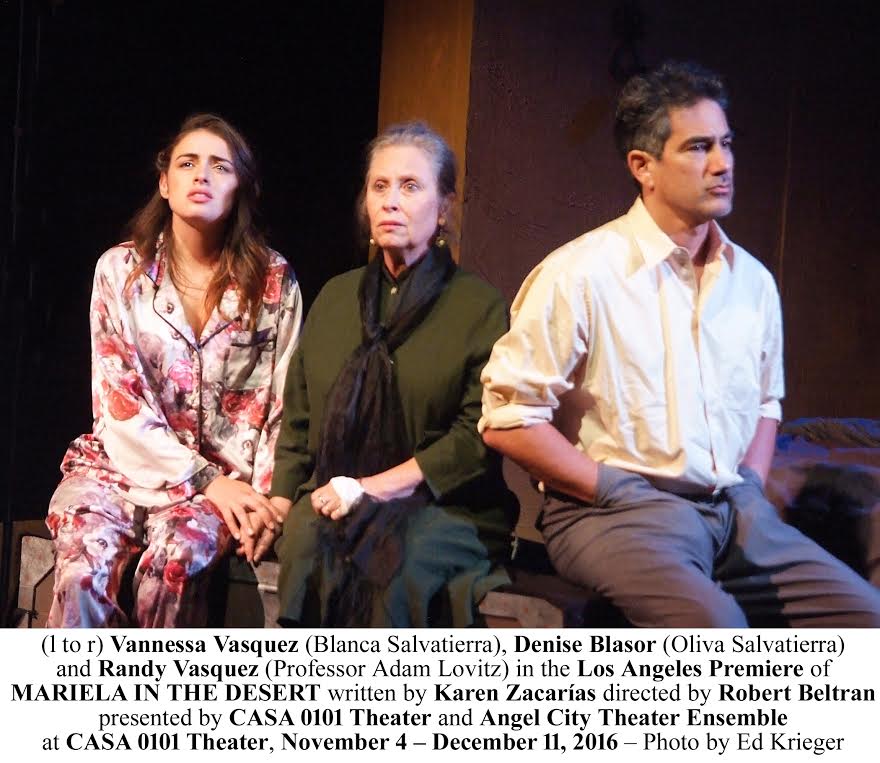 Blanca’s return ignites memories of the past and exposes grim truths. Mariela never wanted to live there, but as resilient as she was, her resilience gave way to her loyalty and love for Jose. José’s admiration and jealousy of Mariela’s talent led him, along with Mariela, to perpetuate lies. 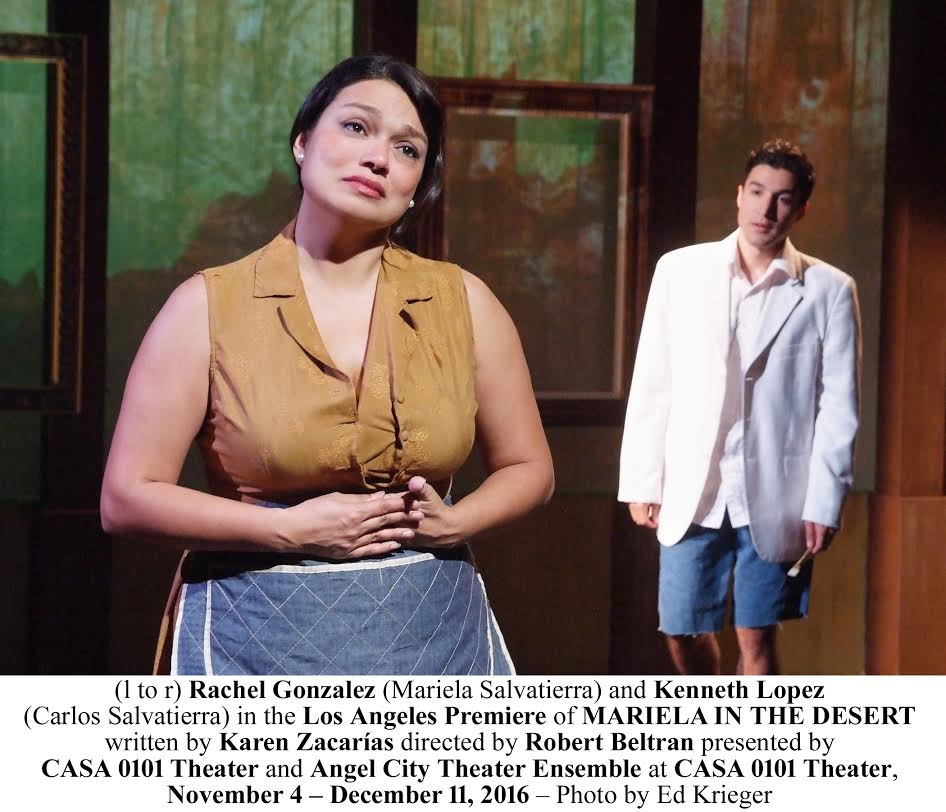 The play ends on a spiritually satisfying and inspiring note as Mariela rises above her pain and is given a second chance to live her truth.

Robert Beltran’s directorial skills illuminate Zacarías’ intense story with a sensitivity that gives us cohesive flashbacks and a well-executed crescendo of emotions throughout the play. He draws out beautifully orchestrated performances from this outstanding ensemble of actors. 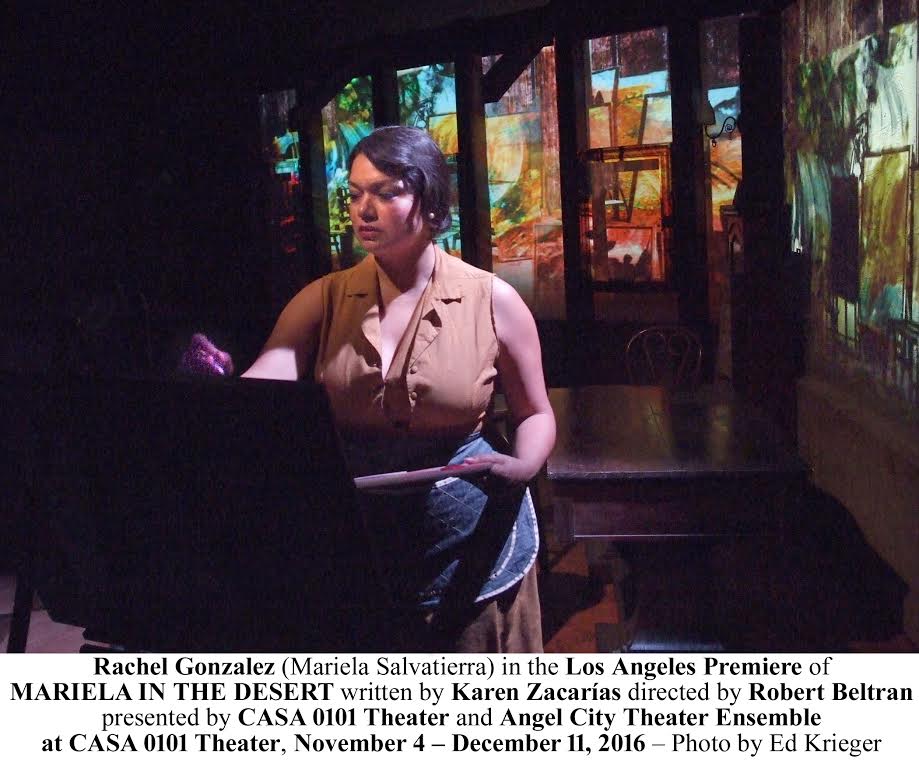 Mariela’s character could have been nothing more than just a bitter woman who married the wrong man and let one critique destroy her career, but she creates a complex character that plays against type. She is not the hyperactive over-emotional creative you might expect to be palling around with Diego Rivera and Frida Khalo. Rachel Gonzalez impressively, gives us a Mariela, that is a calm, nurturing, likable, strong woman with a seething written on her face, and subtle body language that conveys what simmers under the surface. 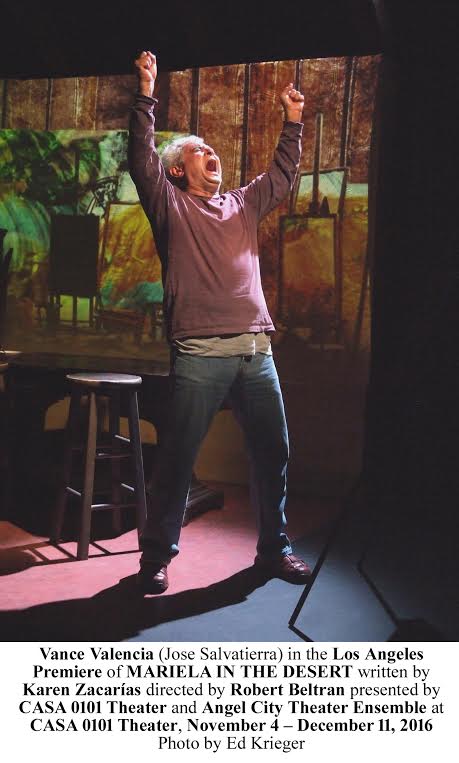 Vance Valencia’s, José, is played with a thundering child-like explosiveness with invigorated touches of humor. Valencia, founder of Angel City Theatre Company, shows us a flawed, exasperating, tortured character that we grow to care about.

Gonzalez and Valencia make their reciprocal tension and love profound and poignant.

Denise Blasor’s performance is graceful as the timid and sentimental spinster Oliva.

Vannessa Vasquez gives an indelible and moving performance as the young adult Blanca and is delightful as the child Blanca.

Kenneth Lopez, plays the little boy Carlos, who appears to be developmentally challenged, empathetically, as he pounds on his head in frustration and uses repetitive phrases, like “The scorpion is so still….so still….so still.” after Mariela kills a scorpion. 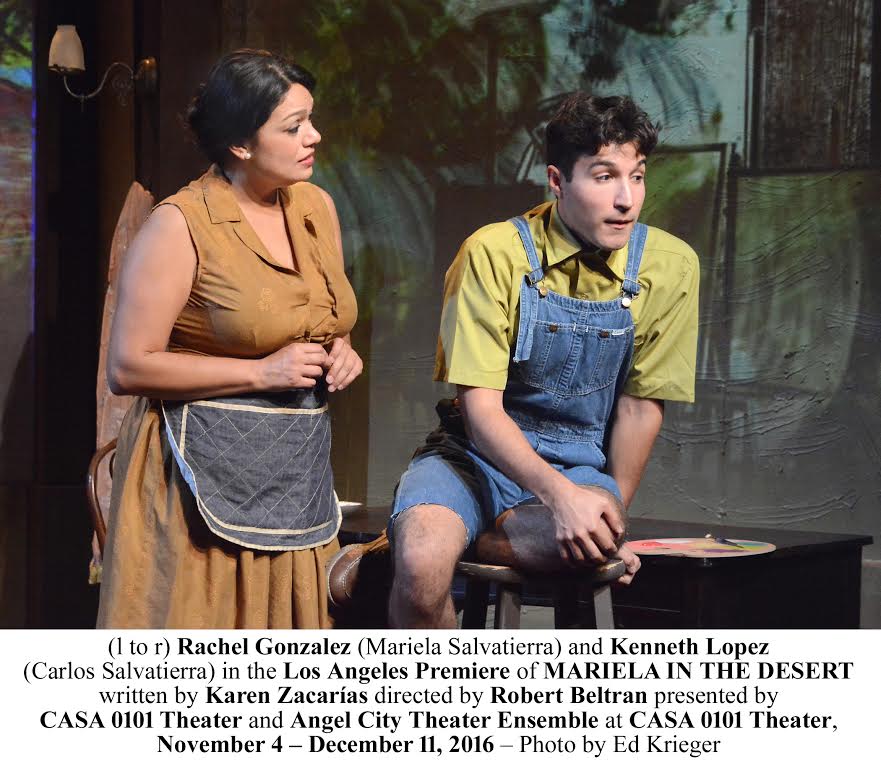 Adam Lovitz was played with restraint by Randy Vasquez. He gave Lovitz an intellectual spirituality that was gentle rather than pretentious.

The culmination of José’s career, the prize winning painting of The Blue Barn, is a character unto itself, and near the end of the play, the importance of the painting is made evident. Throughout the play we are only shown the back of José’s masterpiece, which allows us to paint the canvas in our own minds, just as Mariela had done for years.

Marco De Leon’s set design and Kevin Vasquez’s lighting design was warm and rustic, which made the Salvatierra home feel like a once grand desert ranch house.

Mariela in the Desert tells a story with universal themes of family, love, loyalty, isolation and the human condition, while embracing Mexican culture and exploring our flaws as human beings, leaving me optimistically inspired to live my own truth. 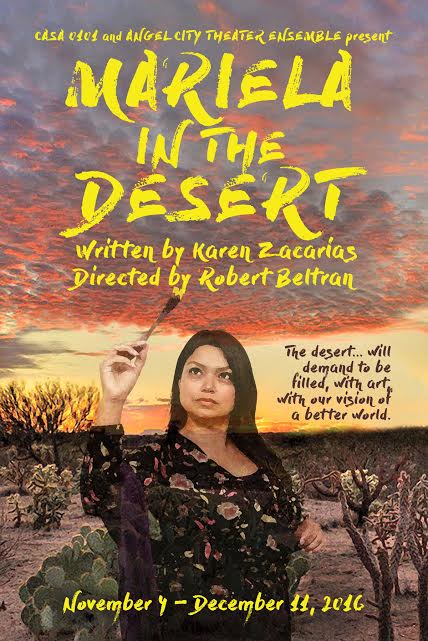 Mariela in the Desert plays Fridays and Saturdays at 8pm with Sundays at 5pm until December 11, 2016 (no performances on Thanksgiving weekend) at Casa 0101, 2102 East First Street, Los Angeles CA 90033.

The theater also has FREE Acting, Writing, Theater classes for youth and adults in the community. It also produces provocative performances written/produced and created by minority groups promoting the voices of the LGBT, POC communities.

Located in the theater lobby is the Jean Deleage Art Gallery which is now displaying: 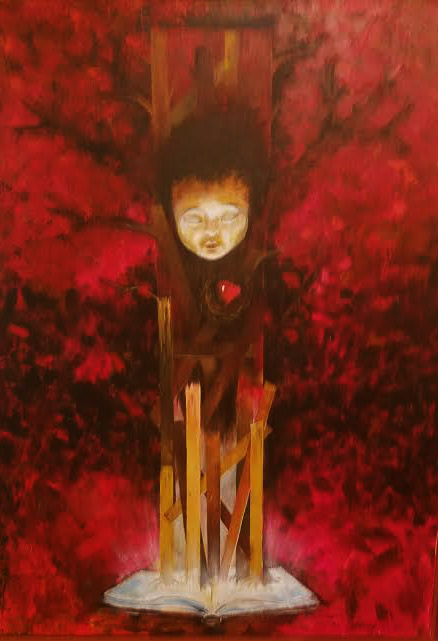 Anyone can propose a play for production. All are welcome to submit. Year round plays, spoken word events, readings and more make this theater an oasis of hope in the Boyle Heights community.