“I haven’t worked with any other female engineers except for myself and a few of the ladies today,” Thompson said during the workshop. “I’m really honored to step into the first female engineering location. It’s very inspiring … I think that there are some core people in this camp that are really going to change the world. “

Women’s Audio Mission (WAM), is San Francisco-based nonprofit that is dedicated to the advancement of women in music production and the recording arts. On April 10, 2016, WAM presented an intensive drum recording workshop at the Women’s Audio Mission Recording Studio that included some amazingly talented women including drummers Kiran Gandhi, music producer and drummer for M.I.A. and Thievery Corporation, and Kimberly Thompson, recording artist and drummer for Beyoncé and Late Night with Seth Meyers .

Every year, Women’s Audio Mission trains over 1,200 women and girls in the only professional recording studio in the world that is built and run entirely by women. The workshop was led by WAM Executive Director Terri Winston who trained over 20 young women in some drummers basics , like, how to prepare and tune a drum kit and select and place microphones to produce high-quality, professional recordings of live drums. The students were then given the opportunity to participated in a live recording session of both Gandhi and Thompson on drums.

“I think one of the things I’m most inspired by is how energetically positive this place feels. It just feels super supportive, celebratory of each other’s music, everyone is super good at what they do,” Gandhi observed. “I just feel like my comfort level here is so good and stable … Today’s class was just through the roof good vibes … Everyone was so happy working together, we had a blast playing, teaching and getting inspired.”

“WAM is so honored to have Kiran and Kimberly here working with our students,” Winston said. “What a life-changing experience for our students to witness such incredibly accomplished and gifted drummers who were so generous with their knowledge and experience. It doesn’t get any better than this.”

If you’d like to hear more from Gandhi and Thompson , here is an exclusive WAM podcast interview produced by WAM student interns. 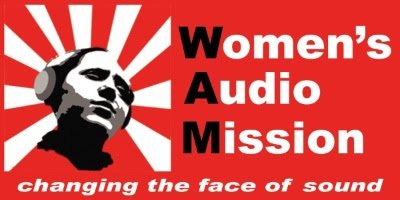 Women’s Audio Mission is a San Francisco based non-profit organization dedicated to the advancement of women in music production and the recording arts. In a field where women are critically under-represented (less than 5%), WAM seeks to “change the face of sound” by providing hands-on training, experience, career counseling and job placement to women and girls in media technology for music, radio, film, television and the Internet. WAM believes that women’s mastery of music technology and inclusion in the production process will expand the vision and voice of media and popular culture.

“Passing Myself Down to the Grave” Book Release Party