WELCOME TO THE JUNGLE! 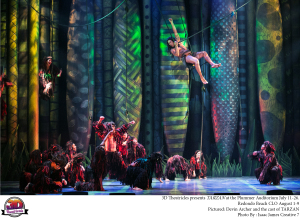 “We’re very pleased to present what will be a truly unique major-regional premiere for Southern California. “Tarzan” is not only a great adventure, but a beautiful story of family, love and acceptance.” 3-D Theatrical’s Founder/Executive Producer, Artist Director and Assistant Director on Tarzan T.J Dawson stated in an earlier interview.

3-D Theatricals chest thumping, heart warming and sure to please “Tarzan” based on the Disney film of the same name opened this evening at Redondo Beach Performing Arts Center much to the delight of its enthusiastic audience! Tarzan continues its regional premiere at The Redondo Beach Performing Arts Center, after its successful run in July at Fullerton’s Plummer Auditorium. Adapted from the story “Tarzan of the Apes” by Edgar Rice Burroughs and originally produced on Broadway by Disney Theatrical Productions; with original music and lyrics by Phil Collins and book by David Henry Hwang with Musical Director/ Conductor Nick Petrillo, Director Rufus Bonds, Jr (Ragtime, Into The Woods, Porgy and Bess) does an outstanding job of bringing Tarzan alive on stage. Bonds Jr had this to say about the amazing acrobatic flying from vines scenes that kept this reporter holding her breath through some of the most death defying flying stunts! “We try to keep the flying at bay for as long as possible. It’s just not a spectacle; it’s truly about the heart of the piece.” Well as much as Bonds Jr has made the attempt to keep the flying at bay, it is beautifully woven into the fabric of this heart warming tale of love and acceptance.

Hats off to 3-D Theatricals on a superb selection of an outstanding ensemble and a cast of 34 led by Devon Archer (Tarzan), Katie De Shan as the funny, adorable and naïve ( Jane Porter),Daebreon Poiema as the strong, determined (Kala), Mark Cedric Smith as proud, powerful leader (Kerchak)hilariously funny with show stopping vocals to boot, Lawrence Cummings(Trek) , adorably determined to fit in Jude Mason (young Tarzan), Joey D’Auria as the sweet and fair (Professor Porter.) and last the guide you love to hate Brian Abraham (Clayton.) Tarzan opens with an incredible aerial choreographed scene by the fabulous Paul Rubin of the family being tossed to and fro on a ship in a horrendous storm at sea that results in the ship sinking and the family is tossed overboard and eventually onto the shores of West Africa’s coastline.

Let me just take a moment to talk about the spectacular aerial choreography (Paul Rubin), Set Design ( Stephen Gifford), Lighting Design (Jean-Yves Tessler) and Sound Design/Engineer (Julie Ferrin), Stage Choreography (Linda Love Simmons) and Costumes by (Sharell Martin) This dream team has collaborated to put together a show in my opinion that rivals anything seen on Broadway!

What is truly at the heart of Tarzan is the story of family, dedication, acceptance, love and loyalty. It begins with Tarzan’s family ending up on the shores of West Africa after a shipwreck. Shortly thereafter Tarzan’s parents die leaving the infant alone. Kala (Daebreon Poiema) a female gorilla grieving over the loss of her infant happens upon Tarzan and takes him in. Kerchak (Mark Cedric Smith) the head of the tribe wants nothing to do with Tarzan, undaunted by the ridicule she receives from Kerchak and the other gorillas in the tribe, Kala raises Tarzan (Devin Archer) and (Jude Mason as young Tarzan) as her own.

Throughout the story Tarzan continuously longs to win the love and acceptance of his father and the rest of the tribe, he calls “family.” Bonds Jr takes us along on Tarzan’s often perilous, agonizing, heart breaking quest to find the answers he seeks as to why he is so different from his “family.”

Those answers come quickly as Tarzan happens upon the beautiful Jane Porter who has gotten herself tangled in a man eating plant while out seeking new species of plant life as well as bugs! Jane was in the jungle as part of an expedition with her Professor father who was there to study and view gorillas. This is where Archer and De Shan’s chemistry really kicks into high gear. Both Archer and De Shan feed off each others comedic timing and what ensues next is a hilarious encounter that will forever rock their worlds, and change their lives forever.

It is certainly no surprise to me why 3-D Theatricals is an award winning company: having been to a few of their productions over the past year, they never disappoint and neither will you be in your decision to check out Tarzan. Get yourself down to The Redondo Beach Performing Arts Center for this feel good show of the year! Tarzan runs through Sunday Aug 9.