The Hollywood 360 would like to wish Tony Award winner star of stage and screen John Lloyd Young a very Happy Birthday!

Young born on the 4th of July has been seen out and about in Los Angeles enjoying the premier of the Tony Award winning musical “Beautiful.” As well as an evening out with family and friends at Hollywood’s Magic Castle much to the delight of his L.A fans!  Keep your eyes open New York City! Young is heading your way where he will make his Feinstein’s 54 Below debut beginning Tuesday July 5 through the 9th. Young has been busy touring the country over the past year with shows at the Kennedy Center Washington D.C, The Carlyle New York, Feinstein’s at the Nikko San Francisco and North Hollywood where he has been performing monthly at Sterling’s Upstairs at the Federal. Especially exciting are the new songs Young and his Grammy nominated Musical Director Tommy Faragher have been collaborating on and debuting at the concerts throughout the year. Young will be doing a variety of songs off his album “My Turn,” as well as selections in Mandarin and Spanish!  Those of you attending the NYC concerts are in for an AMAZING show, Young never disappoints. Young who made his Broadway debut as Frankie Valli in the original Jersey Boys for which he won a Tony as well as numerous theater awards,  went on to star as  Frankie Valli in Clint Eastwood’s film “Jersey Boys” can now add songwriter to his long list of accomplishments!  Happy Birthday John Lloyd Young! TheHollywood360.com knows the real fireworks will be at Feinstein’s 54 / Below tomorrow evening and running through the 9th.  Don’t miss it! Tickets are still available- Be sure to get yours and experience the magic that is John Lloyd Young. 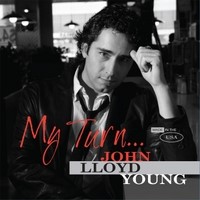 My Turn is available on itunes, cdbaby and Amazon