Sony’s streaming network, Crackle, is celebrating the second season of its star-studded drama “The Art of More,” November 15th, at the prestigious New York Museum of Arts and Design. For the first time, the network will live stream the red-carpet premiere in virtual reality using the Orah 4i camera to give fans all around the world the possibility to immerse themselves fully into the world of the stars. The livestream will be available on Crackle’s YouTube channel from 6:30pm EST – https://www.youtube.com/user/Crackle 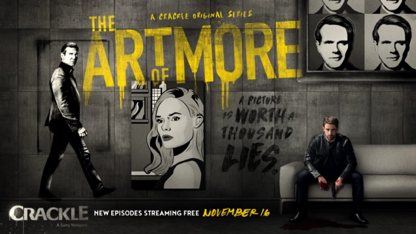 The second season of “The Art of More” is a high-stakes journey of greed and desperation through the New York auction scene where it’s not just the art and memorabilia that comes at a high price. Our characters’ attempts to achieve power, revenge and greater levels of success only create complexities that will find them becoming more like the frauds and forgeries that they are attempting to sell.

On The Red Carpet  were “The Art of More” cast members, including:

Crackle, a unit of Sony Pictures Television, programs Hollywood movies, popular TV shows, original series and feature films for the worlds connected audience.  Available in 21 countries on every screen, Crackle is always freely accessible with no subscription or commitments required.  The streaming service houses a robust library of original programming available anytime, anywhere on every connected device. Crackle is available on Facebook or follow @Crackle on Twitter for real time updates.  For additional information, please go to www.crackle.com.

Orah 4i is the first all-in-one VR camera capable of capturing and streaming high-quality full spherical 360 video in real-time with the push of a button. Due to its professional image quality, incorporated stitching software and simple integration with YouTube and other 360 video platforms, Orah 4i is the perfect solution for live streaming high-profile events to a wide audience. Its discreet design and handy size enable the camera to be placed at the heart of the action without disrupting the show. Thereby Orah 4i offers the audience a whole new viewing experience – point-blank and with an ability to choose their own perspective on the show.
Orah 4i was first introduced in April this year by VideoStitch Inc., a leading company in VR solutions previously known for its stitching software. For more information visit orah.co and follow @orahvr on Facebook and Twitter.

Robert Zemekis, Marion Cotillard, and Brad Pitt at the Premiere of "Allied"