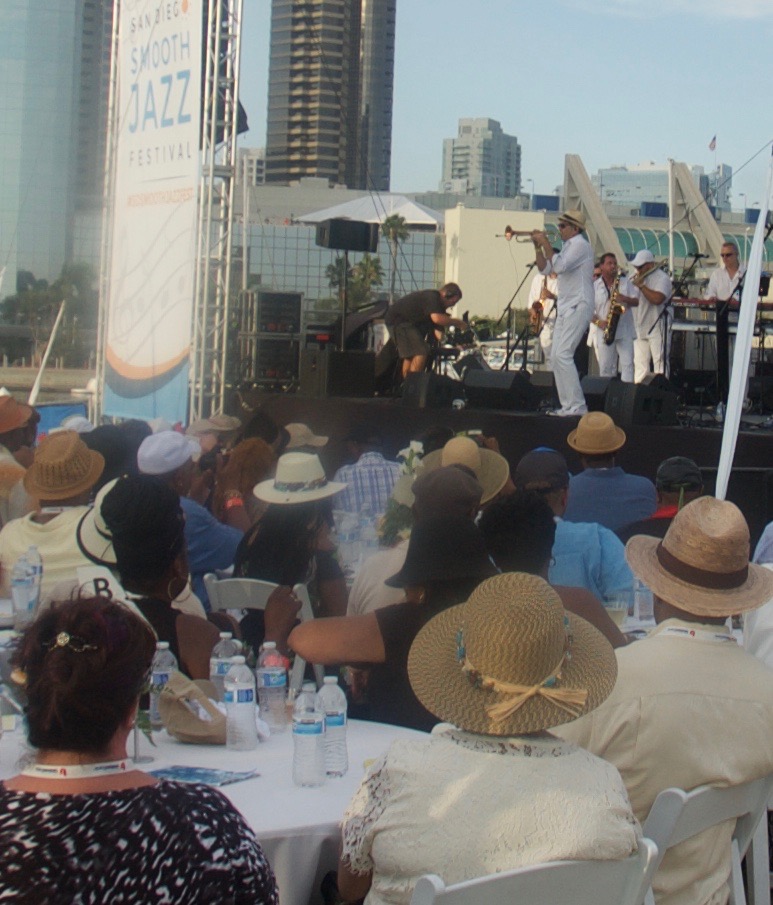 The two-day event featured some of the best smooth jazz artists touring the country while also offering a variety of delicious cuisine, vendor booths, and a spectacular scenic venue that overlooked the harbor.  The Hollywood 360 covered the shows and the red carpet on Saturday and Sunday.   I went Facebook live, interviewing the L.A. Collective, Brian Culbertson, Curtis Brooks, Nick Colionne, and Michael Franks.  Keiko Matsui and Peter White also popped in to say hello. 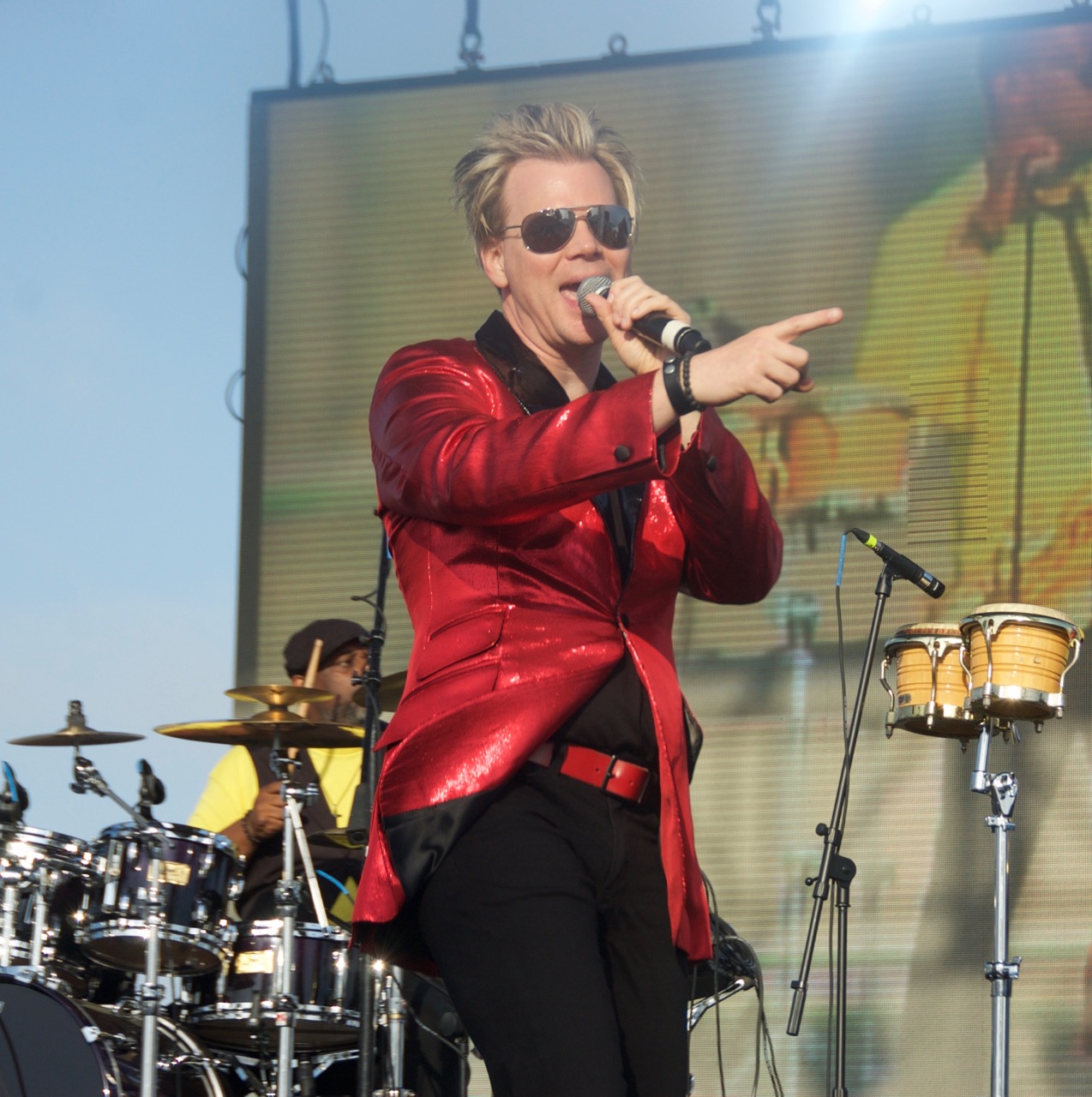 Brian Culbertson mesmerized the audience on Saturday night with his spellbinding vamping antics which were backed up by a seething hot outpouring of Culbertson’s soulful music. From the moment this musician hit the stage his kinetic passionate energy vibrated like a lightning storm…first riling up the audience with his enthusiastic intro, then belting out some bopping lyrics, then ripping up the keys, then grabbing the trombone and blowing with the sax and trumpet player. “Funk” is the name of his album, “Funk” is the name of his traveling tour, and “Funk” is what Brian Culberston emanates from head to toe –from the jaunty blonde licks hairstyle to his razzle dazzle fire engine red jacket, to his plucky dance steps.

For the last year or so Brian Culbertson has been on the road promoting his “Funk” tour but he’s been doing it the old fashioned way – covering the country in a tour bus. He told me in my Facebook Live interview that he thoroughly enjoys the close camaraderie that the band shares traveling this way. It is very apparent that Brian and his super tight group have established a formidable bond observing their stellar performance that night. As Culbertson hugged his keyboard then played it backward with complete expertise…he showed us all the many facets of a true Funk Master.

BTW, Brian Culbertson announced he will be releasing a romantic solo album on Valentine’s Day, 2018. 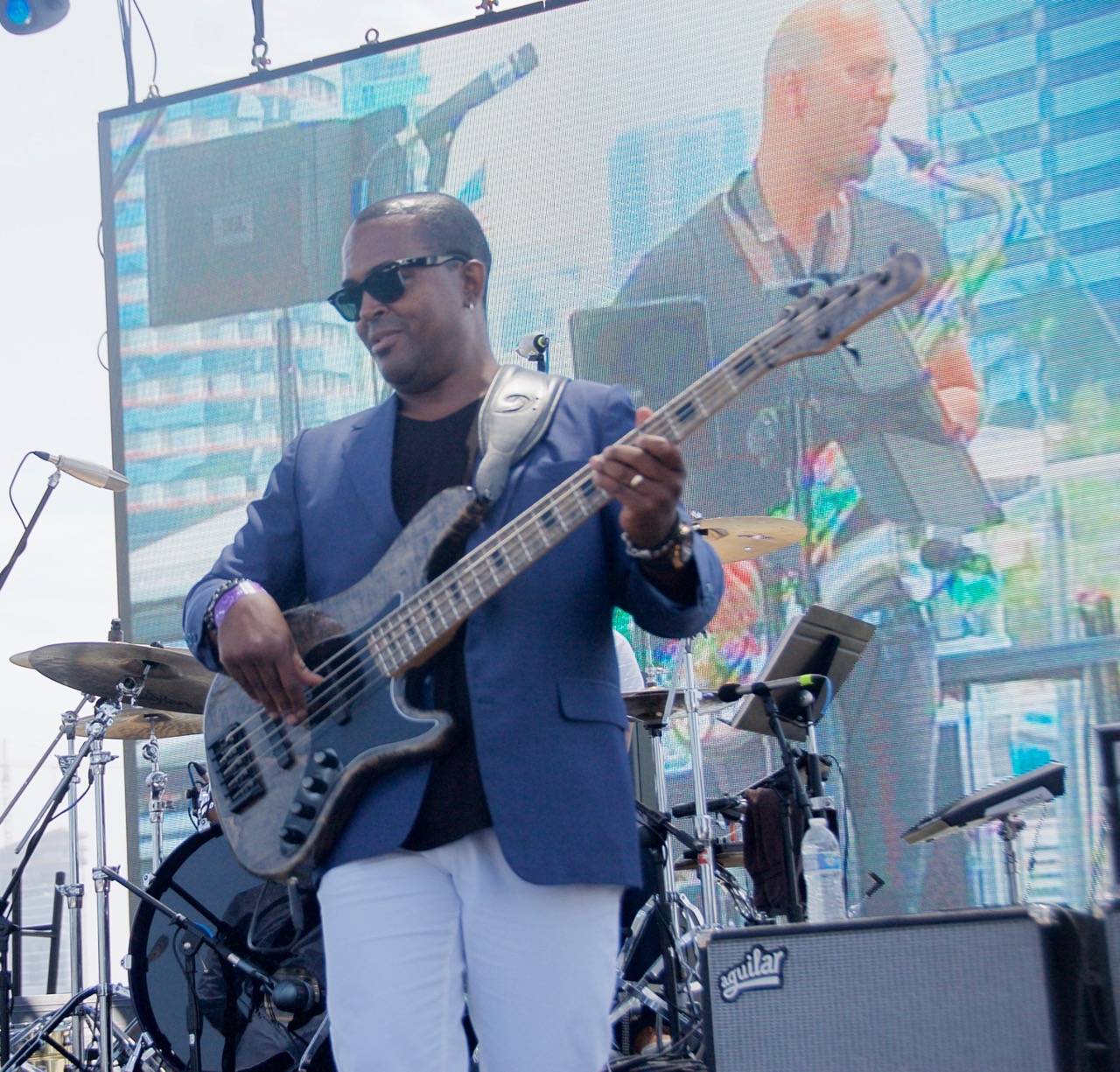 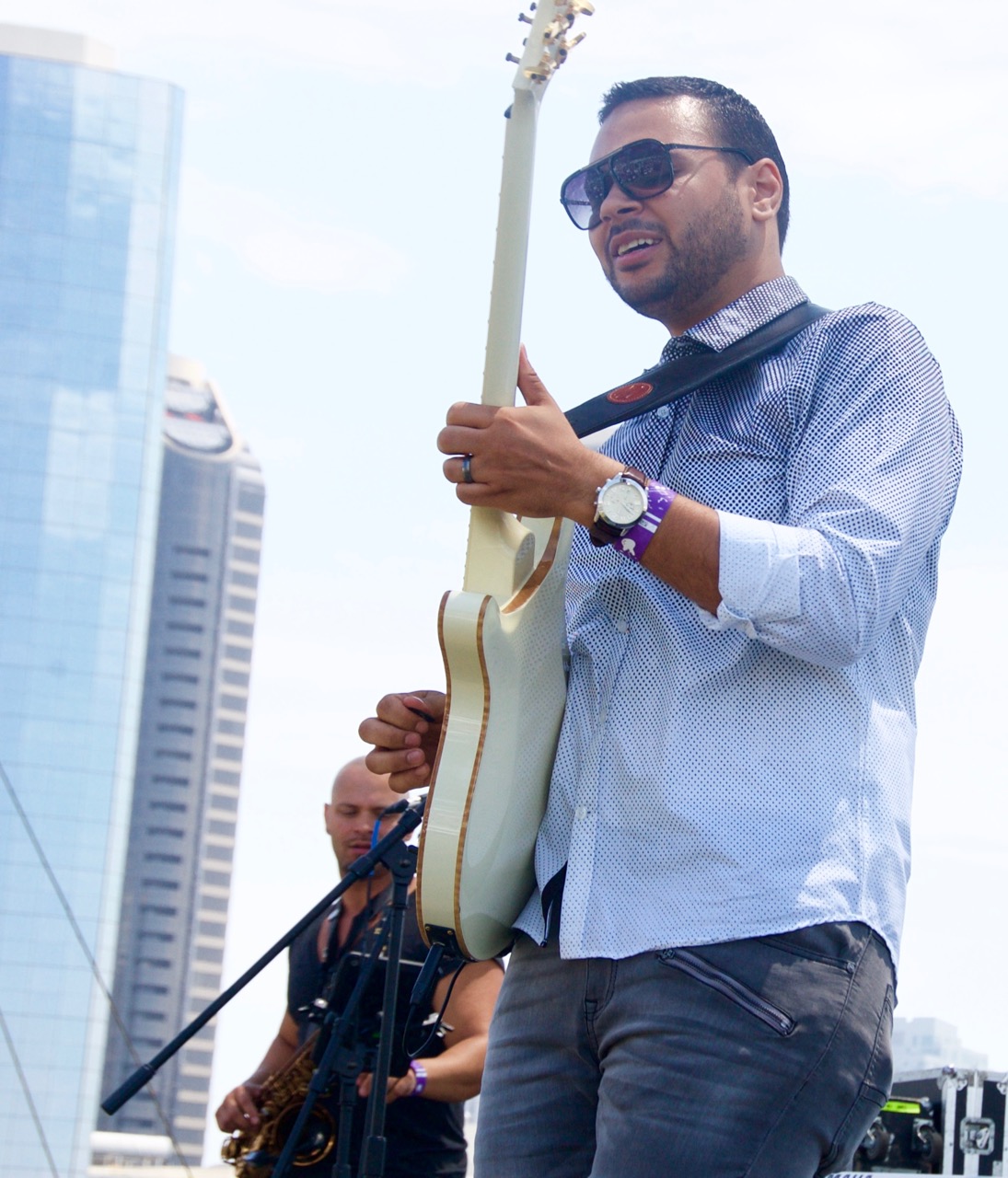 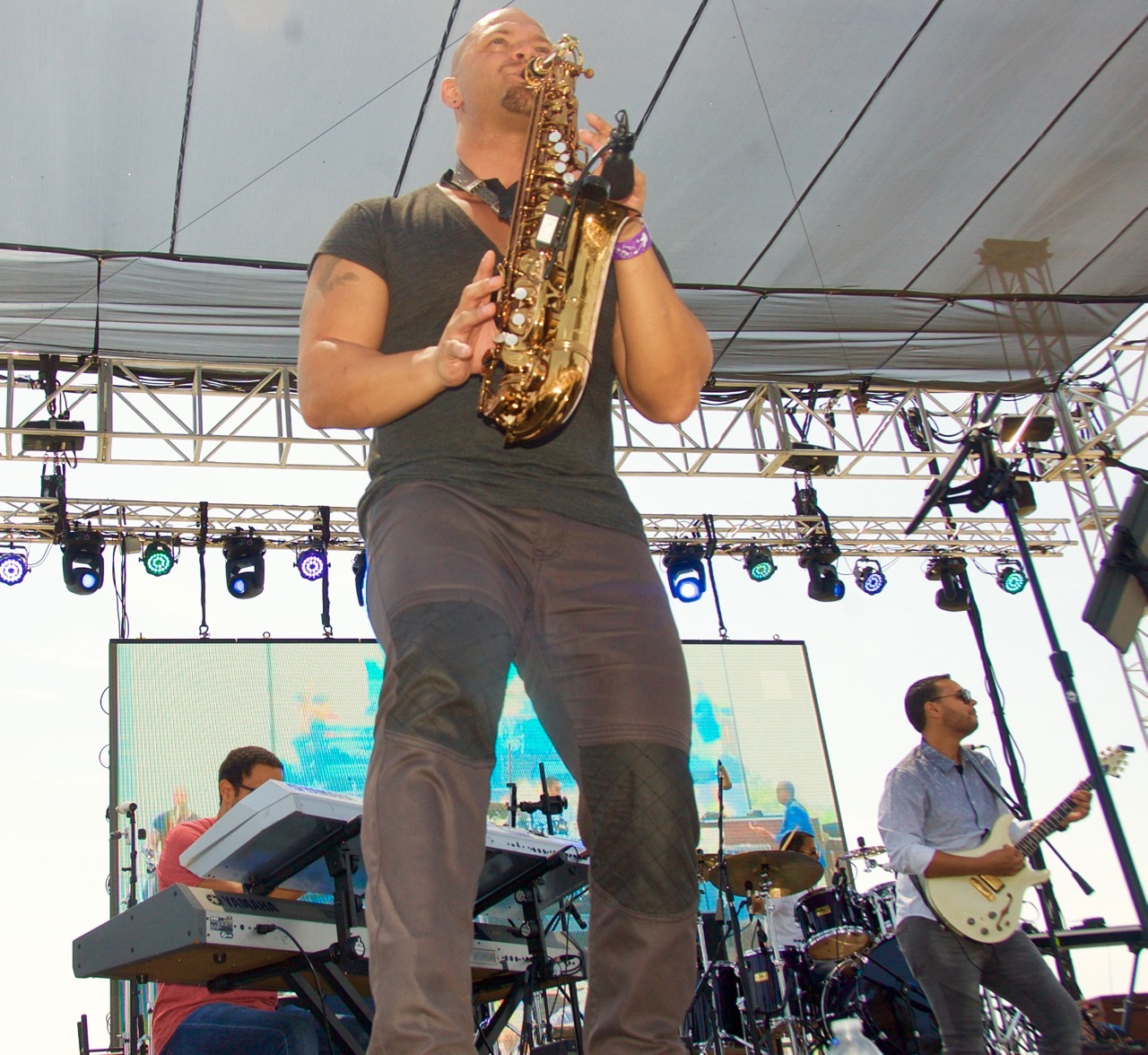 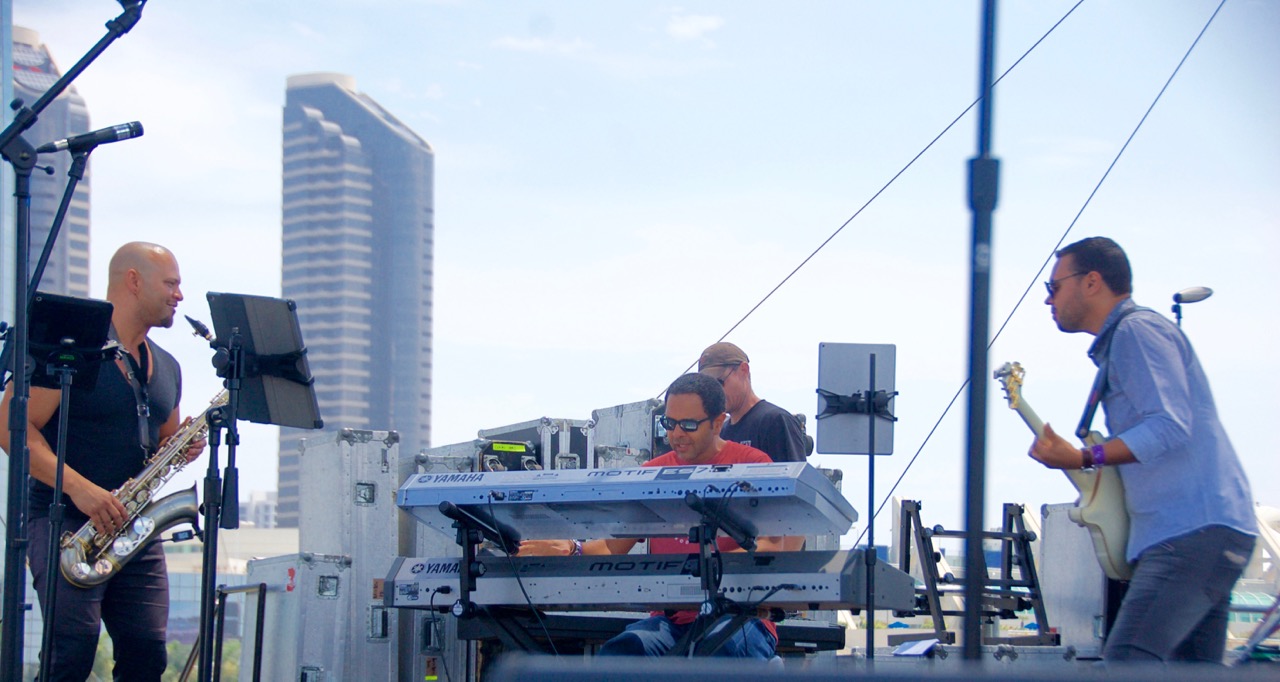 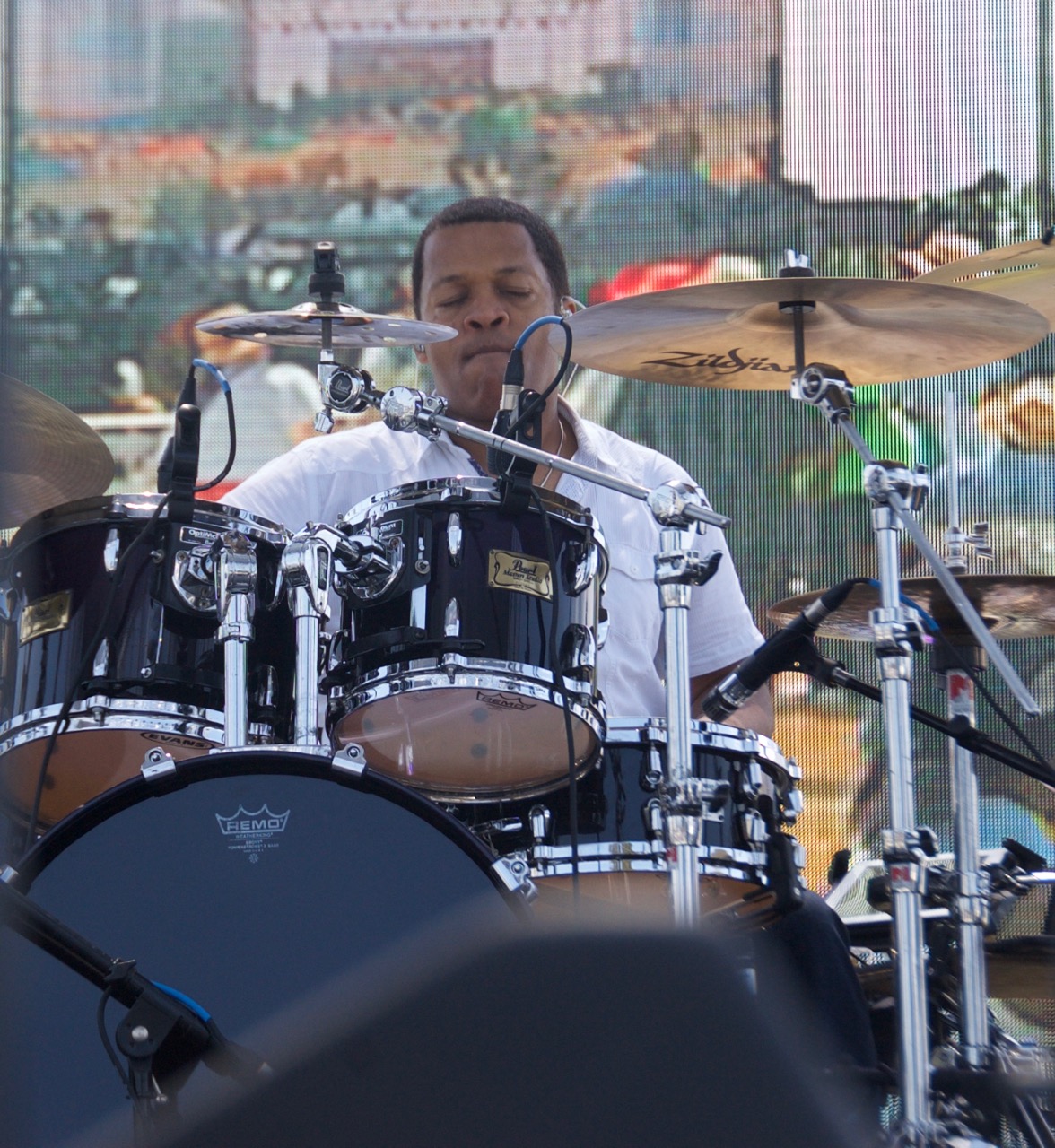 The L.A. Collective had a synergetic chemistry that detonated the stage as they began the afternoon of music at The San Diego Smooth Jazz Festival. Featuring guest artist, Keith Mitchell McKelley on sax, the band consisted of, Adam Hawley/guitar, Tony Moore/drums, Darryl Williams Page II, bass and Greg Manning, keys. The L.A. Collective launched themselves originally as a backup band on the 2014 Dave Koz Cruise to Alaska. They continued to work together throughout the years solidifying and evolving their unique magnetic sound. Each musician has also carved out very successful individual touring and recording careers.

The L.A. Collective puts out a mixture of jazz, funk, Latin, and soul. Today was no exception. We heard Keith Mitchell McKelley blow his wild potent licks on the sax that added weight to each song. Adam Hawley‘s furious dexterous strumming and picking galvanized the compositions and sent a jolt of playful imagination. There’s nothing like the turbo thumping of those bass strings by Darryl Williams Page II who cracked open the funky beat.  Greg Manning‘s finesse on the keys caressed the melodies with ingenious complexity. Lastly, Tony Moore pummeled the drums skyrocketing the LA Collective into the stratosphere of sizzling rhythm.

They featured songs from each musician’s body of work like “Sugar & Spice” (Greg Manning) and “Goodbye” by Darryl Williams Page II. The LA Collective was the perfect way to start off a superb day of music at The San Diego Smooth Jazz Festival. 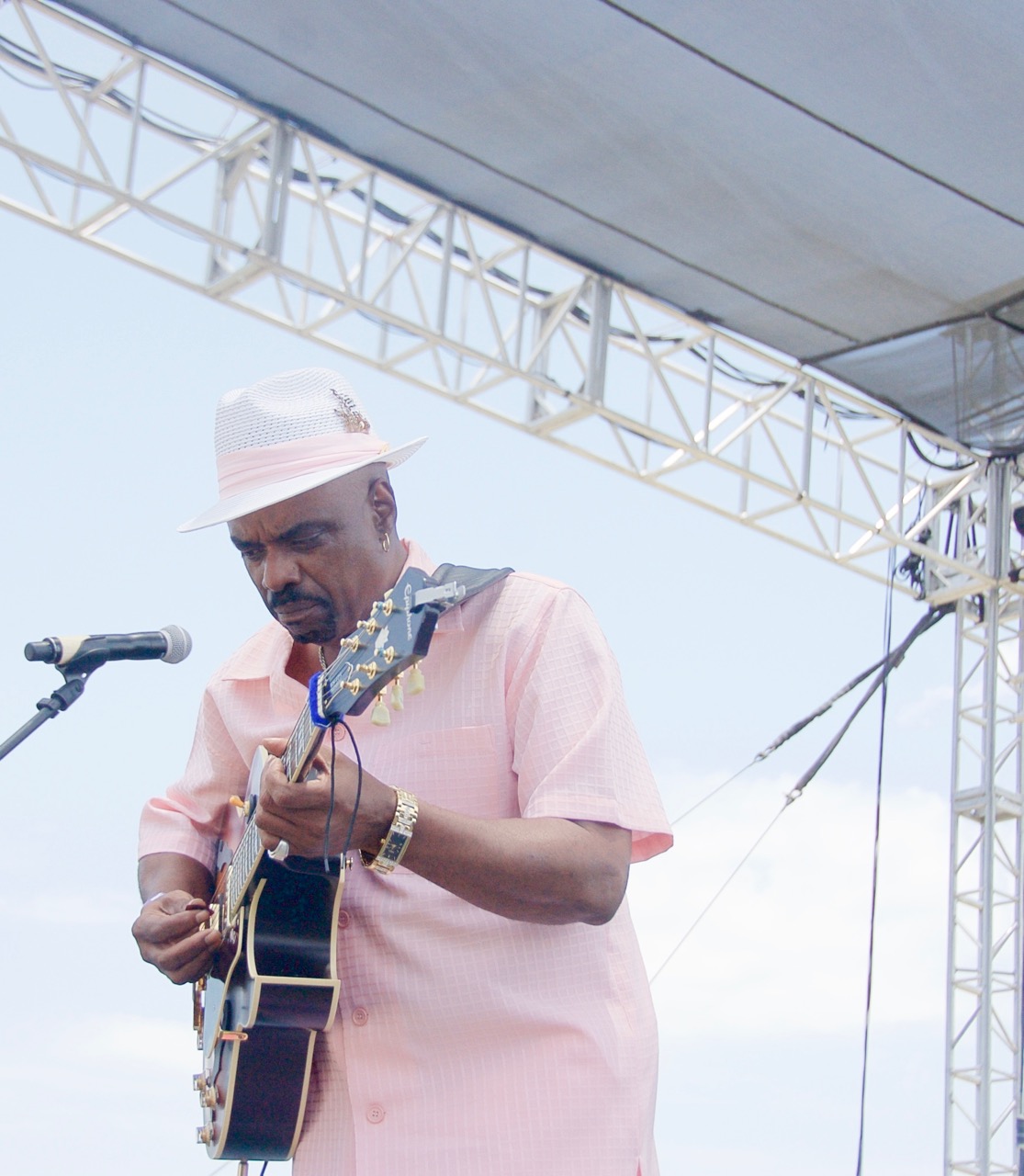 Nick Colionne purred, pranced, partied, and pulsated with wild abandon on the guitar while looking sizzling suave decked out in pink, as he performed at The San Diego Smooth Jazz Festival. Since 2000 he has toured U.S. and European festivals and has had a string of successful albums which contributed to his glowing reputation in the urban jazz music world.

When Nick Colionne crooned in his mellifluous, belly deep vocals, “A Rainy Night in Georgia,” the heavens parted … and we all received the lush, romantic pouring down raindrops of his gorgeous vocal talent. In the complete opposite direction, Colionne ripped up the guitar strings with freaky fast licks that were intoxicating and thrilling. Getting everyone in a party mood, Nick Colionne bounced off the stage and ventured into the crowd, inciting the flame of fun. He blasted the lyrics, “There’s a party going on,” over and over and the audience at the festival joined in.

With his hand on his hips, strutting his long legs in a down home bluesy way, Nick Colionne showed us all what a superb entertainer he truly is. 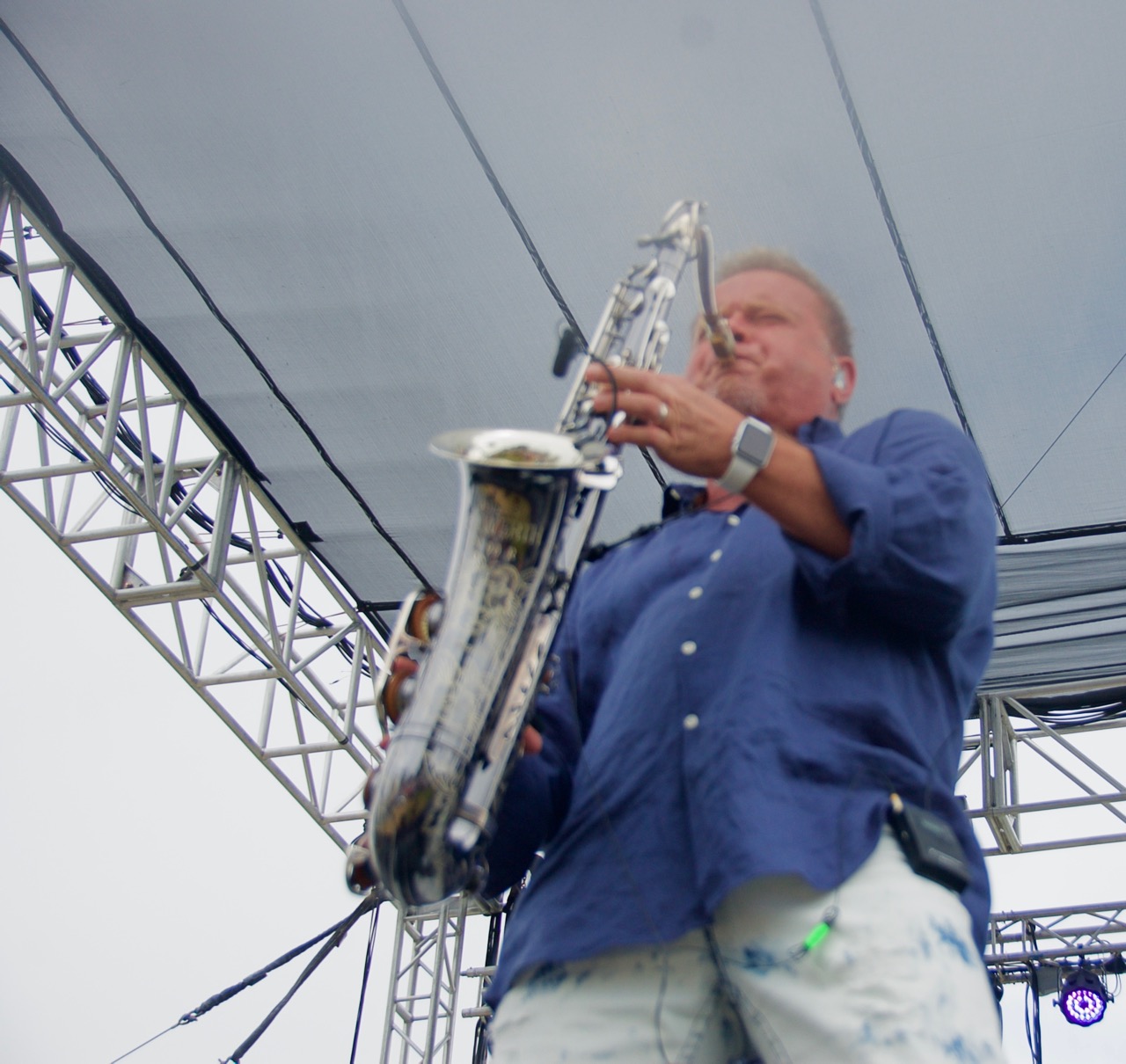 Keiko Matsui, Euge Groove, and Peter White performed together at The San Diego Smooth Jazz Festival highlighting each other’s fabulous music. This magical tapestry of sound delighted the crowd. The three musicians frolicked freely – Keiko adding her powerful chops on keys, Peter White twisted and turned rocking out on his white guitar, and Euge Groove thundered in solid form on the sax.

There were fun times for everyone listening.

Michael Franks was destined to be a songwriter even though he tried to venture down the road of academia to display his poetic writing skills. Franks has presented the Jazz/Pop Music world with a multitude of hit songs that are suffused with clever lyrics and capricious images, (Popsicle Toes being one of my favorites.) which are also underlined by cool, hip, swinging jazz compositions. He tells a story with metaphors, intelligence, and an intimacy that draws one in through his unique and lovely articulation of the song.

I found myself singing the familiar lyrics to “Rendezvous in Reno,” “The Lady Wants to Know,” and of course, “Popsicle Toes.” I captured a precious moment on Facebook Live with Michael Franks as I posed the question to him of how he wrote such interesting lyrics to his songs. He replied, “I studied a lot of poetry.”

We all have been the beneficiaries of that brilliant study… who else can write – She never cooks the same… my baby cooks eggplant 19 different ways… Eggplant is her game. Love it! 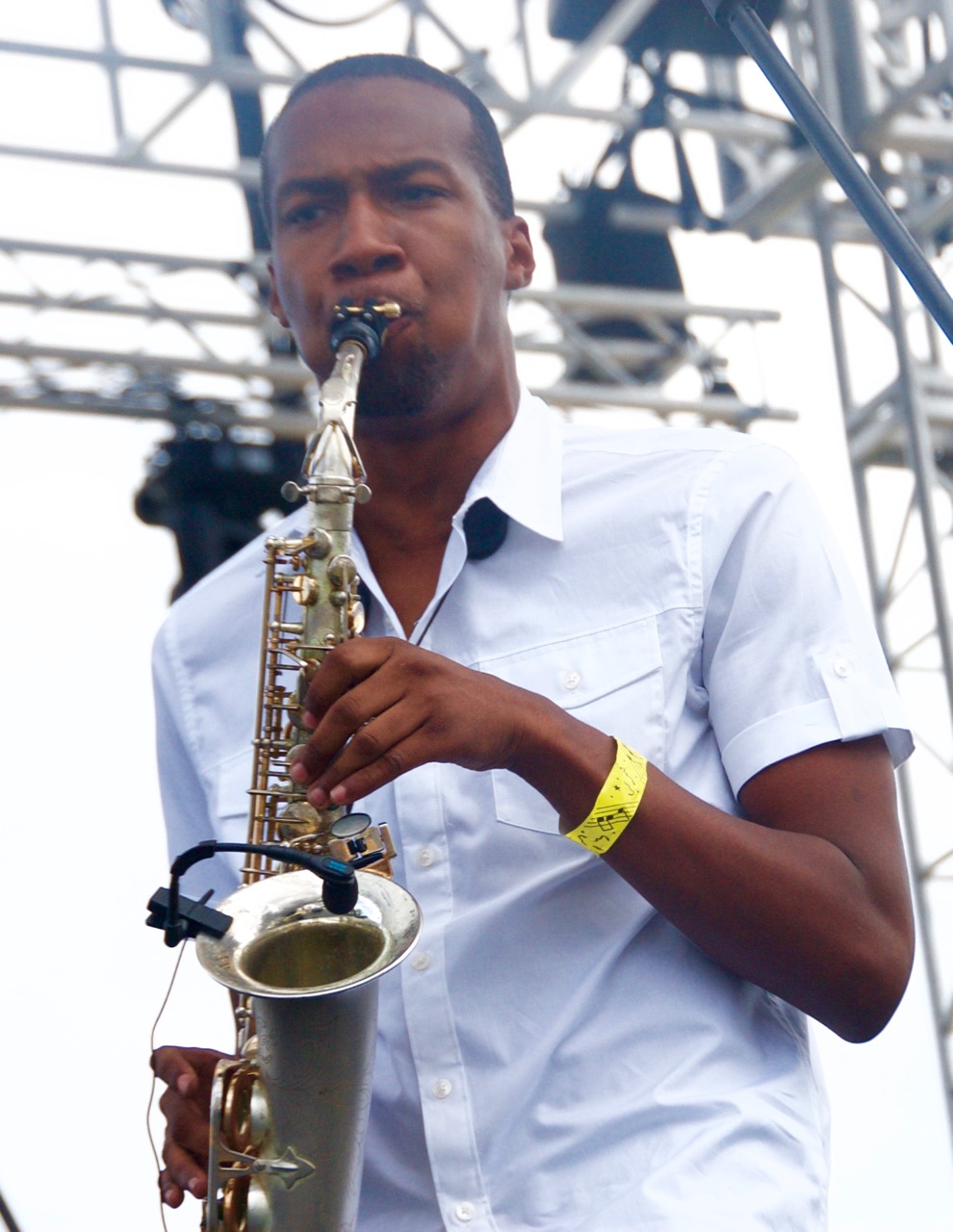 Curtis Brooks, a steaming hot sax player is only in his early twenties; however, he has sidelined for LA Collective, Peter White, Gerald Albright, Brian Simpson, and many others. Today he headlined a seven piece band featuring Monty Seward on vocals. Curtis Brooks told me in our Facebook Live interview that he wants to bring the sound of smooth jazz to the listening ears of his generation of young people. So he’s teamed up with a record producer … Irvin Pope who’s worked with Jay-Z and Kanye West. “I want to bring instrumental music to my generation because I know for a fact, they don’t listen to jazz,” he said. When asked about his style of playing, Curtis replied, “I bring everything from the heart and the audience feels the connection.” Lastly, who are some of his sax influences? “Some of my sax influences are Gerald Albright, Sonny Rollins, John Coltrane…” Curtis Brooks and his seven-piece band definitely brought their music home to this generation of listeners at the San Diego Smooth Jazz Festival.

I loved watching his passionate playing as he immersed his entire being into delivering his unique sound. 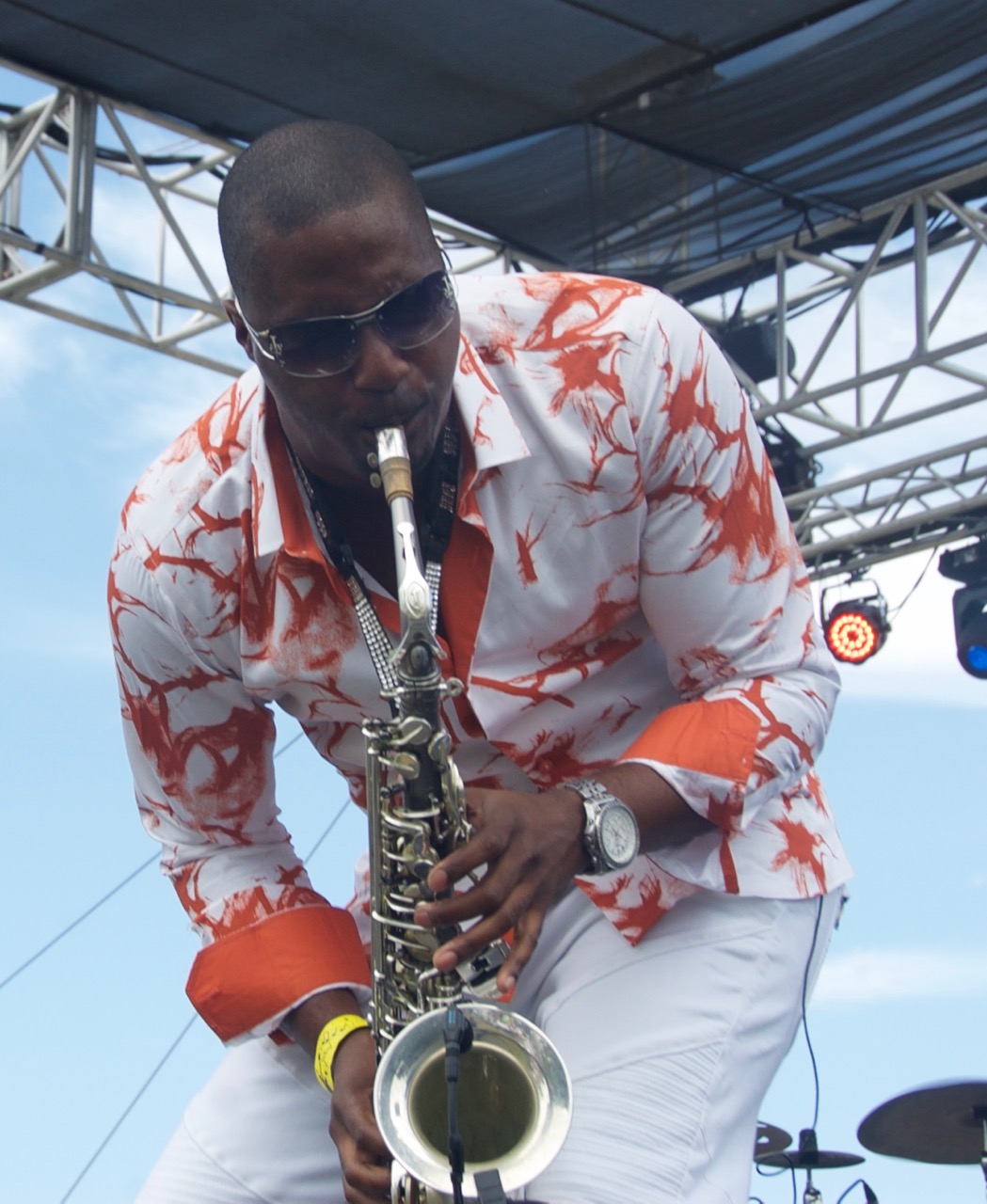 Eric Darius blew riff after riff of his luscious music as he performed the hour set at The San Diego Smooth Jazz Festival. The audience responded enthusiastically to Darius’s polished repertoire of songs. He presented his new single, “Breaking Through,” which will surely be another hit instrumental tune for this artist. Eric Darius is a top notch smooth jazz artist that has toured worldwide since his teens; he lent a sophisticated and energetic feel to a fabulous Sunday afternoon of music. 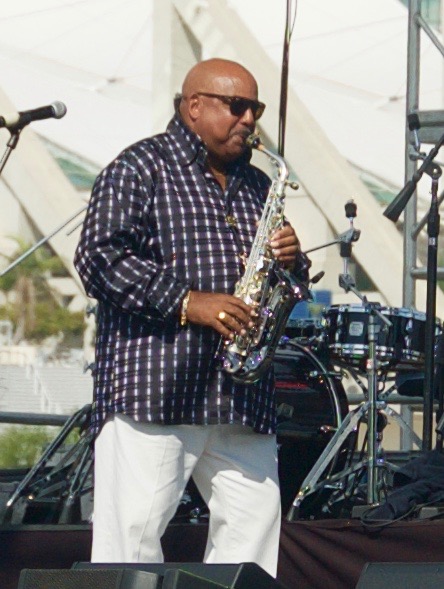 Gerald Albright told me in a previous interview, “I have developed my own sound over the years.  That makes me old school, that makes me contemporary, that gives the flavor of some of the R&B along with the jazz improvisation as well.  That’s what I feel comfortable with.”  He put together an impressive set of music that afternoon by stupefying the audience with his vast range of blowing from the lowest register to the highest.  Jonathan Butler, always the consummate soulful singer inspired the audience with his gospel vocals. Richard Elliot, Rick Braun & Norman Brown – West Coast Jam

These three powerhouses…  with Richard Elliot on sax, Rick Braun on trumpet and Norman Brown on guitar blasted the crowd with their pulsating and dynamic playing.

All these artists have had stellar careers in the smooth jazz world and it was a rare treat for everyone to experience their masterful mixture of chops that was termed the West Coast Jam…  major hip and cool chemistry between all three. 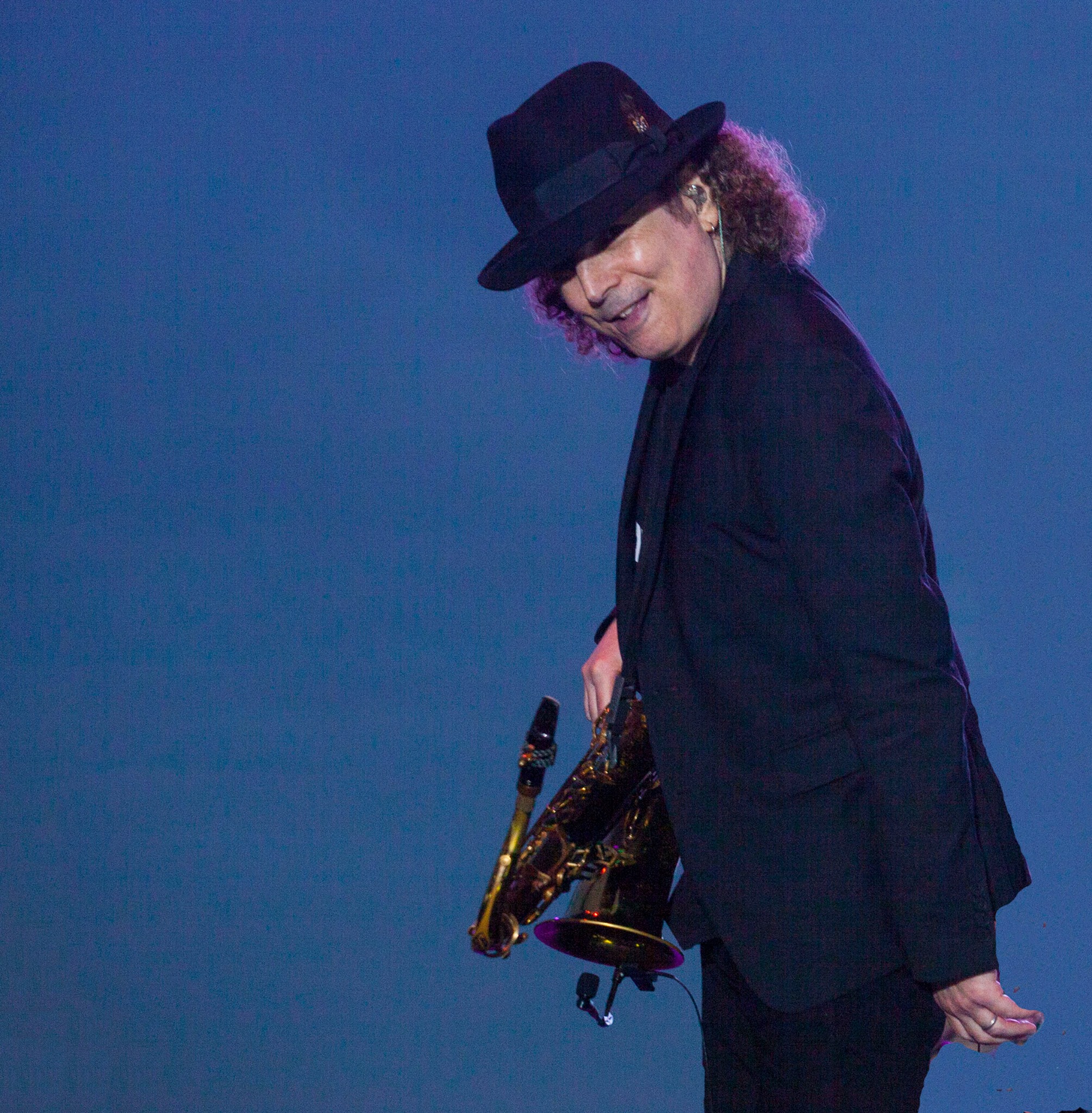 Boney James, four-time Grammy nominated sax player, ended the San Diego Smooth Jazz Festival with a sterling set of his best songs.  His melodic fusion of jazz and R&B enveloped the crowd.  The audience partied until the very last note was played.

Monty Seward Entertainment Consultant kicked off Saturday at The San Diego Smooth Jazz Festival, July 8th. He put the audience in the right frame of mind by first letting loose with a spunky and funky instrumental number; then displaying his fine-tuned falsetto vocals by rendering his own version of Stevie Wonder’s song, “If You Really Love Me.”Tony Moore, Darryl Williams Page II, and Keith Mitchell McKelley lent their sharp playings skills as they were part of his backup band.

Rainbow Promotions (who also put on the Long Beach Jazz Festival) had partnered with Kathy and Willie Payne to put on this fabulous weekend of smooth jazz.  They wrote in the brochure, “We are thrilled to be back in beautiful San Diego after a 12-year hiatus and we are so pleased to have as our partners, local business owners, Kathy and Willie Payne of Payne Pest Management.”

“We hope you enjoy to the max the full festival experience!”

The San Diego Smooth Jazz Festival definitely delivered a superlative celebration – hearing the finest music at a gorgeous venue.  It was the full festival experience.

Sponsors for the San Diego Smooth Jazz Festival were:

For more information on Payne Pest Control go to: