Nearly all gut-wrenching storylines, loveable characters, and iconic scenes in the history of Hollywood’s filmography have been, and continue to be, born in the mind of a writer. While impossible to completely deconstruct the thought process behind every scene and character, through the collaboration between the Writer’s Guild Association and Variety, an audience of nearly 200 arrived to the Writer’s Guild Theater’s 2016 Sublime Primetime panel and discussion to attempt just that. The Writers Guild of America, West and Variety gather the year’s Emmy nominated writers for a illuminating conversation on the season’s most talked-about episodes.

“What a special night we are here for; these are all Emmy-nominated writers from shows of great variety,” said Odenkirk, referencing the show’s span across drama, comedy, animated series. “It’s a great time for TV and tonight’s panel really shows that. I’m lucky to be in a well-written show by some great writers. I wish some of them were here but you know.”

Drawing laughter from the audience, Odenkirk’s subtle self-effacing joke kicked off the night’s discussion.  The discussion quickly delved into the motivation behind the shows, and Sarah G. Shapiro shared the poignant story that would eventually inspire the show “UnREAL,” a show dismantling the romanticization of reality TV shows.

Shapiro recalled working on “the Bachelor” and tirelessly editing these women until they seemed unstable for the sake of the narrative. She described the Bachelor’s environment as a cruel place where the women of the show were ritually manipulated and bullied.  After a few years of what Shapiro described as “destroying lives,” she packed her car and headed to Oregon to seek something different.

“I got to Oregon and really thought about what I wanted to talk about and write about and for me, it was being a feminist working on the Bachelor,” Shapiro said. “[It] was sort of like a vegan working in a slaughterhouse. That’s what I had to talk about.”

From the cruel culture of reality TV shows seen in the UnREAL, to the satirization of today’s political climate in Veep, to the limited series exploring the infamous trial of O.J. Simpson in “The People Vs O.J. Simpson,” many of the television shows represented on the panel are rooted in reality. Larry Karaszewski, writer of “The People vs. O.J. Simpson,” said he and co-writer Scott Alexander “didn’t realize people still gave a shit, really.” The two writers — who have known each other since their time as roommates at USC in the mid-1980s, only knew they wanted to explore the story, as they felt enough time had passed to examine the trial anew — but they worried the series would be seen as a mere period piece.

“The more we dug into it and having the horrible events like the death of Eric Garner and the Black Lives Matter happen and all of a sudden it didn’t feel like a period piece at all. It really felt like the stuff Johnny Cochran was talking about felt very relevant to what’s happening today,” Karaszewski said. “As we dug into it, the birth of 24-hour media and the gender stuff with Marcia Clarke…it felt like it was really speaking to what’s happening now.”

While shows are often seen by some as solely for entertainment, “UnREAL” and “The People vs. O.J. Simpson” take a shot at those assumptions, as they use their success as a vehicle for commentary on societal failures. These shows, while using their success for change, also serve as a reminder that Hollywood is not without flaw.  It was a question during the Q&A that started a discourse about some of Hollywood’s failures.

“My question is about female voice in writing, which is difficult for me as a white male,” said the man talking into the mic in the aisle. “Where [did] it start when you were writing and how [has it] evolved and where it’s at now with things like Amy Schumer and all these amazing female-driven characters in writing”

Peter Huyck, a writer on the series “Veep,” said as a man who writes for a show who has a female lead, he approaches characters as “a unique set of agendas and fears and the gender doesn’t even factor into it.” While a respectable approach, the conversation quickly turned into a discourse about the lack of diversity in Hollywood.

Earlier in the panel, Carolyn Omine, who has been writing for “the Simpsons” for 18 years, responded to Bob Odenkirk’s joke about being the only woman writer in a sea of 72 men. While Omine responded she was actually the only woman on the writing staff of 20, the number remained staggering — and it’s indicative of a larger, more troublesome trend. 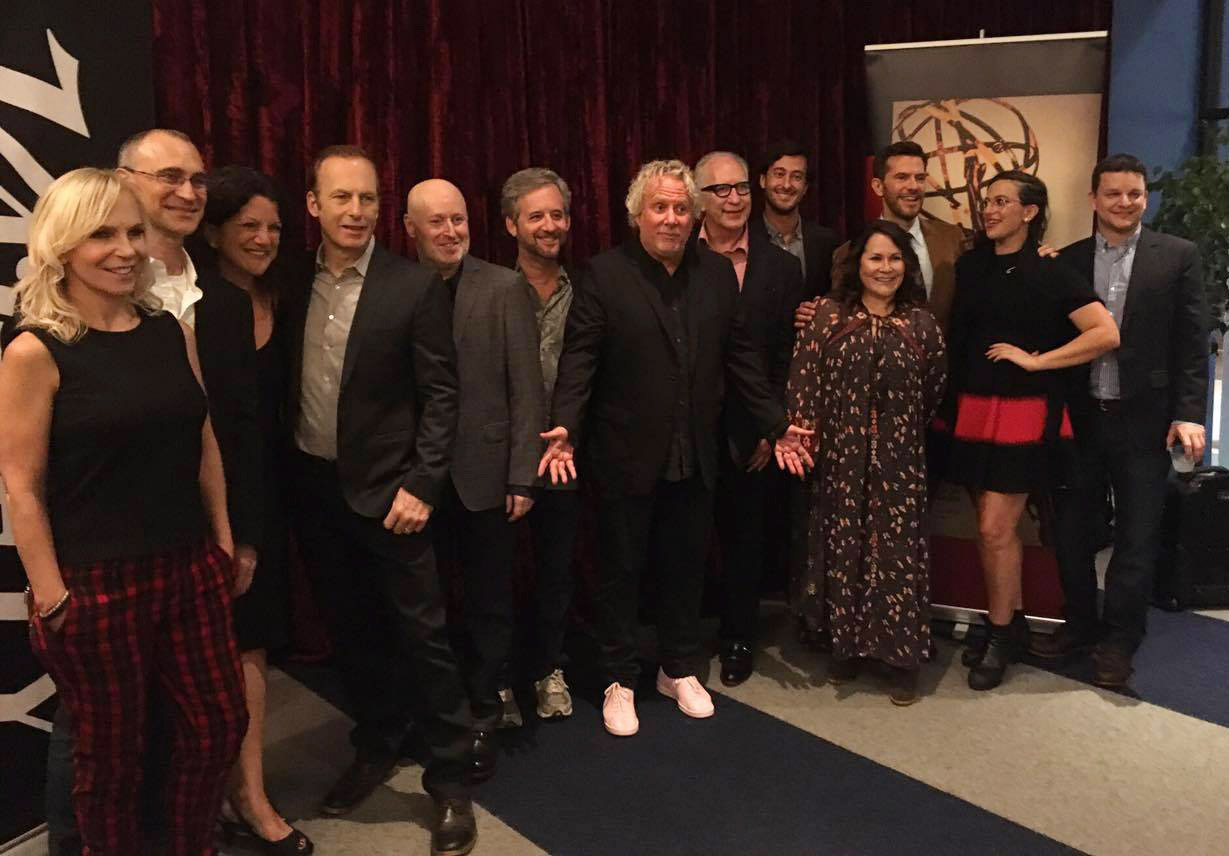 While the Emmys aren’t quite as “white” as the Oscars, only 25 percent of the nominations were non-white; however, Latinos were missing from nearly every category. When the population of people of color (POC) is growing at astounding rates in the U.S., the media and television shows are failing to accurately represent this change in the population, and this trend is not exclusive to our television sets. Alex Rubens, Emmy-nominated writer who has written for “Community,” “Key & Peele,” and “Rick & Morty,” reflected this sentiment as a response to the Q&A question, near the closing of the panel.

“Just in general there needs to be way more diversity in writer’s rooms. I wrote on Key & Peele and I was nervous about it because I’m this white guy,” Rubens said. “And my two answers about how to deal with writing for people who aren’t me are: number one, you really aim for the common humanity and try to focus. Then, two, don’t be just one white guy writing.” 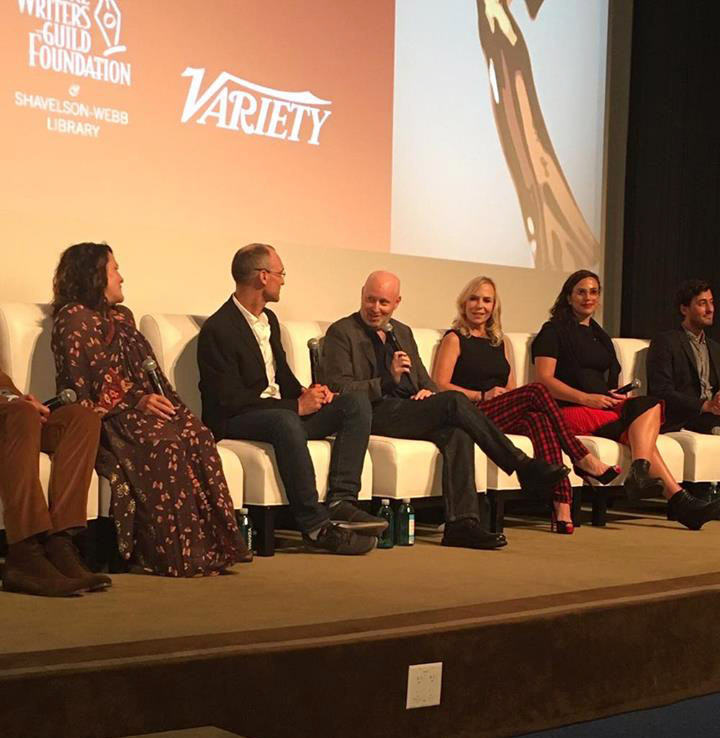 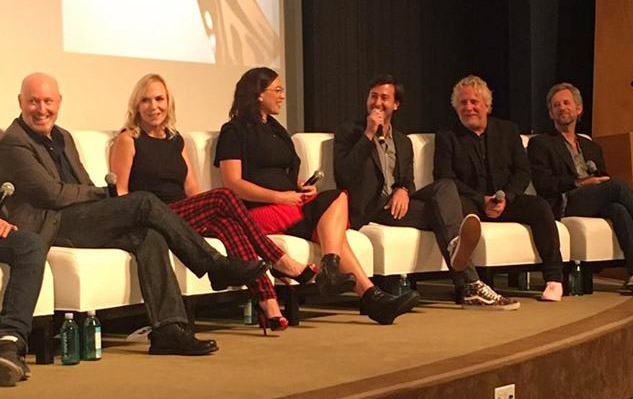 A night that had started with a roar of applause and a storm of flashing camera lights, ended with a single call for more diversity and the inclusivity of all genders in television. The writers and the audience shuffled into the Writer’s Guild Theater’s lobby mingling among each other. The air of anticipation of Sunday night’s Emmys filled the room and the night simmered to a close.

The Emmys took place Sunday evening, September 18th.   The Writing Awards for the Emmys were:

Writing for a Comedy Series: Aziz Ansari and Alan Yang, “Master of None” (“Parents”)

Writing for a Drama Series: David Benioff and D.B. Weiss, “Game of Thrones” (“Battle of the Bastards”)

The link to Sublime Primetime 2016 is: https://www.wgfoundation.org/screenwriting-events/sublime-primetime-2016/