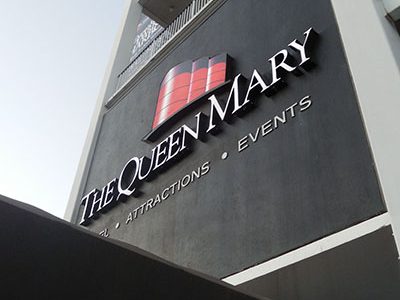 Long Beach, CA- Lyndie Greenwood, from FOX’s SLEEPY HOLLOW, ushered in the Halloween season Saturday night by bravely roaming through the new and terrifying Dark Harbor mazes, SOULMATE and B340. Along with a few adventurous journalists, Lyndie ventured aboard the Queen Mary through the spirit and monster filled mazes inspired by the haunted cruise ships infamous past.

The 1,000 foot Queen Mary has a quite a rich and historic past. The ship began construction in 1930’s in Clydebank, Scotland. The Great Depression caused construction delays, but in 1939 The Queen Mary launched it’ first voyage.

As the only civilized way to travel in its day, the ship hosted a long list of celebrity passenger from the Golden Age, Greta Garbo, Mary Pickford, Clark Gable to name just a few. It also hosted royalty and political figures, like The Duke and Duchess of Windsor and Winston Churchill.

The luxury liner was also used as a troopship and transport of prisoners during WWII. “The Grey Lady” as she was called survived D-Day and a collision at sea.

After years of service, the city of Long Beach California purchased The Queen Mary and because of a lack of air conditioning and age, she was turned into a museum and luxury hotel.

At least 49 reported deaths aboard the Queen Mary and 150 reported ghost sightings over the past 60 years has given the ship a rich paranormal history as well.

The SOULMATE maze is dedicated to Graceful Gale, the 1930’s first class Mistress of Queen Mary who is searching for her SOULMATE. Known for her graceful manner, dancing skills and her way with men, Gale’s final passage came in 1939 when she mysteriously vanished from the ship before it reached it its destination. Graceful Gale’s disappearance remains unsolved but her gliding spirit still haunts the ship dismembering souls to create the perfect dance partner.

The B340 maze takes you through the schizophrenic journey of Samuel the Savage’s decent into insanity. Walk through his insanity concluding where he met his untimely demise, Stateroom B340. Room B340 is no longer rented out because the numerous reports of paranormal activity.

When asked what her experience was while going through the mazes Lyndie said,” I am so easily scared. I love it so much. I was terrified, but I had a blast.” “I hope I never stop being scared.”

While relaxing in the Dark Harbor Creepy Cabana, after the maze tour, Lyndie told us that there were a few times that she was legitimately scared while filming on the set of Sleepy Hollow. During an upcoming Halloween week episode, her character, Jenny Mills, is trapped in a room with a monster that she said was terrifying.  Ms. Greenwood praised the talents of the makeup artists and designers on Sleepy Hollow, for creating such realistic and awesome creatures.

Lyndie shared with us her love for paranormal movies, her terrible fear of spiders and her love for Halloween. The Canadian born actress recalled  her dad helping her make her Halloween costumes and her attempt at making her own ghostly Halloween costume inspired by Peanuts and Charlie Brown ( a sheet with two holes cut out for the eyes).

“This show is something completely new and different from anything you’ve seen before,” Lyndie stated, “It’s a crazy show. It’s great that the writers, producers and cast have all come together to make this amazing show.”

What’s in store for us this season on Sleepy Hollow? “There have been more layers added to Jenny Mills over the season and her character will continue to develop. We just finished shooting the mid-season finale. It’s a big episode that will blow everyone away”, shared Lyndie.

Sleepy Hollow is filled with amazing demons and creatures along with addictive storylines. It  has just the right amount of horror and suspense that gets your heart rate going, without giving you nightmares.  A definite must see.

You still have a couple of weeks to experience The Dark Harbor mazes. They are filled with the ghosts and creatures who came close but never touch visitors. A fantastic way to experience the Queen Mary.