Due to popular demand, OLD 37 will be returning to Chiller TV with new air dates! After successfully screening at several notable film festivals (ComicCon’s Horror Fest, Horror Hound, Rock And Shock, etc.), premiering in select theaters across the country and airing on Chiller earlier this year, the indie-horror flick will be invading living room screens again on Wednesday, June 1st at 11am EST and Thursday, June 2nd at 3am EST. Mark your calendars and grab your popcorn — don’t miss your chance to see a group of careless, car obsessed millennials get tormented by two psychotic brothers searching for their mother’s hit and run killers while they pose as paramedics who intercept 9-1-1 calls in a beat up old ambulance. For more information and to watch the official trailer, please visit: www.old37themovie.com. 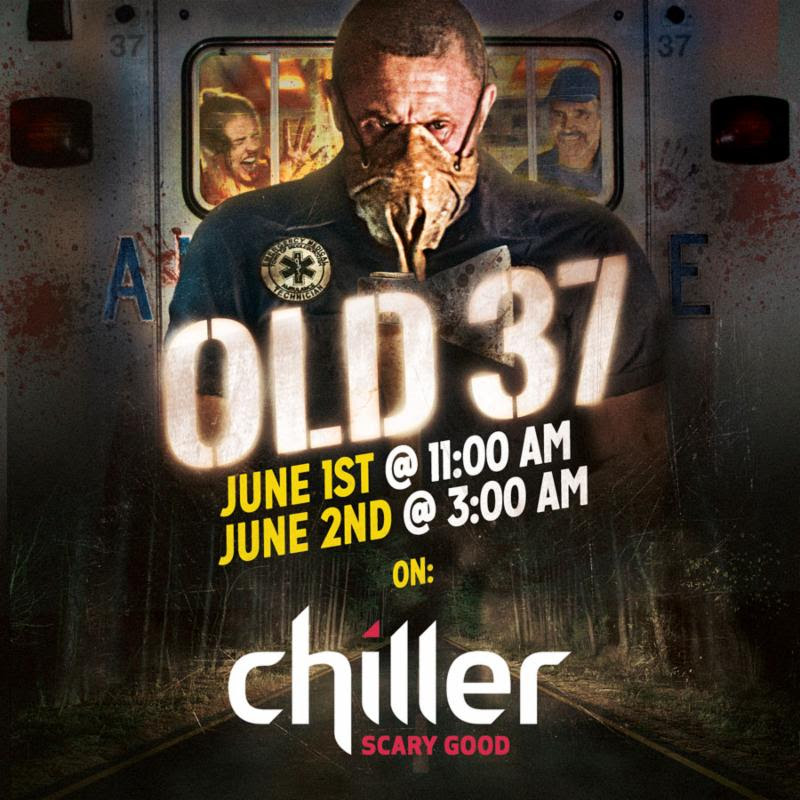 Chiller, currently available in over 40 million homes, is the only cable channel devoted to delivering viewers round-the-clock scares. Chiller’s eclectic slate of adrenaline-fueled, soul-stirring entertainment includes a broad offering of films, including feature length premieres every Friday, international programming, documentary and reality shows (Fear Factor), anthology series (The Twilight Zone), specials (Can You Survive a Horror Movie? and the ongoing “Chiller 13” countdown specials), classic series (Tales From the Darkside, The Outer Limits) and some of the most thought-provoking, suspenseful contemporary series that have aired in recent years (Pushing Daisies, Dead Like Me).

Dubbed as new and noteworthy on iTunes, indie-horror film OLD 37 is officially available for purchase on DVD (via Epic Pictures &Anchor Bay Canada). Thrill-seekers can pick up a personal copy in-store at over 2,400 Wal-Mart locations across the US! Alternatively, the film can be purchased on demand via Dish, Verizon Fios, Charter, Sudden Link, Media Com and many more to come! OLD 37 is also available to stream via iTunes (New & Noteworthy), Amazon Instant, Google Play (Top Horror Releases), Vudu,Vimeo, FlixFling, Xbox,Playstation and Hoopla.

OLD 37 is the last ambulance ride you’ll ever take. The film takes you on a journey through the lives of careless selfish teens (Brandi Cyrus, Olivia Alexander + more) and how two psychotic brothers (Kane Hodder + Bill Moseley) intercept emergency calls in their father’s old ambulance to perform their own heinous medical procedures. The two worlds collide. When a shy girl-next-door becomes their latest target, she turns the tables on her captors to fight for her survival. Fast paced and blood soaked, OLD 37 taps into the most basic human fear, vulnerability. The words “don’t worry I’m a paramedic” will make you think twice before dialing 9-1-1. Fans can take their first look into the film by watching the official trailer now, here:

OLD 37 was written and produced by Paul Travers, stemming from a nightmare he had. With music composed by Darius Holbert (Hobo With A Shotgun, World’s Greatest Dad, Cedar Rapids), and blood, guts and scares provided by Brian Spears and Pete Gerner (We Are What We Are, Late Phases, VHS), this team is bringing the sirens