“Gay rights are human rights, and human rights are gay rights,” former Secretary of State Hillary Clinton declared during a 2011 speech in Geneva. While the LGBTQ movement in the U.S. has great momentum, in places like China, those who advocate for gay rights and speak out can be harassed, intimidated and detained. Gatherings are banned, movies are censored and gay people are sometimes forced to undergo treatment to make them straight. 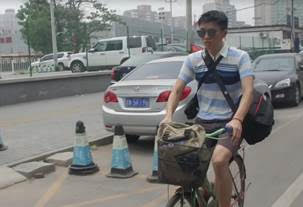 For China’s LGBTQ, the surveillance, intimidation, and even imprisonment of advocates is often coupled with stigmatization at home in a country whose national pride rests on 4,000 years of tradition. In a new one-hour documentary, FUSION TV’s award-winning investigative team examines what it’s like to be gay in China and the challenges LGBTQ activists face. “The Naked Truth: China Queer,” which airs during the final week of Pride Month, is narrated by actor Omar Sharif Jr. who currently serves as an Ambassador for the Human Rights Foundation and previously served as a National Spokesperson for GLAAD. Full bio below.

“The Naked Truth: China Queer” is the culmination of almost two years of reporting that includes exclusive undercover footage from a LGBTQ activist who works to expose clinics that try to convert gays with medically baseless therapy and a shocking recording of a man held against his will in a mental hospital for being gay. The documentary also features the first U.S. television interview with a gender rights activist after she was detained by the government for 37 days after planning a protest.

“Pride Month is not just a celebration, it is a call to action and awareness,” said Omar Sharif Jr. “With this documentary, FUSION opens our eyes to the challenges facing LGBTQ people in China— challenges that are not uncommon to those of us who continue to fight for equality and acceptance globally.”

Omar Sharif Jr. is an actor and activist. He has appeared in television series in Egypt and Canada. In 2015, Omar was hired by six-time Oscar nominated director Jim Sheridan to act opposite Eric Bana and Rooney Mara in The Secret Scripture. In 2016, they collaborated again on 11th Hour, with Salma Hayek, in an artistic response to the global politics of division. The film was selected by the Tribeca Film Festival in 2017. Shortly after the Muslim Brotherhood was elected to parliament in Egypt in 2013, Omar published an open letter in The Advocate, in which he came out as gay and half-Jewish and questioned the new Egyptian government’s commitment to basic human rights and diversity. He is the first public personality to ever come out as openly gay in the Arab World. He immediately faced a barrage of condemnation, criticism and threats of violence. Omar currently serves as Ambassador for the Human Rights Foundation and travels extensively promoting freedom. He previously served as National Spokesperson for GLAAD; an organization which serves to promote LGBT equality by ensuring positive media portrayals of the gay, lesbian, bisexual and trans community.

It's GLOW Time! Go Behind The Scenes Of The Netflix Original Series GLOW @GlowNetflix