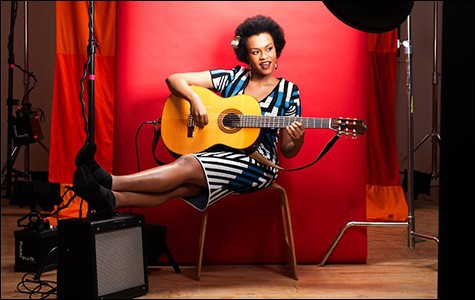 Ethiopian-American artist Meklit just premiered her new album When the People Move, the Music Moves Too at PopMatters, who said “With her latest masterpiece, Meklit has affirmed her place among her childhood heroes: at the shining crossroads of two cultures, making truly moving music.” The album will be released on June 23rd via Six Degrees Records, and it is currently available for pre-order HERE.

Last week, Meklit premiered her cover of The Roots and Erykah Badu’s “You Got Me” at Okayafrica. The song features New Orleans’ Preservation Hall Horns, anchoring the track around Meklit’s powerful brass arrangement, kicked off with a lithe solo by Ethio-Cali’s Randall Fisher.

Meklit also recently released her jubilant video for “I Want to Sing For Them All”, which premiered on Vibe.com and features Andrew Bird on violin. As Meklit describes, “‘I Want To Sing For Them All’ is my anthem… I am an immigrant… but I would not be who I am without jazz, and blues and hip-hop and soul. This music is Ethio-American, just like me.”

The album was teased by New York Magazine in their “Approval Matrix” feature, earning a coveted spot on the “Brilliant” end of the spectrum. The record was produced by Dan Wilson, whose previous work with artists including Adele, Taylor Swift and John Legend – as well as fronting the band Semisonic – has earned multiple Grammy awards. The album also includes Andrew Bird on violin and whistling, as well as New Orleans’ Preservation Hall Jazz Band horns. A vibrant and inspired mix of Ethio-Jazz roots along with American pop, R&B and folk influences, Meklit’s upcoming record crosses both musical and generational borders to create a unified artistic vision, united behind her unique and unmistakable voice.

When the People Move, the Music Moves Too is the result of a fateful encounter Meklit experienced in Addis Ababa with the legendary vibraphonist/composer Mulatu Astatke, who helped spark Ethiopia’s 1960s musical renaissance. She was deeply engaged with his music at the time, but he pushed her to think about how to bring her own experiences into her songs. “He was very pointed with me, saying several times ‘You keep innovating!’” she recalls. “He took me to task and he tasked me. It took me a while to digest that. It’s a big thing to have someone like that say that to you. I sat with it for a couple of years.”

Meklit has embodied multiplicity since she first started performing at San Francisco’s Red Poppy Art House in the mid-2000’s. Born in Ethiopia, she moved with her family to Iowa at the age of two, and spent much of her adolescence in Brooklyn, soaking up the sounds of hip hop on the street. After studying political science at Yale she spent several years in Seattle before moving to San Francisco, looking to immerse herself in the city’s thriving arts scene.

“I’m always thinking about America and Ethiopia, about how the hybridization is going to work in both places,” she observes. The lapidary orchestrations on her new record were created by Meklit herself, with the help of her bassist Sam Bevan. But Meklit is quick to credit Dan Wilson’s lithe musical mind with a major role in shaping the ultimate sound of the record, in addition to his contribution of co-writing two songs. A prolific songwriter, arranger and producer, Wilson seemed to know exactly which player to place where to accentuate Meklit’s sound. He brought in Ethio-Cali’s tenor saxophonist Randall Fisher, who plays a perfectly calibrated Ethio-jazz intro on “You Got Me.” And Ethiopian-born, LA-based keyboardist Kibrome Birhane’s spare piano work levitates “Yesterday is a Tizita.” Meklit describes how Wilson’s songwriting precision, and razor sharp, generous feedback helped to weave a remarkable clarity into the music, enhancing Meklit’s already vivid hues.

Since the release of her acclaimed 2010 debut album On A Day Like This… (Porto Franco Records), Meklit has become an international force. Both a 2009 TED Global Fellow and a 2012 Senior Fellow, you can watch her 2015 TED talk “The unexpected Beauty of Everyday Sounds” HERE. Meklit is the co-founder of both the Nile Project and the Arba Minch Collective, has been a featured voice in the UN Women theme song One Women, collaborated with musical legend Pee Wee Ellis, been commissioned to write music by Lincoln Center for the Performing Arts, served as an artist-in-residence at NYU, led multiple creative residencies in Manchester with the arts powerhouse Brighter Sound, inaugurated the UN Campaign for Gender Equality in Africa with a concert in Addis Ababa, and sits on the board board of Yerba Buena Center for the Arts.

1. This Was Made Here

2.I Want To Sing For Them All (featuring Andrew Bird)

4. You Are My Luck (featuring Preservation Hall Horns)

6. You Got Me (featuring Preservation Hall Horns)

7. Yesterday Is A Tizita