The Hollywood 360 hit the floor running on Friday, January 20th at NAMM 2017 held at the Anaheim Convention Center.  Time to pull out the camera, the phones, and get the latest news on the musicians, instruments/equipment, and listen to astounding music, as we wandered through the humongous exhibit halls.  The thousands of exhibitors flood the floors of the Convention Center with over 6,000 brands.

From morning until the evening hours, music blasts from every corner – concerts from every genre of music are being performed, to individual musicians trying out new equipment, to musicians promoting the brand they sponsor.  NAMM is the ultimate candy store, where one’s taste buds are continuously being tantalized. Last year attendees hit 101,726.  However, there’s an intimacy of experience awaiting all.

My favorite activity at NAMM is interviewing the artists.  They descend from all over the world. Everywhere I turn, I run into my friends who I’ve had the opportunity to cover in The Hollywood 360 either in a feature story or a review of a concert performance.  I also find new opportunities with musicians I am meeting for the first time.  A journalist’s dream! 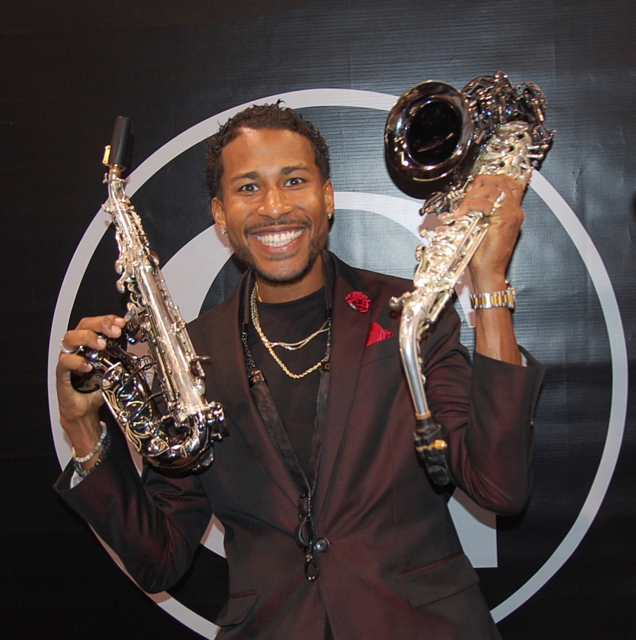 I have seen J. Boykin perform at the 20th Anniversary Party of Cannonball Instruments NAMM 2015 and at Patte Purcell’s Jazz Concert Series.  Not only does this musician blow with some funky, lightening chops, Boykin also displays some of the best waggish positions to play his sax.  He’s been known to jump on tables and lie flat on the ground without missing a beat.  His demeanor always reflects a joy and playfulness.

Boykin, has been called the “Sax Sensation.” He has played with and opened for Frankie Beverly & Maze and Ledisi, John Legend, Take 6, Kirk Whalum, Doc Powell & Brian Culbertson. Other credits are appearances on Fox Televisions “Glee” and J.’s “Happy” video was spotlighted when Oprah interviewed Pharrell on Oprah Prime. 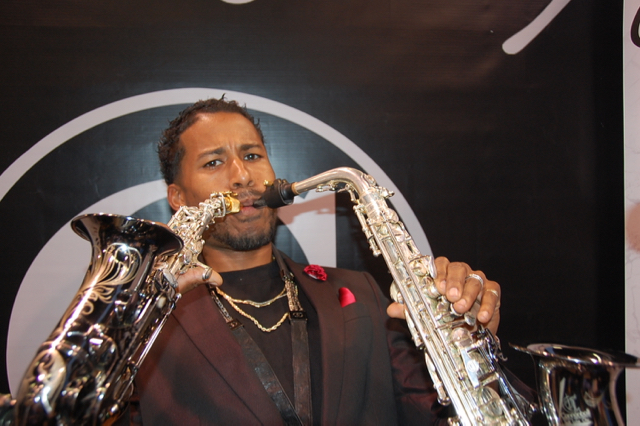 The Hollywood 360:  Tell me what you’ve been doing musically?

Boykin: I’ve been busy playing in Vegas. I did a backstage venue for a Snoop Dog Concert and a few of the artists backstage. I just finished my album.  Looking forward to releasing the album sometime in March.

Boykin: It is called “Street Lights.” It was inspired by my Mom when she used to tell me to be home before the street lights come on.

The Hollywood 360:  Who endorses you here at NAMM?

Boykin: I am a Cannonball Artist. Those are my folks. Legere Reeds have supported me a lot.

The Hollywood 360:  What else would you like to say about “Street Lights?”

Boykin: This is an album that I wrote from scratch. I’m singing, I’m rapping, I am playing the sax…there is a live horn section. Really eclectic.   It will be on Pandora as well. 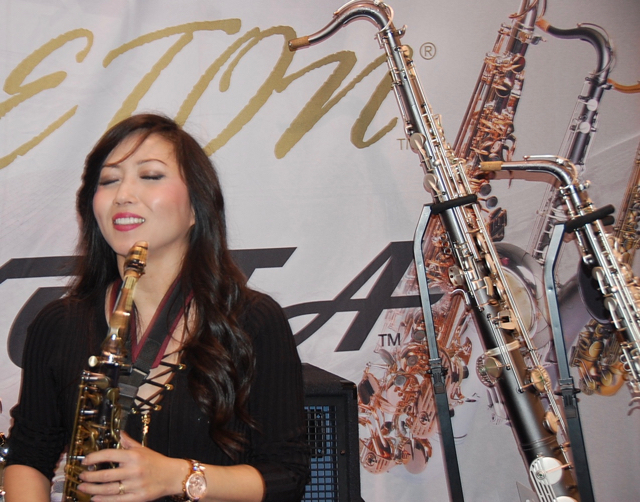 Tomoka Nomura-Jarvis is a contemporary jazz saxophonist who plays with the bands, Saxations and Jazz in Pink.

The Hollywood 360: Talk about the company here that endorses you.

The Hollywood 360: How long have you’ve been with the company? 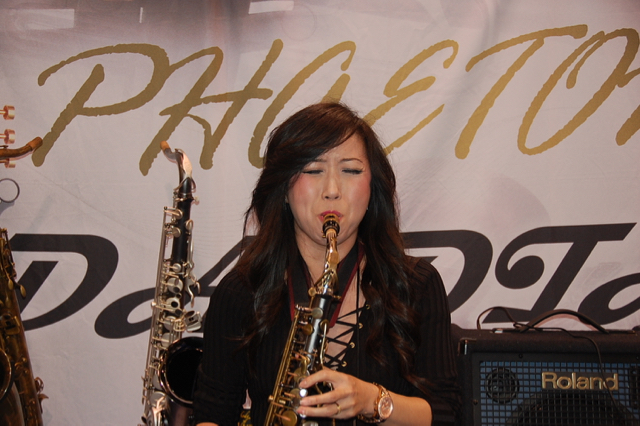 The Hollywood 360:  What are you up to musically?

Tomoka Nomura-Jarvis:  I am going to play with the band Saxations tomorrow right here.  I also play with Gail Johnson in Jazz in Pink.  Tomorrow I will at the NAMM JAMM show at Spaghettini. 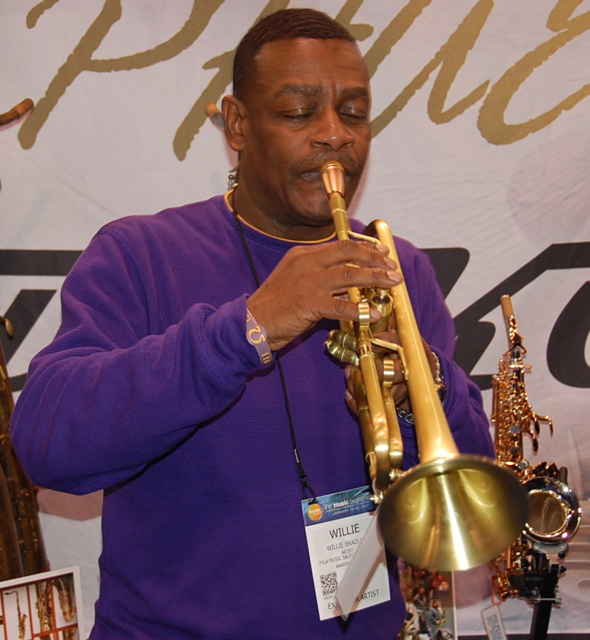 Willie Bradley has a smooth sophisticated sound on the trumpet.  He has studied and played with the legendary Dizzy Gillespie, who he sites as one of his biggest influences.  Willie has also played with Clark Terry, Max Roach, Betty Carter and Nat Adderley.  Bradley also has played in the funk band Big Bertha and from there formed the Willie Bradley trio that features Cornell Young (drums) and Ted Ash (keyboards).

Willie Bradley has also launched a solo career on the trumpet and released his CD called “Another Day & Time.” He hails from Fayetteville, North Carolina.

The Hollywood 360:  Who is endorsing you Willie here at NAMM?

Willie Bradley: I am representing Phaeton Trumpets and Sax Dakota.  I was endorsed by them two years ago.

Willie Bradley:  I am working on a new CD project that will be released late in March or early April.  It is being produced by Preston Glass and will be called “Don’t Look Back.”

The Hollywood 360:  Where are you recording the music?

The Hollywood 360:  Where are you playing now?

Willie Bradley:  I will be playing with Rick Parma on January 27th at the Cerritos Performing Arts Center and I will be playing Jazz at the Mansion with Patte Purcell on January 29th and with Marion Meadows in Santa Barbara on February 4th.  And I just got booked for the Carson Jazz Festival and will be there on October 7th.

Be on the lookout for all these musicians in future concerts and with upcoming CD Releases.