No one was better at hilarious, neurotic, over-the-top hysteria like Gene Wilder which he honed most notably in his film collaborations with Mel Brooks, which included accountant Leo Bloom in the 1968 satirical comedy,”The Producers”, the burned out Waco Kid in the 1974 satirical Western comedy,”Blazing Saddles.” and as Dr. Frankenstein’s grandson in the 1974 horror comedy, “Young Frankenstein.”

But it was in 1971’s film classic, “Willy Wonka and the Chocolate Factory,” where he touched audiences with his role as the unpredictable candy man, Willy Wonka.

In 1984, he married his third wife, “Saturday Night Lives”, Gilda Radner, who after only 5 years of marriage, would succumb to ovarian cancer in 1989. He went on to establish the Gilda Radner Ovarian Detection Center at Cedars-Sinai Medical Center in L.A. to screen high-risk candidates and run basic diagnostic tests. Two years after Gilda’s death Wilder would marry Karen Boyer, who he called the “love of his life,” and who remained with him until his death.

He was born Jerome Silberman in Milwaukee, and at the age of 12 he began to study acting. He earned a B.A. from the University of Iowa in 1955, and enrolled in the Old Vic Theater School in Bristol, where he learned acting technique and fencing. When back in the U.S. he taught fencing while studying with Herbert Berghof’s HB Studio and at the Actors Studio under Lee Strasberg.

He built a career as an actor, screenwriter, novelist, and director, who always said of himself, that in his private life, he wasn’t a funny man.

But it was as an actor that Gene Wilder left us his most memorable moments, with his wild hair and sparkling eyes forever imprinted in our hearts and funny bones. In his memoir, he asked himself a question about his life’s work and then preceded to answer it:

“What do actors really want? To be great actors? Yes, but you can’t buy talent, so it’s best to leave the word ‘great’ out of it. I think to be believed, onstage or onscreen, is the one hope that all actors share.” 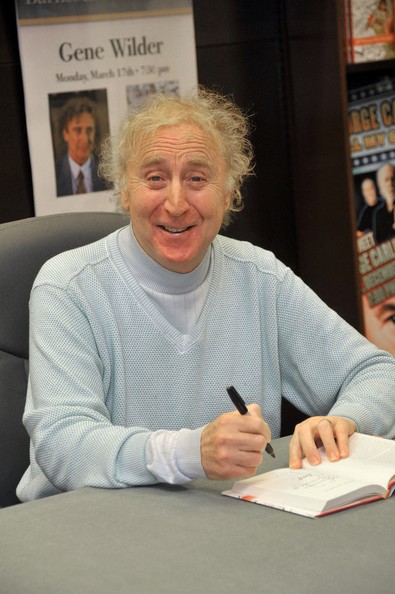 His nephew said in a statement, “We understand for all the emotional and physical challenges this situation presented we have been among the lucky ones — this illness-pirate, unlike in so many cases, never stole his ability to recognize those that were closest to him, nor took command of his central-gentle-life affirming core personality.”

Mara Wilson's U.S. Book Tour Dates For Her Memoir 'Where Am I Now?' from Penguin Books